Still in the hands of its original owner, this mid-year big-block convertible sports a 502-cubic-inch V8 and a host of other mods. 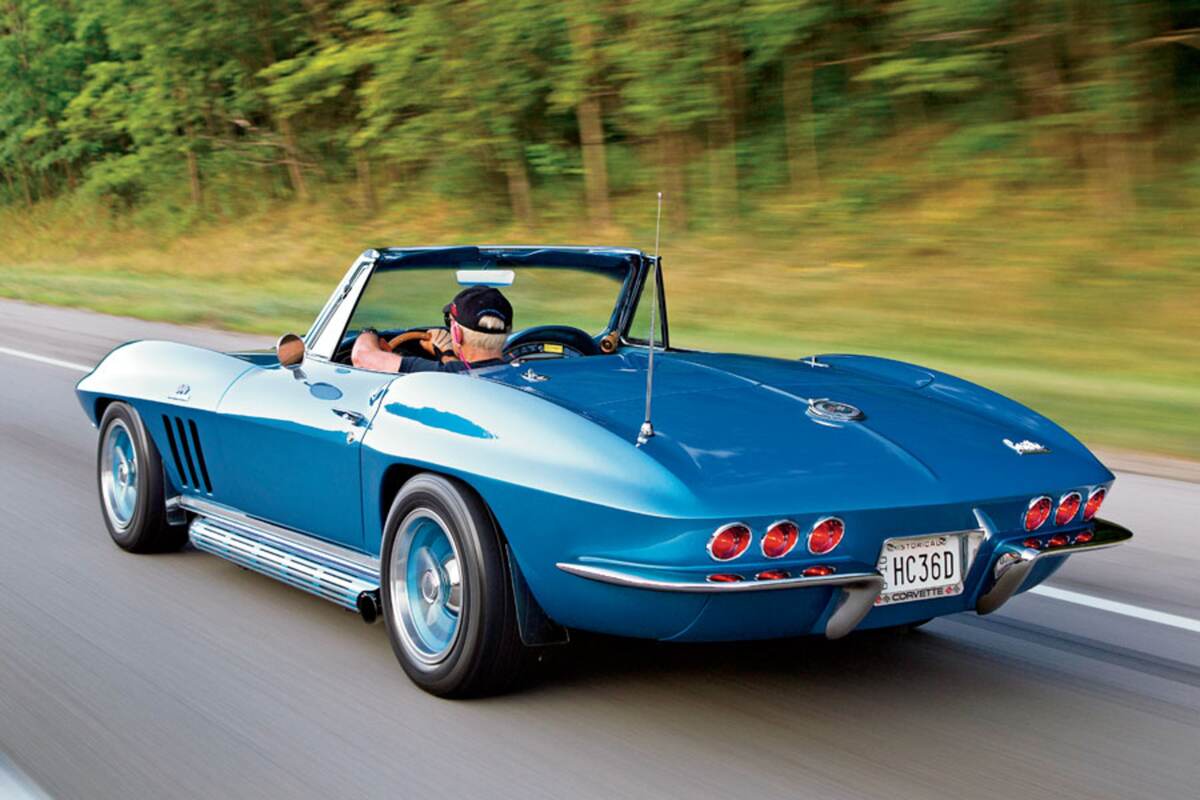 Brock Landers traces an interest in cars back to his earliest childhood memory, which happens to be of his family’s Buick. “Like most kids, I took up the Buick banner because that was what my father drove,” says Landers. This was all well and good early on, but when he reached driving age it presented a problem. “Buicks were not cool!” he exclaims. “My first car was a 1956 Buick Century. I was in college and all of my non-college friends had Corvettes, and I absorbed a good deal of razzing each time I would show up at the local Manners Big Boy restaurant in North Olmsted, Ohio.” The good-natured but incessant harassment took its toll, so Landers hatched a plan to bring it to a halt. “I finally reached a breaking point and bought a used 1963 Corvette roadster,” he says. “The only reason for this purchase was to prove what a piece of junk this model really was, but after two weeks, I fell in love with it!”

Landers enjoyed the ’63 droptop for the better part of a year before selling it. Then, on February 25, 1966, he walked into Fairchild Chevrolet in Lakewood, Ohio and made his first new-car purchase: a 1966 Corvette convertible. And not just any convertible, but one equipped with a 427-cubic-inch big-block V8. This 390-horsepower engine was connected to a 4-speed manual gearbox with a Positraction rear end. The car was loaded with options, including aluminum knock-off wheels, power steering and windows, side exhaust, an AM/FM stereo and tinted glass.

Landers immediately pressed his Corvette into duty. He drove the car back and forth to work every day, on vacations to California and Florida and on ski trips to New York and Pennsylvania. Landers soon joined Corvette Cleveland, one of the oldest Corvette clubs in the United States, and got involved with its many activities, including racing. “I raced the car at local club events at Nelson Ledges and Mid-Ohio, and had a lot of fun with it doing that,” he says. 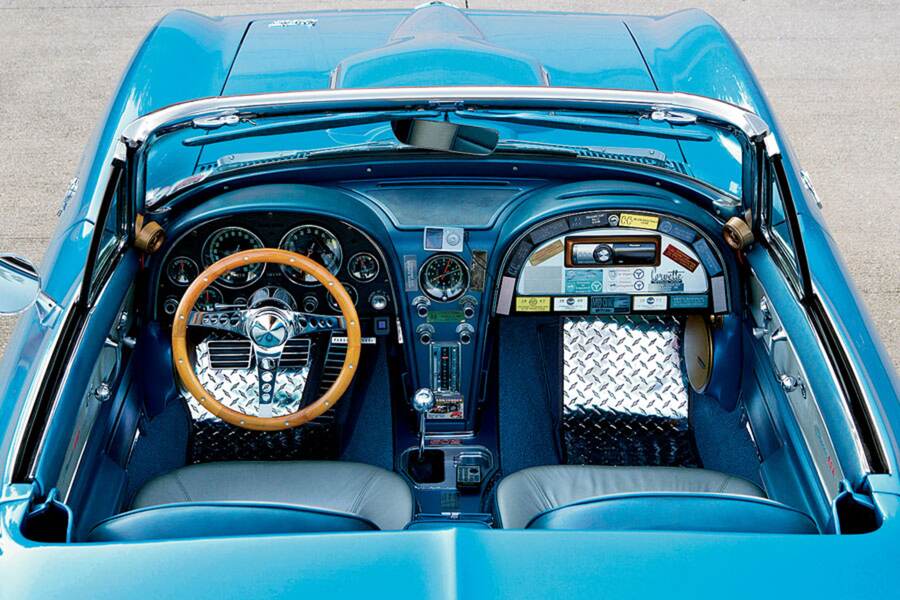 Though Landers used his Corvette as a daily driver and raced it on the weekends, he was obsessed with maintaining and preserving it. “I always managed to flush out the frame with water and remove the salt after driving the car in winter,” he explains, “and that’s why the frame is still in excellent condition.”

Landers stopped racing the Corvette in 1969 and got more involved with displaying it at car shows. At the same time, he continued driving the convertible regularly—at least until 1976, when he bought a high-performance jet boat. “The engine powering it was a big-block Chevy, of course,” says Landers. “A 461 with nitrous and many other speed enhancers that brought the boat’s top speed to just shy of 90 mph from the stock boat’s maximum of 71 mph.”

All of that fun on the water led Landers to spend very little time with his Corvette, and for the next quarter century he drove it only a few hundred miles per year. Then, in the late 1990s, a friend he used to race with organized a reunion of the old racing gang and showed the group his disassembled 1969 L89 convertible, which he was in the midst of restoring. In 2000, Landers saw the same car resurrected to its former glory; that gave him the motivation to restore his ’66. But he decided to take a turn away from originality with the project. 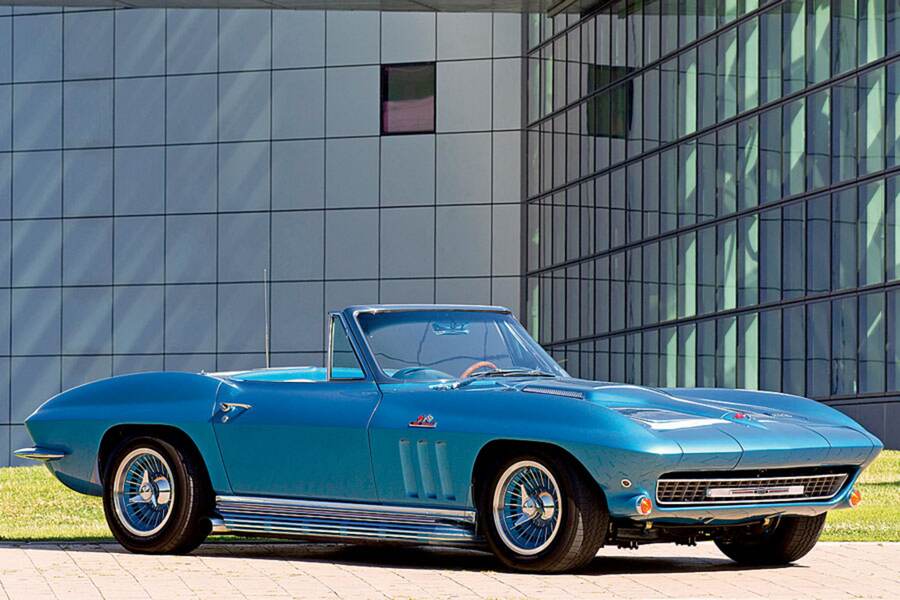 “I thought about what I’d like to accomplish,” Landers explains, “and decided to turn it into a restomod. This decision was made when the genre was not nearly as popular as it is today, but I was more interested in making myself happy and was not concerned with what a prospective future buyer might like.”

Landers planned his attack very carefully, mapping out projects for each winter that would move the process forward in logical increments while making sure

the car was once again drivable each summer. “The idea was to improve the car in every way I could and eliminate all of the poor workmanship and flaws in the basic design,” he says. 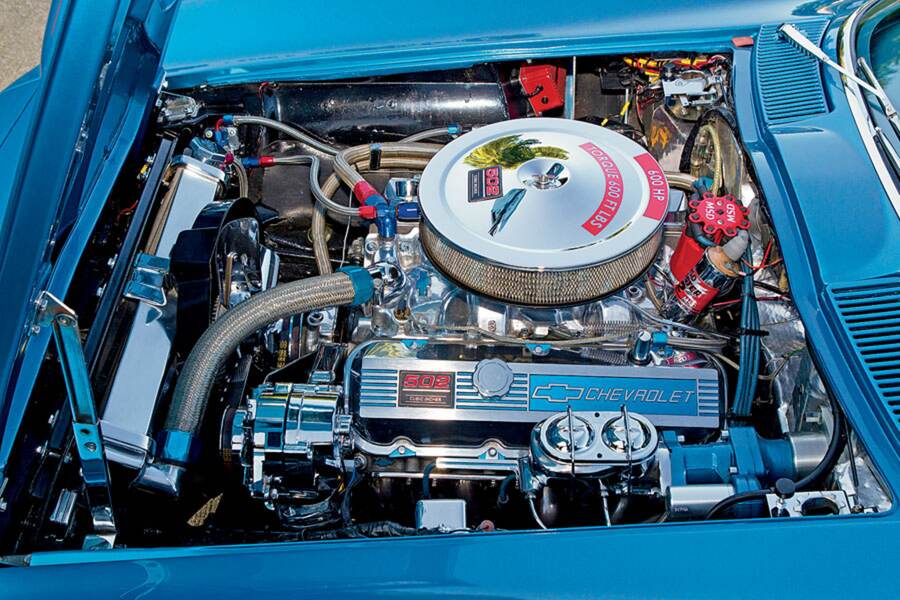 The car’s original L36 mill was set aside in favor of a GM Performance ZZ502 crate engine modified with ported cylinder heads and a hotter Crane roller cam. An 850-cfm Holley carb and 140-gph Holley electric fuel pump deliver fuel while an MSD setup provides spark. Custom-made, stainless-steel headers with 2-inch primaries and 3-inch collectors dump exhaust gases into 3.5-inch side pipes with Spiral Turbo Specialties mufflers. A stock 5-blade engine fan is supplemented by a “pusher” fan on the intake side of the aluminum Be Cool radiator.

As with the engine, the car’s original Muncie wide-ratio 4-speed manual transmission was put into storage and a Classic Chevy Tremec TKO 600 5-speed took its place. The updated gearbox sports a 0.64:1 overdrive for fifth, giving reasonable fuel economy on the highway with no shortage of acceleration off the line. A custom lightweight driveshaft brings the engine’s twist back to the stock 3.70:1 Positraction rear end.

Landers and longtime friend Fred Kubiak, a local Corvette racer from the ’50s who played a major role in the project, turned to Vette Brakes for suspension parts. Adjustable polyurethane springs front and rear, polyurethane bushings throughout, the largest anti-sway bars available for the car and Bilstein gas shocks deliver the mix of handling agility and ride quality Landers sought. “The new suspension enabled us to lower the car three inches in the front and two inches in the back,” he tells us, “which totally cures the front end lift over 120 mph that plagued all mid-years!” 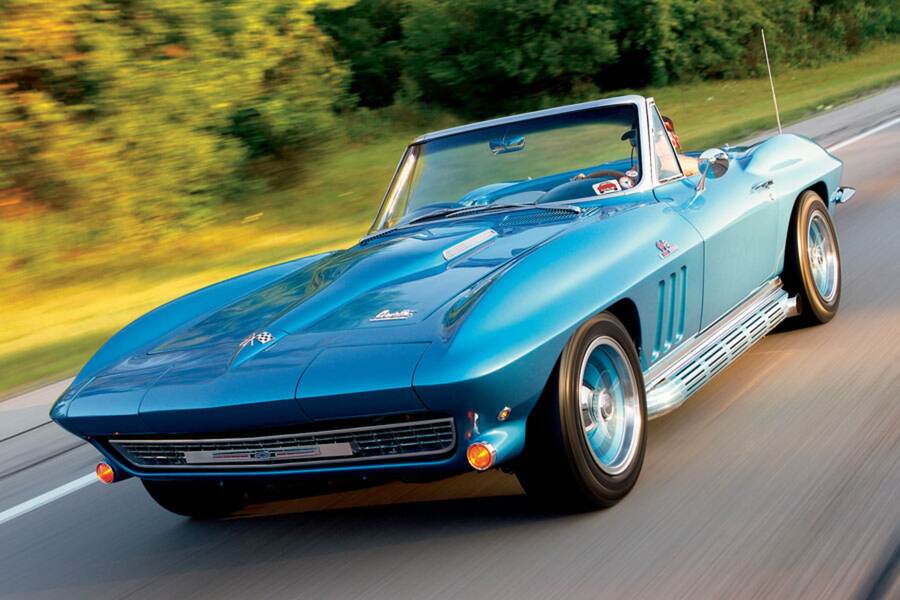 The car’s original steering box was replaced with a new, more precise one from Flaming River. A polished Flaming River tilt steering column and 10-inch Grant wood wheel complete the steering-system mods. The engine’s somewhat radical camshaft doesn’t enable it to make quite enough vacuum for a conventional power brake booster, so a Hydroboost setup, with a dual reservoir master cylinder for added safety, was installed.

Landers would have liked to go with much larger-than-stock tires for better grip but couldn’t bring himself to do what was necessary to the wheel openings to fit them: “I wanted to retain the stock body lines—it’s hard to improve on perfection—so I resisted the urge to radius the wheel wells.”

Though he didn’t alter the fiberglass, Landers did make some relatively subtle changes to the car’s body. He added a third taillight on either side, as was quite commonly done to mid-years in the ’60s and ’70s. He also removed the front bumpers and commissioned Tom Gasper of Top Fuel Diner fame to handcraft a custom bowtie emblem. 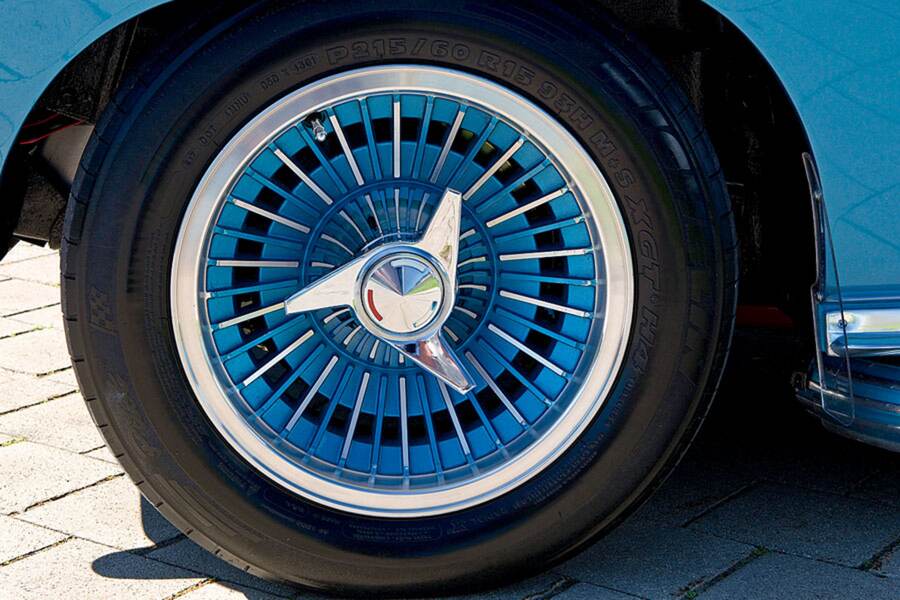 In 2010, the body was completely stripped and prepped by Hopped Up in Columbia Station, Ohio to remove all waves and other factory imperfections in the fiberglass. The same shop then sprayed the car Nassau Blue using a PPG base coat/clear coat combination. It carried the same hue of blue into the 8 × 15-inch knock-off-style Western Wheels and side-pipe covers.

At night, Landers is able to put on a light show owing to bright blue LEDs mounted behind the grille and front fender vents, inside the engine compartment and underneath the side moldings above the side-pipe covers. The underhood lights get a boost from all the chromed and polished metal surfaces, courtesy of Grafton Metal Finishing.

Landers removed everything from the interior and installed aluminum heat and sound-barrier material from Thermal Solutions to the floor and inside the doors. Reproduction bright blue carpeting went over the barrier material and the seat covers were upgraded from bright blue vinyl to bright blue leather with custom silver surrounds. New reproduction bright blue door panels were similarly modified with silver leather inserts like those on the seatbacks. The “Stingray 502” logos were embroidered by Sullivan Upholstery in New London, Ohio.

An audiophile most of his life, Landers put a lot of thought into configuring the car’s sound system. He chose to go with a 500-watt, 11-speaker setup from Phoenix Gold, featuring a Pioneer head unit. A clear “plexibox” subwoofer enclosure sits in the storage area behind the seats.

Since completing the car about three years ago, Landers has shown it extensively, earning over two dozen top prizes at everything from local club events to an International Show Car Association Autorama. Fortunately, Landers is not afraid to drive his old friend. “I drive to local cruises and car shows,” he says, “and frequently take it out for a nice ride.” Harkening back to his racing days, Landers also explores the car’s limits once in a while, “just to scare myself,” he tells us.

Reflecting on his 47-year love affair with this Corvette and its recent transformation into a unique-looking and more drivable car, Landers takes particular pride in the hands-on role he played. “It has been a long journey,” he says, “but the fact that I was completely involved during the restomod process with Fred Kubiak, as opposed to just buying the car finished or paying someone else to do all the work, gives back a great deal in pride of ownership.” 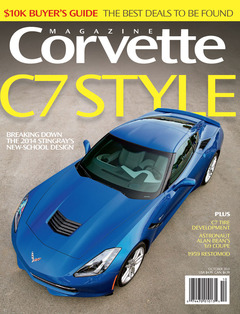