We take an insider’s look at the development of the 2014 Corvette Stingray, from the building of early prototypes to the testing of production-ready vehicles. 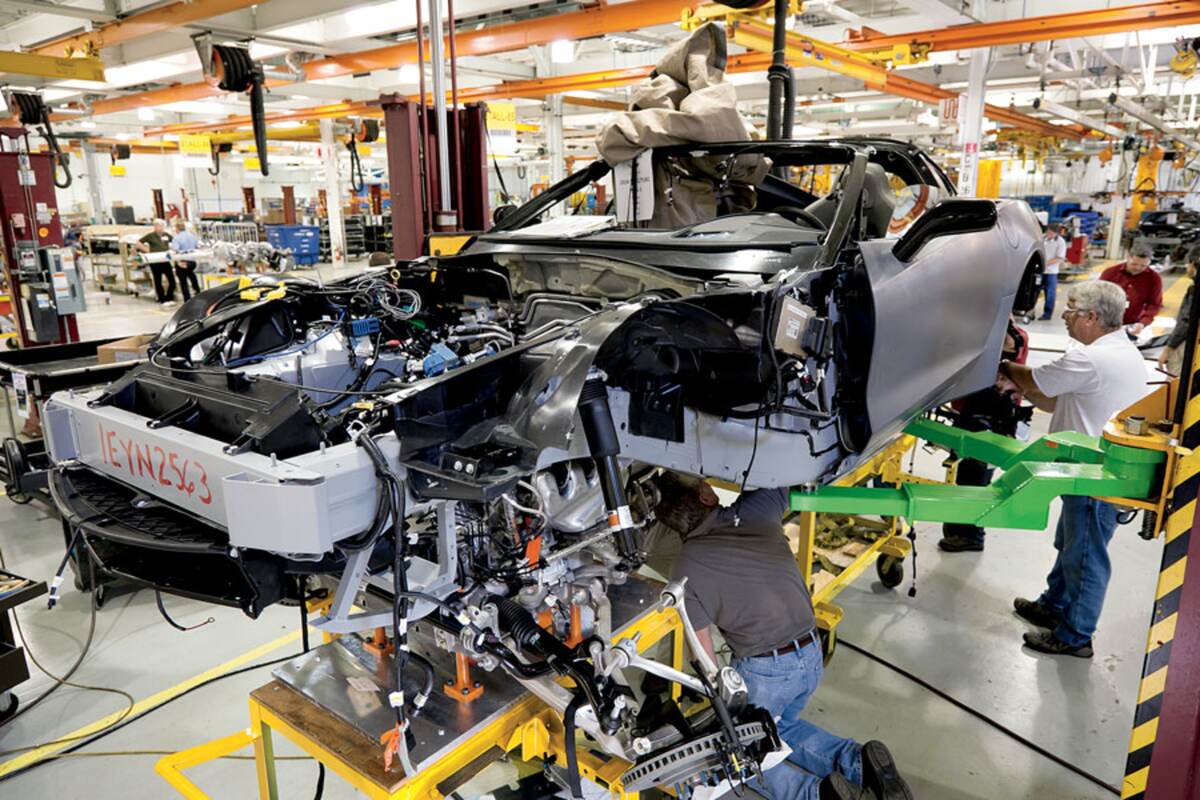 The building of early prototypes was a slow, tedious process, requiring lots of hand labor. At this point, the focus was as much on figuring out how to assemble the new Corvette as it was creating a running vehicle for testing purposes.

Josh Holder has a highly demanding job. As Corvette Program Engineering Manager, he has overseen the development of the 2014 Corvette Stingray, an enormously complicated, three-year process fraught with design challenges, logistical hurdles and management demands. It was Holder’s responsibility to make sure the program stayed on schedule, from the creation of early proof-of-concept cars to the design of buildable prototypes to the testing of production-spec vehicles. Along the way, Holder had to make sure the engineering team was coordinating its work with the folks at the Bowling Green Assembly Plant—the C7 had to be better, but it also had to be buildable. Oh, and there was the maze of Federal safety and emissions tests that needed to be negotiated. In early April, as the C7 testing program was coming to an end, Holder walked us through the development process.

It starts with mules. In the fourth quarter of 2010, Chevrolet began building vehicles used to test the fundamental engineering concepts behind the C7. Referred to as “mules,” these hand-built cars helped engineers and designers make important decisions about the new Corvette’s structure, powertrain and styling. It was at this point, for example, that big changes such as the C7’s new radiator layout were examined for their viability.

The first seven mules were non-runners, used mostly for safety testing and dimensional analysis. By early 2011, the Corvette team had built running vehicles using the current Corvette as a platform. Holder pointed out that getting these cars on the road was a real feat because they combined both C6 and C7 elements. Since the C6 is outdated electronically, the mules required two electrical systems: one for the C6 part of the cars and another to run the new C7 elements. In all, 19 mules were built. 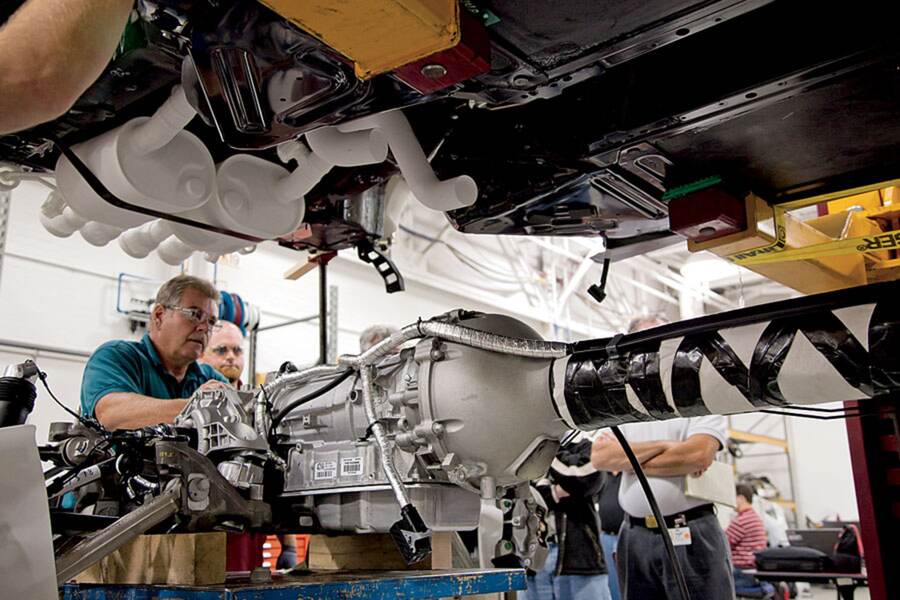 If these exhaust pipes and mufflers look like they’re made out of plastic, it’s because they are; here, they are being used to help determine proper transaxle fit.

By late 2011, with most of the big decisions about the C7’s design having been worked out, the Corvette team was ready to begin building what are referred to as Integration Vehicles. Though highly representative of the final product, these test cars were mostly hand-built and, as a result, extremely expensive to produce. According to Holder, the construction of the IVers—as they are called—was the development program’s biggest expense. Over the course of C7 development, a total of 86 were built. “We had to fight to get those 86 cars,” said Holder of budgetary battle with those controlling the purse strings.

Initially, an IVer’s purpose is to help the engineers work out the assembly processes for the new Corvette. Their aluminum frames were built in the Detroit area by the same the robots that now reside in Bowling Green. The subcontractors who designed, built and programmed the robots were on site, right alongside the Chevrolet engineers. During the assembly of the rest of the car, engineers had to not only make sure all pieces fit together properly, they had to determine precisely how the car should be put together. Not surprisingly, representatives from Bowling Green were deeply involved in this process. Once established, build protocols were tested on a mocked-up assembly line, also located in the Detroit area.

Once built, IVers were quickly pressed into their various testing duties, that is after they had received several layers of camouflage. Some cars, especially early ones, were built with specific tests in mind. For example, IVers destined for chassis development might not be built with complete instrument-panel assemblies. However, all IVers eventually served multiple purposes, with a good number of them ending up crumpled in the name of occupant safety. Holder says that 95 percent of 2014 Corvette testing was completed using the IV fleet. 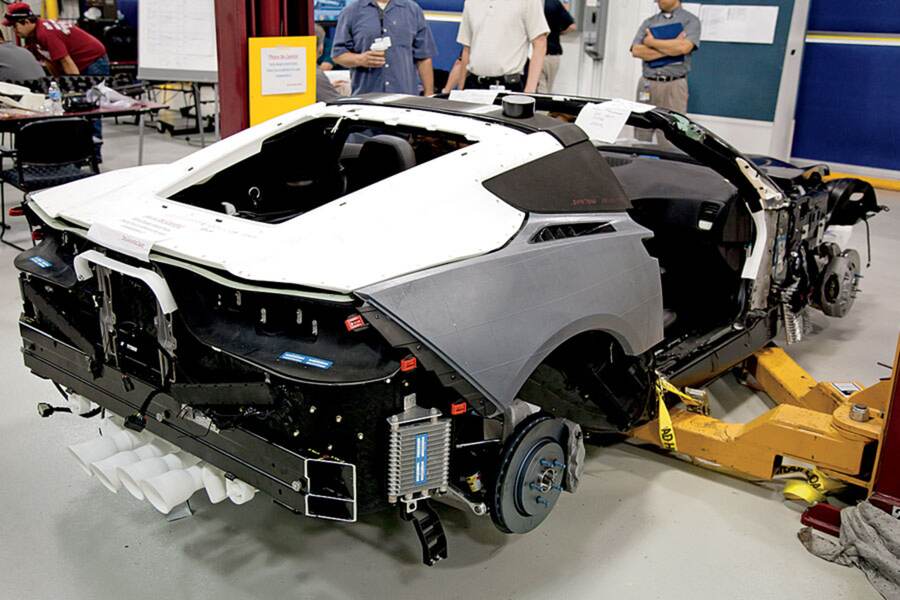 With the transaxle in place, this assembly prototype is nearing completion; the rear-mounted differential cooler is fed air from the duct on top of the fender.

Given the advanced state of computer-aided design and the sophistication of modern simulation devices, we asked Holder if the C7 required less real-world testing than previous Corvette generations. A 15-year GM veteran who worked on the previous two Corvettes, Holder says the C7 underwent the same amount of physical hardware testing as its C5 and C6 predecessors. “Cars have gotten more complex, which requires more testing and analysis,” he explained. The difference, he says, is that the predictive tools take a lot of trial and error out of the process, leading to better results. This is especially true with aerodynamics, where the use of computational fluid dynamics has made airflow management less of a black art. Still, the C7 spent over 700 hours in the wind tunnel, and there is no substitute for having a living, breathing test driver check for potential issues like wind noise.

The same is true of testing subjective aspects of the driving experience like ride quality; here, the human element is key. The IVer fleet pounded plenty of pavement—no less than 1.5 million miles, to be exact. That’s 60 times around the globe. At General Motor’s expansive Milford Proving Ground outside of Detroit, at Michelin’s Laurens Proving Grounds in South Carolina and at racetracks across the country, C7 prototypes were subjected to myriad forms of abuse. Previous tests were verified, build quality was validated, durability was proven and performance boundaries were pushed. Though IVers were exposed to temperature and weather extremes in GM’s full-size simulators—from minus 40-degree F temperatures to monsoon rain—that didn’t keep test drivers from conducting real-world tests in harsh conditions.

At the end of March 2013, just before we spoke with Holder, the C7 development program reached a major milestone: “vehicle testing complete.” We asked if final tweaks could still be made on such things as the computer algorithm that controls the Magnetic Ride Control shocks. Holder replied, “The tune is done on the 2014 Corvette. We have to put a stop to it at some point.” He acknowledged that some minor changes could be made, but only if there was a problem that needed to be addressed. At that point, the focus of the development program had already shifted to validating the build process at Bowling Green. 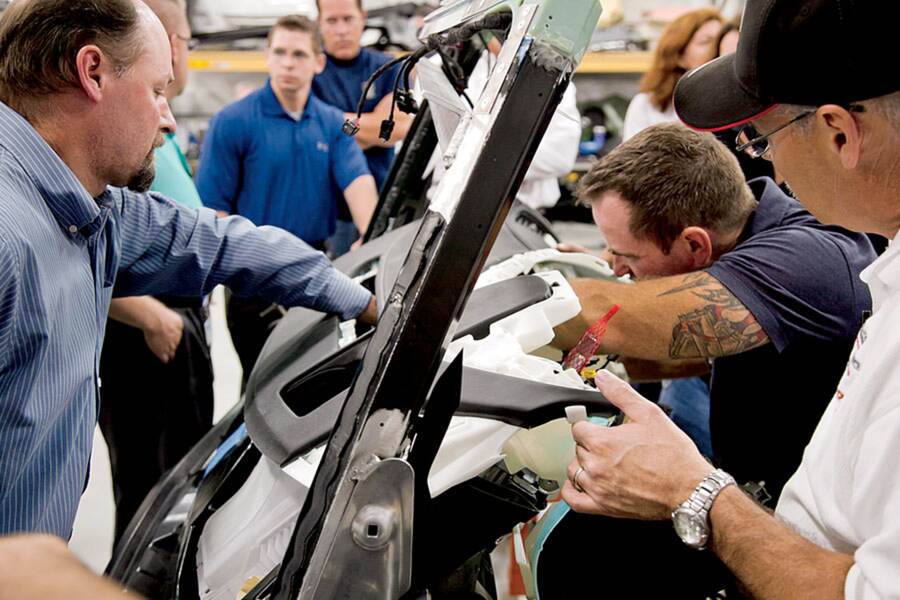 Making sure everything fits properly is a top priority on the early builds.

In April, 21 Production and Process Verification vehicles were built. This was followed by the building of a small batch (or “bucket,” in company jargon) of Stingrays that were to be used for Federal safety and fuel-economy testing. After that, Holder said 300 “saleable” C7s would be built for GM’s own captive test fleet. These cars will be driven by a wide variety of GM employees, with the aim of checking build quality and tracking down any potential problems before final production begins sometime late this summer. Until then, Bowling Green will be focused on perfecting its assembly techniques and progressively ramping up line speed.

We can’t wait to get behind the wheel of a 2014 Corvette Stingray in August. Thanks to the exhaustive work of its development team, and the stewardship of folks like Josh Holder, it promises to be an extraordinary vehicle. 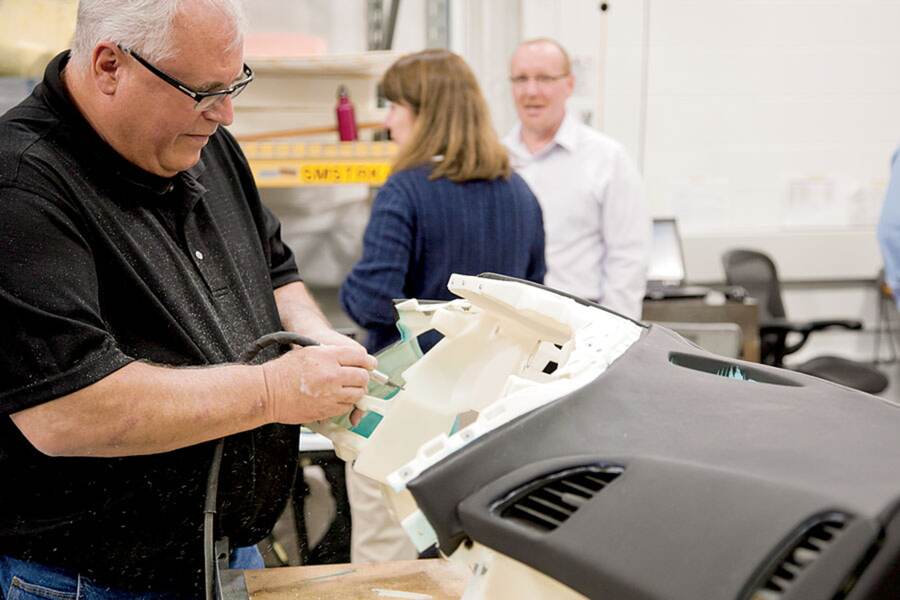 Necessary changes can be made on the spot, as was the case with this dash panel; the modified part is then precisely 3D-scanned, allowing an update to be made to the specific Computer Aided Design drawing used to create this part. 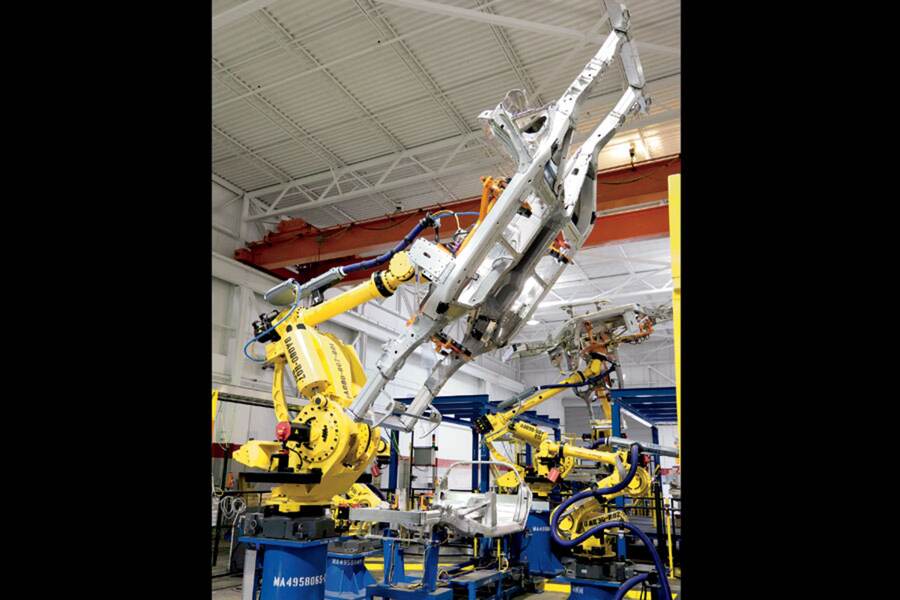 Before being sent to Bowling Green, the robotic frame-assembly line was thoroughly tested in the Pre-Production Operations garage, providing the development team with lightweight aluminum foundations for their Integration Verification vehicles. 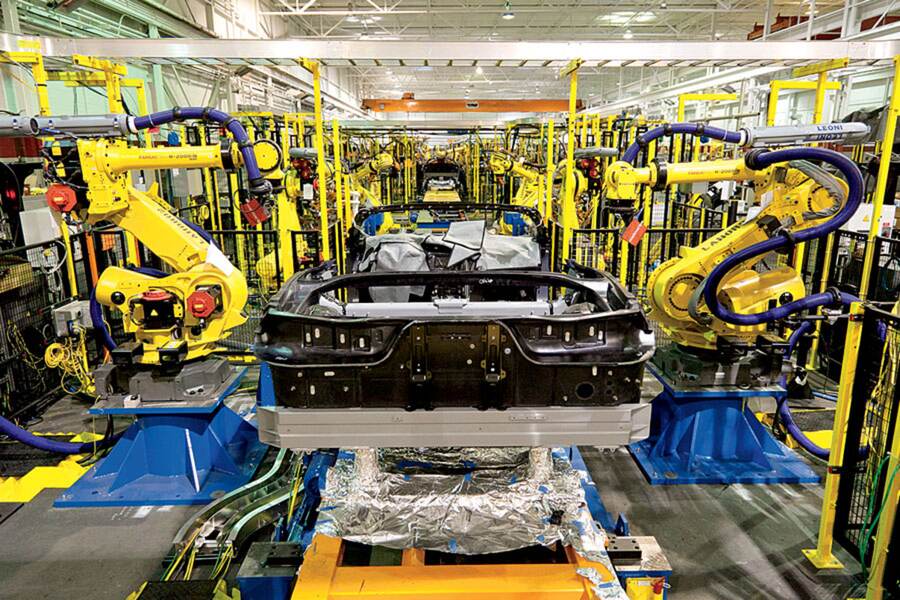 Whereas early prototypes were put together by hand, later ones were built on a mock-up assembly line; as with the frame-building process, this allowed production techniques to be optimized while Bowling Green was still assembling C6s. 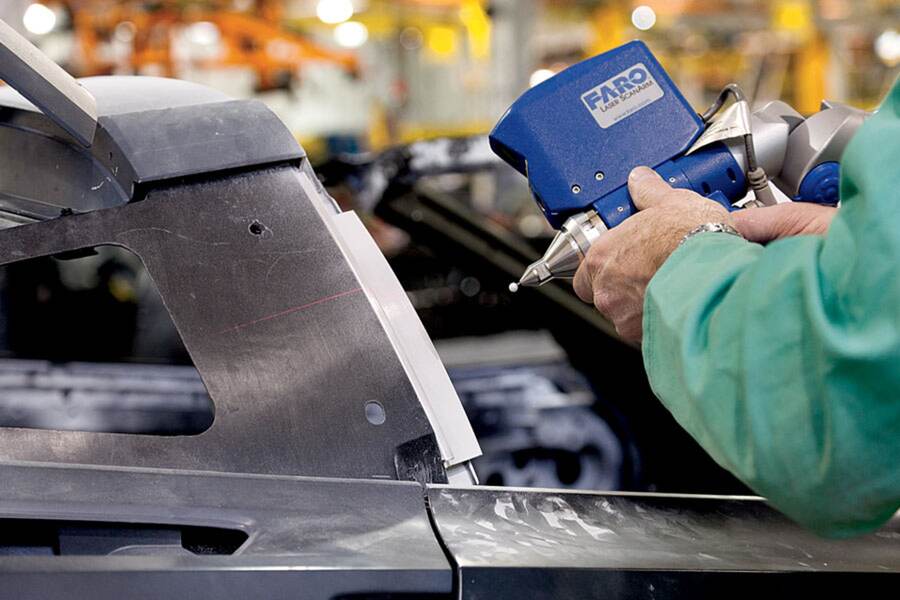 A laser scanner is used to check for production tolerances. 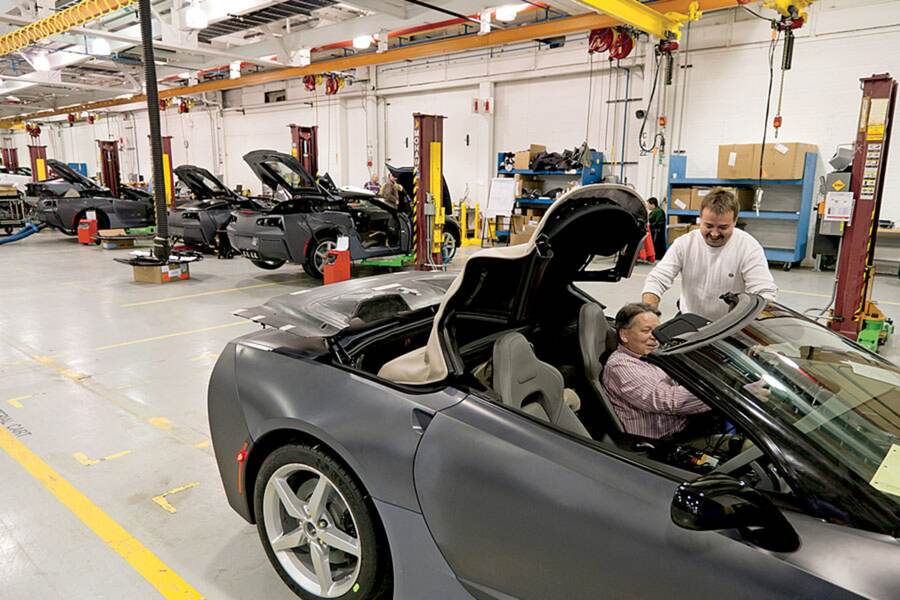 Though the convertible made its international debut three months after the coupe, the droptop was developed right alongside its hardtop sibling. 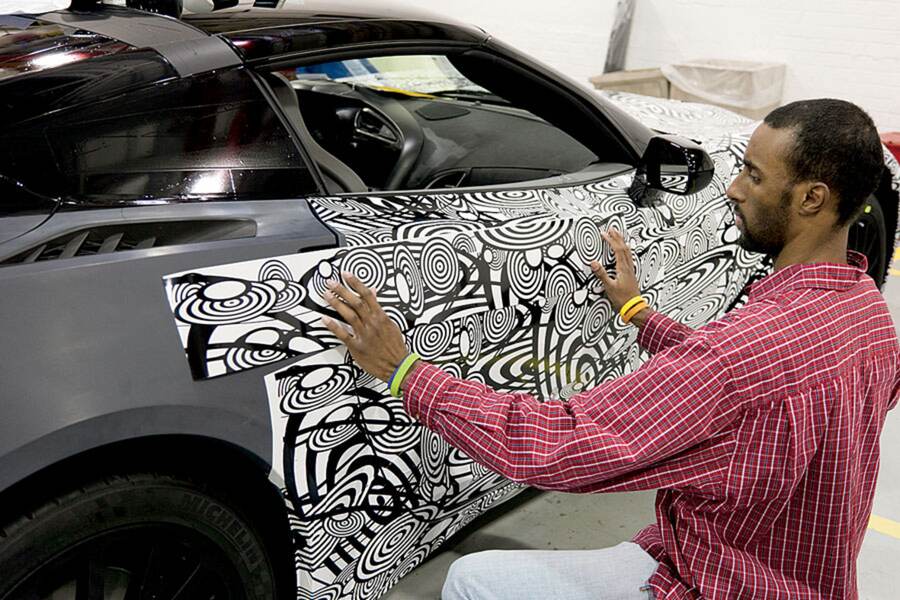 “Zebra tape” camouflage was applied to the test cars before they saw the light of day; the graphic treatment is carefully designed to hide styling elements. 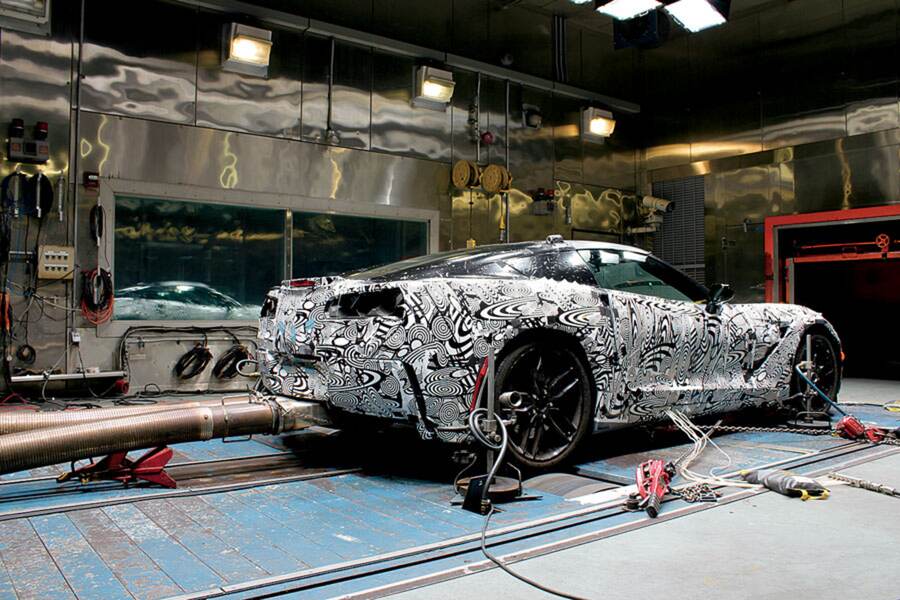 Many thousands of testing miles were completed in GM simulators, where C7s were subjected to extreme temperatures, high altitude and drenching rain. 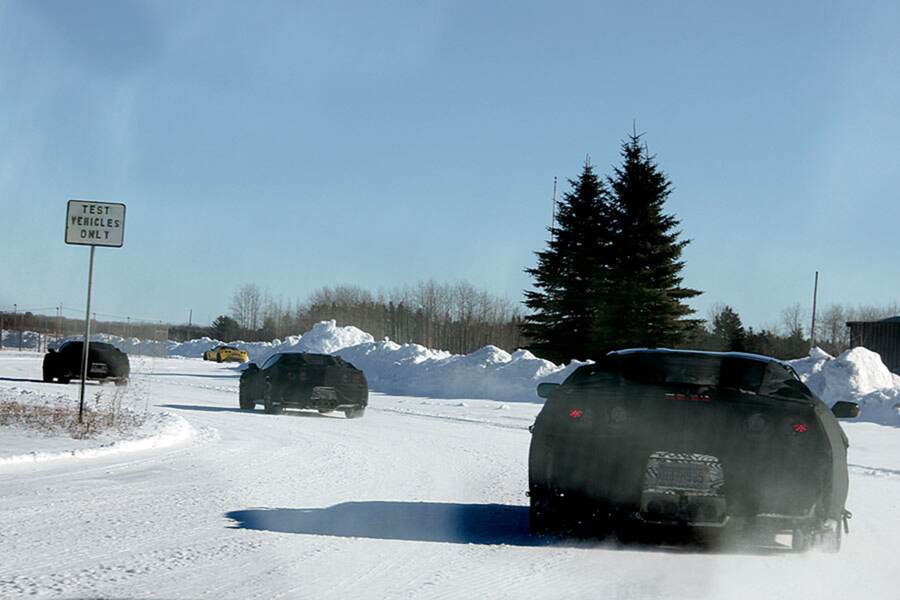 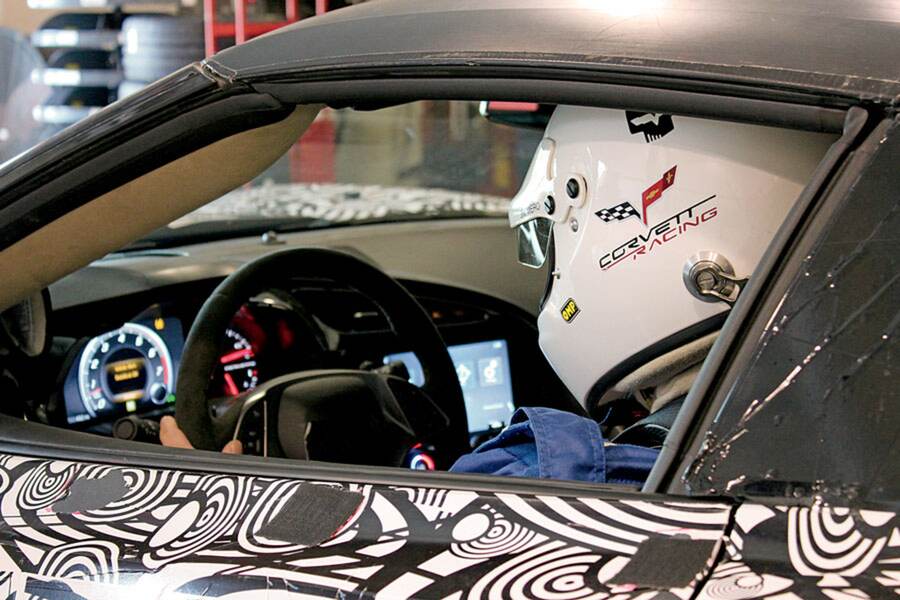 At GM’s Milford Road Course and a long list of racetracks and proving grounds across the nation, test drivers logged countless hours behind the wheel of the C7 prototypes. 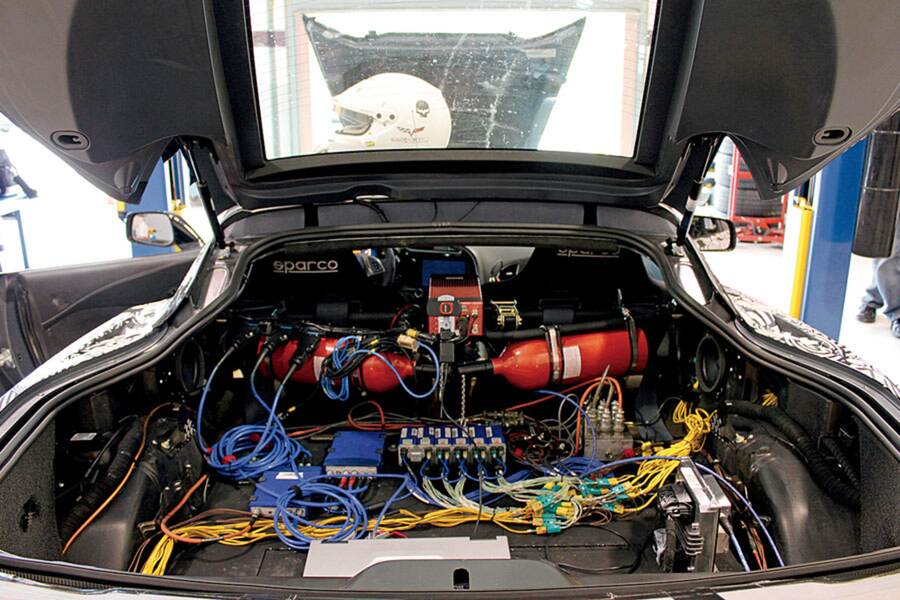 Though driver feedback is just as important as ever, engineers make sure to record as much objective data as possible during testing. 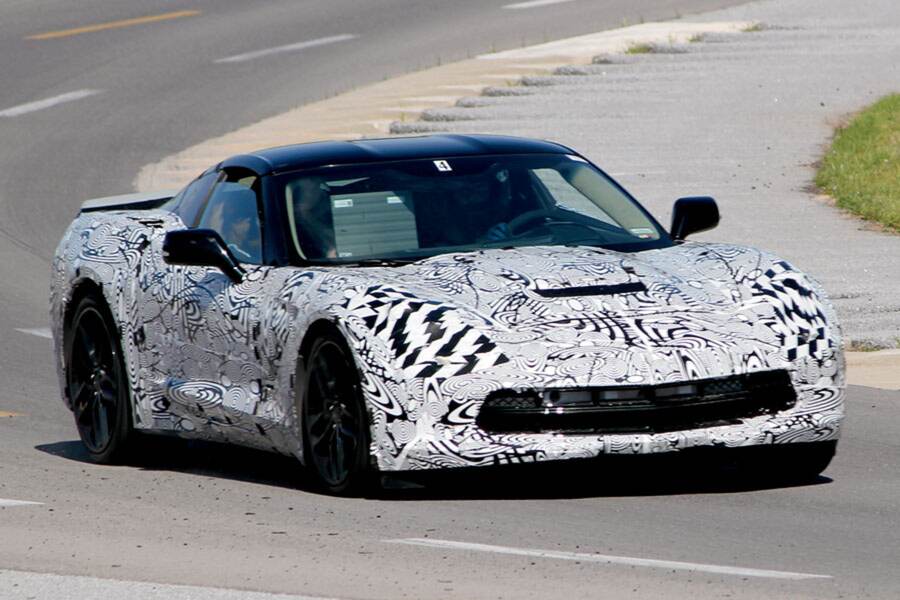 With his passenger plugging away on a laptop, a test driver laps the Laurens Proving Grounds, Michelin’s private facility in South Carolina. 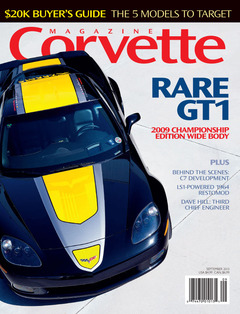