End of the Line

It is only fitting that the last Corvette Dick Guldstrand built features elements of multiple generations, including a Sting Ray body, C4 suspension and a fifth-gen powertrain. 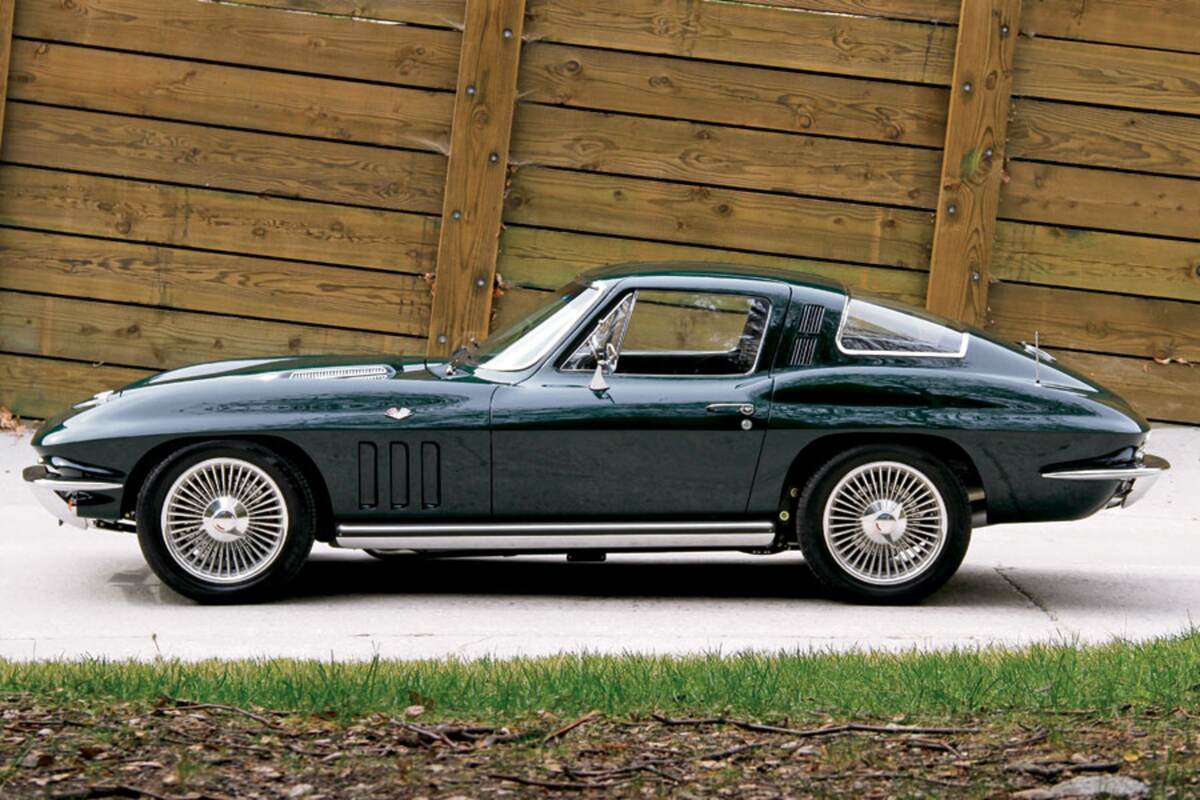 Guldstrand Motorsports began somewhat inauspiciously in the Burbank, California backyard of Dick Guldstrand’s friend and crew chief Bobby Joe MacDonald in 1969. In the more than four decades since, the shop has built hundreds of race and street cars and worked on thousands more. Former Corvette racer Guldstrand never guessed that one of his final projects would be a cup holder. “Ah, yes, the cup holder,” Guldstrand says with a hint of ruefulness. “We could write a story about the cup holder.” And so we shall.

The story starts in 2009, with a telephone call. On the phone was Victoria Hearst, daughter of newspaper publisher Randolph Hearst, granddaughter of legendary media giant William Randolph Hearst and a long-time customer of Guldstrand Motorsports. She was calling Guldstrand about a car she wanted to have built.

As Hearst tells it, “A friend got me hooked on watching Barrett-Jackson auctions on television, and I started seeing these cars, street rods, that had the original body and stuff, but put it all on a new chassis. I thought, ‘You know what, I’d like an older Vette, but I don’t want to deal with all the old mechanicals in it.’ So I called brother Dick and said, ‘I’ve got a plan. What if we got a mid-year and put it on a modern chassis? Would you want to be my partner in crime?’” 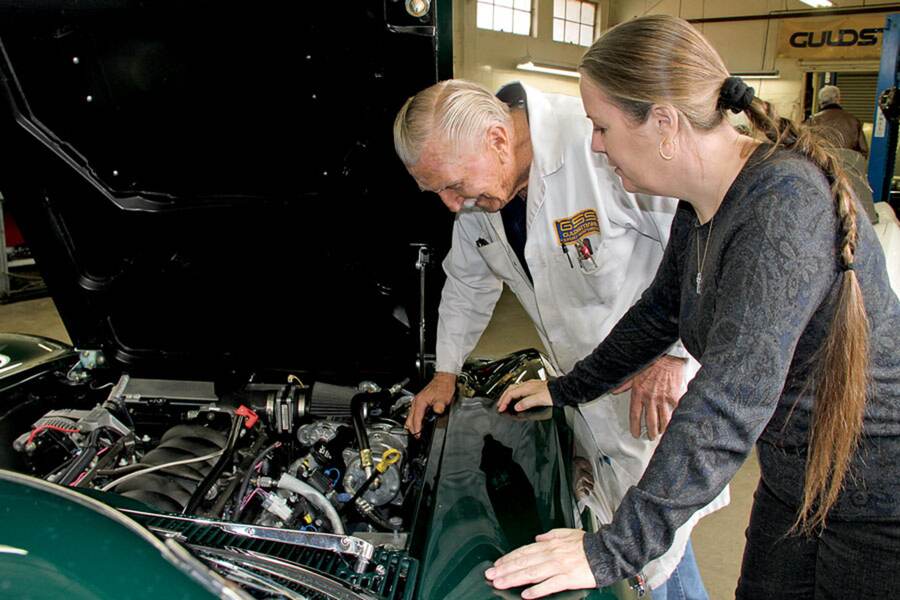 Guldstrand readily agreed and therewith began a search for the appropriate car. The hunt consumed over nine months, took Guldstrand all the way to the East Coast and turned up a lot of badly repaired bodies and bent, rusty frames. Finally, ironically, the car he ended up buying, a 1965 coupe with a standard 327 V8 and four-speed manual transmission, was located in Southern California, scarcely 30 miles away.

“It was owned by a wonderful guy,” Guldstrand recounts, “a retired Navy pilot who had bought it to drive and then restore with his son. After he retired, his son moved away and all of sudden he wasn’t into it anymore.” Over the course of 15 years, the owner had taken the car apart and amassed replacement parts. Members of a local Corvette club told Guldstrand about the car and said the owner would probably like to be made some sort of decent offer to take it out of his garage. And that’s exactly what happened.

With the Corvette in hand, the work could begin. Guldstrand started with a frame from Paul Newman of Newman Car Creations in Templeton, California. “We have a lot of experience with the C4 suspension parts, how to modify them for the old frame,” Guldstrand explains. “Instead of having to retool and fabricate the whole thing, though, we had Newman do one of his frames and sent him the parts to put on it, and then he fabricated where I wanted to put the bits and pieces.” The chassis features several Guldstrand Motorsports suspension components, including strut rods, anti-sway bars and bushings. This is the first Newman frame to use coil-over shocks, units specifically developed and sold by Guldstrand for C4 Corvettes. “It was quite a study,” Guldstrand smiles. “I mean, back and forth, all the drawings and fiddling around. We had to modify the entire backside to get the C4 suspension parts, coil-overs and all that on it the way I wanted them.” 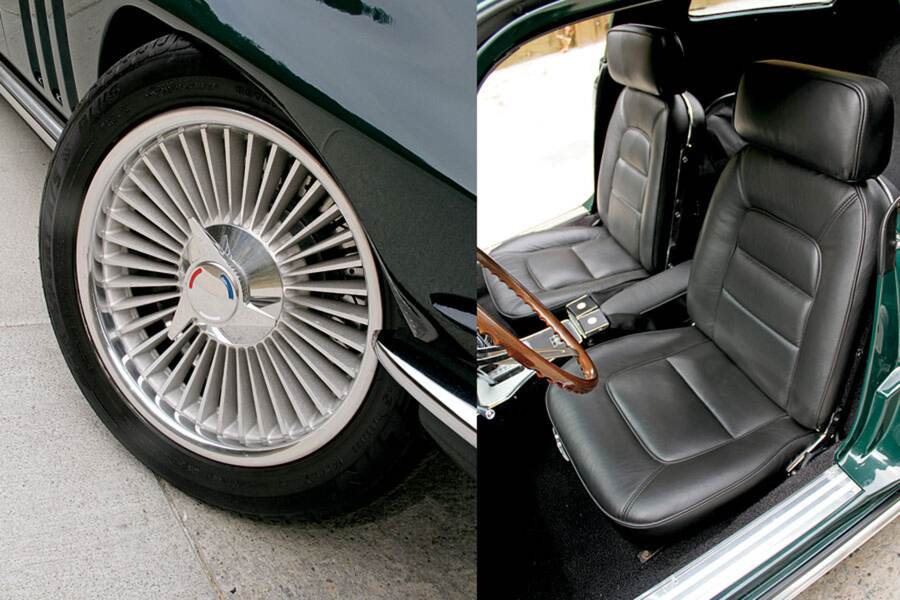 As for the powerplant, Guldstrand chose to go with an LS1 engine. In standard trim, this C5-era 346-cubic-inch V8 is good for 345 horsepower; Guldstrand massaged it to the tune of 400 horsepower. It is mated to a four-speed 4L60-E automatic transmission, as Hearst confesses she can’t drive a stick. Special mounts had to be fabricated for the engine, transmission and 12.5:1-ratio rack-and-pinion steering box. The frame was further modified to accept the custom exhaust system designed by Guldstrand; it incorporates Flowmaster components.

While Guldstrand attended to the frame and mechanicals, Hearst sorted out her priorities for the interior and exterior. “My job was sort of the cosmetics,” says Hearst. “There were the practical things like the heater, AC and a good AM/FM radio. I wanted to go as authentic as possible, so that for all the world it looks like an original ’65 coupe. That was my deal.” Most of all, however, Hearst was concerned with preserving the car’s exterior: “I wanted a mid-year hardtop because I’ve always liked the styling. I think that car is just so pretty. There’s a timeless look to it. The idea was to fit everything under the stock body with no modifications to it whatsoever.”

Keeping the body unchanged ruled out using any sort of fender flares, but Guldstrand still wanted optimal handling, which meant using the original 15-inch wheels was out. “You can’t get decent tires on 15-inch wheels,” Guldstrand opines, “or even on 16s, for that matter. They just don’t make them.” Guldstrand decided he wanted to use Michelin Pilot Sport tires, 245/50ZR17 in front and 265/45ZR17 in the rear. The biggest challenge would be getting larger wheels and tires under the stock fenders while at the same time maintaining the proper relationship to the suspension and clearing the brake rotors. Hearst also wanted the wheels to look like the classic knock-offs of the ’60s. 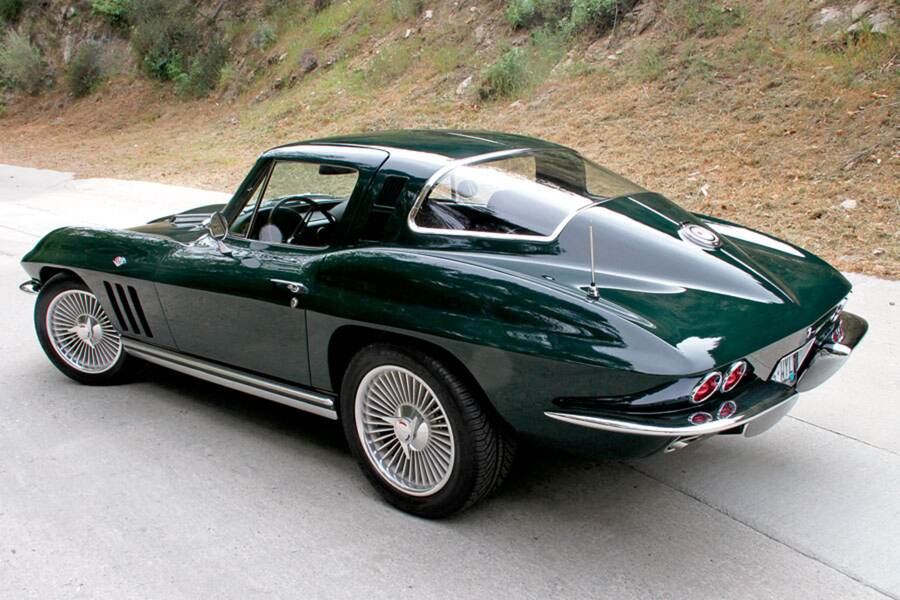 The only way to accomplish this feat was to have custom wheels built. Evod in San Diego, California, got the nod. Using a Guldstrand-specified offset, it milled a set of 8 × 17-inch wheels from aluminum billet. These clearly are not wheels you can run down to the local Pep Boys and buy.

The original body was in fairly good shape, so only a little clean-up work was required. Hearst wanted a factory-look paint job—no candy-apple red, thank you—but not a standard 1965 GM color. After looking at paint chip after paint chip, she finally decided on a rich green that Guldstrand describes as about two shades darker than British Racing Green, with just a hint of metal flake in it. It is subtly stunning.

As for the interior, it takes several long looks to tell the differences between an original 1965 and the inside of Hearst’s car. The most obvious thing, sort of, is the seats. At first glance they seem original. On closer inspection, however, you see there is definitely more side bolstering than on the originals, but the real giveaway is the headrests. “I picked out the seats, and they look stock,” Hearst says. “But they’re not,” Guldstrand interjects. “We had them remanufactured and added the headrests.” 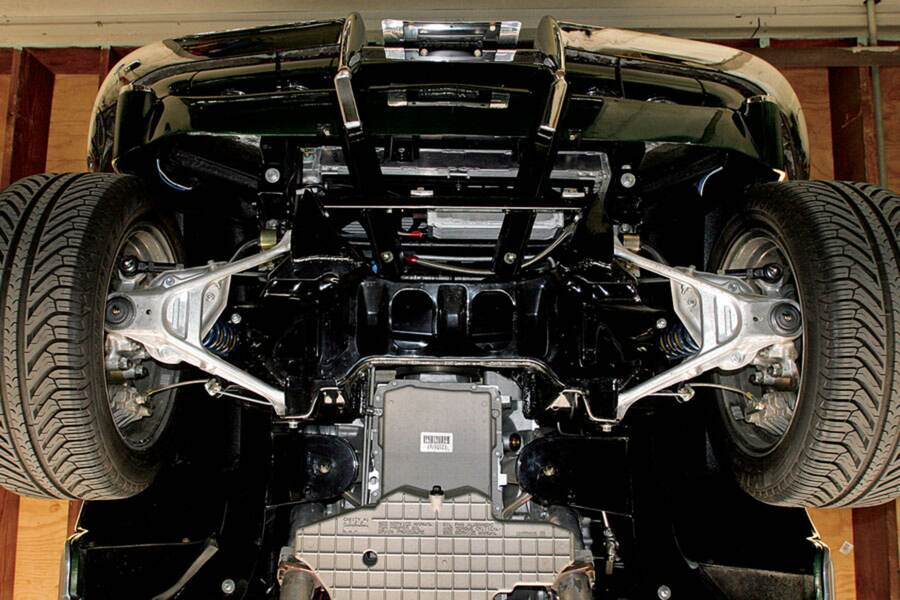 The next thing you might notice is the center console, which is a little wider and longer than the factory unit in order to accommodate the larger automatic transmission. Perhaps even more subtle is the shift quadrant, which appears absolutely original, except that is has detents for four forward speeds rather than the three of the ’65 automatic.

The dashboard seems box stock, but, as with the rest of this car, appearances are more than a little deceiving. The gauges are arrayed in the customary mid-year fashion, and look as original as all get out. Only thing is, they’re not. Because of the C5 powertrain’s computer controls, the gauges have to be electronic. So how is it they look so original? “We had a guy take the faces off the old analog gauges and put them on the electric mechanisms we needed for the tach, speedometer, gas gauge and so on,” Guldstrand illuminates.

The HVAC controls and the vertical radio have the old familiar appearance, but they are also state-of-the-art devices. “The air-conditioner and heater are from Vintage Air,” says Guldstrand. “They worked with us to get it to look like the right thing and it fit in really well, although it took us a month just to get the ducting underneath the dashboard so it did not tear everything up.” In the end it all fit, “and we still had room for the glove box,” Guldstrand smiles. 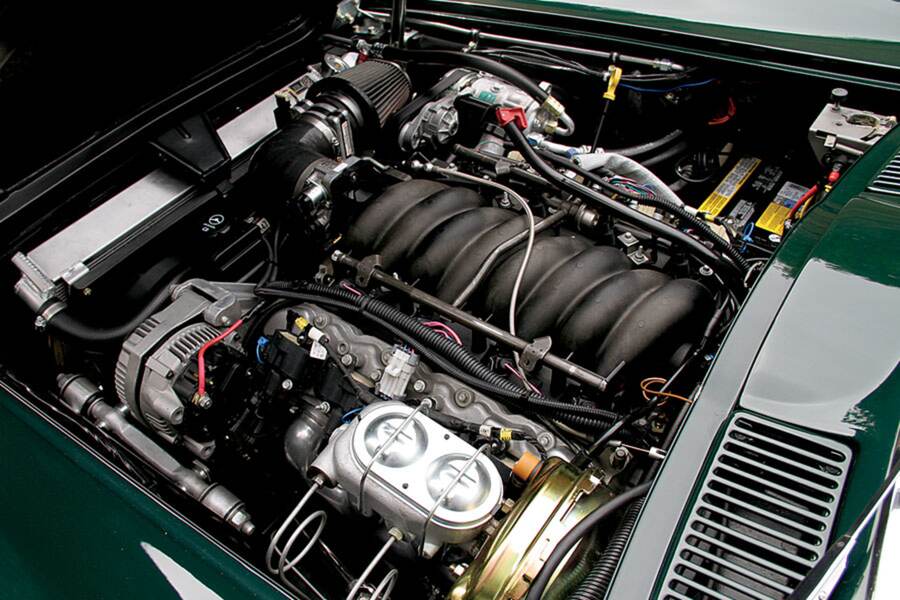 And that brings us to the cup holder.

Hearst had said at the project’s inception that she desired practicality in her Corvette. This included having a cup holder, something, as we all know, a 1965 Corvette didn’t have. “We looked all over and found one at Eckler’s,” says Guldstrand, “but it was a wooden thing that fit over the hand brake. That wouldn’t do.” So he set about using his decades of hot-rodding experience to design a proper cup holder from scratch.

After some serious brainstorming, Guldstrand fashioned a unit using a piston from a Corvette engine. The top of the piston was removed and re-attached deep inside a piston barrel. Then a square plug was welded on the bottom where the connecting rod would normally go. In turn, this plug fits into the ashtray in the Vette’s center console, while a soda can or water bottle sits inside the piston barrel. Voila, a cup holder! Guldstrand even topped it off by putting a Corvette crossed-flags badge on the piston. “I love it that he put the Corvette logo on the cup holder,” Hearst laughs. “That’s just too much fun!” 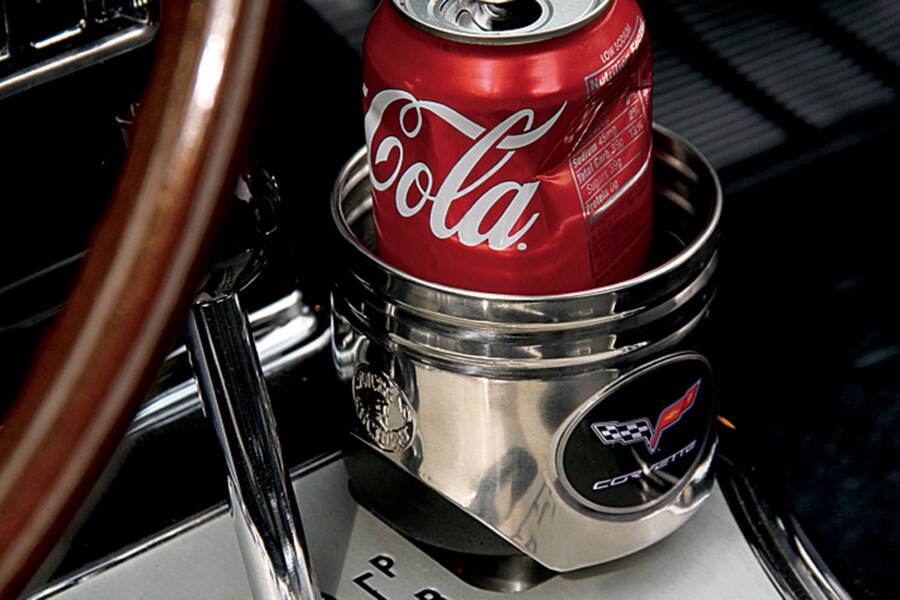 “That’s what building all those hot rods and race cars will do for you,” Guldstrand says with that characteristic twinkle in his eye. “You can make a neat cup holder.”

In a way, that cup holder may be Guldstrand’s crowning touch. After 43 years of operating Guldstrand Motorsports, and some 70 total years building hot rods and race cars, Guldstrand decided at the beginning of 2012 that it was time to sell his shop and, as he says, do something with his life. The last car to roll out of Guldstrand Motorsports was Victoria Hearst’s 1965 Corvette. 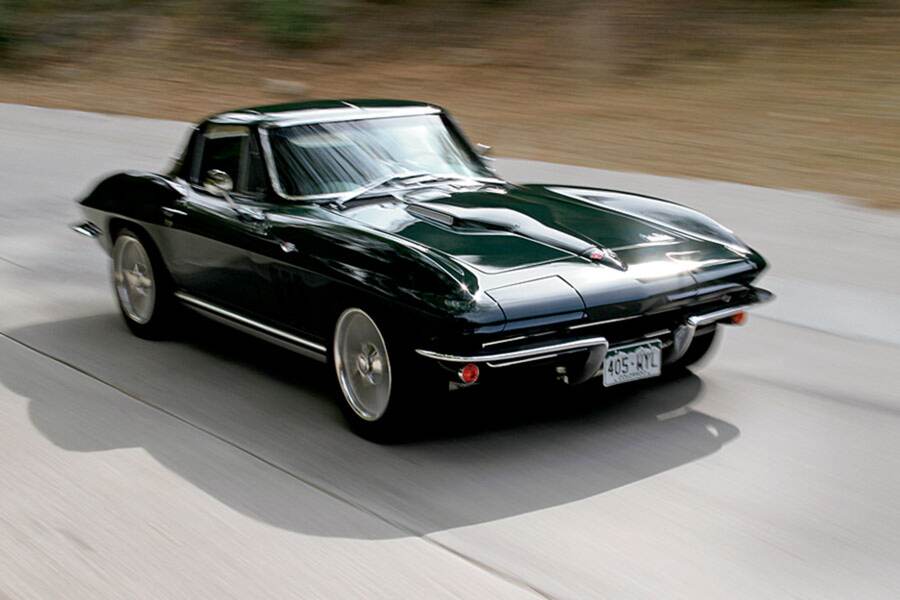 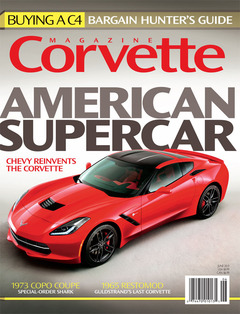