My Other Car's a Driver

What do you do when your restored mid-year has won all the big awards? Build a C2 you can drive. 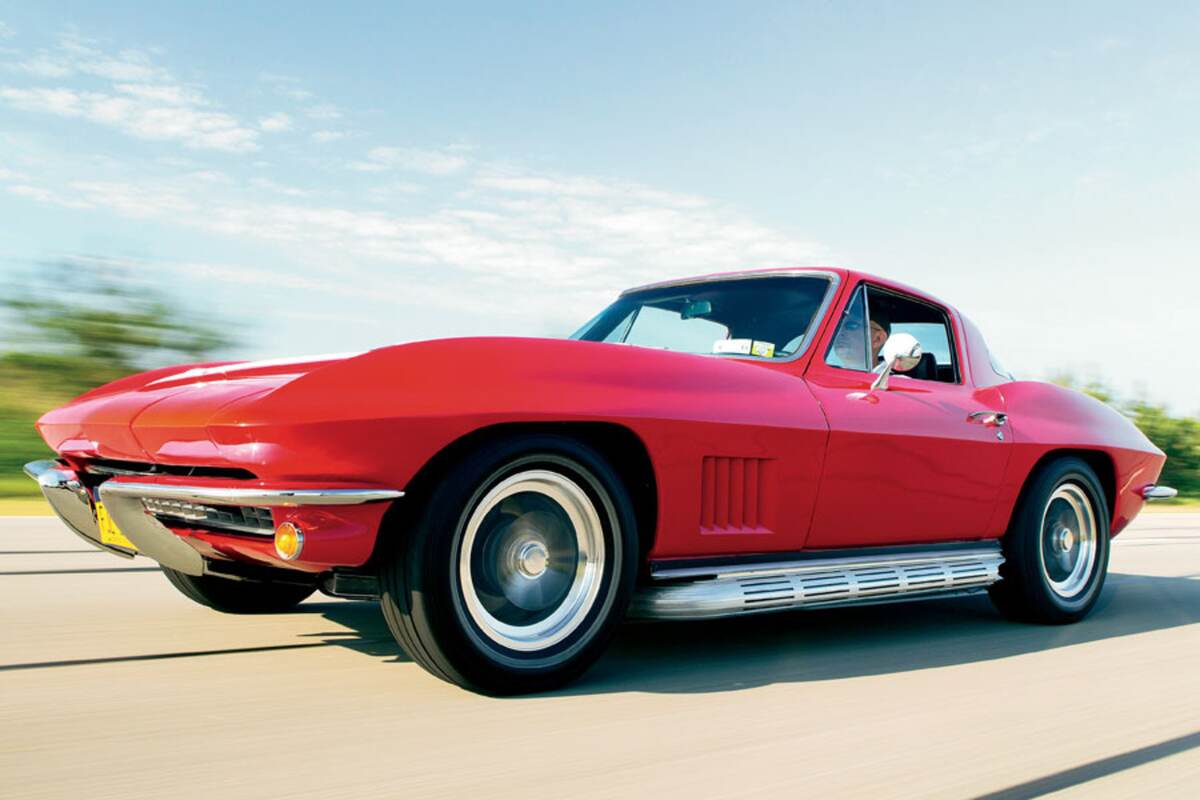 Most people involved in the upper echelons of the Corvette restoration hobby find themselves in a love-hate relationship with their car. They embrace the challenge of returning their vintage Corvette to original condition, but at the same time they’re intensely frustrated by their inability—or more accurately stated, their unwillingness—to drive the car once it is completed. The cost for a professional restoration often far exceeds the finished product’s fair market value, especially in today’s economic climate, making it extremely painful to sell a top-level restored car. So if they can’t drive it and can sell it, what exactly can they do with it once the National Corvette Restorers Society and Bloomington Gold awards are in hand? Not much, other than let the car fester in a secure, climate-controlled storage facility, and that’s exactly what most people do.

For those with sufficient storage space and a few extra shekels to spend there is a good antidote for this malady. It’s called a driver car. As the name implies, it’s a car that’s in the stable to serve the purpose for which it was originally intended.

New Yorker Tom Commons knows the feeling first hand. He has a number of extraordinarily correct Corvettes in his collection, and while he enjoys each for what it is there was definitely more than a small measure of frustration in the mix. “Previously, I had approached the hobby from a purist’s point of view,” he explains. “I am an active NCRS member and all of my other Corvettes are totally factory correct. I decided that I really wanted to have one Corvette that I could enjoy driving without worrying about damaging an original motor or fiberglass.” 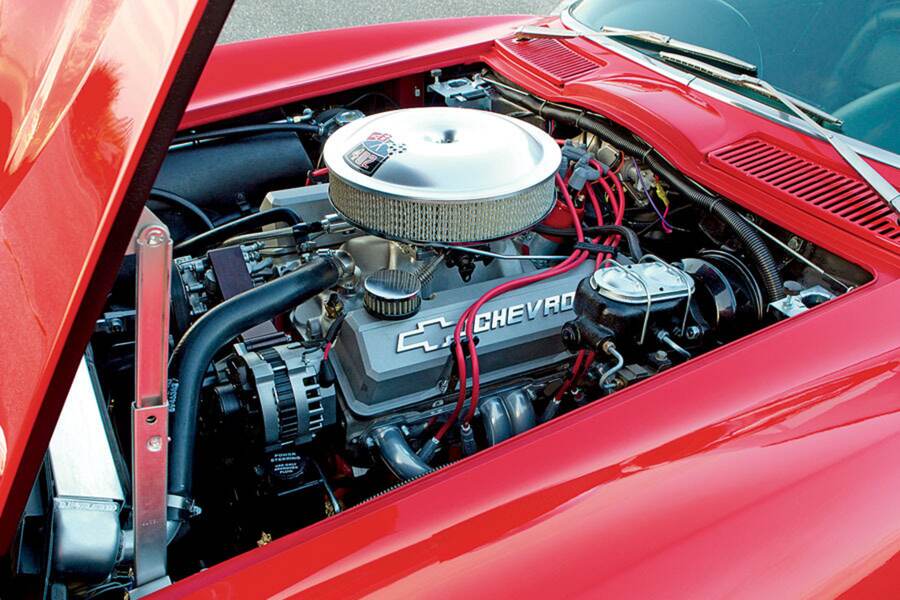 Common’s decision to build a mid-year driver was only the beginning of a long process. Before he actually dug in and began turning wrenches, he had to decide which direction the project would take. At one extreme, some people building drivers go with a 100-percent factory look and configuration and end up with a car that looks as though it would be right at home on the judging field at Bloomington even though it would typically score very poorly because of incorrect numbers and date codes. At the other extreme, some go with a very highly modified car that looks and performs quite differently from a stock Corvette of the same vintage. Commons decided to split the difference, but with a clear bias toward factory looks and performance. “I wanted to build a restomod, but it was important to me not to stray too far from the raw, visceral nature of a mid-year Corvette,” he explains.

Commons began with a 1967 coupe that was perfectly suited for the project. It had a non-original 327/350-horse engine, a replacement nose and at some point in its past, an owner had painted it an attractive shade of red instead of the original Silver Pearl. The car looked nice and ran and drove well but Commons wanted a bit more muscle under the hood. The stock-type engine was replaced with Shafiroff Racing’s Ultra Street 402 small-block V8, an off-the-shelf engine package that delivers 455 bhp and 500 lbs-ft of torque. The only modification to the engine Commons made was the addition of a Frontrunner serpentine accessory drive system.

To gain better performance and drivability, Commons had the car’s 4-speed Muncie gearbox replaced with a Keisler Engineering-supplied Tremec TKO 600 5-speed unit. Besides having the strength to stand up to the new engine’s power and torque, the Tremec also offered the significant benefit of a 0.64:1 overdrive ratio in fifth gear, allowing excellent highway cruising behavior in addition to neck-snapping acceleration in the lower gears. 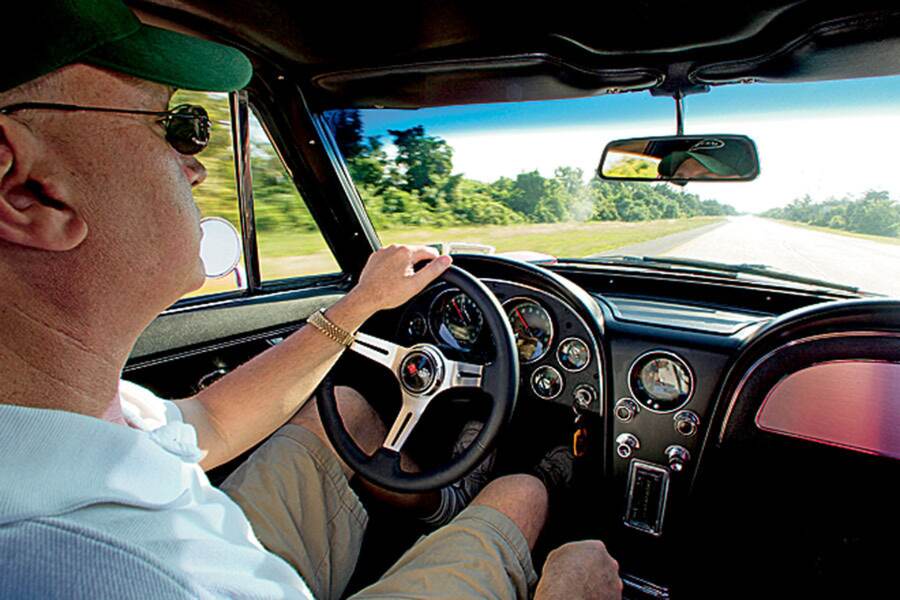 Before installing the new engine and transmission, Commons cleaned and painted the engine compartment. He also replaced the somewhat scrappy original wiring harnesses. For peace of mind, he installed a new brake master cylinder and power booster. Similarly, Commons decided to rebuild a number of components and systems while the car was apart just to lessen the chances of failures down the road. He sent all of the gauges, both headlight motors and the windshield wiper motor to Corvette Specialties of Maryland to have them rebuilt and cosmetically restored.

Though air-conditioning was an available option in 1967, this particular Corvette did not come with it. To remedy that situation Commons installed a Vintage Air system. It might not look like the factory setup, but it is specifically engineered for mid-year Corvettes so it fits nicely and looks good. And best of all, it works well, making all the difference on those sultry summer days.

Mid-year Corvette engines tend to run on the hot side and the addition of air-conditioning usually aggravates this tendency, primarily because the a/c condenser mounts in front of the radiator and effectively pre-heats the air before it passes through. To reduce the chances of overheating, Commons installed a new big-block-rated aluminum radiator and supplemented air flow with dual electric fans. 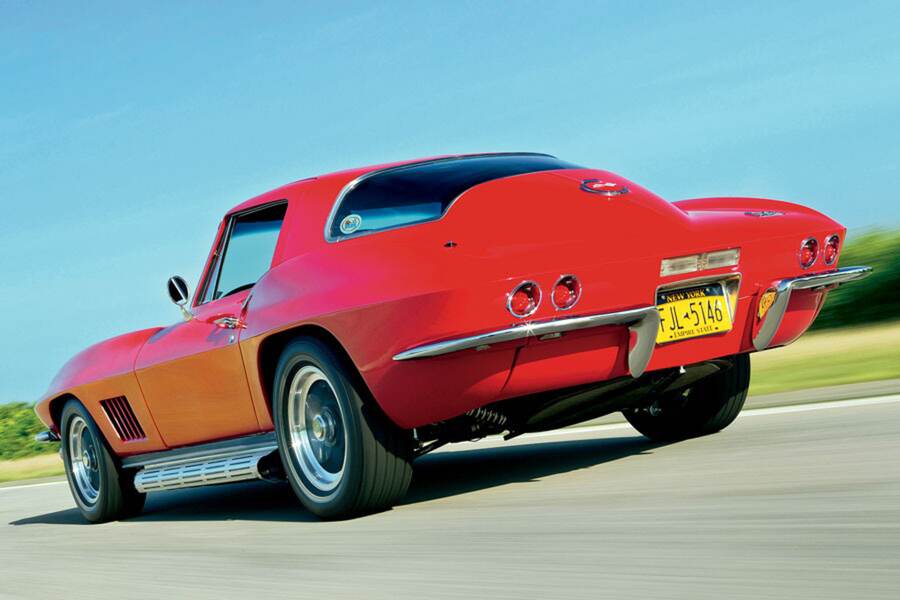 Though the worm-and-sector shaft steering box system that debuted on the ’63 Corvette was infinitely better than the third-arm-bearing arrangement used previously, it is still fairly awful by today’s standards. Even when every component is in perfect working order and adjusted well the steering is somewhat imprecise and borderline sloppy. To overcome this drawback Commons discarded the original steering setup and installed a Steeroids rack-and-pinion unit with a Flaming River tilt column.

The car’s front and rear suspension were similarly modernized with the installation of a Shark Bite coil-over system purchased from Speed Direct. Compared with the factory setup, this aftermarket arrangement allows for easy adjustment of ride height and noticeably improves all-around handling.

The chassis mods were finished off with a set of American Racing Torque Thrust wheels wearing BF Goodrich P215/65R15 Radial TA tires. These give the car that classic early street fighter look while simultaneously improving ride, handling and braking performance. 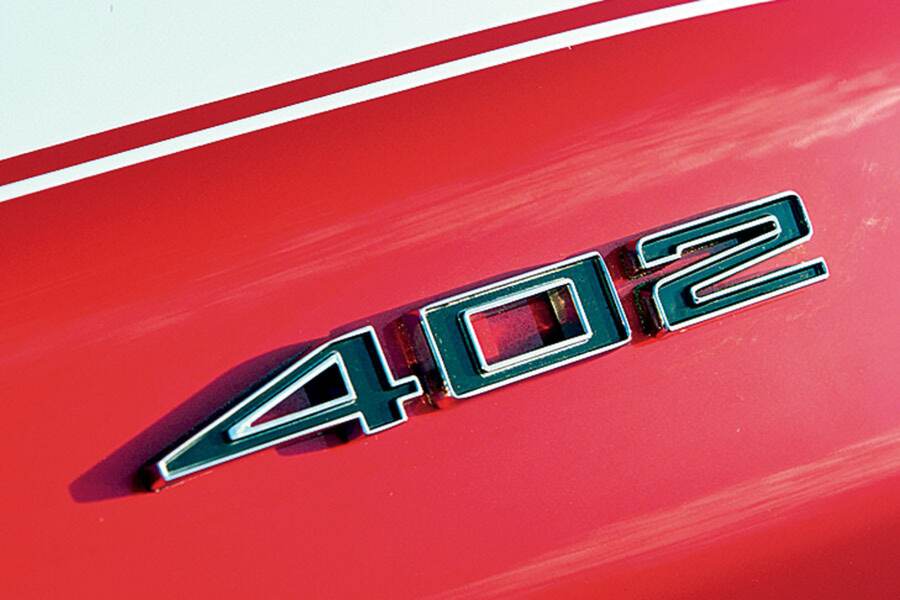 The car’s drivetrain also got rehabilitated. The trailing arms and differential went to Bair’s Corvettes for new bearings and installation of a 3.70:1 ring-and-pinion set. Brand-new half-shafts and universal joints tied the rebuilt differential to the rebuilt hubs. For safety’s sake a new braking system, including stainless-steel sleeved calipers at all four corners, was fitted.

Commons loves the look of optional factory side pipes but felt they were too restrictive for the car’s potent new engine. To solve that problem he had Classic Chambered whip up a set of custom-made pipes that look stock but flow better. They are mated to Patriot Block Hugger headers that further aid exhaust gas flow while delivering that much-loved stock side-pipe rumble.

With all the mechanical work completed, Commons turned his attention to the interior. He added factory optional headrests to the original seats and re-skinned them with correct reproduction vinyl covers from Al Knoch Interiors. After smothering the floor with Dynamat acoustic insulation he installed reproduction factory-style carpeting that was also sourced from Al Knoch. For improved safety, Commons bolted in three-point harnesses from Eckler’s. For sanity’s sake, he replaced the anemic original AM/FM radio with a Custom Autosound AM/FM stereo featuring an iPod input and power antenna. 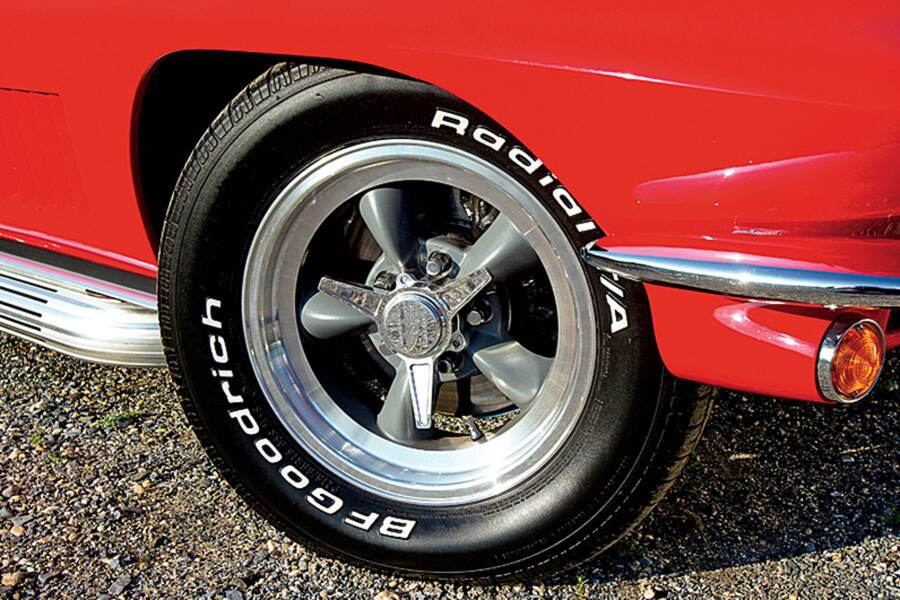 Since completing the car’s build several years ago, Commons has driven it regularly, enjoying all the benefits that his careful planning and precise execution produced. “The car is great fun to drive,” he states with obvious glee. “At highway speeds in fifth gear the engine turns about 2,000 rpm, keeping the cockpit reasonably quiet. The car has all the comforts of power rack-and-pinion steering, power brakes and windows, air-conditioning and an iPod stereo, yet it retains the raucous, raw experience of a high-powered, side-exhaust ’67 Corvette. ” 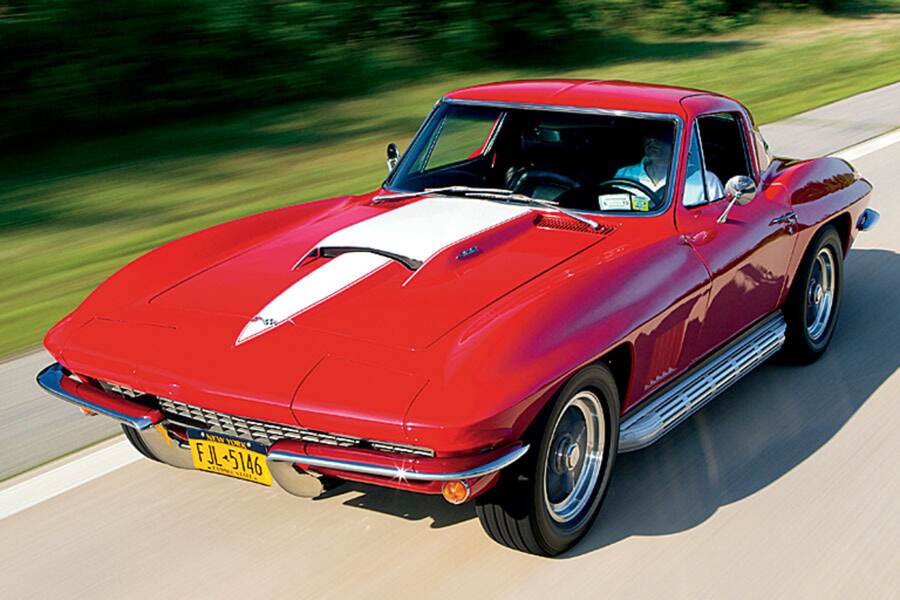 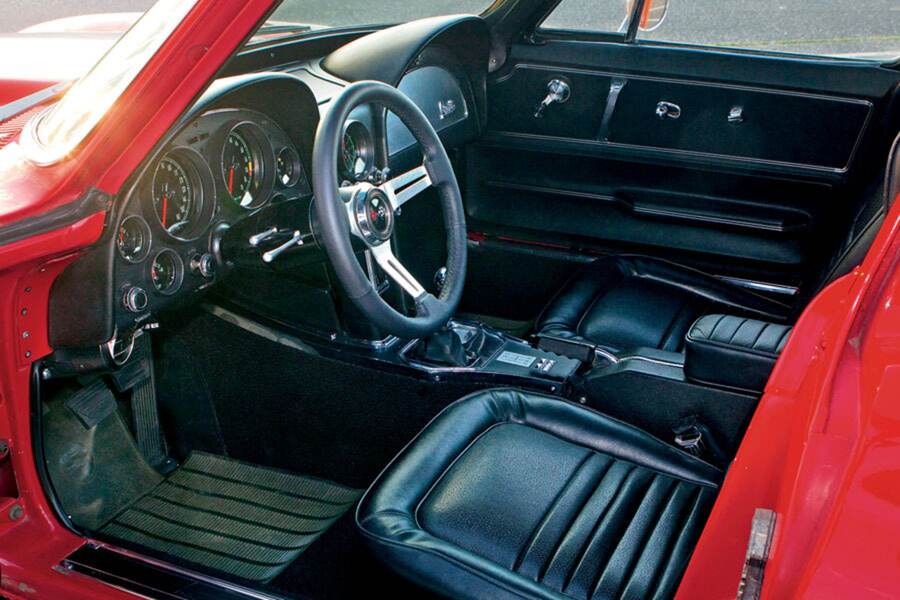 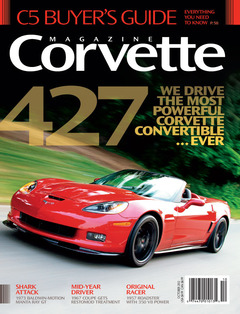