Lethal Performance attempts to crack the 200-mph barrier at the Texas Mile with a modified C6 ZR1. 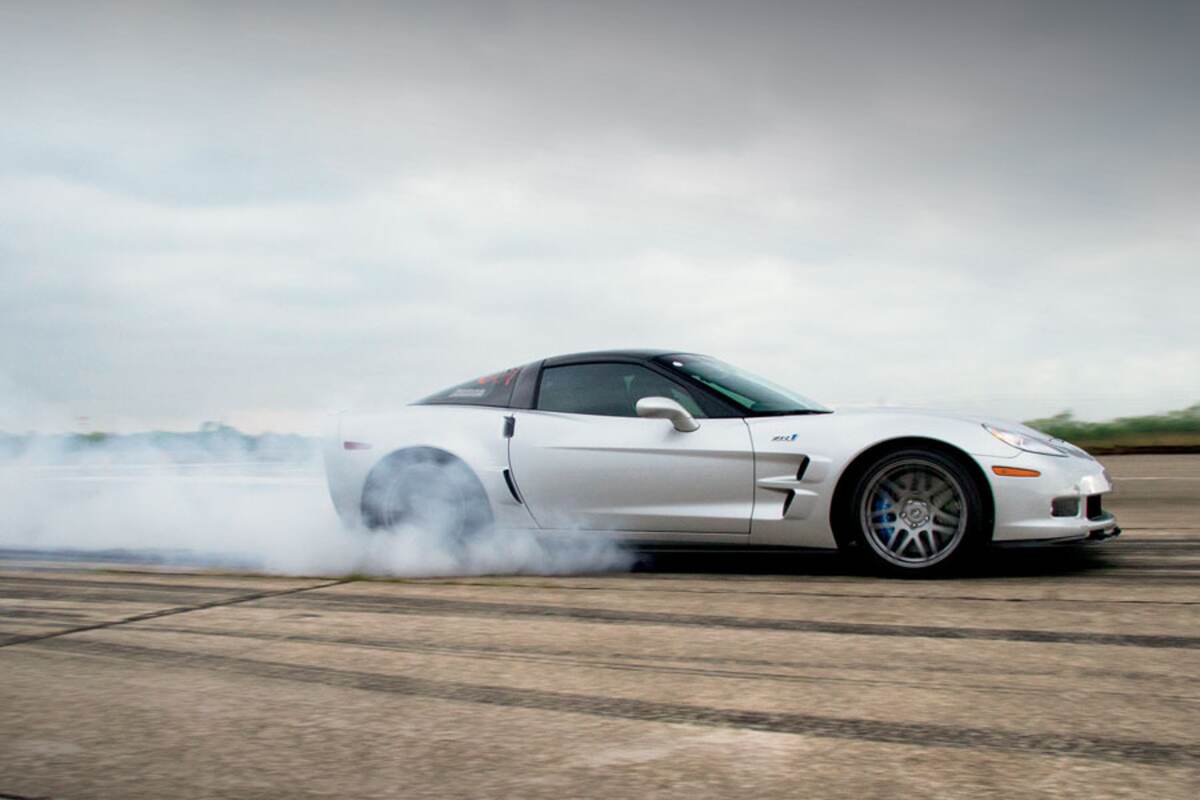 EVERYONE KNOWS THE STANDARD ZR1 IS ONE OF THE FASTEST sports cars money can buy. Propelled by its 638-horsepower LS9 engine, this Corvette can blast through the quarter mile in 11.4 seconds and attain a top speed of 205 mph. It accomplishes these feats while remaining a comfortable street cruiser; it is no one-trick pony. The challenge for those wanting to extract even more performance from the ZR1 is to do so without ruining its drivability. That was Lethal Performance’s aim when it began modifying the ’09 ZR1 on these pages. It wanted to drop the Corvette’s quarter-mile times into the nine-second realm and crack the 200-mph mark in the standing mile without creating a single-purpose race car.

When the silver ZR1 arrived at Lethal’s San Antonio, Texas shop, company owner Danny Gonzales immediately strapped it to the dyno to establish a base line engine-output figure. The number he got was 530 horsepower at the rear wheels. A trip to the drag strip netted a 10.9-second elapsed time at 133 mph, an improvement over the conservative factory figure.

The first change was to upgrade the stock cam to a custom one from Cam Motion. The change was made to improve top-end power as the supercharged 6.2-liter V8 already generated plenty of torque at low rpm. Gonzales estimates the cam change alone added at least 50 horsepower. 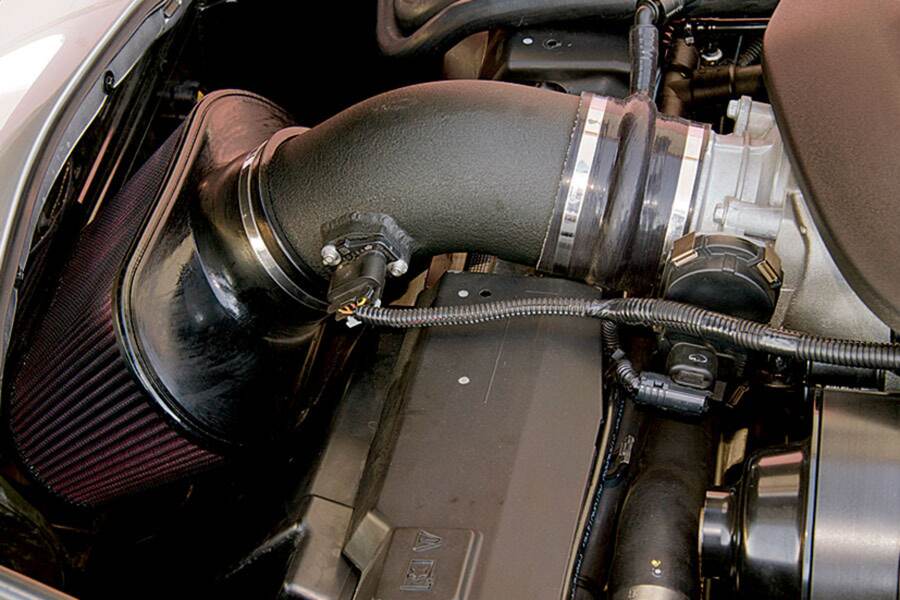 Replacing the standard supercharger pulley came next. In went a Lingenfelter Performance Engineering (LPE) unit, which features a 2.6-inch upper. Then came an LPE/ATI crank damper with 14-percent overdrive. Working in conjunction, these devices get the supercharger to spin faster and therefore produce more boost. While these changes allowed the blower itself to remain stock, the engine was now demanding more fuel than the LS9’s stock injectors could provide, so a set of higher-capacity 1,000-cc injectors from Injector Dynamics were installed.

One of the few weak points in the LS9 engine is the intake silencer assembly, which makes a tight turn that slows airflow and therefore robs power. Lethal replaced it with an LPE 4-inch air intake that, teamed with a K&N filter, flows about 45 percent more air. The standard 90-mm throttle body was retained.

To speed up the flow of exhaust gasses, Lethal first added a set of 1-7/8-inch headers, but these weren’t an improvement. They were replaced by a set of American Racing 2-inch headers that Gonzales estimates added 25 horsepower to the total. These were cinched down with ARP header studs. 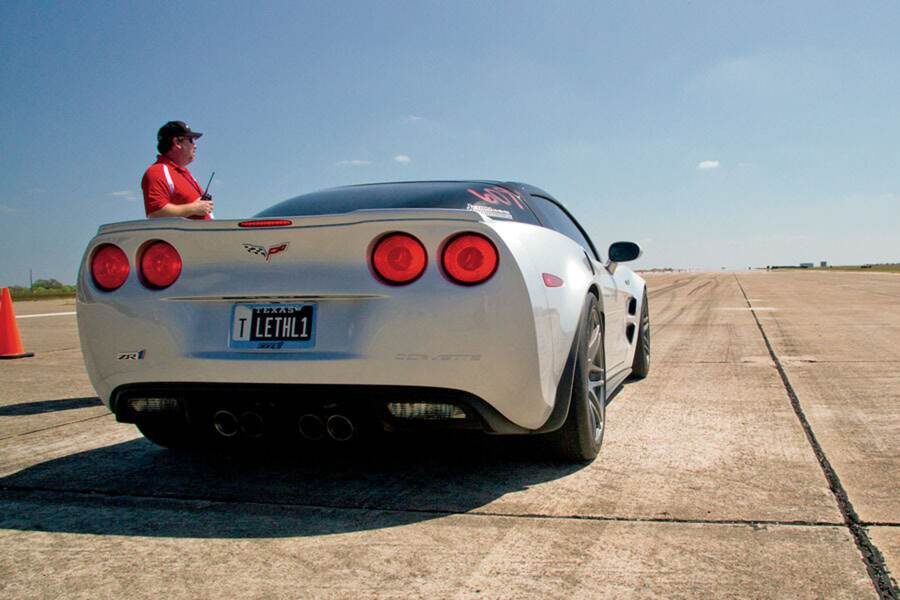 San Antonio summers are sizzling hot; when daytime temperatures dip below 90 degrees, it feels like spring. To help with engine cooling, Lethal upgraded the radiator to an LG Motorsports Super Cool aluminum unit that’s two inches wider than stock. Making it fit in the car required trimming the shroud. The monster heat exchanger works; Gonzales says temperatures stay in the 170-degree range even on hot days, a 20-degree improvement over stock.

Of course, all this technology has to work together to maximize power gains and minimize problems. To that end, Lethal relies on its tuning expert, Shawn Behrendt, who uses HP Tuners equipment to set timing, fuel load and other parameters. The final dyno run revealed the modified LS9 was putting out 753 horsepower at the rear wheels, a whopping 42-percent improvement over stock without any internal head or blower modifications. And, according to Gonzales, the ZR1 is still eminently streetable.

To back up this powerhouse, Lethal replaced the standard twin-disc clutch and flywheel assembly with a three-disc RPS system that uses a special steel flywheel that bolts to the ZR1’s unique 9-bolt crank flange. Unlike some performance clutches, says Gonzales, it has a soft pedal feel and is a pleasure to drive on the street. Lethal also added a Quick Time scattershield to contain the debris should there be a clutch or flywheel failure. 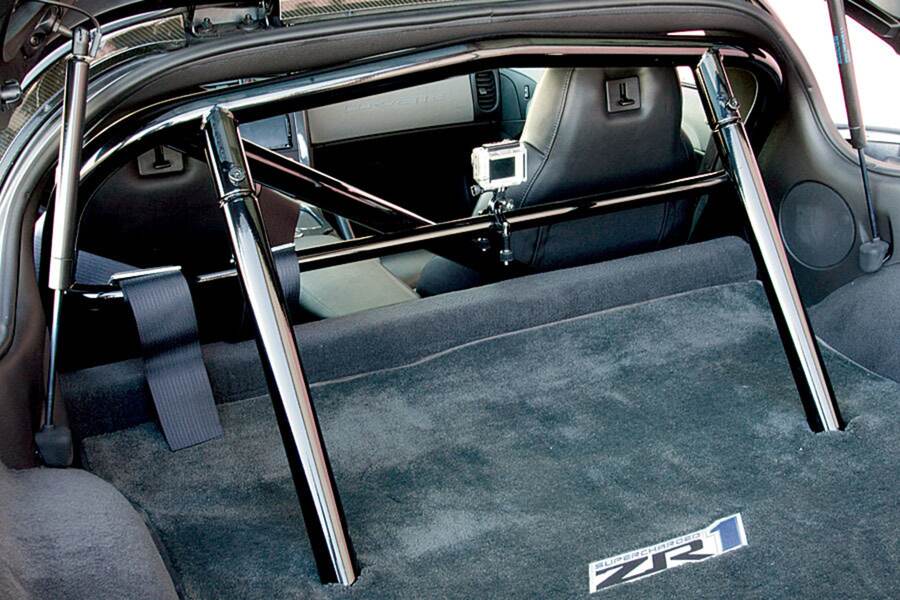 When it came to the ZR1’s brakes, Lethal left well enough alone: You just can’t improve upon the car’s massive carbon-ceramic binders. The same was true of the suspension: The car’s Magnetic Ride Control shocks provided all the damping required for Lethal’s straight-line runs. However, given the car’s speed potential, it did see fit to install a Pfadt roll cage and racing harnesses.

With the silver rocket primed and ready to fire, Lethal took it to the nearest drag strip. At San Antonio Raceway (SAR), Gonzales turned a 9.93-second quarter-mile time with a terminal velocity of 148.9 mph. The 9-second goal had been reached, but the Lethal team wanted more. Later, it brought the Corvette back to SAR and ran a blistering 9.90-second run at 150 mph! A week later, it got the ET down to 9.713 seconds at Royal Purple Raceway in Baytown, Texas. This was good enough to make the silver car one of the quickest street-legal ZR1s in the country. 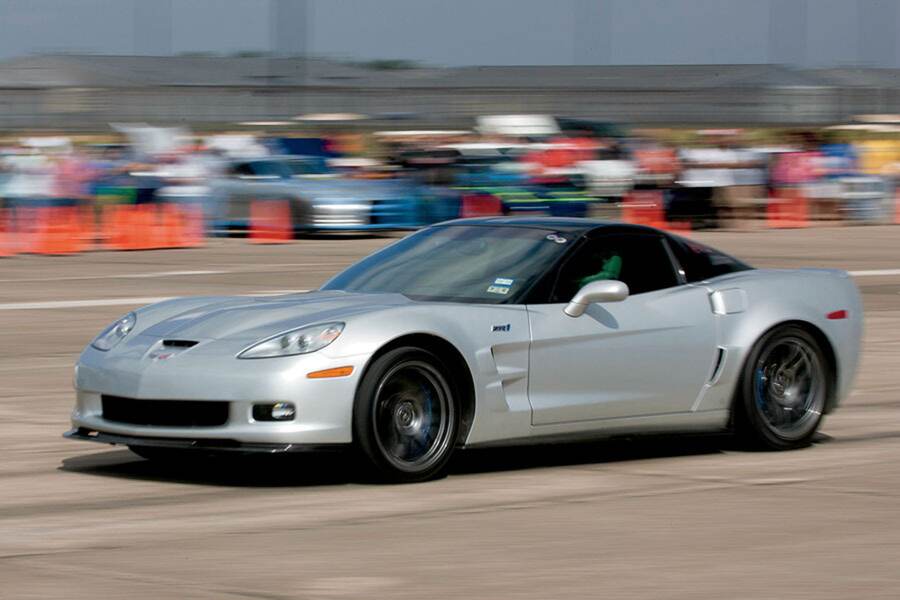 Quarter-mile times are all well and good, but down South one of the most hotly contested tests for bragging rights is the Texas Mile top-speed run held in Beeville, near San Antonio. Contestants line up on a mile-long stretch of runway at Chase Field Industrial Complex just outside of town. The track is smooth, but not pool-table smooth; there are two dips pronounced enough to cause problems for the unwary, and they can be particularly scary for kamikaze motorcycle pilots. The timing trap where top speed is read is placed in the final 132 feet of the track, insuring that the fastest cars have to run the full mile. This leaves out pure dragsters.

Speed addicts and tuning firms from and all over the country make the trek to Beeville twice a year to mash the loud pedal and see who comes away with the fastest speed slips over the course of three days. The Lethal crew couldn’t wait to try out its new road rocket, and were thoughtful enough to invite us along to document the effort. It was an easy call for us, as the majority of production cars entered were Corvettes.

The first runs started at 7:30 a.m., when it was cool enough to make good power. But by noon, the ambient temperature had increased enough that speeds were falling off. The line of cars waiting to run stretched so long that it was impossible to get more than two or three runs each day before hot air took its toll on power. Due to variations in altitude, the humidity and the lack of a two-way run, it’s futile to compare times run at the Texas Mile with those from other tracks. 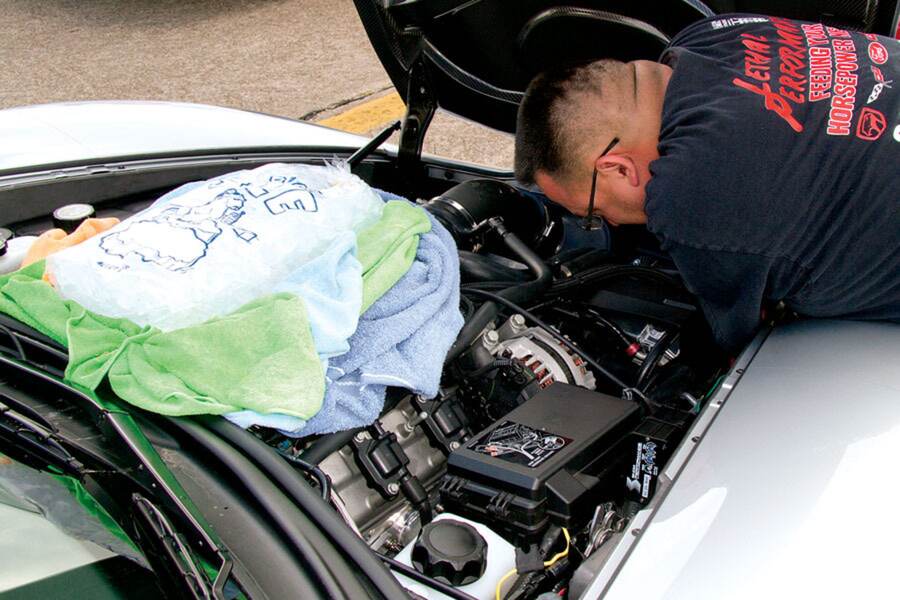 In his first run on Friday morning, Gonzales was clocked at 195.8 mph through the timing lights. He did no better on his subsequent runs that day. Actually, his times slipped backward, so he decided to wait until the next morning to try again.

Saturday was more of the same. The magic 200 mph remained elusive and the heat was causing problems with the Corvette’s engine control system. Specifically, when the ECU saw intake air temperatures at 140 degrees, it retarded timing to prevent piston damage. When the temp hits 180 degrees the ECU switches to another engine map, retarding timing further and cutting more power. Gonzales tried adding a methanol injection kit to the intake, but it ended up costing power, as the ECU richened the fuel/air system to compensate. His best Saturday run was a 195.7 mph.

Sunday was the last chance to make more speed, and Gonzales and partner Joe Michael Garcia iced down the intercooler in an effort to reduce intake air temperature. They also removed the GM relay that controls the intercooler recirculating pump and rigged a switch to pump cooling fluid through the intercooler with the engine off. 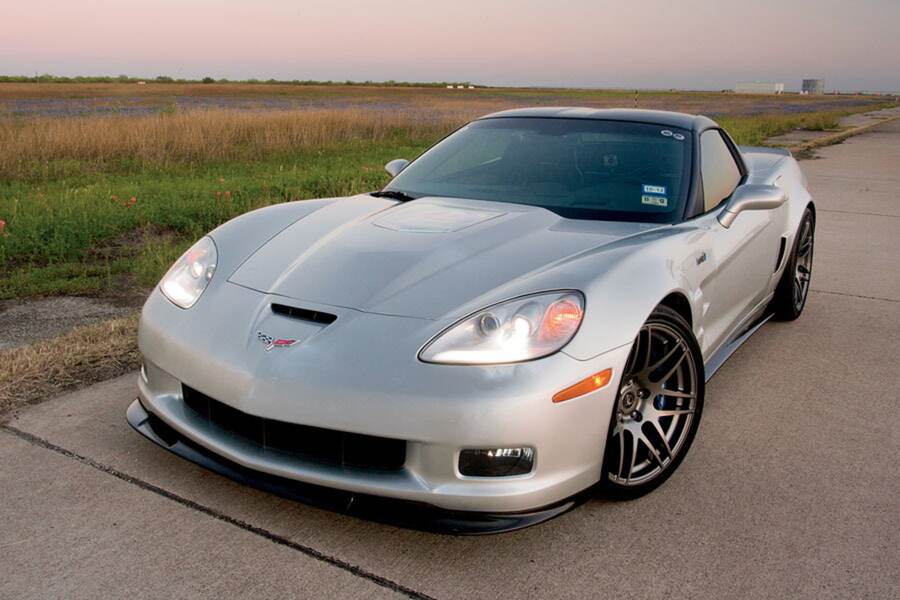 With everything working, the Corvette rocketed to a 197.3 mph—short of the target, but still impressively high. Couple this with the 9.71-second quarter-mile time and you have a ZR1 with some heady stats. Very few ZR1s that have this level of performance are still running the stock supercharger and transmission. And not only is this car still streetable, the upgrades didn’t break the bank. Gonzales estimates it would cost a customer $15K for a similar conversion.

So what’s in store for the silver ZR1? Gonzales is considering adding a recirculating coolant reservoir in the back of the car to drop temps at the intercooler, along with ported heads and a bigger 102-mm throttle body. He thinks upping engine output to 830-850 rear-wheel horsepower would help him break through that pesky 200-mph barrier. 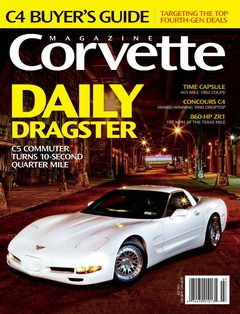