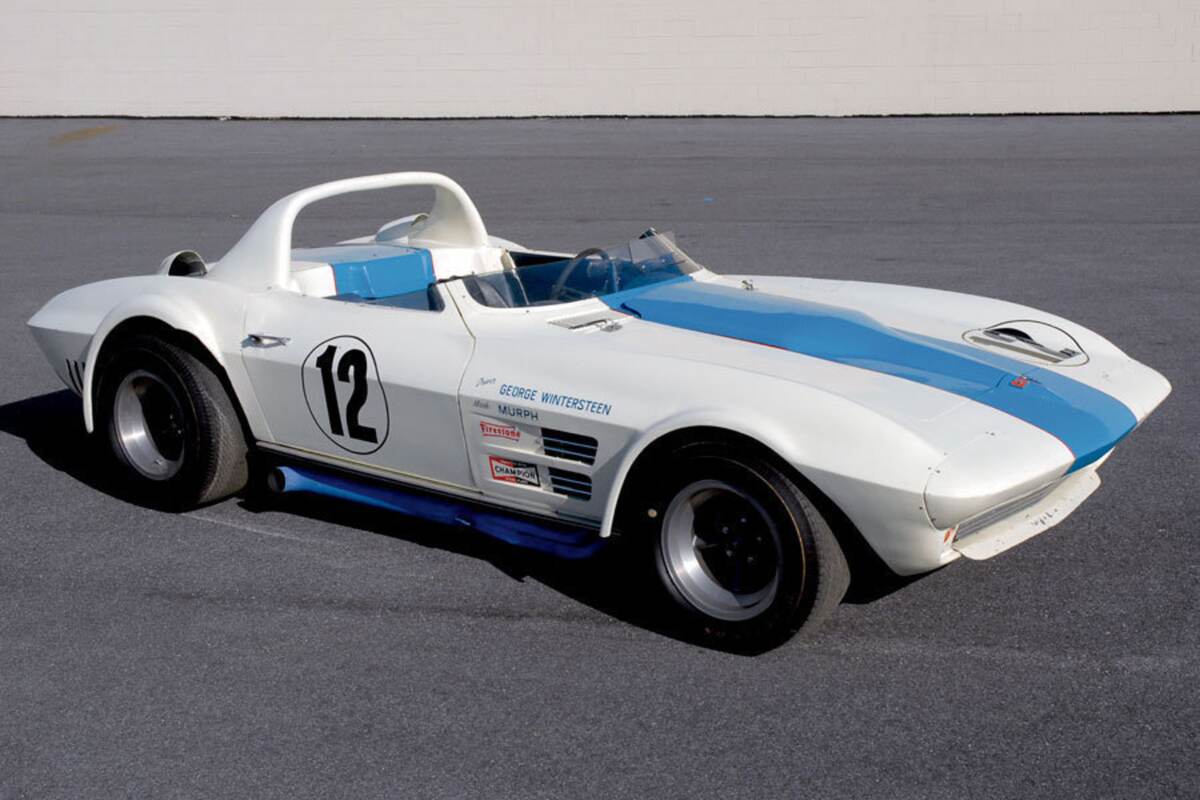 While a love for Corvettes may be one of America’s strongest automotive passions, the model’s true faithful really lose their bearings when it comes to the ’63 Grand Sports, the five race cars built in secret by Corvette chief engineer Zora Arkus-Duntov in 1962. To the uninitiated it may be difficult to explain this crazy attraction for machines that never really won anything important. Even Dr. Frederick Simeone, the new owner of serial number 002—the most original of the Grand Sports—struggled with his decision to buy a car that lacks a serious competition history. But the past is prologue, and before us in the Simeone Foundation Automotive Museum in Philadelphia sits Corvette Grand Sport 002, resplendent in white and blue.

As with its four siblings, this car started out life as a coupe and shared the same basic mechanicals, including an all-aluminum 377-cubic-inch V8 pumping out well over 500 horsepower. This small block boasted dry-sump lubrication, twin ignition and four Weber 58-mm side-draft carbs. It was mated to a four-speed manual transmission.

Suspension was fully independent, with coil springs in front and a transverse leaf spring in the rear. These bits were connected to a lightweight tubular steel frame that weighed 94 pounds less than a standard-issue one. Since road racing was the ultimate goal of the project—Duntov envisioned building a fleet of 125 cars for the FIA’s Grand Touring class—good brakes were fitted: 11.8-inch vented discs with three-piston calipers. With a curb weight hovering around 2,000 pounds—over 1,000 pounds less than a stock Sting Ray—the Grand Sport looked to be a real Cobra contender. 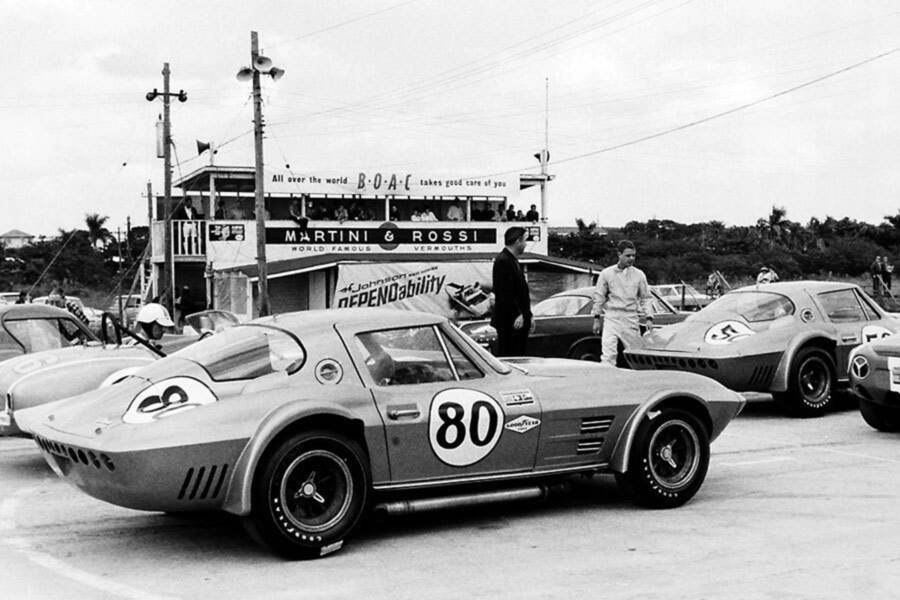 Problem was, GM was not supposed to be building racing cars back in 1962. A gentleman’s agreement existed at the time among American auto manufacturers that they would not participate in or sanction racing. So when GM’s top brass found out that testing of the Grand Sport prototypes was being done at Sebring in late 1962, they blew a gasket and pulled the plug on the project.

Either bravely or foolishly, Duntov made the decision to secretly give one of the Grand Sports to Dick Doane (a Chevy dealer) and another to Grady Davis (a famous oil tycoon) so they could be raced privately. Dick Thompson, driving Davis’s Grand Sport, had some success in SCCA’s C Modified class. He even managed to score a class win at Watkins Glen in August 1963. Duntov next lent three Grand Sports to John Mecom’s racing team, which raced them at Nassau Speed Week in 1963, finishing third, fourth and sixth against some pretty heady competition.

These promising results caused Duntov to set his sights on racing his Grand Sports at Daytona and Le Mans. To that end, he had 001 and 002 modified to extract even more speed. Most significant, their roofs were cut off and low-profile windshields were fitted to reduce aerodynamic drag—a large frontal area was one of the Grand Sport’s drawbacks. However, before a wheel could be turned in anger, GM slammed the door once and for all on the clandestine program. 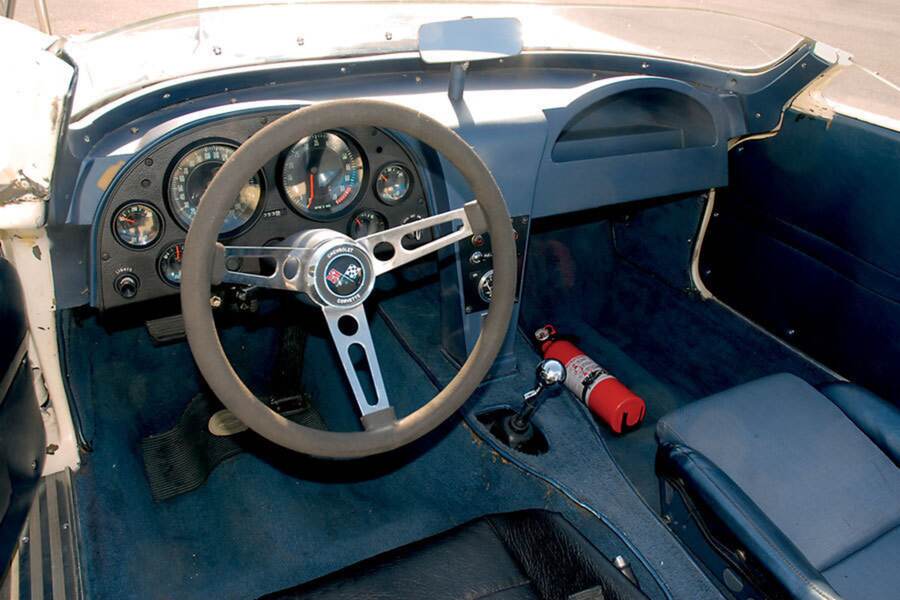 Grand Sport 002 stayed in Chevrolet’s hands until 1965, when it was sold to Roger Penske, who later sold it to George Wintersteen. Wintersteen, who had Penske’s race shop fit a 427 cubic-inch V8, raced it in the 1966 United States Road Racing Championship. However, as we all know, nothing is as dated as last year’s race car, so Grand Sport 002, being a four-year-old racer, was not very competitive—the bigger engine couldn’t compensate for its aging chassis and still-problematic aerodynamics.

The car passed through several hands on its way to Simeone. One owner, Jim Jaeger, custom-ordered an exact duplicate body to preserve the pristine original, allowing the car to be safely vintage raced. However, the copy turned out so perfectly that it was never used; it is now on display in Philadelphia, along with an original-spec 377 cubic-inch engine. 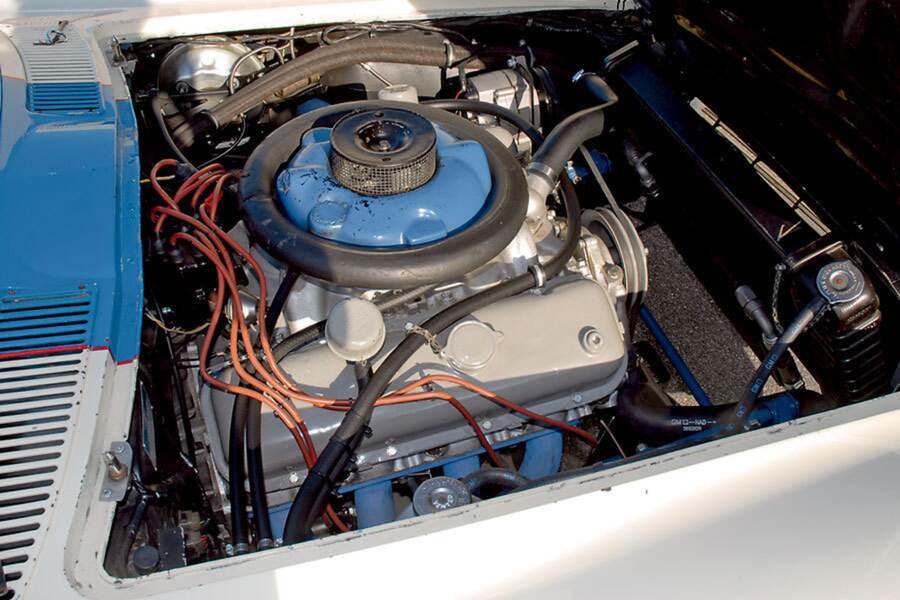 Sometimes a slogan doesn’t mean very much. Take, for example, Exxon’s “Happy Motoring” or Pontiac’s “We Are Driving Excitement”—given the high price of gas and the recent demise of Pontiac, these slogans ring hollow today. However, the Simeone Foundation Automotive Museum’s tag line—“Celebrating the Spirit of Competition”—tells you everything you need to know about what’s inside.

Each of the race cars in the collection was selected over the course of 50 years by one man, the museum’s founder, Frederick Simeone. “My passion for sports cars started like any other kid, as a teenager,” he says. In the case of this world-renowned neurosurgeon, that passion truly blossomed. Simeone’s collection now includes over 60 of the finest automobiles ever built.

Though the museum, which opened to the public in 2008, houses a wide diversity of marques and is expansive both chronologically and mechanically, all of the cars have one thing in common: they are all what Simeone terms “sports racing cars.” 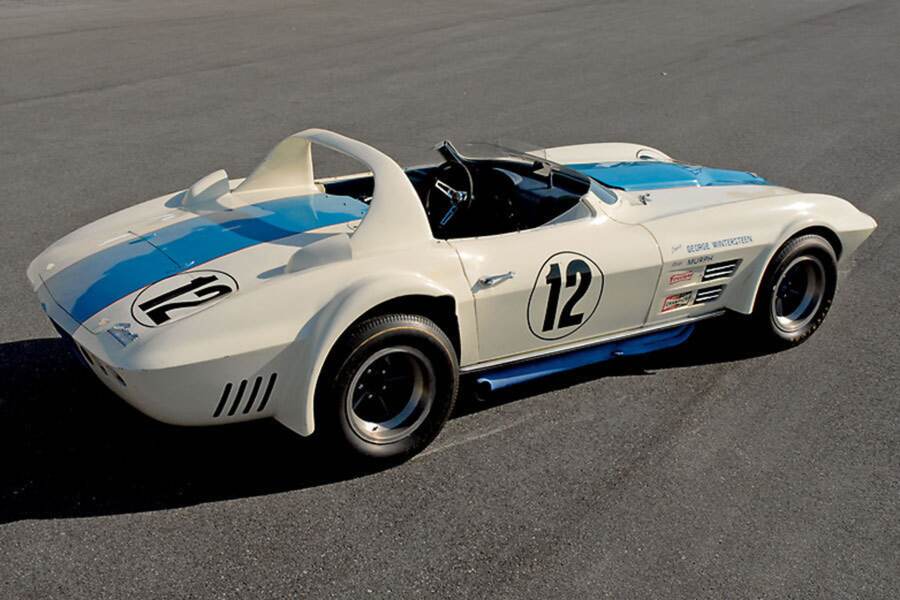 “I was drawn to the sports racing cars,” he explains, “and I think…there were three things about [them that attracted me]. Number one, they were exciting to drive and, unlike open-wheel race cars, you could drive them on the road. Number two, they were good-looking. There was a definite effort to make them attractive—to make them saleable. I believe anything that’s streamlined to make it go faster almost inherently looks better. The old adage that form follows function still applies. The third reason was that they often had interesting histories…[they were] associated with great races, great drivers and speed records.”

Simeone has obviously put a lot of thought into the appeal of this tiny sliver of automotive history. Not surprisingly, given his profession, he understands the appeal for such cars on a scientific level. “I figured [it] out when I started to do some neurophysiology studies,” says the physician. “It turns out that competition, like the need for food and other emotions, is a specific biological function; it isn’t just something that we learn. Our brain has a mechanism that makes us compete and this is how we learn to survive. And, in fact, any organism that doesn’t learn to compete will probably become extinct. I finally realized, the DNA of sports-car collecting for me was competition.”

Simeone emphasized that his overriding philosophy has been to find the best sports racing cars with the best histories—that is, winning records. If possible, he buys machines that are in original, unrestored condition. He seldom has wavered from these guidelines over the past five decades. 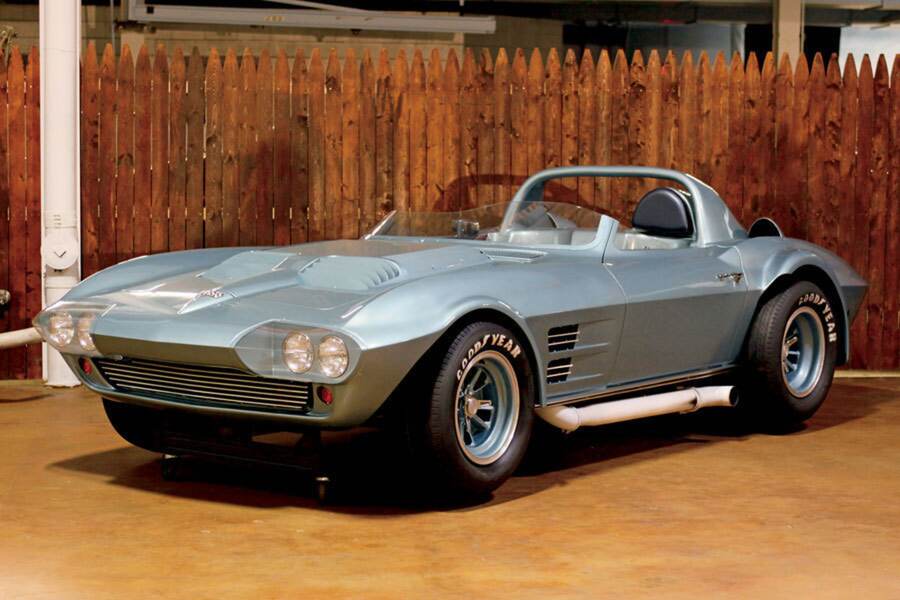 Gradually, Simeone has managed to take almost all of the refrigerator magnets off his refrigerator and put the greatest sports racers in his museum, as well as some “special American sports cars,” including a Mercer Raceabout, a Stutz Bearcat and an Auburn Speedster. He also has some much racier American machinery, such as a Cobra Daytona Coupe and a pair of big-block Ford GTs. But until recently, the collection did not include a single Corvette. 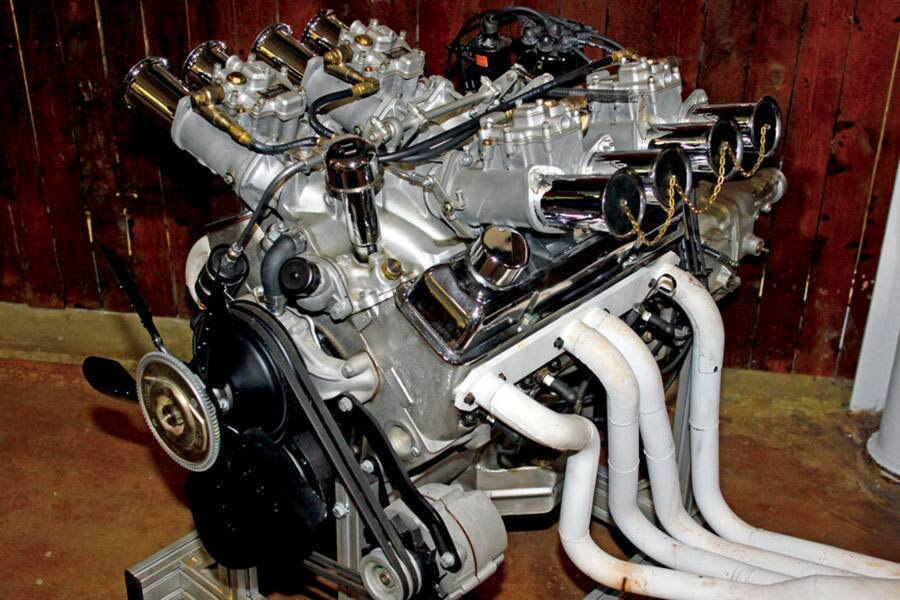 For the most part, it was Simeone’s high standards that stood in the way of the Chevy’s inclusion—not just any Corvette race car would do. It had to be truly special, have a racing pedigree and be unrestored. In the end, only Grand Sport 002 fit the bill, though even it had a serious drawback: It never won a race.

If you have been following the auction scene recently, you may recall that Grand Sport 002 went under the hammer in January 2009. Although the bidding reached nearly $5 million, it did not meet the reserve and the car remained unsold. The Corvette was already on Simeone’s list at the time, but he did not bid at the auction. He says he knew that the reserve would probably be set quite high and that the Grand Sport was unlikely to sell. According to Simeone, this auction served another purpose: establishing the car’s fair market value.

Instead of putting 002 up for bid at a later event, the car’s owner decided to sell it privately—and in the end, Simeone was the buyer. The fact that he had a use for the spare body and engine in his museum helped seal the deal. Though Simeone won’t disclose the actual sale price, he says he used a “favorable combination of trades and cash to acquire the car.” He also says that because he has significant financial value in his current collection, he was able to borrow money to complete the transaction at favorable interest rates. 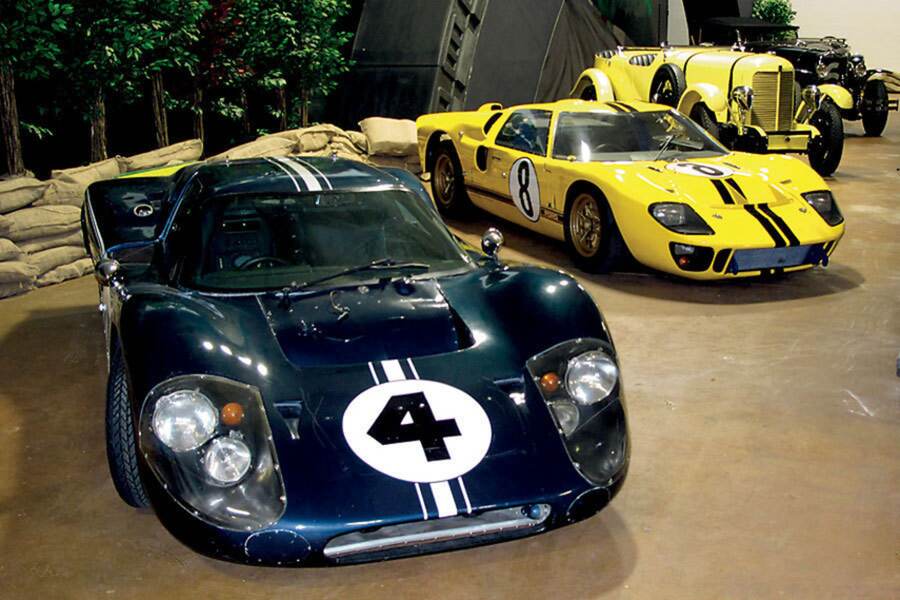 But we wonder if Simeone is still upset that he had to compromise on his long-standing rules, seeing as Grand Sport 002, no matter how you slice it, never won anything. “It bothers me a lot,” he says. “I almost didn’t buy it because of that. I just had to bite my tongue and break my rules. But you know, you might say the desperation to have a great American sports racer allowed me to compromise on that one point—because of the car’s beauty, originality, power, history. [Those qualities] were all perfect for the collection.”

So now, Corvette Grand Sport 002 is displayed proudly in the same aisle as a Daytona Coupe, and the spare body and engine can be seen in the museum’s American-car wing. This certainly makes for a very good reason to visit Philadelphia. 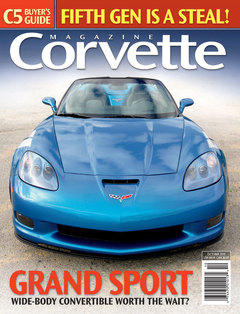