Fork in the Road

We explore two paths to big horsepower: One starts with less and adds more, the other starts with more and adds less. Both involve LMR-tuned C6 Corvettes. 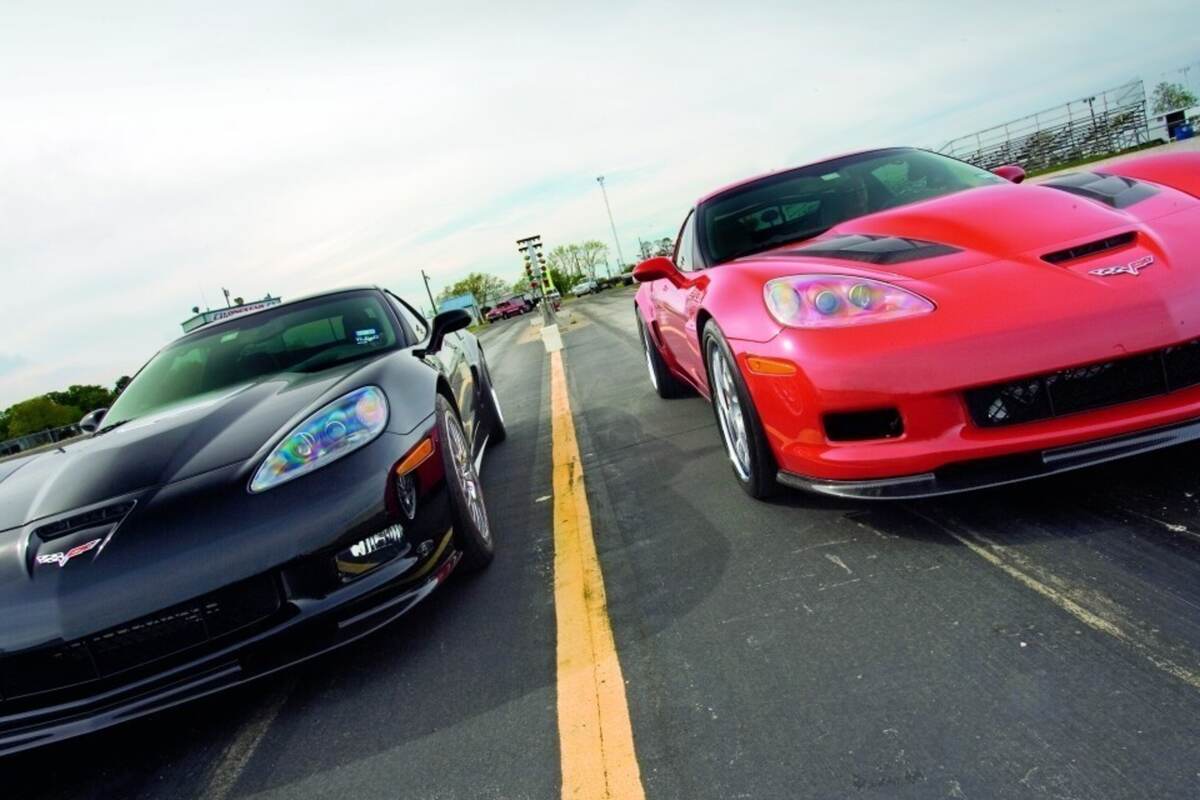 It’s the horsepower junkie’s dilemma: Should I buy a less expensive car and drop a serious stack of money making it faster, or opt for a pricier, more powerful model and invest less in performance mods? We recently had the opportunity to explore these two paths, Corvette-style, thanks to the crew at Late Model Racecraft (LMR) in Houston, Texas. The dueling pair of LMR-tuned cars were a 2009 ZR1 packing an upgraded, 810-horsepower LS9 engine and a 2008 C6 coupe with a monster 1,200-bhp twin-turbo 440-cubic-inch V8. Both offer outrageous levels of performance, but at what price‚ both in terms of actual dollars spent and livability on the road? Gentlemen, choose your weapons!

A standard LS3 coupe is a serious road machine. Even in dead-stock 430-bhp form, it runs the quarter in the mid-12s and tops out at around 190 mph. Considering its MSRP is just under $49,000, the base Corvette offers a ton of performance for the money, and begs the question: “Do you really need any more performance than that?” Perhaps not, but if you’re reading this magazine you definitely want more!

R.C. Cox certainly did. He picked up his automatic-equipped ‚Äô08 C6 new two years ago. The odometer read less than 1,000 miles when the car made its first visit to LMR. In went a Procharger D1 supercharger, a pair of headers, a cam and a new torque converter for the tranny. The result on the LMR chassis dyno was 650 rear-wheel horsepower (rwhp), which was enough to eclipse the output of just about every production car on the road‚ but not enough to satisfy Cox. The car was soon back at LMR. 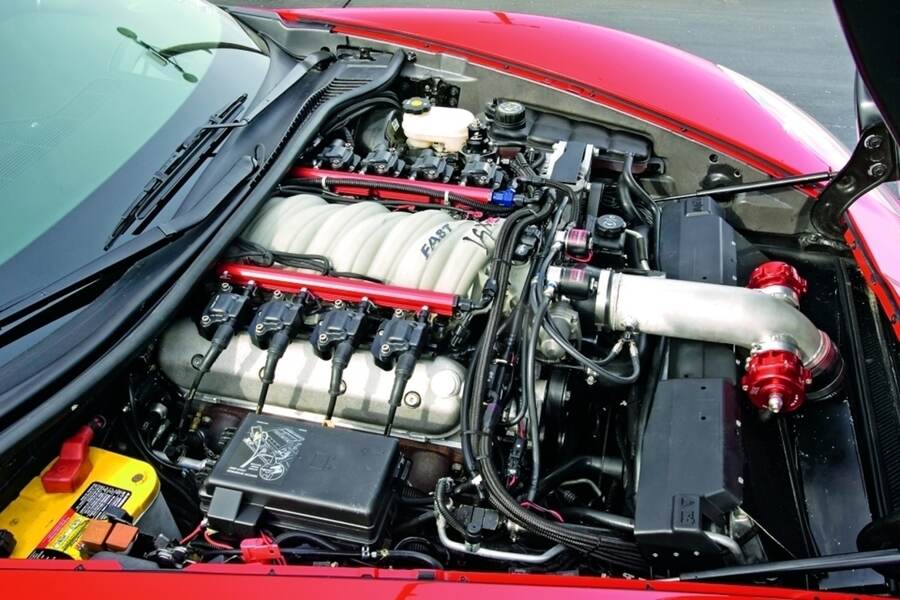 On its second visit, the Corvette was treated to a whole new engine. Out went the supercharged 376-cubic-inch LS3 and in went a turbocharged 440-cubic-inch behemoth. Not content to merely bolt in an off-the-shelf motor, LMR started with a World Products Warhawk six-bolt block, into which it mounted a Callies 4.100 Dragonslayer crank. Callies H-beam rods swing custom Wiseco 9:1 slugs fed by a custom LMR cam grind. The All Pro LS7 Hurricane heads feature Jesel shaft-mount 1.8-ratio rockers and 2.200-inch hollow-stem stainless-steel intake valves and 1.600-inch Inconel exhaust valves.

On the intake side, twin APS GT-35R turbos were bolted on using an APS kit that allowed them to be mounted low, on the bottom side of the engine. A large air-to-air intercooler was also added, along with a Weldon race-spec fuel pump, 86-pound/hour fuel injectors and a custom-fabricated surge tank.

Spent gases are emptied by a pair of APS exhaust manifolds. These feed into a custom 3-inch-diameter oval-tube stainless-steel exhaust system fabbed by LMR partner Josh Ledford. Though B&B Fusion mufflers quiet things down a bit, DMH low-profile electric cutouts allow bystanders to hear the full banshee scream by bypassing the mufflers, adding a few ponies in the bargain. 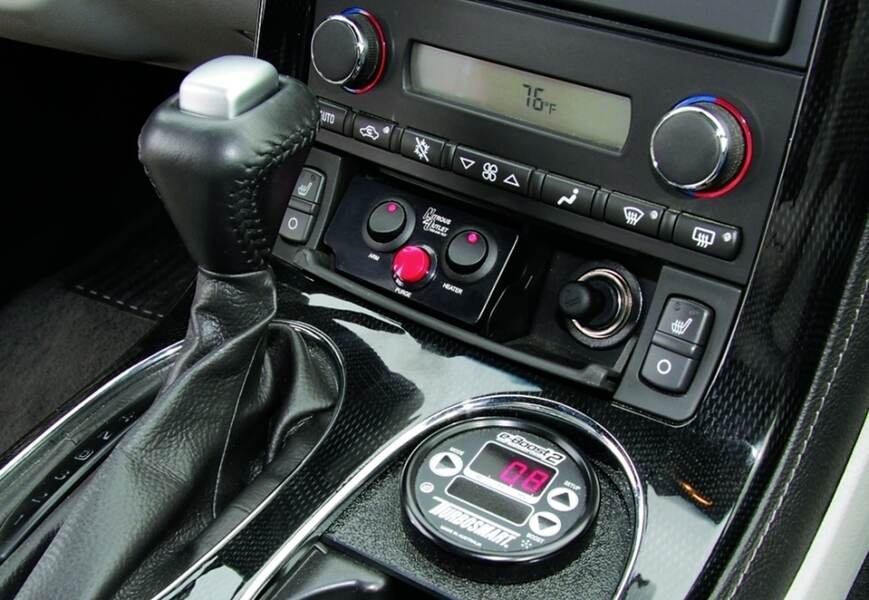 What is the result of all this tuning? A whopping 1151 rwhp, and that’s not counting a 200-horse shot of juice from a Nitrous Outlet nitrous-oxide system.

Getting all that power to the pavement required a lot of drivetrain upgrades. Circle D Transmissions of Houston installed an RPM Transmissions 4L80 automatic coupled with a 3-disc lockup converter. The Driveshaft Shop built a custom driveshaft that can withstand 1,200 horsepower this after the previous shaft came apart on the dyno at 1,000 bhp. This outfit also supplied custom heavy-duty halfshafts. To help cool the monster motor, a custom Ron Davis four-core radiator was installed, along with twin SPAL cooling fans. 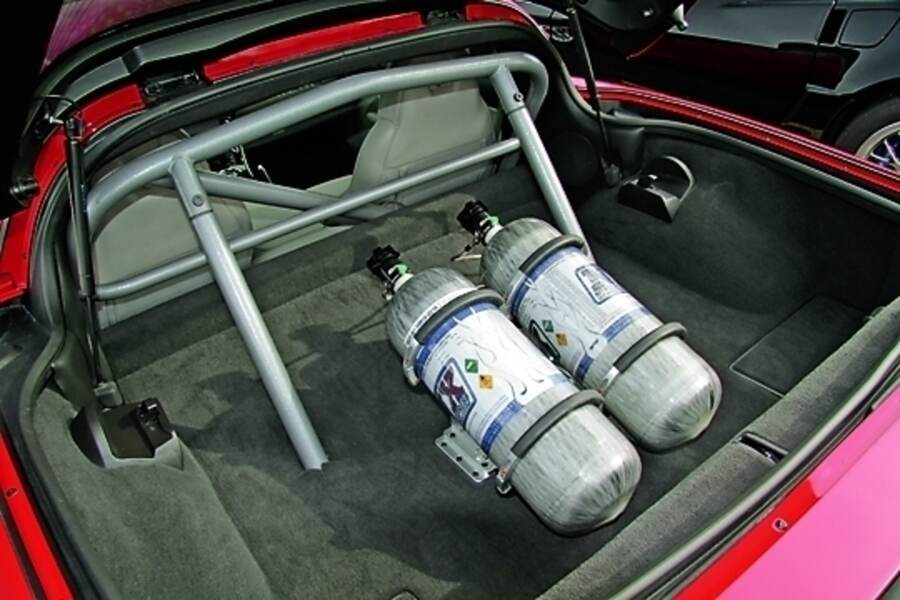 At this point, Cox’s Victory Red coupe had nearly twice the power of a stock ZR1 but nowhere near the suspension or brake sophistication. To give it handling and stopping capabilities to match its newfound muscle, a lot of changes were required. A Z06 rear end with a Quaife 3.42 limited-slip unit was fitted. Pfadt adjustable coil-over shocks were placed at each corner, as were Pfadt brakes (14-inch rotors, 4-piston calipers). A Pfadt half roll cage was added for safety, as well as to stiffen the chassis. One would expect wide tires on such a machine, and this Corvette doesn’t disappoint: Nitto Invo rubber (285/30 front, 345/25 rear) mounted on D2Forged rims (10 × 19-inch front, 12.5 × 20-inch rear).

Cox wanted the beast to look as special as it ran, so he added a factory Z06 body kit with an LG carbon-fiber front splitter and a Hi-Tech Extractor carbon-fiber hood from MTI Racing. The bodywork and paint were handled by Richey Collision in Houston. Inside, the only mods other than the roll cage and twin nitrous bottles, of course‚ a trio of A-pillar-mounted Autometer Nexus gauges that measure boost, transmission temperature and fuel pressure, and a boost controller.

And in the Other Corner

Andrew Alepa also wanted a killer Corvette, but he went about creating one in a different way. Instead of buying a base C6, he started out with a top-of-the line ZR1. However, just like Cox, Alepa found himself driving to LMR not long after returning from the dealership. 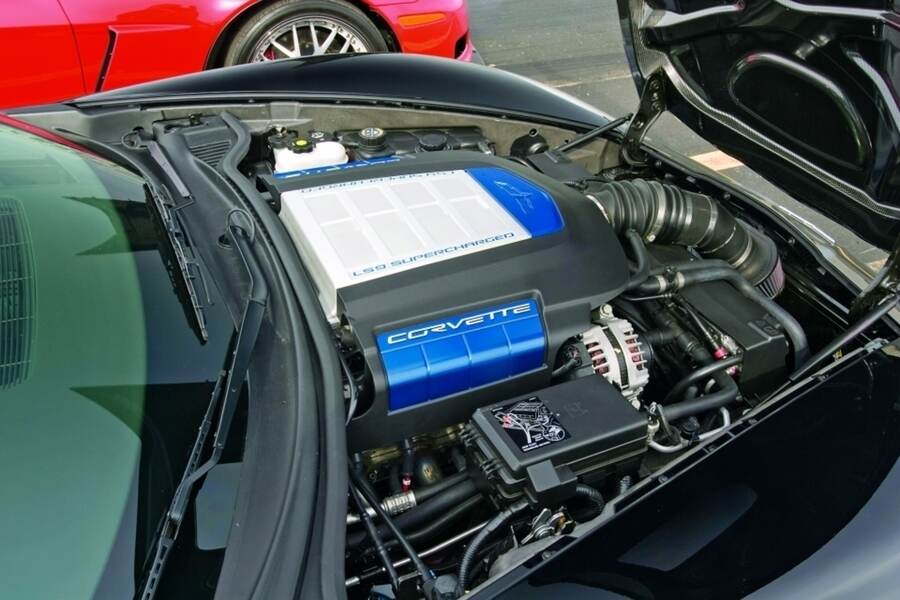 Since the ZR1 already packs 638 bhp from its supercharged LS9 powerplant, LMR didn‚Äôt need to perform a complete engine swap to make the mega power Alepa was after‚Äîbut a standard tune wouldn‚Äôt cut it, either. The company‚Äôs mild Street Stalker upgrade package for the ZR1‚Äîwith American Racing stainless-steel headers, low-restriction catalytic converters, an X-pipe and an air-induction kit wasn’t enough, so it had the standard heads ported by “Slick Rick” McConathy at Naiser Racing Components in Houston. The cam was replaced by a custom grind designed by LMR and machined by Comp Cams. Most significantly, a new pulley ups the boost from 10.5 to 16 pounds. In addition, a bigger intercooler provides a denser intake charge. 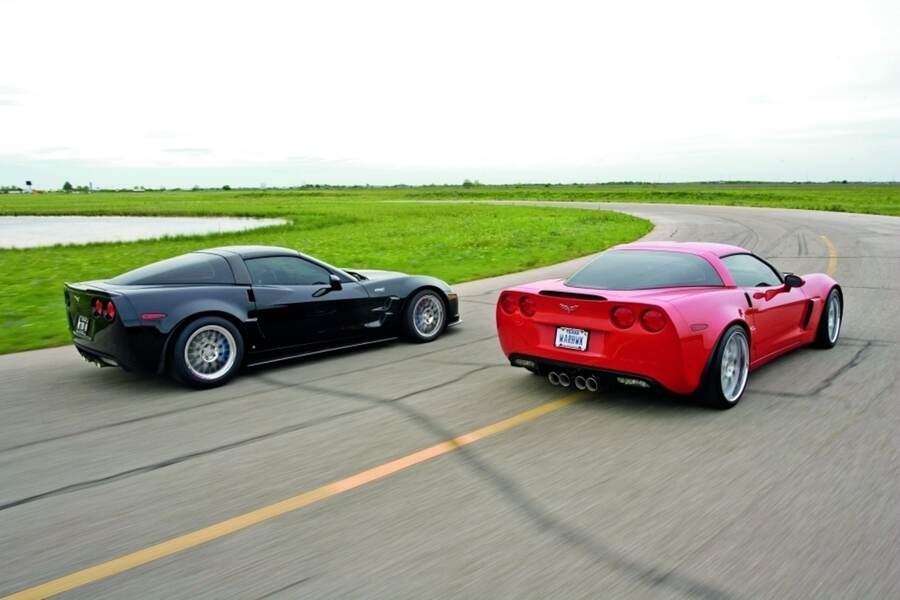 Since the ZR1 already has world-class Magnetic Selective Ride Control suspension and one of the best carbon-ceramic braking systems around, the running gear was left stock, as were the interior and bodywork. For drag-strip use, though, Alepa did buy a set of custom-offset 18-inch CCW SP 18 wheels shod with Mickey Thompson drag radials in back and M&H fronts. LMR’s Ledford says the ZR1 could use Driveshaft Shop halfshafts if serious drag racing was contemplated, but other than that the ZR1 chassis is up to the extra muscle.

So how do the two compare? Alepa‚Äôs best quarter-mile time is a sizzling 9.93 seconds at 140 mph, while Cox has ripped off a 9.40 at 155 mph using only 1,000 of his 1,200 horses. We expect the turbo Vette to be in the low nines when all the power is deployed. But the raw numbers only tell part of the story.

We test-drove the two LMR cars at Lonestar Motorsports Park near Houston. While they both accelerate explosively, the experience of getting them off the line is very different. The ZR1 has been upgraded with a twin-disc clutch that requires a fine touch to operate; it’s almost like having an on-off switch mounted on the floor. The C6’s automatic makes it easier to launch, and it also allows you to keep both hands on the wheel‚Äîa reassuring attribute when confronted with this much horsepower. 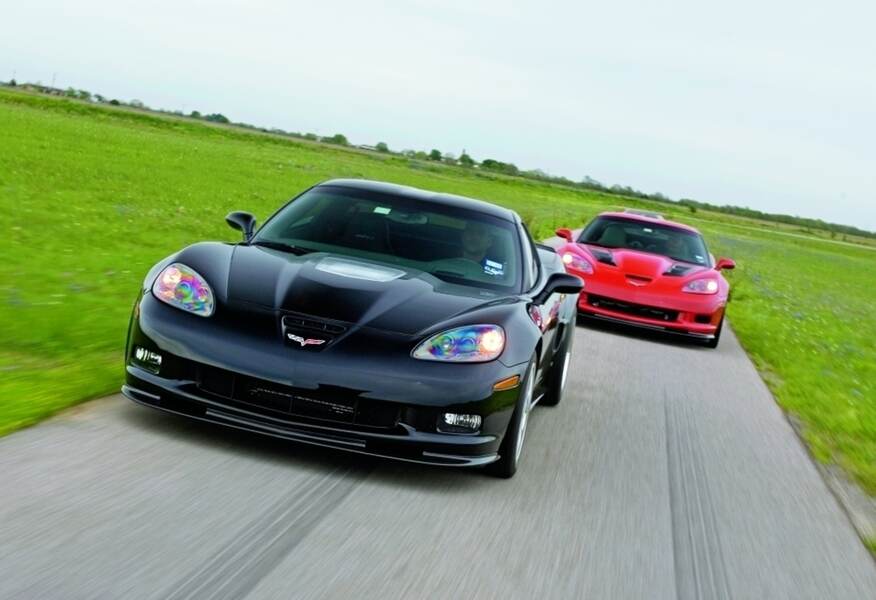 Both cars sound like top-fuel dragsters at idle, particularly when their muffler are bypassed; that steadily rising staccato rumble has to be every Viper and Shelby owner’s worst nightmare.

The blown ZR1 is definitely happier at low speeds than the more radical C6 turbo, but the two Corvettes feel very similar at higher velocities, with prodigious amounts of instantaneous power. In the end, the twin-turbo does cover ground more quickly, but it is also more of a handful to drive than the ZR1.

Not surprisingly, the C6 doesn‚Äôt make as comfortable a street cruiser as the ZR1. It runs warm on hot days. Also, Cox only feeds his monster racing fuel, although Ledford says 93-octane pump gas could be used as long as the boost was dialed back, dropping output down to around 900 horsepower. As already mentioned, the ZR1 loses roughly 60 horsepower on standard fuel.

So how do the two approaches compare in terms of dollars spent? Well, a new C6 coupe starts at around $50K. Bringing it up to the spec of Cox’s Corvette would set you back another $100,000, for a total price of $150K‚Äîgive or take a grand or two. Lopping over 3 seconds from a standard Corvette’s quarter-mile time is an impressive feat, but it comes at a high cost.

A new ZR1 lists for around $107,000. Our featured car had about $20K in upgrades performed on it, for a total expenditure of roughly $130K. Its quarter-mile time dropped about 1.4 seconds, so not only is the ZR1 conversion cheaper overall, it provides a higher performance return on each tuning dollar spent. The supercharged car is also more civilized. But in the end, it is at least a half second slower through the quarter than the sizzling red turbocharged C6.

You make your choice, you pay your money‚ but you win either way. 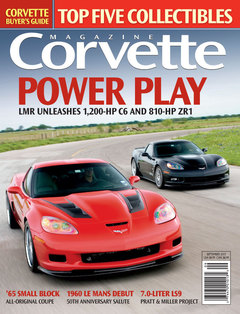