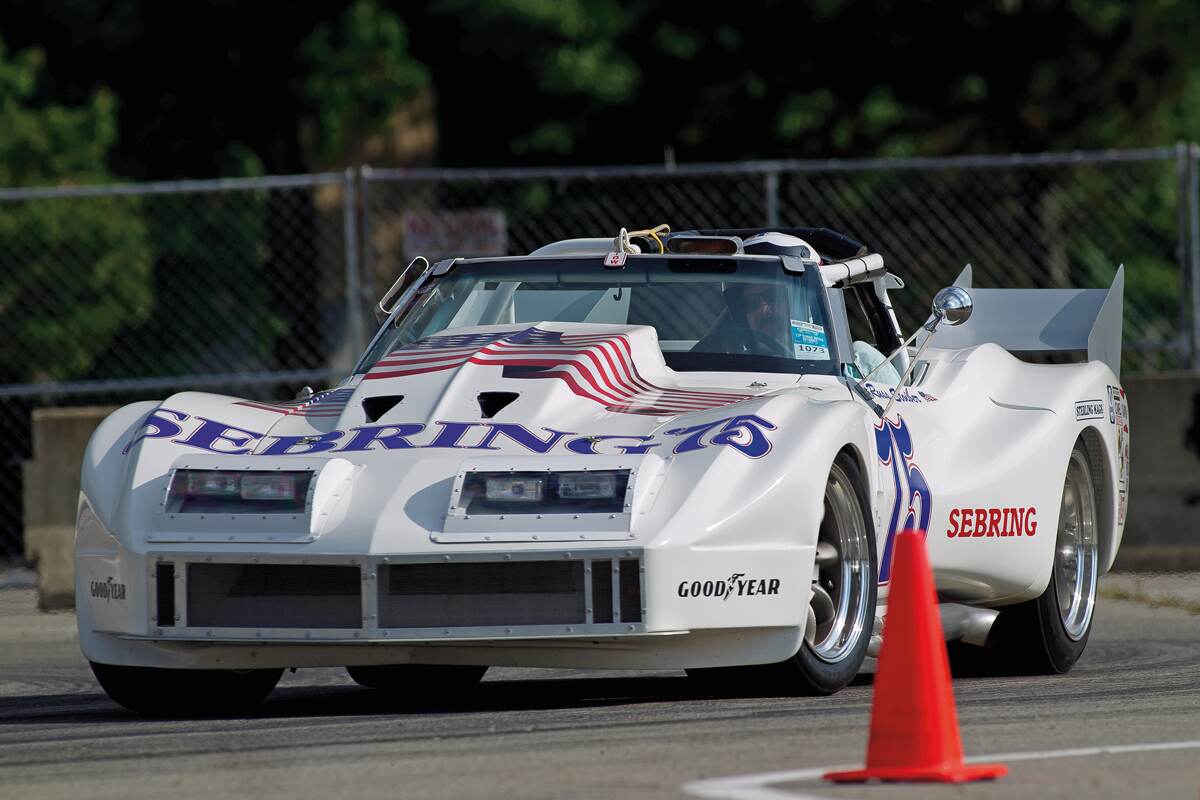 Longer, lower, wider. It almost sounds like market-speak for a deceased GM product whose name began with “P,” but the formula certainly checked all the boxes for the late John Greenwood. Greenwood wanted to go racing with a Corvette, but he knew that the C3 Stingray, as built, simply didn’t cut it in the high-speed aerodynamics department. After lengthy conversations with Corvette engineering chief and former Le Mans racer Zora-Arkus Duntov, Greenwood and his small team put pen to paper, laying out some highly aggressive bodywork. Greenwood hoped that, with huge horsepower, the sleek design might carry him to the front ranks of the world’s fastest and most successful competition machines.

His fearsome big-block Corvettes, which first appeared in 1974, are viewed by many as being the first production-based “wide-body” racecars. Greenwood only built a few for himself, but around a dozen more as kit cars, many of which proved very competitive on the track. He also produced a small number of body-only kits that were offered to the public the following year. Seen here is one of them, owned by long-time owner Russ Stoiber, who describes his near-perfect replica of Greenwood’s legendary 1975 “Spirit of Sebring” as a “tribute car.”

Stoiber, a former sheet-metal worker from Toledo, Ohio, tells us he always wanted to go racing, having grown up fascinated by the IMSA prototype and GT racers he watched on television and in person. Over the years, he’s owned several models of America’s Sports Car, and in 1975 he had a ’72 Vette in his garage. Rather than building a typical production-class racer, Stoiber imagined building a copy of a Greenwood wide-body. It was a worthwhile goal for a skilled craftsman, but it would end up taking much longer to achieve than he originally anticipated. 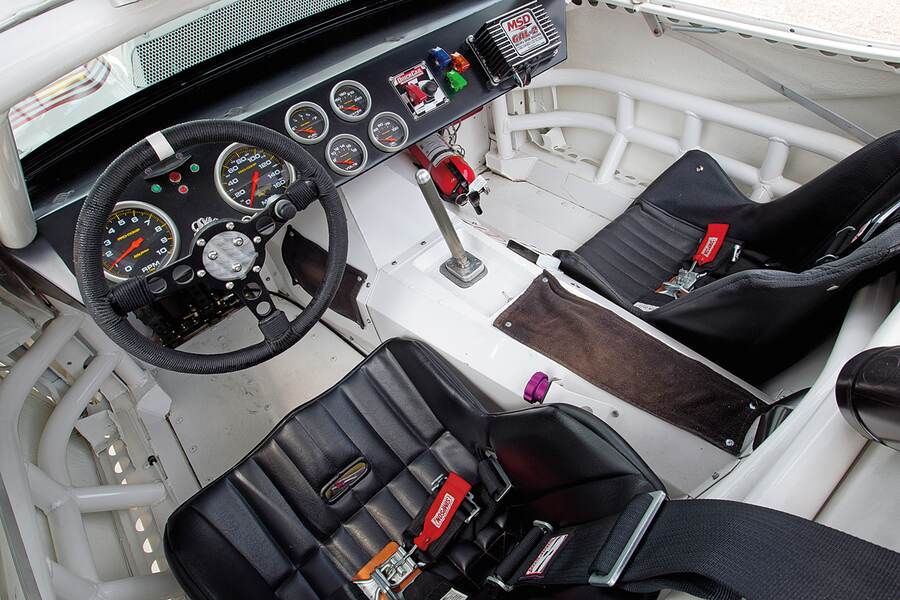 Stoiber began the project by driving north about 30 miles to the Greenwood race shop in Troy, Michigan. There, he wrote a check for what today seems a ridiculously low $1,300 and took home a wide-body IMSA fiberglass package put together by John Greenwood’s brother, Burt. The kit consisted of the front and rear clips, both doors and inner panels, a dashboard and gauge pod, and a transmission cover, plus about a dozen miscellaneous bits that reinforced parts of the doors and body. All of it was gel-coated and ready to paint. Stoiber was also given access to the Greenwoods’ historical documents and period photographs, which would help guide him on his build.

He then began a search for a proper frame on which to base his racer. A friend who owned a ’68 agreed to a swap that involved Stoiber exchanging his ’72, along with some cash. Reasoning that he “couldn’t cut up a perfectly good ’72 Vette,” Stoiber pulled the engine, transmission, and suspension from the car, replaced those items with the corresponding bits from the ’68, then sent it on its way. Importantly, he also retained the ’68’s frame. He then sold everything else from the car and set out to fabricate a stout roll cage that would look at home in a Trans-Am or NASCAR racer.

Once Stoiber determined the type and amount of tubing he’d need to fabricate a full cage like the ones built by Greenwood, he wrote another check and hauled out his cutting and welding equipment. The result was a passenger-compartment structure of 1.75-inch mild steel, with front down-tubes and upper engine bars of 1.625 chromemoly. The latter material was also used for the rear roll-bar support and shock mounts. 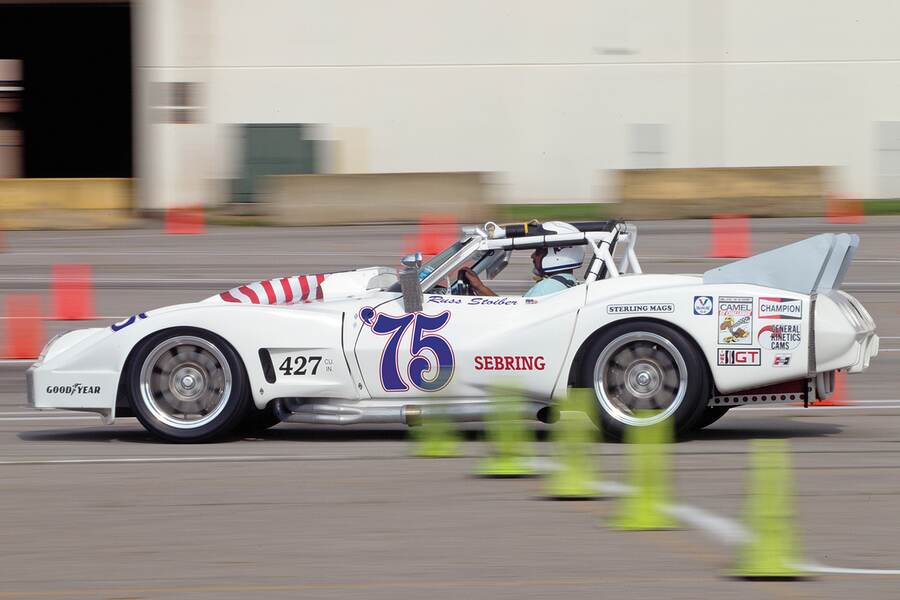 “I mocked up the main roll cage and rear end in 1975…and then life happened,” Stoiber says, referring to his marriage, children, and other fresh priorities. “I cut the roll cage off the frame and saved it, sold the ’68 chassis, and stored the [cage] and body kit in the rafters of my mom and dad’s garage for 44 years.

“At about that time we bought a home in Edgewater, Florida, just south of Daytona Beach, and I moved my garage’s contents and [the Greenwood] body there in a semi-trailer,” he continues. Stoiber’s new home had a large garage space that he further expanded in February 2019, at which point he was finally able to resume work on his Greenwood tribute project.

Stoiber purchased a modern aftermarket replacement frame designed to fit a stock C3 Corvette, but with suspension mounts for C4 A-arms. He then welded the roll-cage assembly to the frame and sent the entire unit off to be powder-coated in white, along with the aluminum interior panels he’d fabricated. He also built a mostly flat belly pan out of aluminum. 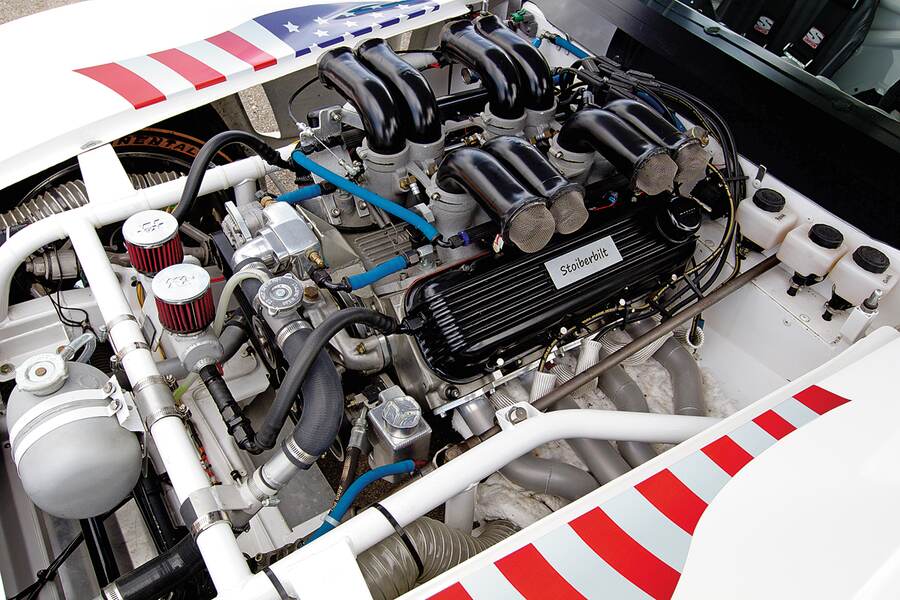 “I took the stock rear-end bars and re-fabricated them with chromemoly and three-quarter-inch Heim-joint rod ends, [then did the same for the] rear lower control arms. The rear transverse spring was removed, and I fitted QA1 coil-overs with 550-pound springs front and rear.”

Stoiber also replaced the stock anti-roll bars with beefier larger parts from Van Steel, and swapped out the bushings for firmer urethane pieces. He then bolted up a power-steering system from a ’96 Corvette, as well as new disc brakes from Wilwood. These featured six-piston calipers in front and four-piston units in back, pushed by a larger master cylinder. The ventilated rotors measure 14 inches in diameter at both ends. 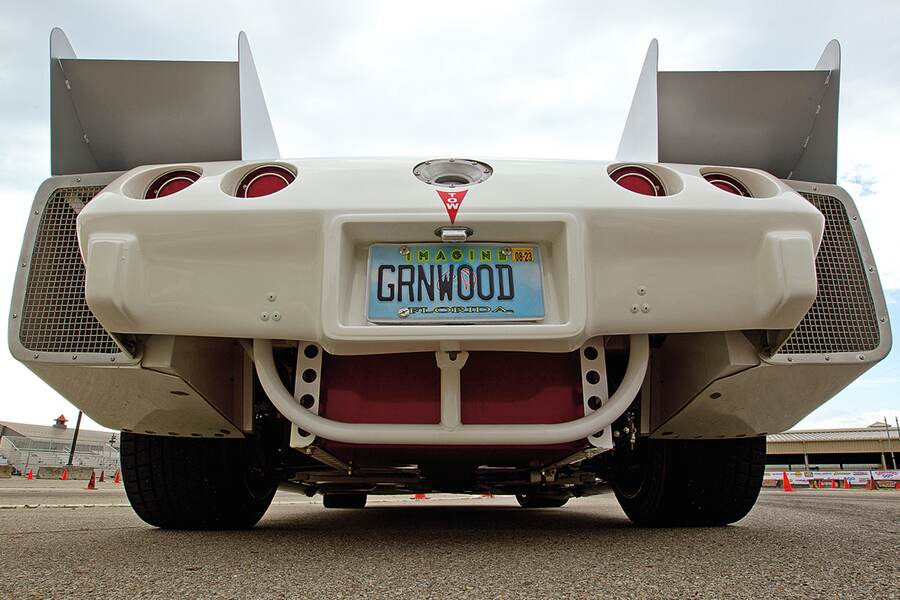 Topping each side of this big V-8 are BRH-124 aluminum cylinder heads with 120cc combustion chambers and 335cc rectangular ports. The valves are motivated by a Comp Cam hydraulic roller cam (.566/.566-inch lift and 242/248 degrees of duration) and Ultra Pro Magnum XD roller rockers. The valley is dominated by a Hilborn “8-stack” fuel-injection system with 2.5-inch bores and “lay-down” intake stacks, just like the original Greenwood powerplant but now converted to EFI. The injectors are also from Hilborn, and the MAF and computer was sourced from FAST. Everything is fed by a Weldon 100 high-capacity electric fuel pump.

Engine cooling is maintained by a Fan Man multiple-pass aluminum radiator and an electric fan mounted in a fully sealed aluminum enclosure. The exhaust system is a custom setup with headers featuring 2.5-inch primaries. “The side pipes were modified swap-meet finds,” says Stoiber. “They can be run with or without mufflers, depending on the noise ordinances at each track.

The engine’s mounting location was lowered by four inches, moved rearward by a full foot, and placed six inches to the right of the center line, alterations Stoiber says give almost perfect side-to-side balance when he’s behind the wheel. The finished car weighs about 2,800 pounds with all fluids aboard, and boasts a front-to-rear weight balance of 51/49 percent. 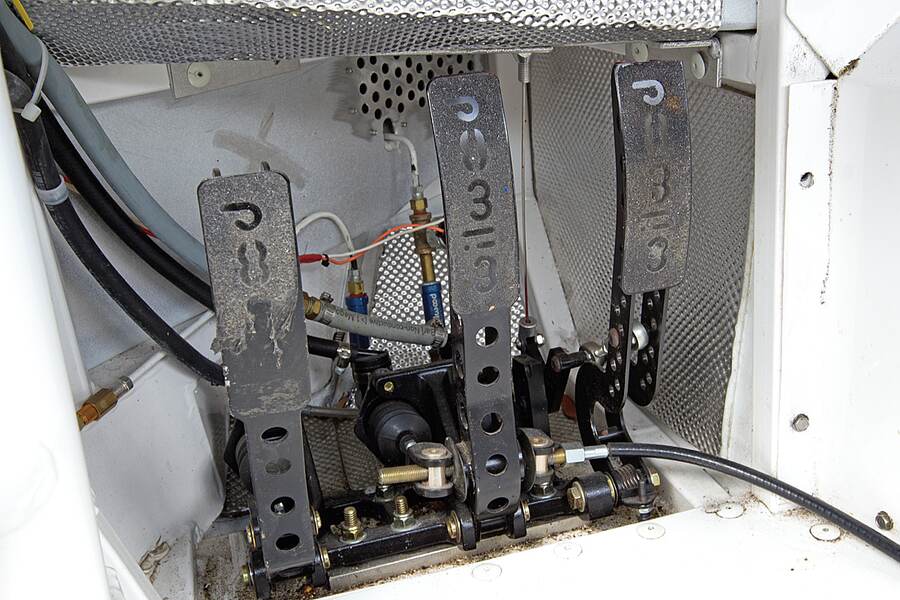 An 11-pound aluminum flywheel and Centerforce racing clutch deliver the power to a six-speed Tremec Magnum XL transmission fitted with a short-shifter stick. From there, a 16-inch driveshaft from the Tremec kit feeds a ’96 Corvette 3.73 rear axle with Positraction. It all reaches the pavement via Minilite-style ET-III aluminum rims, sized 12×18 inches with 305/18 Continental rubber in front and 14×18 inches with 325/18 shoes in the rear.

Inside, Stoiber carefully replicated the cockpit of the Spirit of Sebring as it appeared in 1975, fabricating new aluminum panels that were also powder-coated. The minimalist instrument layout—slightly different than Greenwood’s—contains Pro Comp AutoMeter gauges and the necessary switchgear. 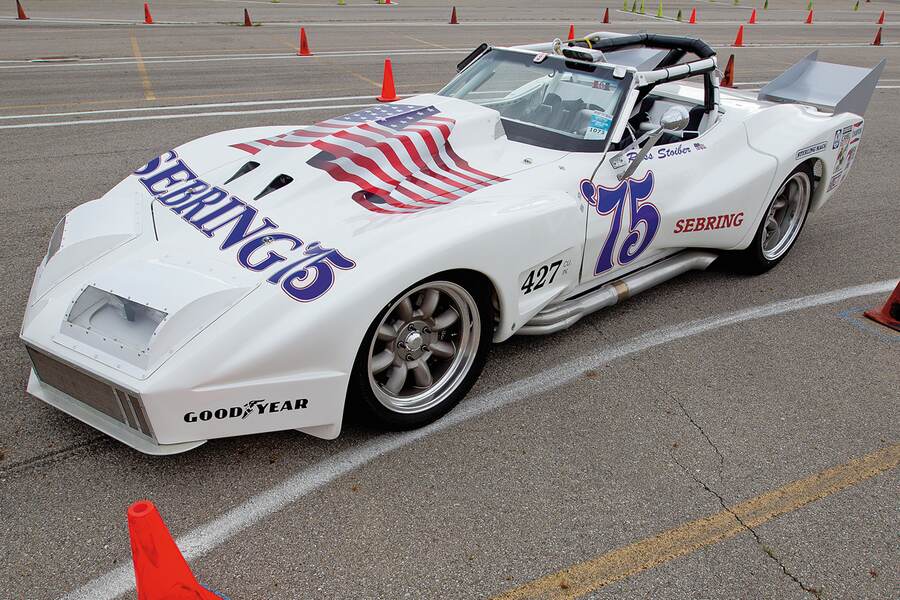 The fabbed aluminum rear air foils were copied from photos of the Greenwood cars. And, as with the original wide-body cars, there is a very light removable roof. Stoiber found one in Arizona that the seller claimed to have been produced from the original Greenwood molds. “Burt Greenwood…couldn’t confirm its authenticity, but I had paid for it so that’s what I used,” he says. “I had raised the [roll] cage up a little for helmet clearance, so I had to cut the roof apart to make it fit.”

The original roof attached with Dzus fasteners, but Stoiber devised a special mount for his tribute car. The setup uses an aluminum plate that fastens to the windshield frame and provides something for the front of the roof to slip into. “I can remove four bolts on the bottom of the sail panels, and the roof just slides out from under front mount,” he says.

While Greenwood’s racers had but a single racing seat and harness set, Stoiber’s has two, so a lucky (and bold) passenger can share his need for speed. “[The car] has great acceleration and handling, [and] the big-block Chevy has great bottom-end torque—at 4,500 rpm it’s flying.” 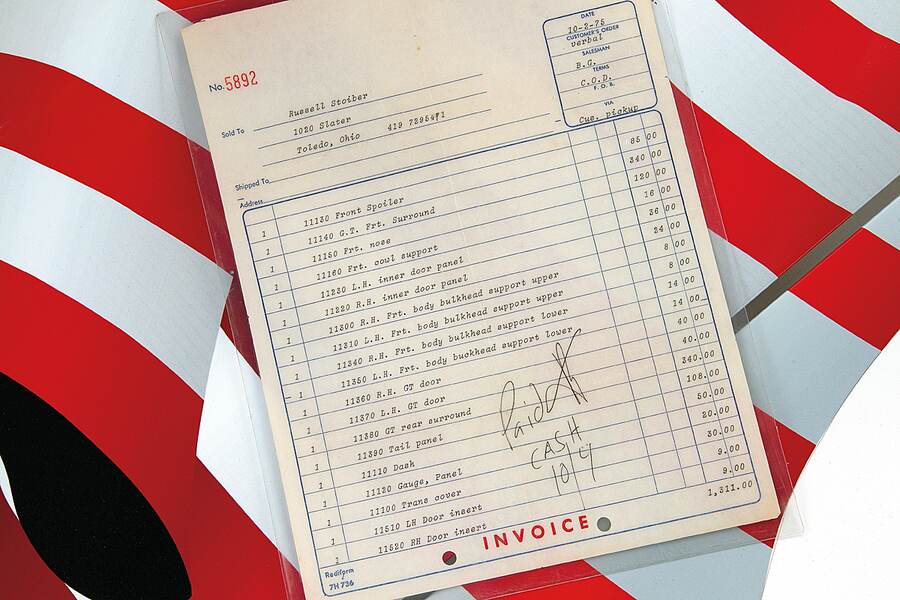 While that boundless thrust may not be a huge benefit in the autocrosses Stoiber occasionally enters, it should come in handy in the road-course events he has planned in the future.

To date Stoiber has invested nearly $50,000 and countless hours in creating his Greenwood near-replica. “This is my…tribute to John and Burt, to honor their memory and legacy, and to show the next generation of Corvette owners what it was like in the wild days, where creativity was the standard. You had to love it to keep something 47 years and then build your dream car.” 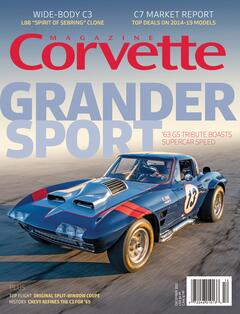