By Virtue of Design 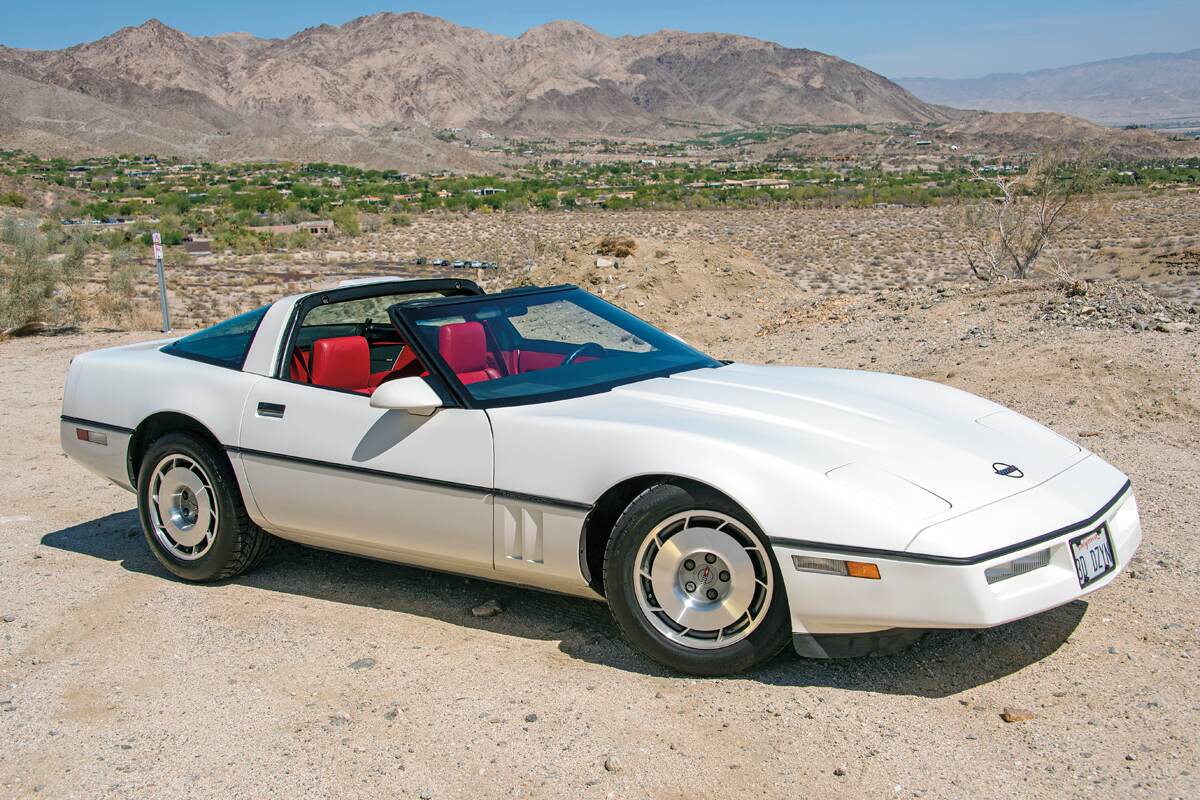 While Roy Shacter sorely missed his ’60 Corvette for many years, having owned it from 1964 to ’69, a chance occurrence eventually filled this void. Years later in 2005, after retiring to Palm Desert, California, he was jogging through the neighborhood one day and spotted a pristine ’87 coupe with a “For Sale” sign in the windshield. The car looked exceptionally clean, so he committed the phone number on the placard to memory and called as soon as he got back into his house. It turned out that the owner wanted to unload the car because he was getting some flak from the partners in his medical practice, who didn’t like the image of a doctor driving a Corvette.

As a retired architect, Schacter had no such reservations. What prompted his quick decision to plunk down 10 big ones for the well-preserved C4? “This is the only year, model, and color that I considered,” he tells us. “[Also the] cost, and the best wheel design.” Why was he so specific in his requirements? His formal training in design helps provide the answer.

Schacter realizes that the C4 isn’t necessarily the most sought-after model of Corvette, but his trained eye drew him to the to the simplicity of the shape and execution of details. “I consider the ’84 to ’87 Corvette an exceptional design and don’t understand [the] lack of appreciation [for it],” he says. Before getting into what he likes about the shape, however, a few observations about the structural aspects of the C4 era in comparison with its two preceding generations.

The chassis layouts on the C2 and C3 Corvettes did not differ all that much, as the frames from 1963 to 1982 received only a few small upgrades over the years. The body, of course, changed markedly with the switch to the C3 model in ’68, though not for the better in every sense. For example, the C3’s wind resistance was actually worse than the C2’s, and scarcely better than that of the C1. But from a sales standpoint, GM designer and executive Bill Mitchell proved to be right in emphasizing curvaceous styling over wind-cheating aerodynamics. 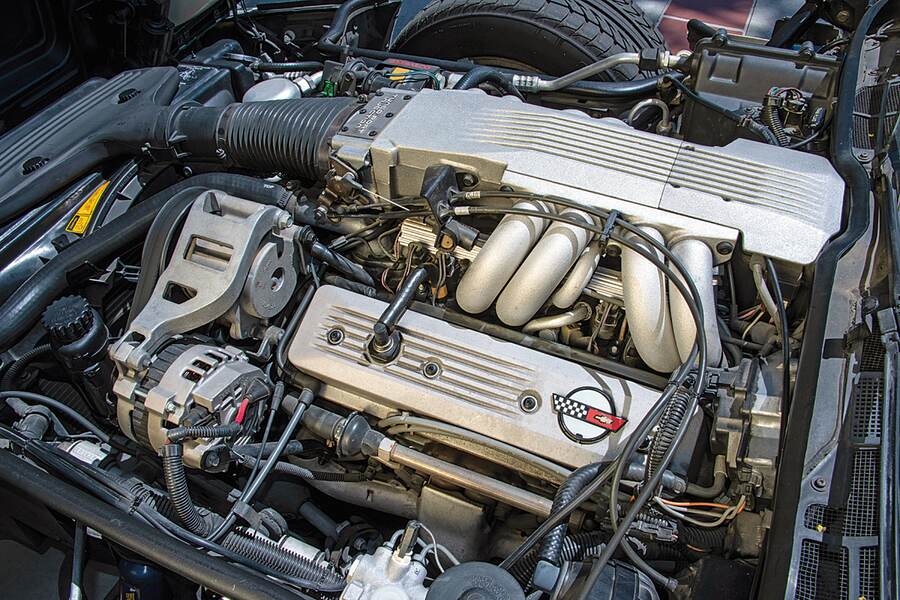 In developing the C4, engineers and designers didn’t clash over form versus function. Instead, they partnered and (mostly) cooperated to create a hard-edged, angular car with some traditional Corvette styling cues, while also being endowed with significantly improved aerodynamics and handling.

The C4 chassis was a clean-sheet departure, a complete redesign of the car’s construction. It was headed up by Dave McLellan, who took over as Corvette’s chief engineer in 1975 and began working on the C4 in January of 1979. In marked contrast to the its predecessor, the fourth-gen model had far fewer parts and was no longer a “body on frame” setup.

Instead it was built around a “uniframe” consisting of a perimeter frame as a base for a stronger structural assembly. This assembly included the door posts, windshield support, upper rear span (also known as the “halo”), and a portion of the floor pan. The new configuration required higher door sills, which helped preserve a measure of stiffness when the originally proposed T-top configuration was replaced partway through the process with a Targa roof. (The latter change was made at the behest of styling executives, marking one notable instance of disagreement with the engineering team.)

Lower, wider, and shorter than its predecessor, the C4 featured an engine that was mounted more rearward as well. In addition, the transmission connected to the differential with an aluminum C-section beam that created a rigid “backbone” structure. This made all of these components stressed members of the chassis structure. The transmission tunnel was widened to allow for exhaust routing, and the front/rear wheel tracks were pushed out. 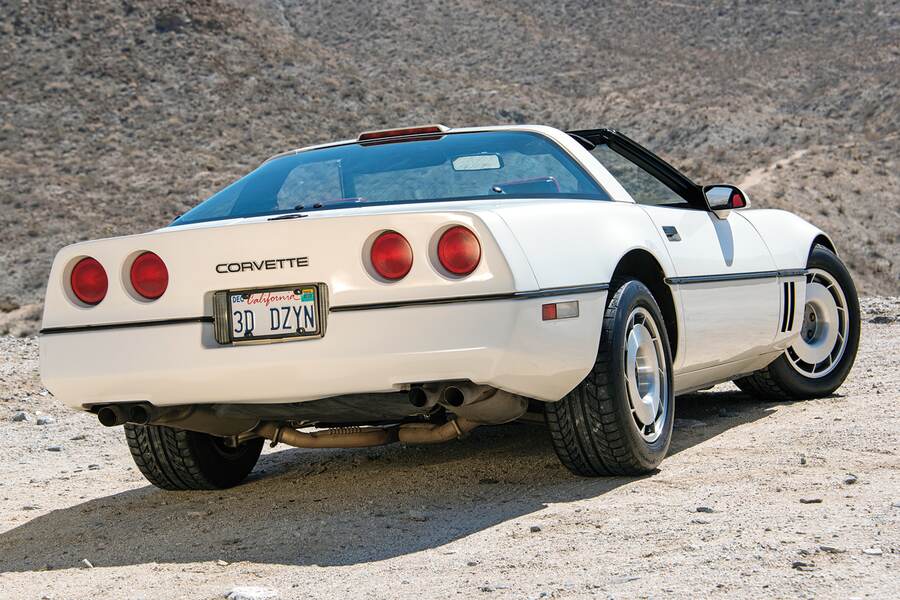 The result was a lower center of gravity, creating a Corvette with vastly improved handling capabilities. This innovative

chassis design included new suspension components as well. Up front were slender alloy arms (instead of stamped-steel A-arms) in a short/long geometry, along with a transverse fiberglass leaf spring for reduced unsprung weight.

At the rear was a five-link arrangement with upper and lower control arms, plus another fiberglass leaf spring. The new composite springs at the front and rear functioned as both coil springs and anti-sway bars, saving weight and taking up less space. While the rear end on the C2 and C3 models suffered from squatting under hard acceleration, this trait was eliminated by the new C4 setup.

Overall, the C4’s suspension not only greatly enhanced the handling of the factory Corvette, but it became a favored choice among street-rod and custom-car builders as well. Indeed, many of the C1-C3 restomods featured in CM over the years have used modified versions of the C4 underpinnings. 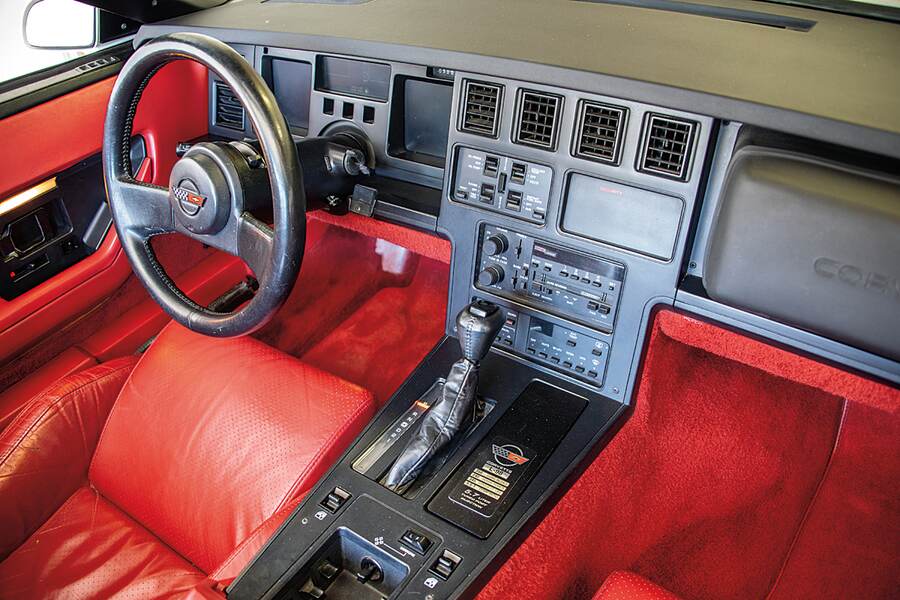 Getting back to Schacter’s professional assessment of the car’s body lines, he feels that it follows a “less is more” theme. “The C4 design represents a move to a more truly ‘modern’ design,” he says. “Its elegant simplicity, free of gimmickry and unnecessary embellishment, resulted in a car that doesn’t scream, ‘Look at me!’ But one is compelled to do just that precisely due to the aforementioned characteristics.

“The delight is in the details,” he continues. “The still exaggerated, long hood suggests more-than-ample power housed beneath.” (In this case, the stock Tuned Port Injected L98 delivers 240 hp and a burly 345 lb-ft of torque.)

Schacter claims that he doesn’t hammer the car, since at the age of 82 he’s left his early hot-rod and motorcycle days behind. Still, after our vigorous drive in the winding foothills overlooking Palm Desert, it’s clear no one would ever accuse him of soft-shoeing the throttle pedal.

While the C4 isn’t Schacter’s daily driver, he makes sure it never sits still for more than two weeks at a time. He relishes exercising it very early every other Sunday morning, for a run starting on neighborhood streets to allow a warm-up, then onto a nearby desert highway where traffic is sparse. This allows him to punch the car up to nearly triple-digit speeds. 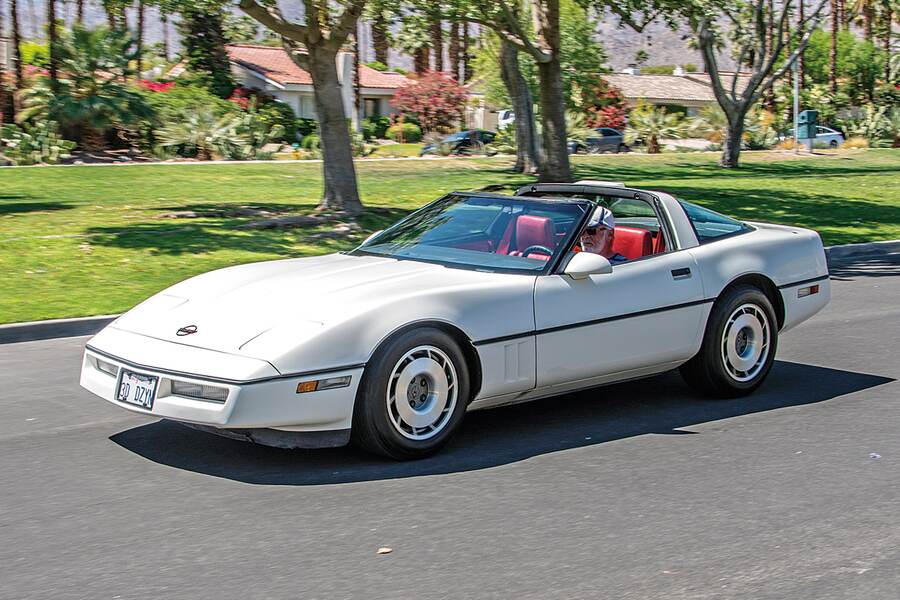 Even with a stock engine, this C4 has good acceleration, though the chassis is clearly capable of handling much more power. Cornering is flat and sure, with no sway or pitching. (Schacter calls it “gravity defying.”) The BFG g-Force Sport tires, measuring 255/50ZR16 at each corner, grip the hot asphalt of Palm Desert like a limpet, thanks in part to the aftermarket Monroe shocks, installed in place of the original AC Delco units by the previous owner. The Monroes are claimed to lessen ride harshness, a common complaint about the C4 models—particularly the early ones—due to the stiff, track-tuned suspension.

Continuing with his aesthetic commentary, Schacter notes, “The two subtle bulges on the hood are an example of an understated, but very welcome, detail. The front end, again, is just so simple. [There’s] no effort to make a ‘statement’ out of it. Its simplicity is the statement.

“The two—not three, four, or five—gill slots aft of the front wheels are an excellent example of not trying to overdo a gimmick. They’re just a nice, welcome detail.”

In addition, Schacter points to the parting line running the full periphery of the car, dividing the panels into upper and lower halves. This feature simplified construction and did away with the bonding seams sometimes visible on previous models. A special rubber molding sits snugly into the demarcation line. “The black belt line, especially on a white car, unifies the whole body. This is executed with pure genius.” 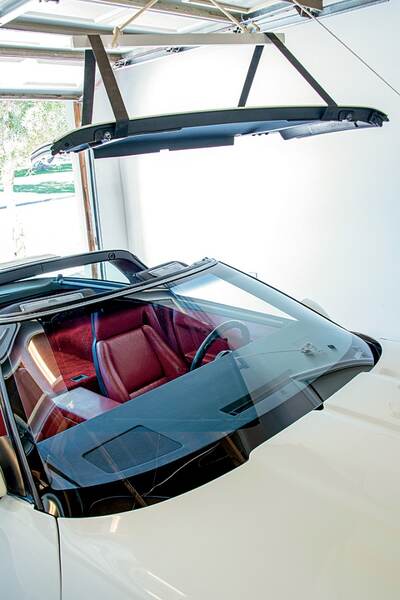 Schacter, who drives the car regularly, devised an in-garage hoist to ease the chore of removing and installing the Targa roof panel.

Moreover, the strong-looking wheels on the ’87 are, yet again, an example of a very simple design with just enough detail to avoid monotony. “Notwithstanding the inability to rotate the directional wheels and tires in the normal fashion, the directionality of the spokes suggests motion and looks very cool,” Schacter says.

Finishing off his praise for the C4’s form, Schacter feels the convex back-end treatment of the early C4 is superior to the later model’s convex configuration. The latter was “An example of change for change’s sake—never a good idea,” he observes. “The early design looks lighter and therefore faster.” And he touts the classically round, ideally sized taillights on the early C4 as “perfect.”

Altogether, it’s no surprise that his favorite moment of the day is when he opens the door from his house to the garage and sees this automotive work of art parked there. “The thrill never ceases,” he says. “I epoxied the garage floor so it would have a ‘showroom’ look. Four double-tube fluorescent light fixtures flood the garage with bright, showroom-like light.” He also rigged a clever device from the ceiling to raise and lower the Targa roof panel.

While the car was in near-perfect condition when he bought it, Schacter is fastidious in its upkeep, going so far as to have California Custom Upholstery re-dye the driver’s seat. He also replaced a headlight and a sagging headliner, along with the oil-pressure sending unit and driver-side power-window belt. While some C4 owners gripe about electronic glitches with the digital dash, that hasn’t been an issue with Schacter’s ’87.

“I’m continually amused by reading all the problems owners are having with [other makes of cars], especially with the newer models,” he says. “They’re hardly cars anymore, more like computers with wheels and windshield wipers.”

All told, Schacter sums up the early C4’s design elements as “extraordinarily ordinary.” Yet even without embellishments, Corvettes like this one remain highly satisfying to drive and behold, even today. A perfectly preserved time capsule, this ’87 coupe serves as a quintessential expression of its era. m 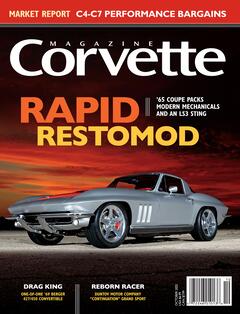 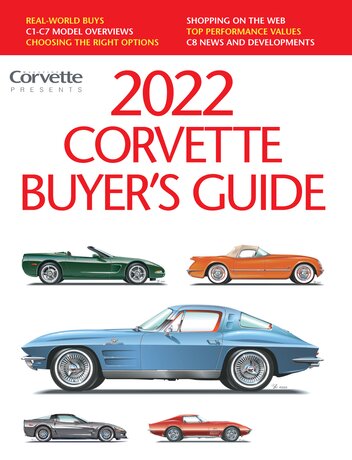