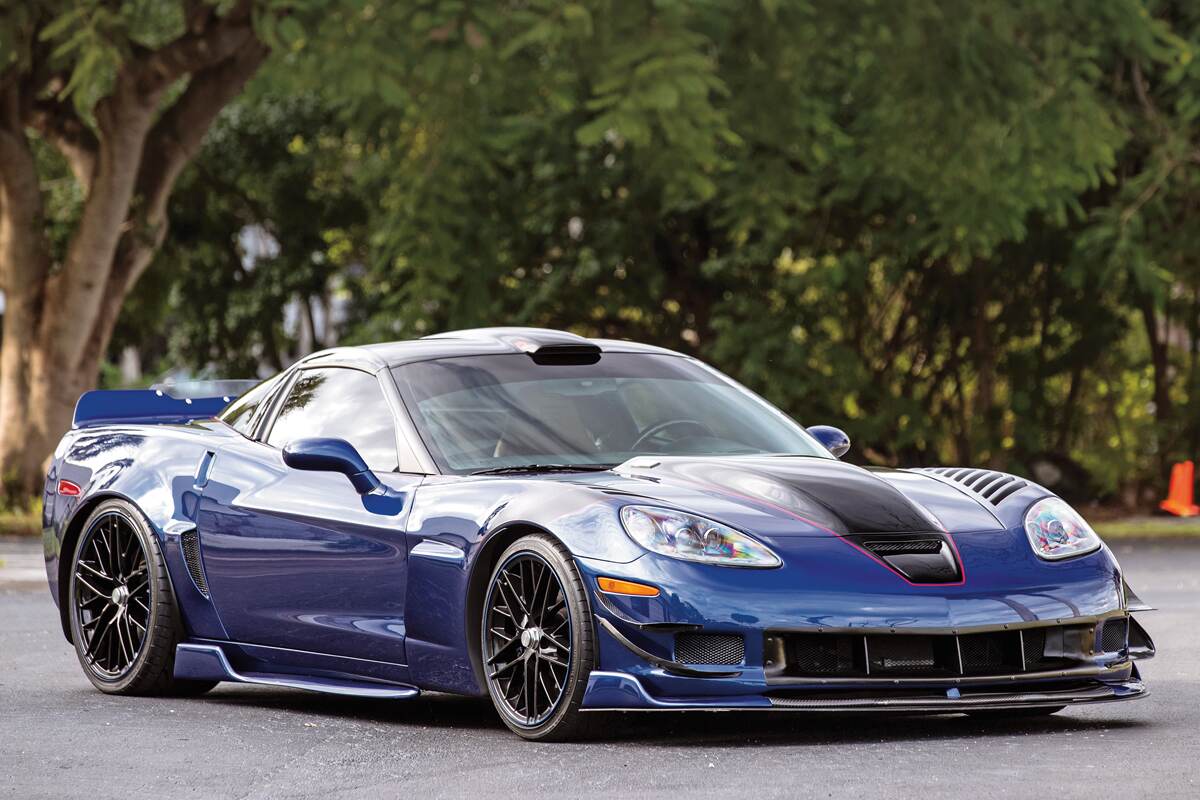 Photos by courtesy the author

When Chevrolet’s sixth-generation Corvette was unveiled in January 2004, many enthusiasts were decidedly underwhelmed. The car’s appearance and specifications were suspiciously similar to those of the 1997-04 model, leading some to label the new car a “C5.5.” Having perhaps anticipated the criticism, those responsible for the C6 were quick to point out that 85 percent of its parts were new, and would not interchange with the same hardware on a C5.

For some, the similarities between the two cars were of no consequence because the C6 was at least somewhat improved in virtually every measure. It was smaller, lighter, more agile, and more powerful than its predecessor. It also offered the highest fuel economy and lowest exhaust emissions of any Corvette made up to that point, while at the same time laying claim to the title of the quickest and fastest, sprinting from zero to 60 mph in 4.3 seconds and reaching 180 mph.

But while the C6 was an all-around better car by any objective measure, for many the new Corvette still left plenty of room for improvement, and that’s what led to the creation of George Haddad’s one-of-a-kind ride. Haddad owns and operates Fabulous Restorations in Fort Lauderdale, Florida, and it was a client project that provided the basis for the car.

“Herbert Paperman was a fantastic guy and a great friend who wintered in Florida, and he was bored,” recalls Haddad. “He had a C6 that was in Montreal, where he lived the rest of the year, so I suggested that he send it to the shop and we’d do something special with it.” 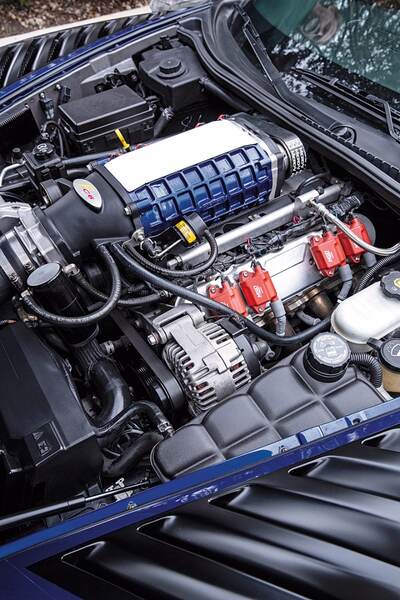 Drawing on elements of a prior C6 build, Haddad improved upon what he’d done previously, strengthening areas like the vents on top of the fenders and adding a few more modifications, including an Edelbrock supercharger. When the car was finished, Paperman was so impressed he sent another C6 to Fabulous Restorations. Then, after the second car was completed, he sent a third C6 to Haddad. However, shortly after that build began, he lost interest and ended up trading the car, and ’05 model, to Haddad in exchange for his stunning ’80 Corvette.

“All of a sudden I had a C6 project,” recounts Haddad, “and I debated whether to finish the car and sell it, or keep it. At that point I had designed and built five modified C6s, so I knew a lot about what worked and what didn’t. I decided to build the car for myself, exactly the way I wanted it.”

For propulsion Haddad installed a Magnuson supercharger on the original LS2 engine. Though there are kits available that locate the blower low enough to fit under the stock C6 hood (including the Edelbrock he used previously), Haddad chose the top-mount Magnuson for his car because of its traditional “hot rod” look. 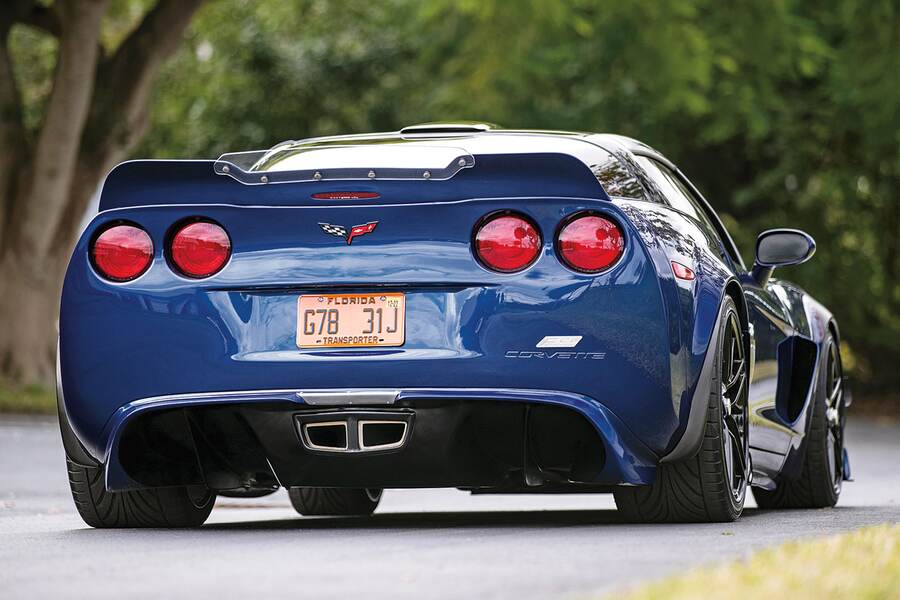 To accommodate the big blower, Haddad bought a fiberglass ACI high-rise hood and modified it by closing its inlet scoop and reshaping its center bulge. As part of the comprehensive air-management plan that drove all of the car’s body modifications, Haddad designed the hood to direct the air that passes over it up the windshield and into a roof-mounted scoop.

“The inlet of the roof scoop is larger than its outlet,” explains Haddad, “and internally it has two runners shaped like a ‘V.’ The shape and configuration create a venturi effect, increasing the pressure of the air when it exits the scoop. This makes the air hug the rear window and rear deck before it hits the rear spoiler.

“We taped small pieces of string to the rear window and then experimented with blowing air at different pressures through the scoop,” he continues. “The movement of the string showed us that low-pressure air dissipated while high-pressure air hugged the window. So we designed the roof scoop to deliver high-pressure air, helping generate downforce and make the car more stable at high speed.”

The car’s stock front fascia gave way to a fiberglass Z06-style unit, but like the hood it was modified considerably: An inlet on top feeds air into the engine compartment; the large grille opening directs air through the radiator; and openings on each end, where the driving lights normally reside, channel air into the wheel wells. 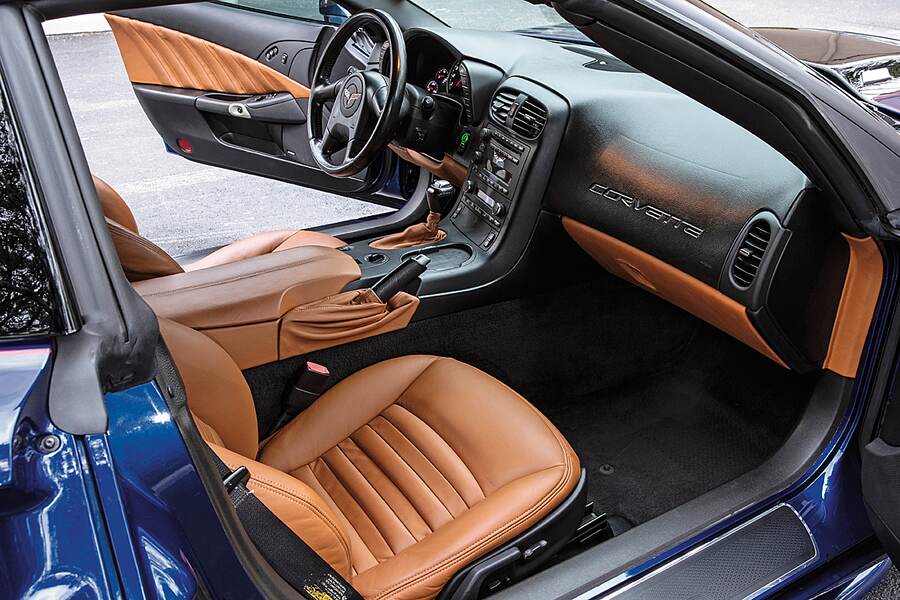 The front end is finished off with a custom-made splitter and dive planes inspired by Callaway’s GT3 racecars. Haddad made the splitter from fiberglass but mounted a quarter-inch thick aluminum plate to its underside to better withstand the occasional scrape that comes with driving this lowered C6 on the street.

In keeping with the overall exterior design theme—a melding of C6 Z06 and GT3 racer, according to Haddad—Z06-style front fenders and rear quarters replaced the stock pieces. As with the hood and front bumper cover, these were made with fiberglass and then modified to increase aero performance and create a more aggressive look.

The fenders each got Z06-type side scoops that are about 3 inches taller, with an opening that’s 2.5 inches wider. The fenders were further modified with 11 louvers on their top surfaces.

“I designed [those],” Haddad explains, “then made a template with card stock and laid that on top of the fenders to transfer the shapes. Each opening was cut out by hand, and then a friend of mine made molds for a one-piece structure that bonded to the underside of each fender. [That] gave shape to the openings by creating ‘lips’ for each louver. I then finished each seam of each louver to give them a paint surface that’s every bit as good as the rest of the car’s exterior.” 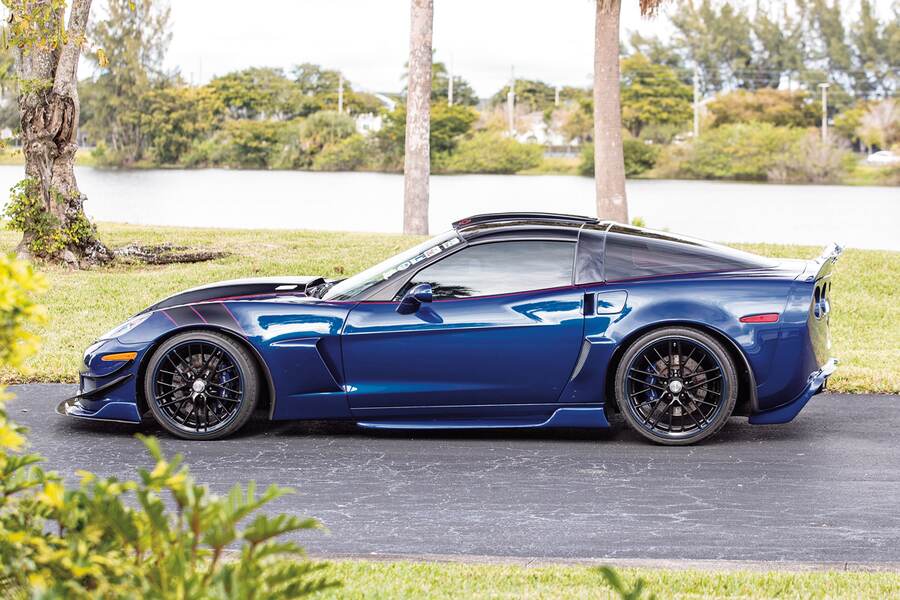 In another nod to aerodynamics, the inner wheel housings were then modified to work with the louvers to relieve the air pressure that normally builds up in the wheel wells. As with all of the air inlets on the car, metal screens prevent larger bits of debris from getting through.

To balance the look of the front fender scoops, the rear quarter panels were also reconfigured with larger air intakes. As with a Z06, these channel cooling air to the rear brakes. The enlarged scoops on the fenders and quarters were then visually balanced with custom-made side skirts. These terminate with a vertical strake that mirrors strakes at each outer end of the front splitter, further tying the modified body’s elements together.

The rear of the car retains its original bumper cover, but the stock look was transformed with a diffuser that Haddad fabricated using an existing diffuser as his starting point. “The diffuser I had was designed and made by someone else,” he says, “but it didn’t look the way I wanted it to and it was weak because of the plastic material it was made from. I made a number of changes to the design and then produced a mold that enabled me to make the finished part from fiberglass.”

One of the design changes Haddad made to the old diffuser was substituting twin exhaust outlets for its original four openings. The new outlets are identical to those found on the Cadillac CTS-V, and they mate to a custom stainless-steel exhaust system fabricated at Fabulous Restorations. “We started with a Borla system and gutted the muffler to give a more aggressive sound,” says Haddad. “We left the cats in place so they temper the sound when idling or cruising, but when you put your foot into the throttle, the sound is nasty!” 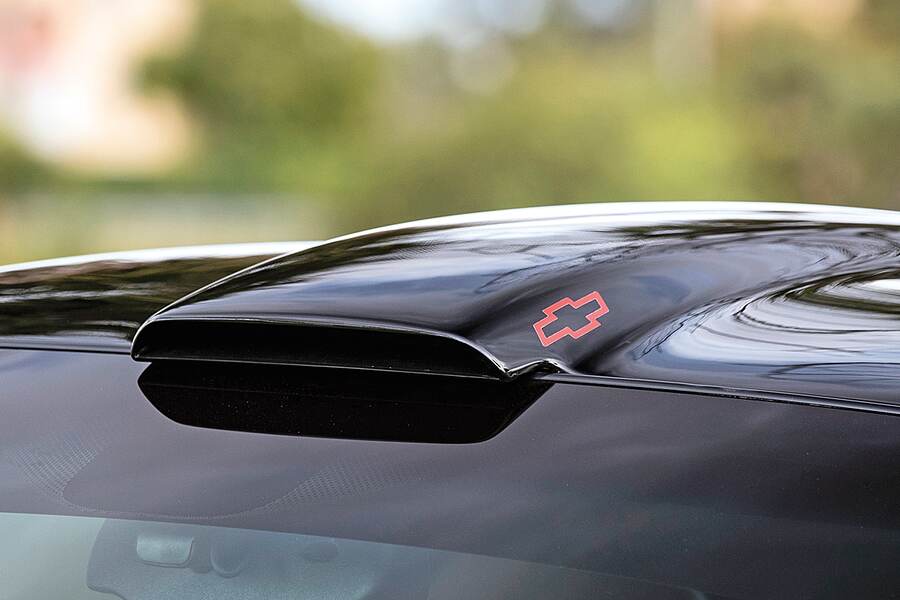 The rear of the car is further distinguished by a GT3-inspired spoiler. Because the extra-tall wing was at first impeding rearward vision from the driver’s seat, Haddad cut out the center and then replaced it with a piece of clear Lexan. This alteration now provides an unobstructed view without compromising the spoiler’s aerodynamic performance.

After he and his crew at Fabulous Restorations spent countless hours perfecting the body panel surfaces and gaps, Haddad painted the car in the rich shade of blue Chevy used for the 2004 Corvette Commemorative Edition, albeit modified with a little bit more metallic content. He then finished off the exterior with 9×19-inch front and 12×20-inch rear wheels from Eckler’s Corvette, and mounted 275/30ZR19 and 345/25ZR20 Toyo Proxes T1 R tires. Custom-made center caps, machined from billet aluminum, simulate the look of center-nut wheels.

Haddad was generally satisfied with the C6’s interior layout, but he did want to upgrade its look. To that end, he had new seat covers made using Connolly leather. He also had door-panel inserts made from the same material, and like the seats, they have alternating flat and rounded pleats inspired by the upholstery in a Maserati Merak. The entire lower dash, headliner, and glove-box door also got the leather treatment, with French seams sewn into the headliner and door covering. Haddad completed the cabin transformation by painting the gray-plastic parts on the console and dash with a slightly textured black coating.

“I really love the interior,” Haddad reflects. “The original C6 interior had a cheap look in places, and it was not difficult to improve it. The C7 interior was much nicer, and that served as an inspiration for me, in terms of the two-tone treatment and the more complex surface textures we added.”

All told, the design and build process took about one year, reaching completion in 2016. Since then Haddad has made numerous changes, refining his vision for what the car should look like and further improving its performance. And in keeping with his plan from the start, he has driven it about 25,000 miles. That includes a day on track at Palm Beach International Raceway, where all of the aerodynamic enhancements he made were validated.

“It’s incredibly stable, both on the track and on the highway,” he reports. “At high speeds you can actually see the car hunker down from the downforce the body generates, and even on track in Florida’s summer heat, the brakes, transmission, engine, and everything else stays surprisingly cool. It’s beautiful and performs as good as it looks. It really is a fabulous car!” 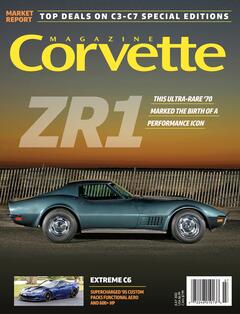