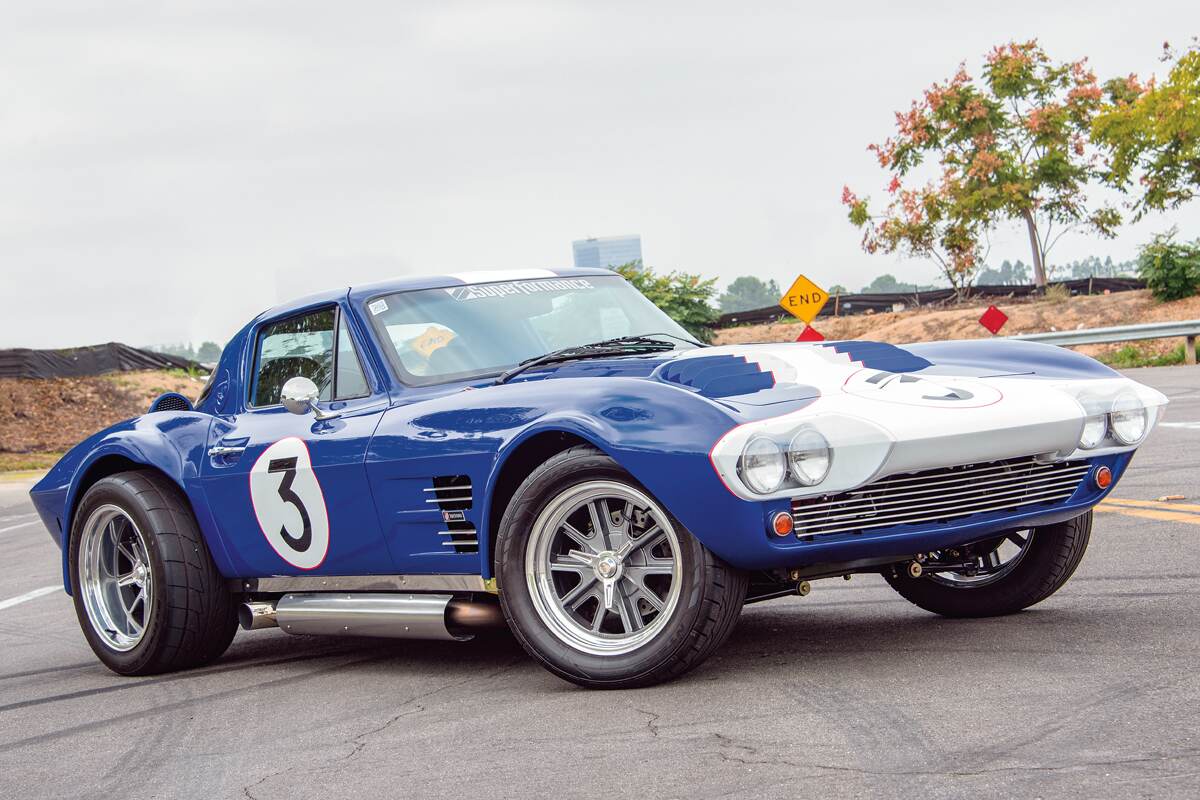 “The Lightweight” is legendary. Zora Duntov’s 1963 Grand Sport racer, which skinned Shelby’s snakes, is now worth untold millions. Driving one on the street, however, would be a daunting challenge for mere mortals. Aside from the fact that it would likely never happen due to its extraordinary value, the car was a handful—overpowered and unpredictable. A hot mess, to put it bluntly, after we spent some time on the track with one a few years ago.

On the other hand, latter-day reproductions such as the GM-licensed Superformance version have groomed the car’s unruly manners, turning it into a powerful, yet refined, touring car. So it’s not exactly a feathery tribute to the Lightweight, but that’s the penalty for adding creature comforts such as an array of power accessories and air conditioning. (These add up to about a half-ton more in weight compared with the barebones original.) And though it’s not a wild racer like the original, the Superformance GS is certainly a better car overall, benefiting from advances in technology as well.

To be fair, in creating a GM-licensed reproduction, Superformance did go to great lengths to copy the classic, following the blueprints for the tube chassis to be as authentic as possible while upgrading key areas. The repro GS features fully independent suspension, with transverse leaf springs in the rear and coil-overs in the front, along with a modern steering system for a better turning radius. Bilstein shocks and top-line Wilwood disc brakes enhance the handling and stopping, too. The hand-built fiberglass body has a thicker laminate for better durability, and it wears a custom three-stage paint scheme. 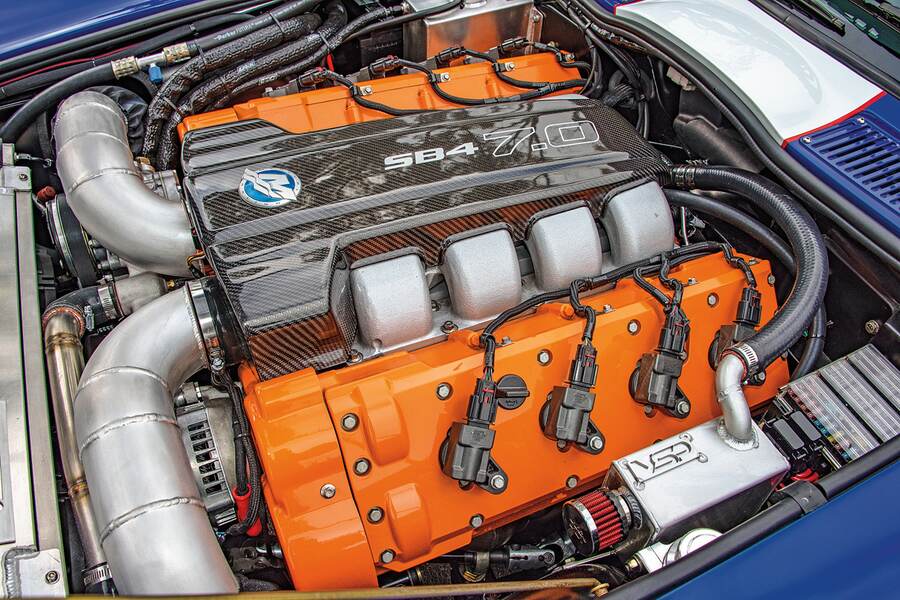 While many Superformance GSs are powered by a 550-horsepower Chevy Performance LS376 mated to a Tremec T56 six-speed transmission (and other engines too; see sidebar) that’s not the case with Rich Shimer’s substantially upgraded version, which features a stump-yanking SB4 7.0-liter crate engine from Mercury Marine. Mercury, of course, has a history with Corvettes, having supplied the 5.7-liter LT5 engine for the C4 ZR-1s. The SB4—the acronym stands for “Small Block Four-Valve”—is a whole ‘nuther creature, though.

It’s a chest-thumping gorilla of an engine, pounding out 750 horses and 559 lb-ft of torque at a screaming 8,000 rpm. Just the thing to overcompensate for a reproduction’s increase in poundage. (And a marked contrast to the 377-ci engine in the original, which boasted a power range from 485 to 550 hp.)

When the engine debuted back in 2016, Mercury stated that the SB4 7.0 was developed from a 428-ci LS7 block, albeit one heavily optimized through the use of 3D simulations and finite element analysis (FEA). The cylinder heads are downsized versions of the ones topping the firm’s mighty 9.0-liter QC4 twin-turbo engines, which are capable of producing a whopping 1,750 hp. 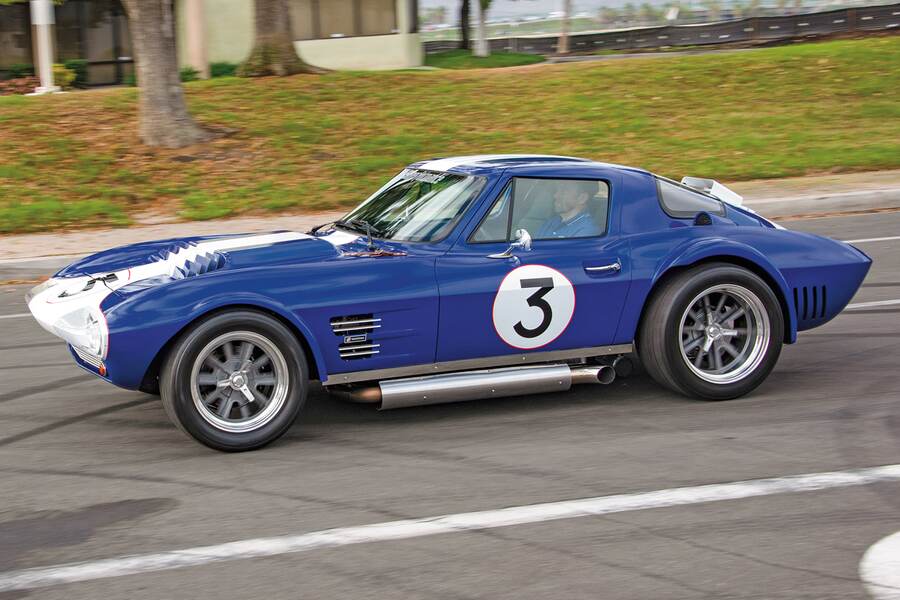 By dispensing with pushrods and adding two valves to each cylinder, the engineers at Mercury were able to flow more air through the LS7 block, besting its rated power of 505 hp by a whopping 245 horses. Better still, the new DOHC heads opened up an extra 1,000 revs at the top end.

“It’s a giant air pump,” Shimer says. “By optimizing airflow into the cylinders, it’s the holy grail of LS engines.” Yet he feels the engine is still very drivable around town, with a highly linear power band.

Fully dressed, the SB4 tips the scales at more than 500 pounds. It’s bigger, too—three inches longer and two inches wider than the LS7, but about the same height as its GM counterpart. That’s good news for car builders who don’t want to buy a taller hood. Yet this thoroughly revised C6 Z06 mill is by no means a “plug and play” deal. 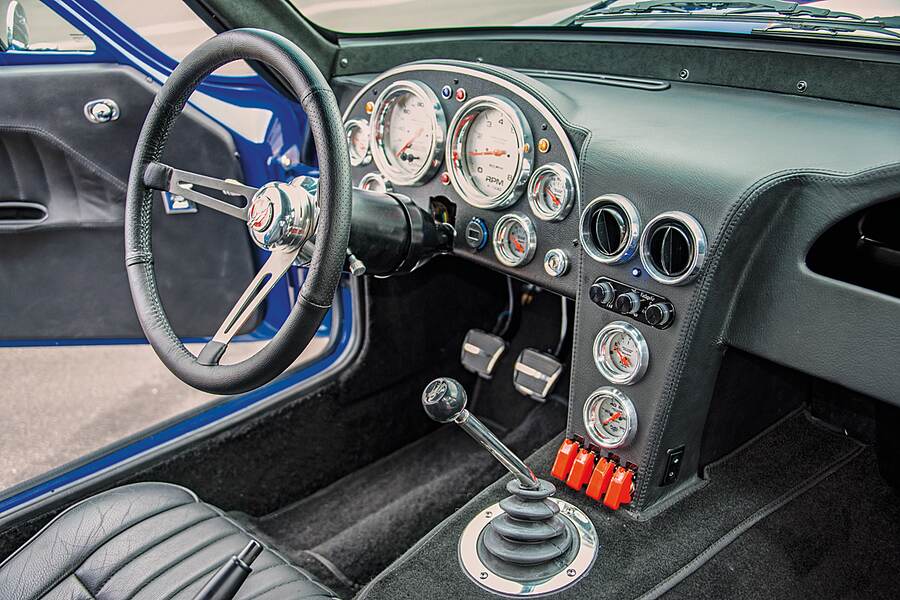 Once the engine arrived from The Roadster Shop for installation in the Superformance finished chassis, Vlado Jancev and his crew at V’s Performance needed to do lots of modifying and fabricating to make it work. For example, they had to maneuver the bulkier block in and out of the car’s engine bay four or five times to ensure a precise fitment.

What prompted Shimer to go to such lengths? Superformance’s Rich MacDonald (son of Corvette and Cobra racing champion Dave MacDonald), recalls how it came about. “[Shimer] had originally contacted me about building a Shelby Daytona Coupe, [as he] appreciated the history my father had with the Daytona,” he says. “However, the more he learned about our GM-licensed Grand Sport, the more he loved it.”

The tribute Corvette was a fitting choice, consider that Shimer’s father, Butch, once owned a special-order, big-block ’66 Vette with a wooden steering wheel and radio delete. Rich fondly recalls the car from his pre-teen years, noting, “That first experience, that shape, sticks with you.” (While Butch knew of his son’s custom-engine replica project, sadly he passed away a few months before the car’s completion.) 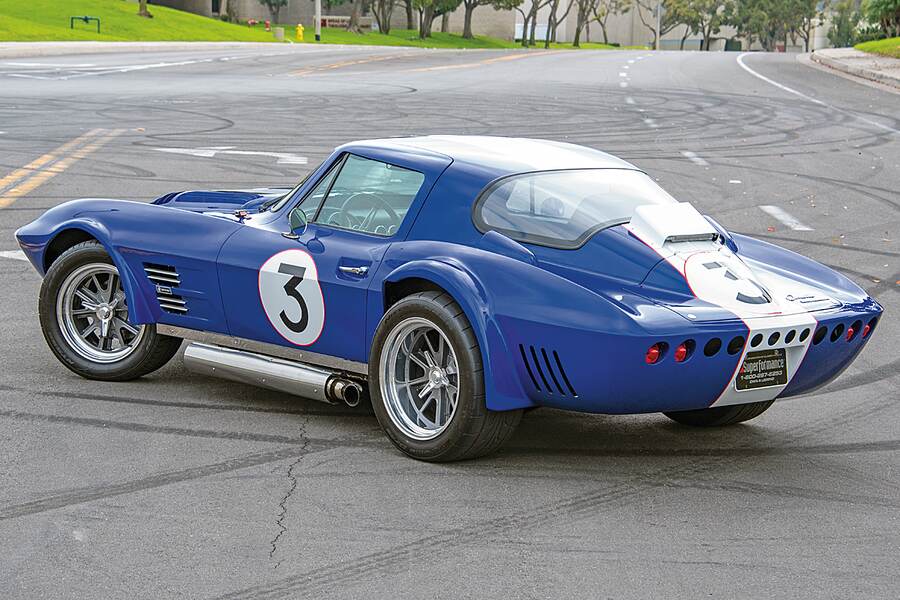 Shimer chose to have his Grand Sport finished as GS chassis #003 looked when the legendary A.J. Foyt ran it at the 1964 12 Hours of Sebring. (Foyt actually raced the car with No. 2 in the roundels, but Shimer wanted No. 3 instead.) He also opted for the “big” wheel package, with 17s up front and 18s on the rear, giving it a more modern presence. This street rod-style-stance works exceedingly well on the Superformance GS, but purists can also order the car with 15-inch Halibrands or magnesium rims.

The drive that I took in the car with Rich MacDonald was unforgettable. The acceleration drains the blood right out of your face. And the exhaust note is so intense, it would make any hardcore hot-rodder delirious with envy. As for handling, the repro feels far more sure-footed than the original, and the Wilwood brakes engender confident stopping as well.

All told, Rich Shimer’s Superformance GS was done to the nth degree, with no expense spared, and as such it cost a bit more than the $180,000 base price. Yet that’s a fraction of the many millions an authentic commands—if you could even get one. 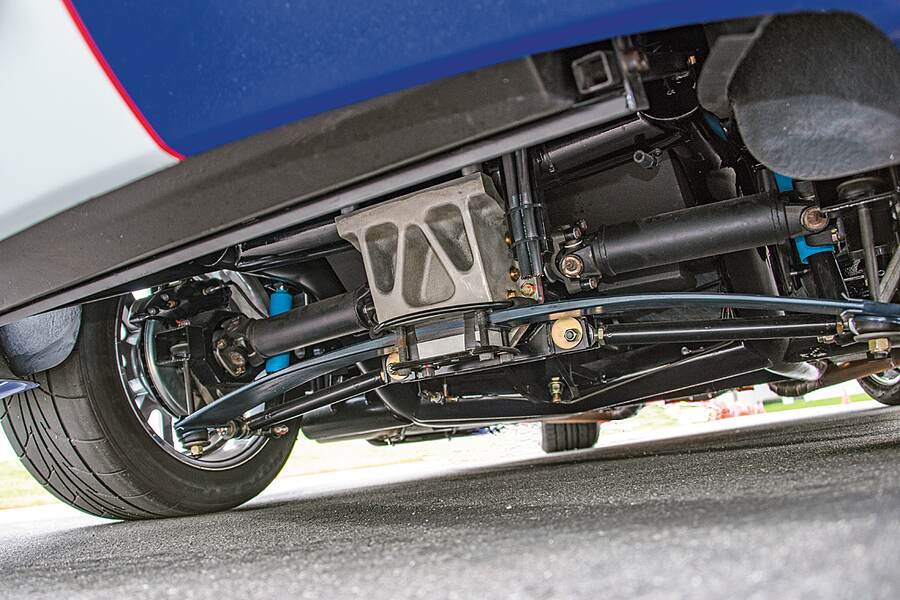 As Shimer puts it, “It’s like an original Grand Sport, but better!” 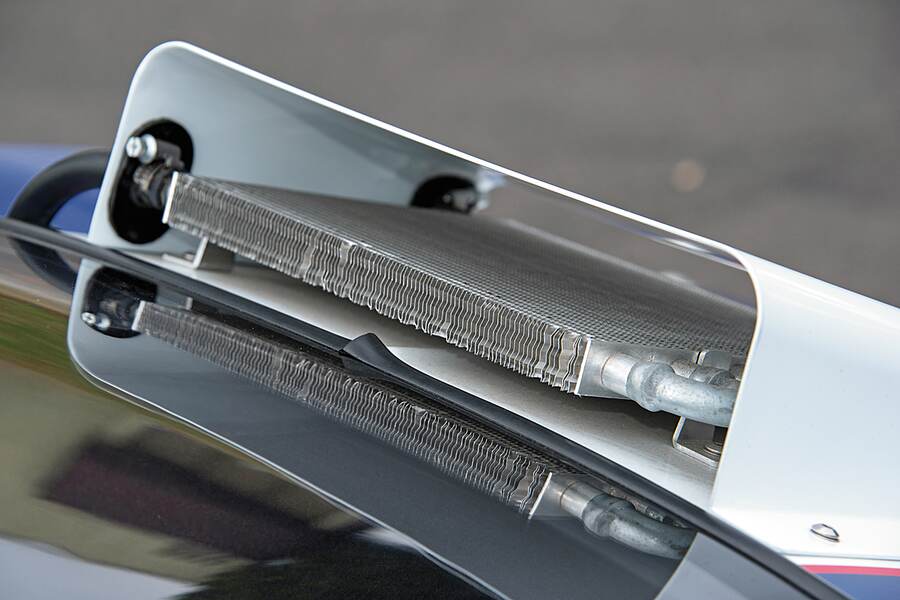 The original ’63 Grand Sport was raced with a few different engines, most notably a 377-ci aluminum small-block with four Weber side-draft carburetors and a cross-ram intake, rated at 550 hp at 6,400 rpm. The car’s ever-changing series of powerplants culminated with the vaunted 427 L88 big-block, at Sebring in 1966. So there is a valid historical precedent to offering a variety of mills in the modern-day Superformance reproduction, as Rich MacDonald points out. “We’ve built it to house anything from an old-school 377 stroker to the modern LS or LT motors—even a [Ford] Coyote,” he notes. “The most common motor has been an LS3 or LT4.”
By way of comparison, we came across the latter setup in a Superformance GS owned by Rob Funari, who relishes an extensive collection of custom exotics (including a Corvette-powered Maserati that we featured in a previous issue). Both Shimer’s SB4 and Funari’s LT4 were installed by Vlado Jancev and his crew at V’s Performance. Jancev has extensive experience with “turnkey-minus” projects—that is, replicas that come as complete rollers except for the drivetrain—but these two cars required much more time and fabrication work.
The LT4 took about a month or so to install, as its modern electronics and supercharger were more involved than a traditional, naturally aspirated setup. As for the SB4, that took twice as long as the LT4, and for almost twice the money. Even so, Jancev says he under-bid the project, as he wanted to take on the challenge.
What sort of obstacles did he encounter with the SB4? Due to the engine’s slightly larger dimensions, he needed to modify the standard LS mounts with mild-steel supports and Energy Suspension polyurethane mounts. He also had to move the radiator forward, using custom-welded tanks and ducting, along with Spal puller fans. The aluminum intake tubing is also custom TIG-welded.
The Mercury accessory drives required some modification, as did the mechanical steering pump, replaced with a Bosch electronic unit that’s driven by battery power, not the engine. Jancev says a pressure sensor kicks this system into bypass mode at highway speeds to provide better road feel. A Detroit Speed rack-and-pinion setup, meanwhile, directs the steering.
Other mods required on the SB4 included stainless-steel headers and side pipes, which Jancev admits were “big hurdles, [and] very tight to fit.” In addition, the marine motor needed different transmission mounts and a longer driveshaft and wiring harness. And the A/C system runs a smaller Vintage Air compressor. On the plus side, the Mercury engine computer ran flawlessly, with no custom programming needed. So was all this extra effort worth it?
First, let’s acknowledge that Funari’s LT4 Grand Sport is certainly quick off the line—its projected quarter-mile performance is 11.1 seconds at 136 mph—and it has a slightly lighter feel than Shimer’s car, due to somewhat reduced weight up front (though both Superformance cars weigh about a half-ton more than the original Lightweight).
On the other hand, the SB4 brings on the power in an even more dramatic manner, considering the 1,000 extra revs on the top end. The torque output is prodigious, on tap all the time, with no quick shifting needed. It feels like a boosted motor, yet without any turbo lag.
As much as Jancev praises the SB4’s power curve, he muses aloud about adding a pair of turbos, since the heads flow so well. After all, when it comes to horsepower, you can never have too much. 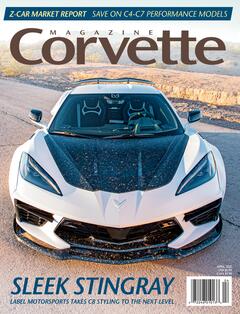