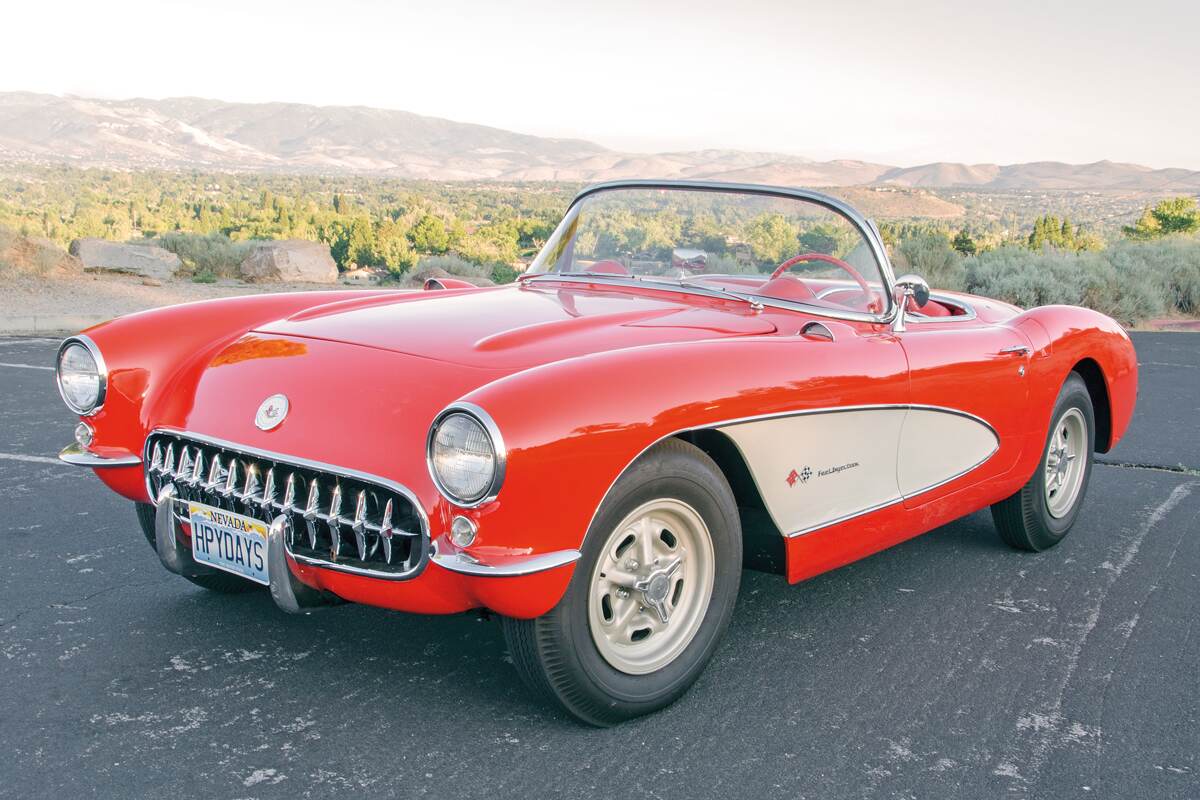 Shakespeare once employed an expression about “the undiscovered country” (Hamlet, Act 3, Scene 1). So did William Shatner, in a Star Trek movie, but the two men intended different meanings. Their basic thought, however, was that we don’t know what the future will bring. This truism was certainly the case with the 1957 Fuelie shown here, which turned out to be one of Zora Arkus-Duntov’s obscure, yet historically significant, “Field Test Fleet” cars.

Bearing the number E57S102276—2276 for short—the Corvette might have been sold through a dealership in Southern California, but the original buyer is unknown. What is known, however, is that it was once owned by Mike Pillsbury, dubbed the “Corvette Hunter” for his uncanny ability to find old Corvettes, particularly racecars. (One of his great finds was one of the 1960 Cunningham Le Mans cars, which he literally discovered in a junkyard.)

Pillsbury owned Corvette 2276 back in 1968, but subsequently sold it. The car changed hands a few times, and ensuing owners made tentative attempts to restore it, but then faltered, eventually giving up. Fortunately Rich Mason, previous owner of the legendary Chevrolet SR-2 prototype, asked Pillsbury to locate a fuel-injected car with big brakes, so he tracked down his previous Corvette. 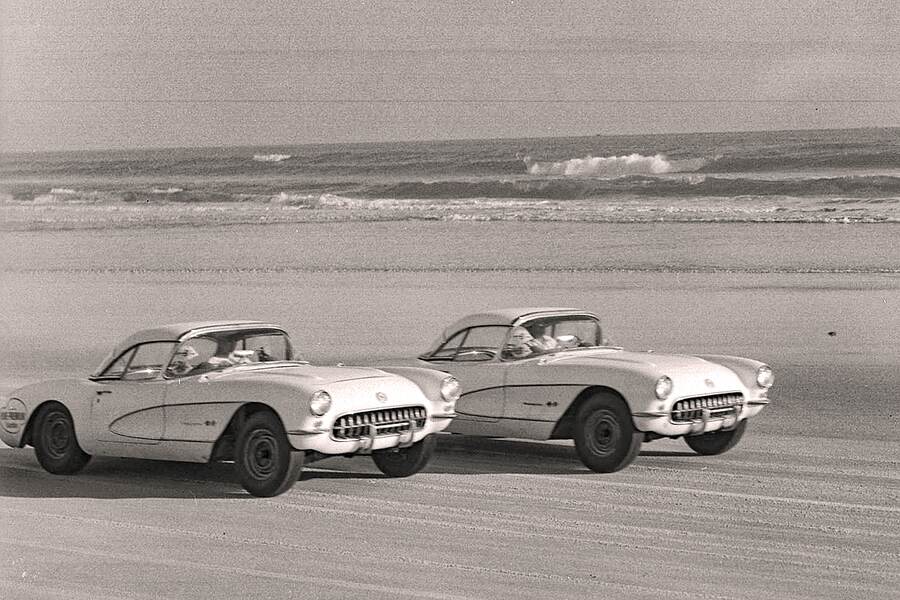 Mason already had a collection of rare Corvettes, but he had no idea how significant this particular Fuelie would turn out to be when he acquired it for just $8,000. The car was uncovered—literally—in the aptly named town of Rescue, California, where it had been socked away in a barn, with debris stacked on top of it. All of the trim, along with the grille and headlights, had been stripped off and stored in boxes, so Mason loaded it all into the bed of his pickup. Even though the chassis just needed some cleaning up, the body had been crunched at all four corners, requiring extensive repairs by Gene Smith (who also did work on Mason’s SR-2). So while this Fuelie certainly needed “rescuing,” that wasn’t really an obstacle to Mason. “The condition almost didn’t matter,” he recalls. “I knew I was going to restore it, and [I] had all the parts.”

In addition, he discovered during the restoration process that there were two repaired cutouts for a roll bar, indicating that Corvette 2276 had probably been raced. That fits with the research indicating that the cars in this particular Field Test Fleet were developed for competition, a fact that would later be borne out by additional evidence.

During the car’s restoration in Carson City, Nevada, Mason had it painted Venetian Red as a tribute to a close friend and fellow Corvette owner who had passed away. Not realizing what he had on his hands, Mason proceeded to enjoy the car by driving it around town. Eventually he decided to sell off almost all of his cars, but he hung onto the ’57 because he was so fond of it. That’s where another good friend of his, Bob Infantino, stepped into the picture. 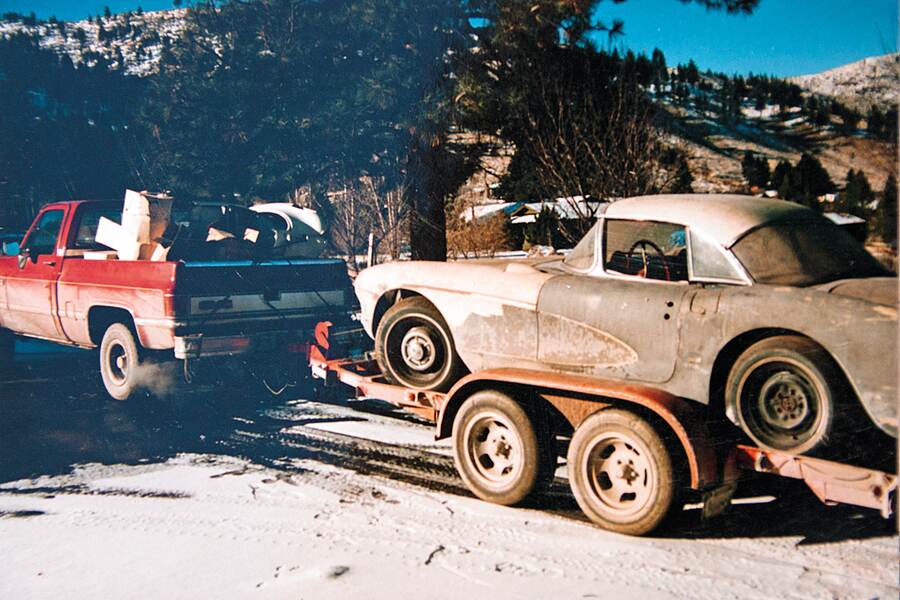 During Mason’s initial restoration of the Fuelie, Infantino would often stop by to monitor his progress. Infantino has owned 40 or so C1 Corvettes over the years, and he kept pestering Mason about selling this one to him, insisting that the car needed to be seen at shows and judged. Knowing that it would be going to a good home, Mason finally relented in 2016, letting it go for the fair-market price of a typical ’57 Fuelie.

Suspicions that the car was something very special struck both Infantino and Mason when Mason received a letter from Mike Hunt, an expert on 1956 and ’57 Corvettes. Hunt’s letter suggested that there were some special racecars produced at the St. Louis Plant in February of 1957, for the purpose of testing high-performance options such as fuel injection, heavy-duty brakes and suspension, and a four-speed transmission.

Hunt had what appeared to be unprecedented access to information relating to Corvettes assembled in St. Louis. Based on that information, he had maintained for 30 years that the factory also assembled two RPO 579C Fuelie Corvettes, in the VIN range S102000 to S102200, for conversion into racecars for Sebring. GM Engineering build orders eventually surfaced verifying this. One in particular, dated January 14, 1957, requested competition-spec brakes for the upcoming Sebring race. 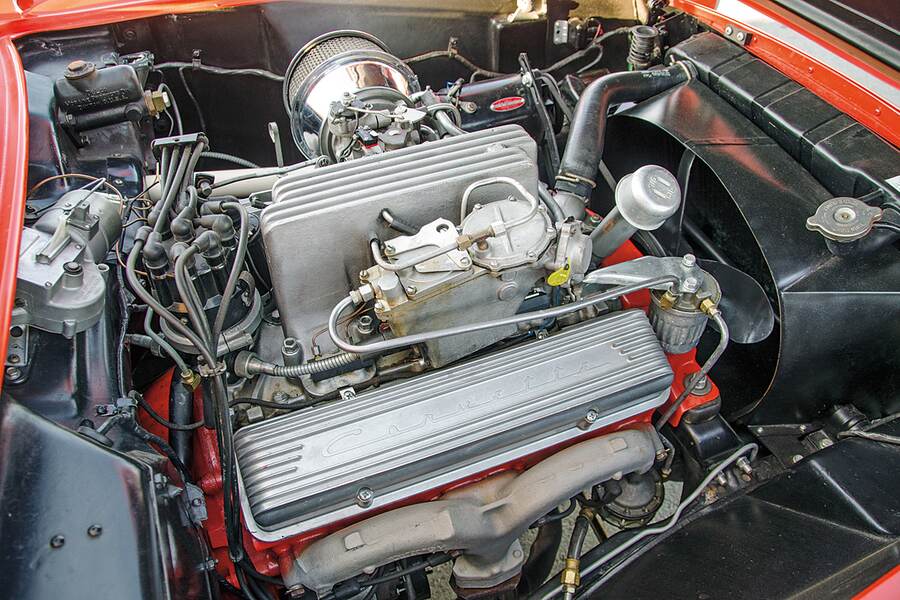 Hunt’s letter to Mason mentioned that, “…prior to the airbox [intake], there had to be some H. D. non-airbox cars. Chevrolet was competition-developing 1956s, so 1957 was just a continuation [of that program].”

The letter also stated that, “They almost definitely built some ‘special’ or ‘slightly special’ cars. Some were probably sold via normal channels; some were probably done for Chevrolet people and/or their favorite competition people, or buyers who managed to get the cars they wanted.”

Infantino and Mason knew from previous research that there were 51 ’57 Corvettes fitted with the RPO 684 Heavy-Duty Racing Suspension. There were 43 RPO 579D “airbox” cars produced from May to September of 1957, which left eight non-airbox cars built with the heavy-duty underpinnings. Mason suspected his car was one of the eight, so he contacted Hunt and Ray Mascarella, who owned a similar ’57 (serial number E57S1002281, built on the same day as Mason’s), to obtain verification of its special provenance. 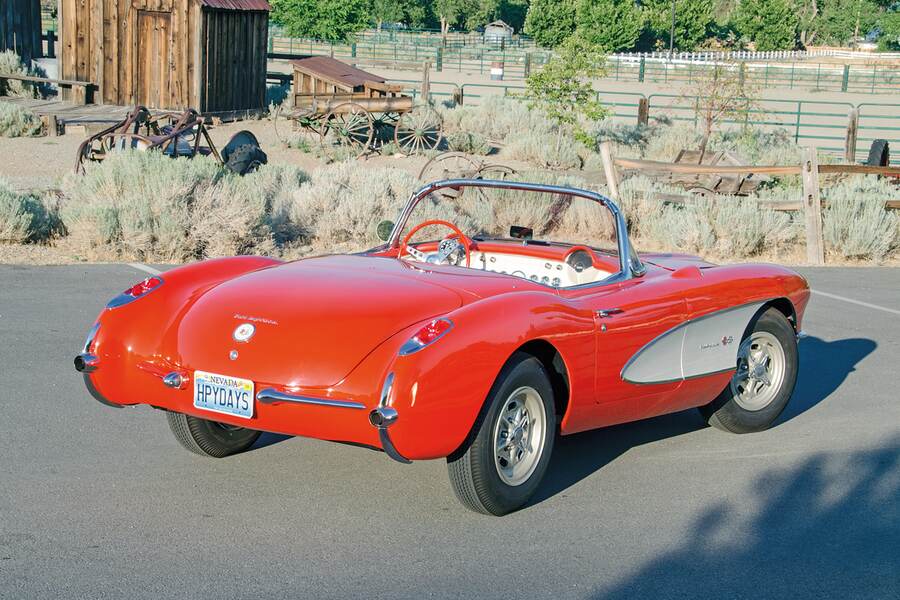 With a newfound appreciation of his car’s significant history, Infantino invested an additional $25,000 in rare restoration parts, to put the Corvette back in its true, original configuration. Since Mason had installed a three-speed transmission for driving on the street, Infantino recovered an original numbers-matching, four-speed drivetrain that was in need of a rebuild.

“The transmission was a mess…the main shaft was toast,” he notes. “I had trouble finding parts, [as they’re] like hen’s teeth.” The reverse idler gear alone cost him $350 on eBay, and two little bolts for a fuel-injection filter bracket, stamped with “EB,” cost $125 each. He also went to great lengths to verify the car’s historicity.

“This car went from race condition to restored condition without ever having been presented to the public,” Infantino notes. “I felt so certain…that this car was truly special that I took a trip to Detroit, to the GM Heritage Museum.” 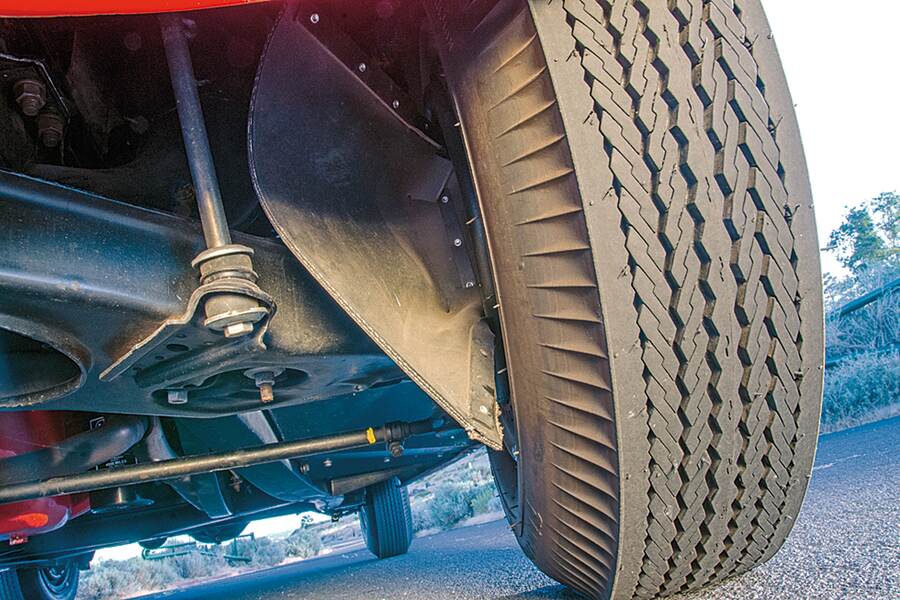 It was here that Cristo Daniti, the GM Museum Lead Archivist, presented Infantino with all the documents—more than 300 in all—that he had from the 1957 Chevrolet Performance Engineering Build Order program. From these build orders there were instructions to send two 1957 Corvettes to Daytona Beach for Daytona Speed Week. Infantino believes his car may have been one of these, though he has no hard proof as of this writing.

Ken Kayser, a respected researcher and author with access to Duntov’s personal engineering files, has verified that this small pilot run of competition-prepped ’57 Corvettes was indeed built in St. Louis. Kayser’s book Volume III-The History of Duntov’s “Ramjet” Fuel Injection states, “This Field Test Fleet was assembled prior to availability of Corvette bodies with the rocker panel ducting to the rear wheels. Most of Duntov’s Field Test Corvettes were originally painted Polo White with red interior.”

During this time period, GM’s engineering department was busy pushing build orders at a rapid clip. In 1956 Duntov and his crew had readied the Corvette Super Sport for debut at the New York Auto Show in December. And Chevrolet’s first purpose-built racecar was slated to run at Sebring in 1957. Many of the parts designed to go on the SS needed to be tested by trusted racers, who could provide expert return feedback on their on-track performance. In order to do so, not only did GM need to design, manufacture, and procure the parts necessary, they needed to fit them to Field Test Fleet Corvettes. 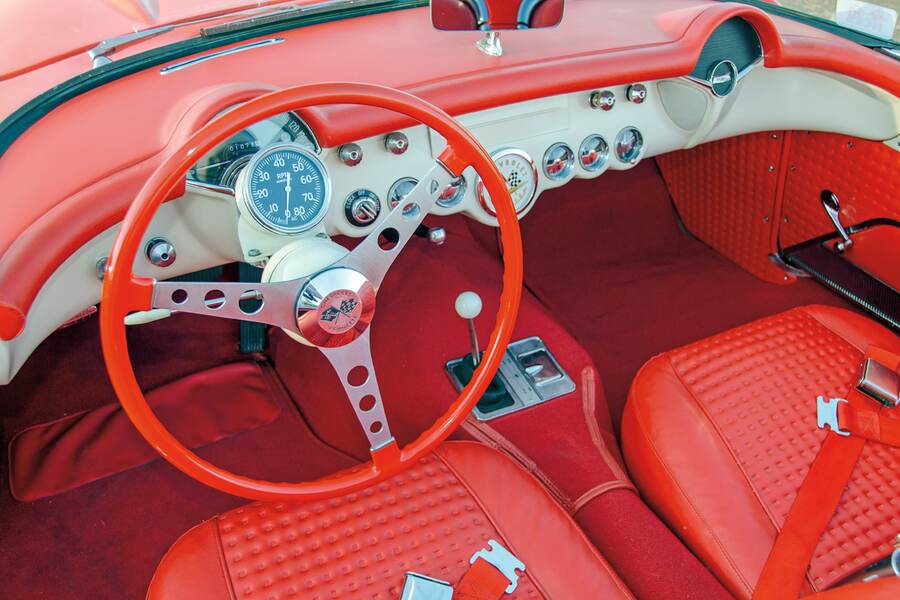 Tellingly, Infantino’s Corvette includes rear leaf springs with engineering part numbers that were not available on GM’s standard parts list at the time, yet another fact that helps to establish its pre-airbox bona fides.

Corvette 2276 may still be an “undiscovered country” in some respects, but its status as one of a very small number of ’57 Field Test Fleet cars is beyond doubt. Knowing this, Infantino drives the car only occasionally, the better to preserve this rare historical gem. And he still continues in his efforts to research and document its precise origins. m 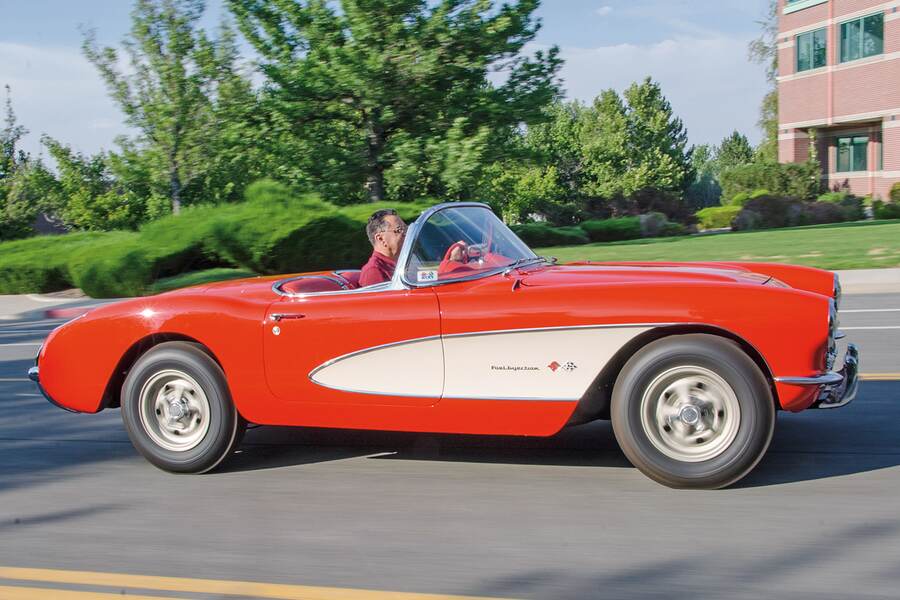 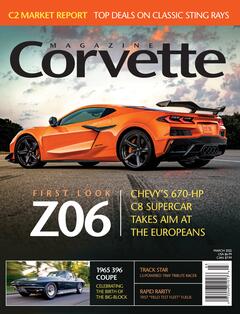