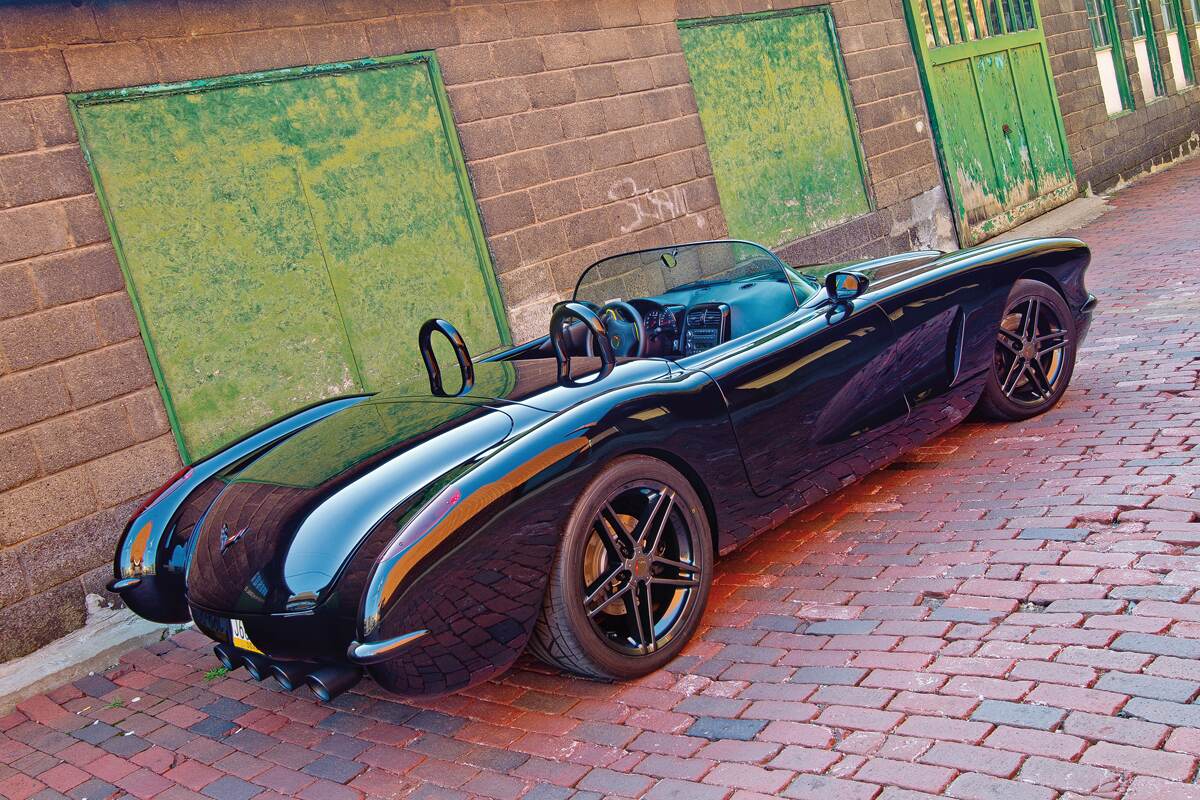 This incredible 1960 Corvette was once saved from a fate worse than death. Specifically, its previous owner was going to turn it into a couch if he couldn’t sell it on eBay. Fortunately fate intervened, and the ad was spotted by Pernell Spohn, owner of a paint-and-body shop in Butler, Pennsylvania.

Spohn, happily, is someone who knows Corvettes well—he’s also the longtime owner of a ’69 427/435 model—and he allowed his imagination free rein in rebuilding the car. After a solid year of patient labor and a considerable cash investment, the tattered-but-original 1960 body that previously called Ashtabula, Ohio, home has a new lease on life. Along with a radically altered C1 body shell, the originally red-on-white roadster now features C6 underpinnings and a thoroughly modern drivetrain. In short, it’s the perfect example of a modern restomod.

Perhaps unsurprisingly, this comprehensively remade ’60 does not represent the first time Spohn has fitted C6 mechanicals to a different body. His first such project was a ’65 Pontiac GTO convertible a decade ago, and the second involved a ’68 Camaro. Since then he says he’s done at least 10 such conversions on various midsize GM coupes and drop-tops. 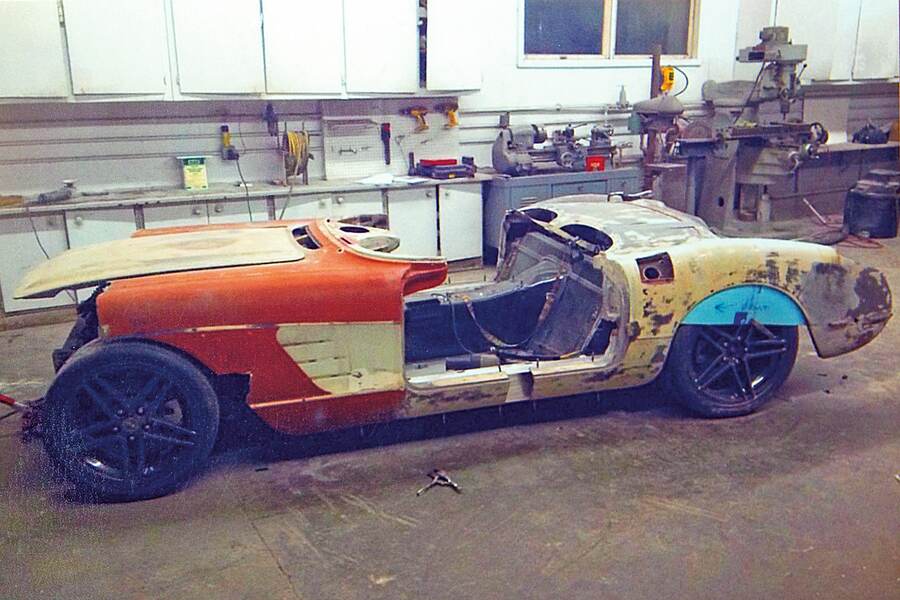 The Corvette pre-modification, with its original red-and-white finish still visible on the front fenders. Note the C6 Z06 wheels, which Spohn installed early on for measuring purposes.

“This made me realize a C1 or C2 would be an easy build for me,” he says. “The body would make the perfect starting point for a restomod in the condition it was in, plus I knew the car would be valuable when completed. I found a mostly complete body shell for $1,900 and started the process.”

Though the seller originally planned to hang on to the C1’s official paperwork so he could continue to part out the chassis, Spohn’s offer of another $950 netted him the body, the chassis, and a clear title.

The project got underway in September of 2014. As for the C6 platform, it was salvaged from an ’08 Corvette with 30,000-plus miles that had been hit hard in the front end and written off by the insurance company. Spohn was happy to find that everything he needed was still there, and usable. 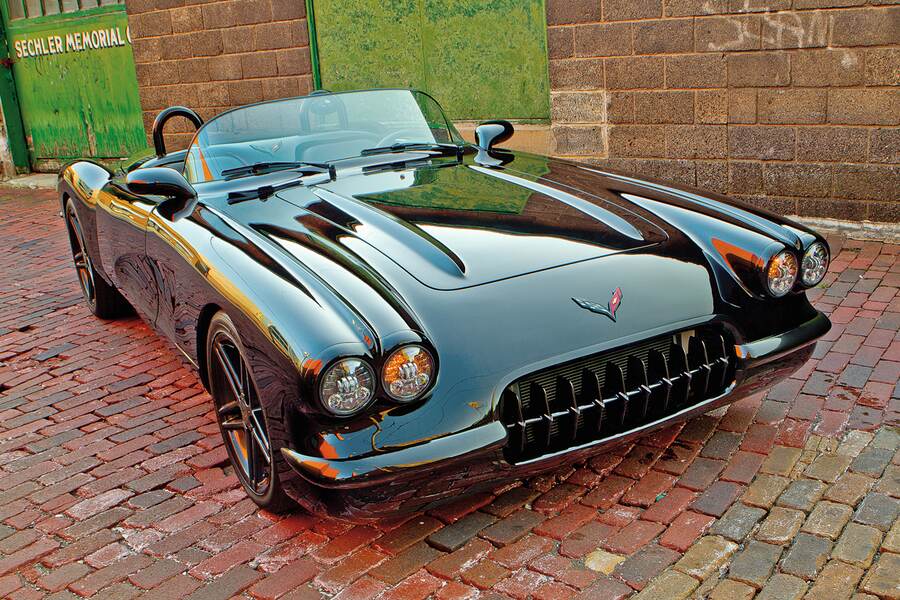 He wanted this particular C6 because it was delivered with the 6.2-liter LS3 engine, which debuted in 2008 boasting 430 horsepower at 5,900 rpm and 424 pound-feet of torque at 4,600 revs. As installed in the ’60, the powerplant remains fairly stock, with an aluminum block, wet-sump oiling, a cast-iron crank, powdered-metal connecting rods, and cast-aluminum pistons. Ported aluminum heads and a more aggressive Comp camshaft, meanwhile, help unleash more of the LS3’s sizable performance potential.

Atop the engine are the stock throttle body, mass-airflow sensor, and injectors, but Spohn did tune the factory ECM to work optimally in its new configuration. He also crafted a special air box to make room for a K&N conical air filter, and installed ceramic-coated headers feeding a pair of three-inch Magnaflow pipes and mufflers. The system ends in a black-anodized set of quad tips beneath the rear valance.

Spohn estimates that his engine delivers about 560 hp at the crank and a more-than-sufficient 480 horses at the rear wheels. It’s bolted to an upgraded C6 automatic transmission featuring a Chevy Performance torque converter with a 3,200-rpm stall speed. The flywheel, driveshaft, and rear axle are all stock C6. 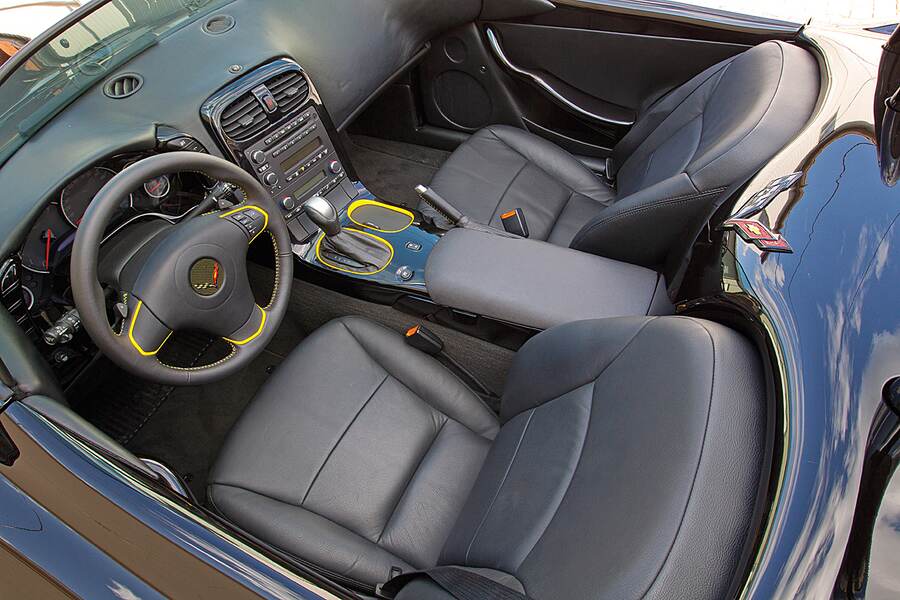 Many of the donor C6’s interior parts were carried over, including the steering wheel, center console, and IP.

Spohn also played with the underpinnings at both ends to get the ride and stance he wanted. Like the C5 before it, the C6’s stock suspension consists of independent, unequal-length double wishbones with mono-leaf transverse composite springs, what Spohn refers to as “buggy springs.” Not too many years ago, Corvette Executive Chief Engineer Tadge Juechter described this setup as “unique and efficient,” but by the dawn of the C7 era its days were clearly numbered. Indeed, the new-in-2020 C8 employs coil springs all around.

Since those mono-leaf springs didn’t allow him to set up the car the way he wanted, Spohn replaced them with a set of coil-overs with adjustable titanium springs from Stance. To “take the slop out” of the various rubber suspension components, Spohn installed Delrin bushings; he also dropped the chassis by about three inches. Both the front and rear anti-roll bars are Z06-spec units, measuring 1.22 and 1.35 inches, respectively. The steering remains a hydraulic-assisted rack-and-pinion system, but the factory airbag was deleted from the column and wheel.

That’s the “go” part of the chassis equation. For the “whoa” portion, Spohn called upon Z51 brake calipers and Z06 cross-drilled rotors mounted behind stock Z06 alloy wheels. For those of you keeping score, those rims are a huge 18×9 inches wide in front, clad with fat Nitto Invo 275/40s, along with even larger 19×11s wearing Invo 325/30s in the rear. 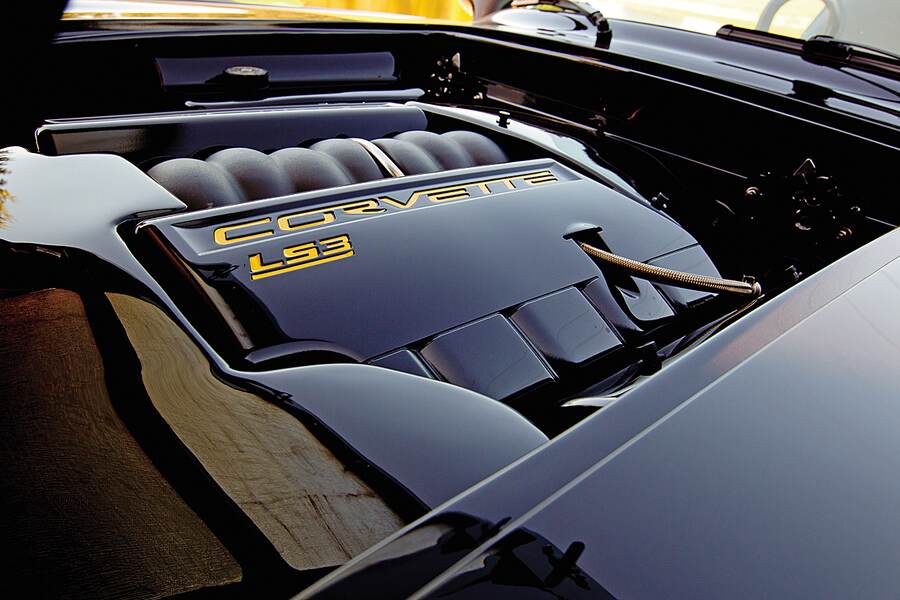 Now let’s go topside, since that’s the part startled onlookers see first when this black beast rumbles into view. For 1960, the Corvette’s body continued the lines of the quad-headlight ’58 and ’59 models, but it would be the last of that generational design, giving way the next year to a taller, tapered rear deck emphasized by a belt-line crease beginning at the rear wheel arch and carrying rearward to a four-tail-lamp rump. Spohn pulled out his ruler and power saw and, like a plastic surgeon—literally in this case—began slicing and dicing the factory shell.

He widened the rocker panels by 2 inches on each side in front, and an inch on each side at the rear. The body was lengthened 4 full inches at the door openings, and the rear quarters were stretched another 4.5 inches on each side. The vented front fenders swelled by 3.5 inches and lost their chromed strakes.

The nose section is completely new, extending an extra 2 inches from the doors to the front fenders, but the hood retains Corvette’s iconic twin “speed” creases from the period. Spohn fabricated a new cowl that allowed for the fitment of the stock C1 windshield, which he edged with a strip of composite trim and then dropped into the cockpit behind the instrument panel, lowering its overall height. A small, oval rearview mirror was glued to the center of the glass. 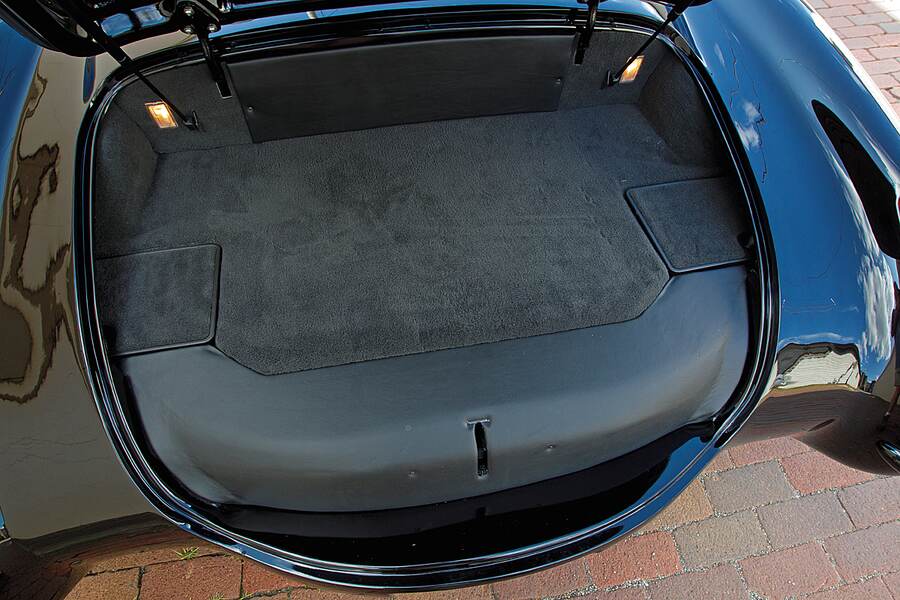 Custom-finished trunk features hidden storage compartments at each side, along with a center panel concealing Bose audio gear.

Spohn next crafted a new rear cowl, complete with C7 crossed-flags emblem, to fill the space between the seats and the trunk lid. The stock Corvette “waterfall” wouldn’t work because it wasn’t large enough, as the C1 buckets had been swapped out for a pair of seats from a Subaru Forester. The Subie’s headrests were deleted before the new buckets were reupholstered in leather, and contrasting yellow trim was added to the steering wheel and console. Spohn even made up a pair of leather-covered door cards that hold molded armrests and speakers for the Bose stereo.

Some amount of roll-over protection comes in the form of a pair of safety hoops salvaged from an Audi TT convertible and finished in black chrome. The stock C6 air conditioning and instruments were retained, but Spohn did delete the OnStar system. The dashboard was covered in hand-crafted leather, and a pair of Corvette-logo scuff plates were added to the interior door jambs.

As the car was built to run open-top, Spohn gutted the doors of their factory windows and lift mechanisms. He did, however, have to install a pair of windshield wipers to meet state requirements; these came, oddly enough, from a Porsche 911. Also in the name of legality, side mirrors from a C6 were modified to fit properly and bolted on, while multi-bulb LED units in the quad headlamps furnish 24-hour drivability. An LED cluster is used in each of the custom, flush-mounted tail lamps as well. Spohn used stock ’60 lenses but created new housings beneath. 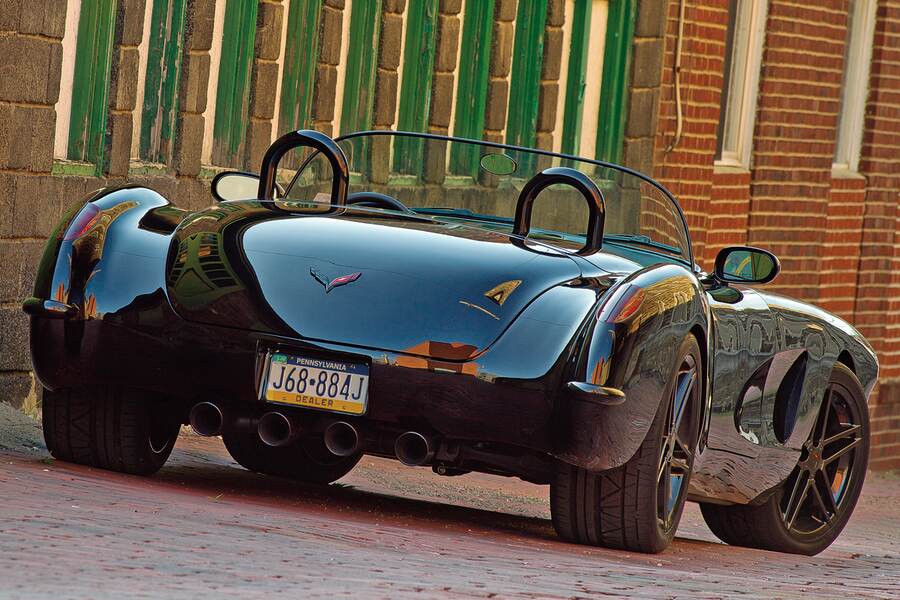 Looking beneath the hood, what we can see of the LS3 is beautifully detailed, but the gleaming engine covers don’t reveal much in the way of the beast within. At the rear of the car, the trunk lid is supported by a pair of off-the-shelf pneumatic struts, but Spohn did craft a lovely, leather-and-carpet-covered floor to hide the spare tire and tools. There are also two small storage spaces, one on each side, along with a removable center panel concealing the Bose stereo amplifier.

A pair of minuscule “bumperettes” protect the edges of the rear fender caps, flanking a deeply recessed license-plate bay. Similar mini-bumpers, now flanking a widened, 10-tooth grille, provide a bit of protection up front. As you might expect from a car built by an expert body-and-paint guy, the panel gaps are perfect, and the black paint looks as though it wants to pull you beneath its gleaming surface.

When all was said and done, Spohn’s masterpiece weighed in at about 2,900 pounds, roughly 100 fewer than an original ’60 convertible and a substantial 150 fewer than a stock C6 Z06. Given the increased power, that makes for an entertaining ride. “It has quick acceleration, drives like a dream, [and] handles like it’s on rails,” says Spohn. “I love the ride quality.” 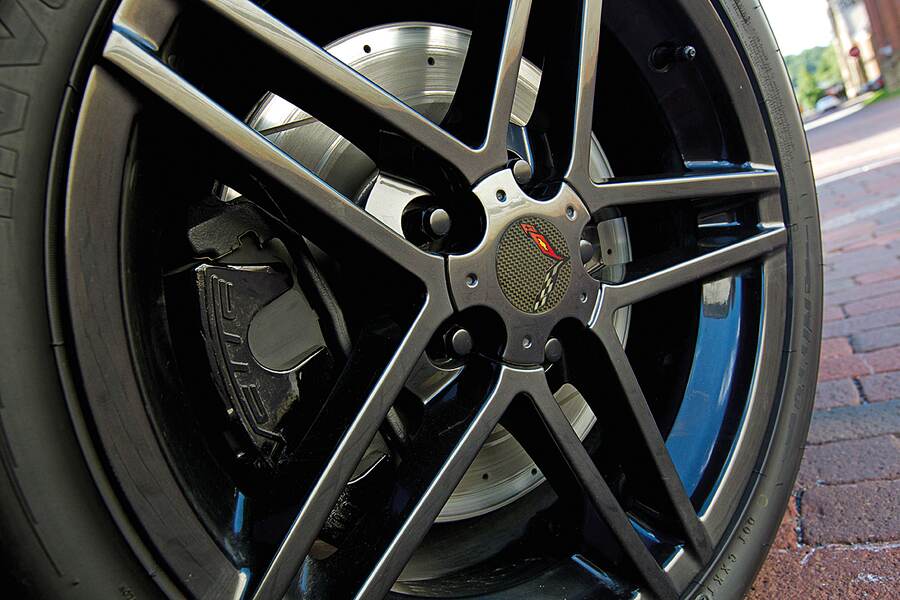 Because it lacks a top, this black restomod is a summer-only driver, but when Spohn does take it out on the street, it never fails to turn heads. “I love the look on peoples’ faces, wondering what kind of car it is,” he says. “It makes you scratch your head trying to figure it out. I hear ‘Batmobile’ mentioned every other comment by people who see it. [I’m] so glad we saved it and made it into the coolest ride around.”

Adds his wife, Renee, “All of his cars are beautiful, but this one is particularly sleek and sexy. A Corvette is just sporty and fun to drive, and this one does not disappoint.” 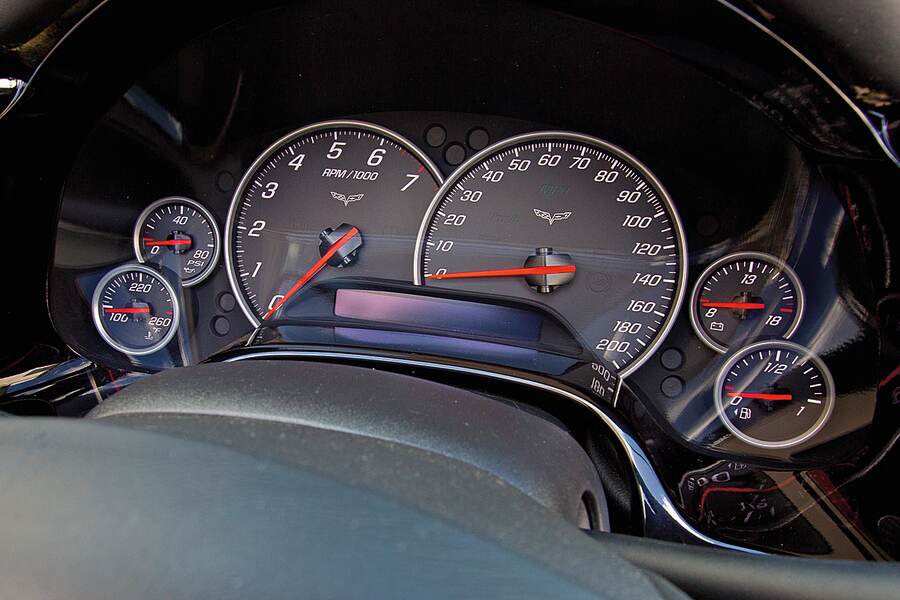 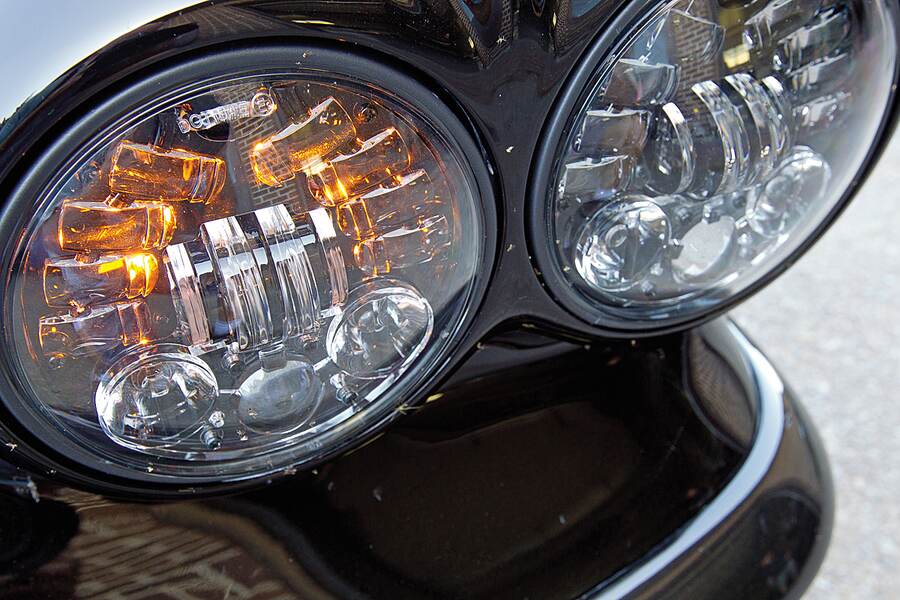 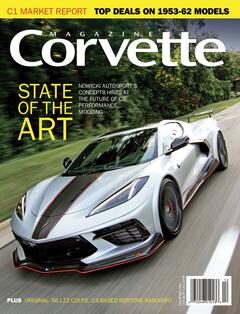