A Different Kind of Restoration 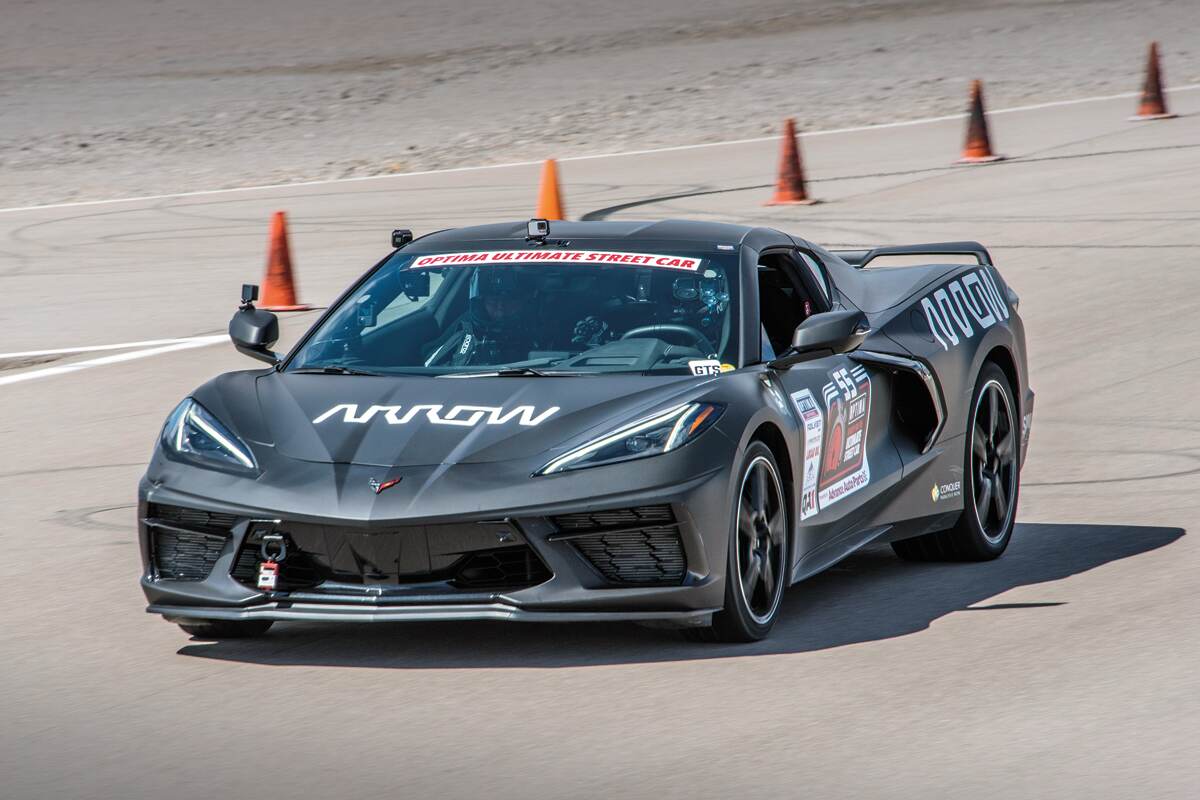 What would you do after sustaining a serious spinal-cord injury? If you’re a successful IndyCar racer like Sam Schmidt, you find a way to fight back from adversity. A devastating crash back in January of 2000 left him confined to life in a wheelchair as a quadriplegic. But he’s now driving Corvettes on both the road and track.

While many in this extreme circumstance might be inclined to resign themselves to their disabilities, Schmidt is one tough competitor, and he refused to give up. So when Arrow Electronics approached him with a proposal to showcase the company’s capabilities on a Corvette so he could drive again, he didn’t hesitate for a second. But with one condition: “If the goal is not going over 100 mph, don’t bother me.” Turns out he would later more than double that speed on the former NASA Space Shuttle runway at the Kennedy Space Center, in January of 2021.

Achieving these speeds required the creation of the Arrow SAM (Semi-Autonomous Motorcar). It’s a “humanitarian technology initiative” that uses electronics in a new and unique configuration, empowering a quadriplegic to drive on the racetrack as well as legally on the street. The SAM proves that, with some technology assistance, disabled people can have more mobility, providing them with a greater measure of independence. For Schmidt, however, it did way more, restoring his racer’s edge. 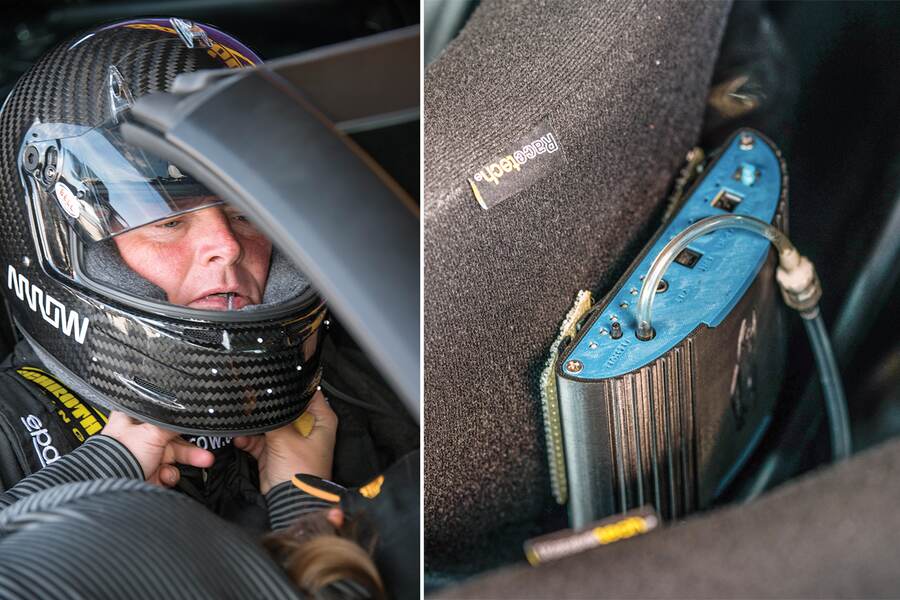 Schmidt preps for a lap in the Arrow C8. Mounted between the seats is the sip-and-puff tube that controls acceleration and braking.

The Arrow system starts with a stock C8 (and previously two C7s as well, one of which broke the 200-mph barrier). Schmidt wears a headset equipped with tracking sensors, similar in function to the green-screen motion-capture technology used in the movies for computer-generated effects.

Operating in conjunction with the headset are four infrared cameras that track the driver’s head motions within a fraction of a degree. Via tracking sensors embedded in the headset, those precise measurements are analyzed and processed into steering commands that are equal to or even quicker than conventional manual steering. Steering software is sensitivity-calibrated for different types of driving and courses.

As for throttle and braking, they are controlled by a breath-pressure system and a tube the driver holds in his mouth. Schmidt puffs into the tube to accelerate, and sips or inhales to slow or stop. Sensors inside the tube send information to the sip-and-puff computer, which translates the data into motion commands for the car. One electric motor controls both the throttle and braking, the other the steering. 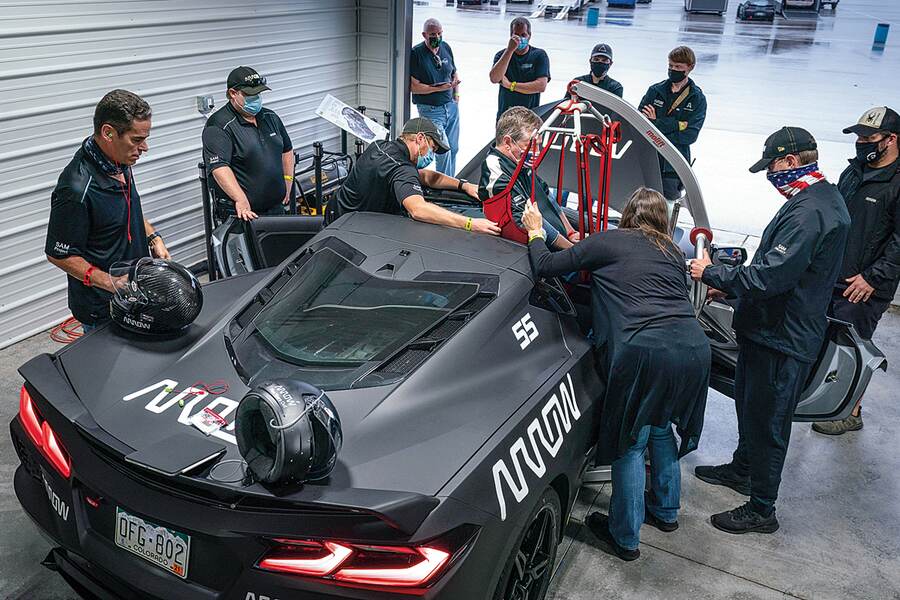 In addition, the car is equipped with Arrow’s Connect IoT (Internet of Things) platform, basically a way to make mechanical devices “smart” and interconnected—think of a refrigerator texting your smart phone that you are out of milk. On the Arrow C8, the platform is way more sophisticated than making a grocery list, however. It enables the live streaming and replay of telemetry, driver biometrics, and environmental conditions, along with the driver’s point-of-view video. A custom engineering dashboard monitored by Arrow engineers allows them to quickly pinpoint and correct issues as they happen. Several other functions are voice controlled.

At its most fundamental level, Arrow’s Connect IoT is a layer of technology that collects data on all the systems in the car and, if desired, on the driver. “Not only can we monitor performance in real time,” explains Joe Verrengia, Arrow’s​ Corporate Social Responsibility Director, but the data are saved in the cloud for future analytics, and those insights contribute to future improvements.”

Interestingly enough, Verrengia notes that when Schmidt drives fast his heart rate actually decreases, a proven indication of an athlete “being in the zone,” where the game (or race, in this case) slows down for them. 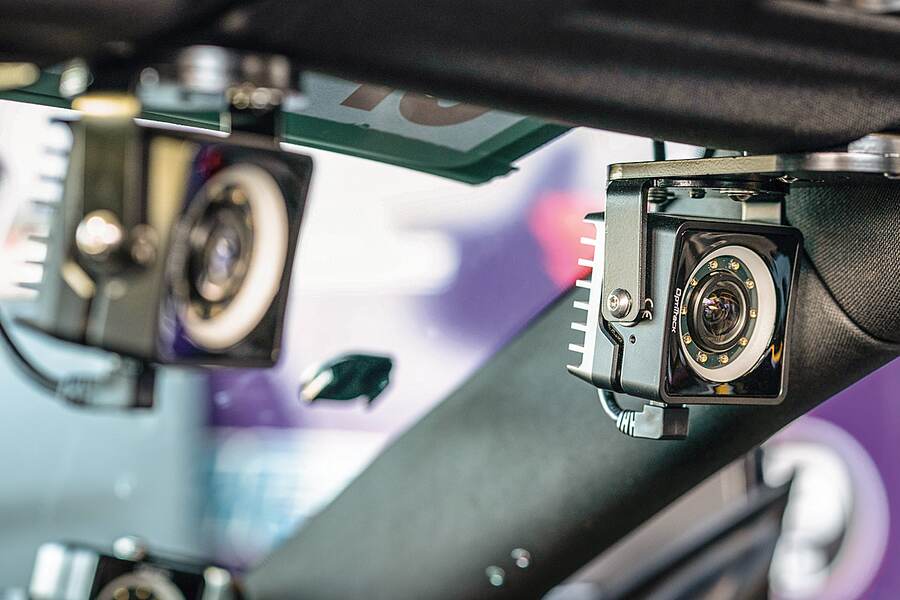 “If I was going racetrack speeds, I’m sure I would be climbing out of my skin,” Verrengia admits. “That’s one of the major differences between an IndyCar driver and the rest of us. Schmidt does more than tolerate the speed and the risk. He actually reacts and concentrates.” And surely dials into the correct line on the track, as racing is as much mental as physical.

For safety reasons, an able-bodied co-driver rides in the other seat. On the day we met Schmidt at the Las Vegas Motor Speedway’s road course for the Optima Challenge, that driver was famed racer Robbie Unser. He uses separate conventional controls if needed to override the Arrow system.

How well does the Arrow C8 work? After a hard-running session on the road course, Unser made a remarkable comment to Schmidt about one lap in particular: “I couldn’t have done any better. And even after you dropped a wheel into the dirt, you were still reeling them in!” 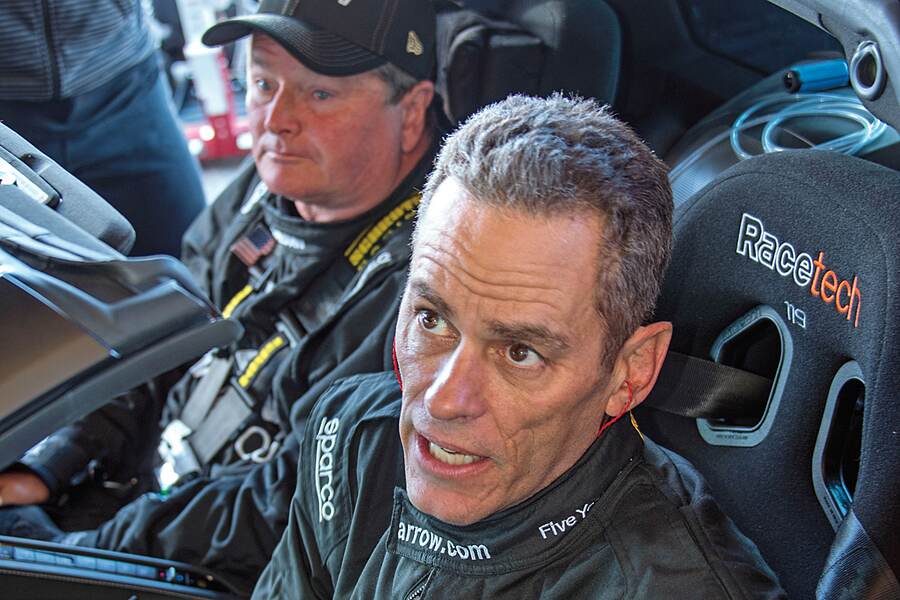 Schmidt and Unser were actually fierce competitors some 22 years ago, but now they work together on the SAM project. How did that pairing come about? Arrow recommended that Schmidt have a professional co-driver, partly because the engineers were a bit reluctant to ride with him at the speeds that he insisted on for a Pike’s Peak run. Schmidt agreed, but then stated, “I want Robbie Unser.” (After all, Unser has won that event a record nine times.)

Schmidt points out that the technology is so good, it’s no different than driving with hands and feet. One big change in the C8 is that he now drives from the right (passenger) side, partly because this position makes it easier to get in and out of the car using an engine hoist with seat webbing. And also his visibility is better, with more options for mounting the infrared cameras.

“It feels like I’m in a living room playing

a video game,” he laughs. All told, the experience is very liberating for him, not only from the standpoint of allowing him to drive again, but also emotionally, as he feels it opens him up to a whole new realm of other endeavors. He believes this semi-autonomous technology could have broad applications in many other areas of life. 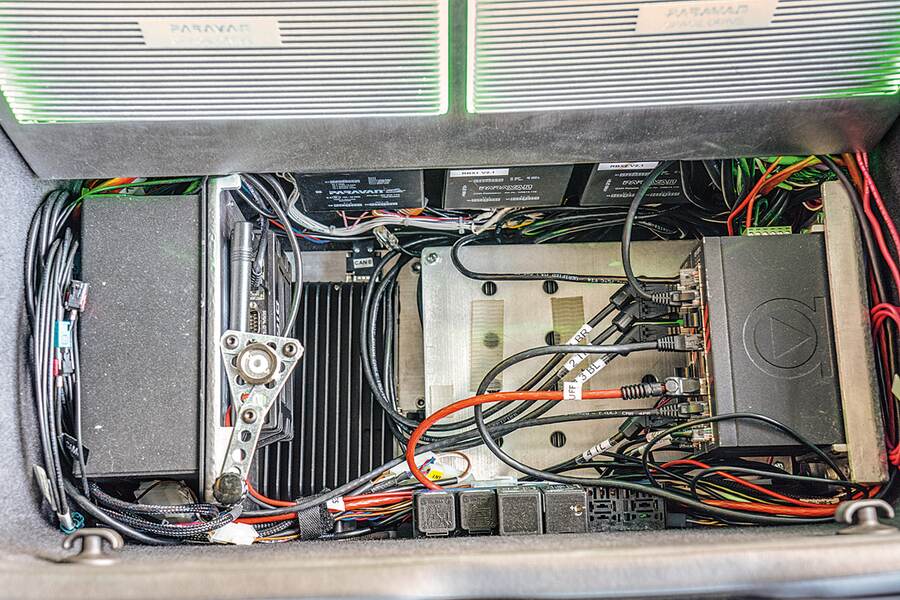 We were curious how he compares his two C7s, one of them a Z06, with the new C8. “The C7s were amazing improvements over the C5 that I drove before my accident,” he says. “But the C8 is unbelievable. It’s beautiful and very responsive, a perfect platform to demonstrate how technology can make life better for people with disabilities.”

Note, too, that it’s a totally stock factory car, aside from the Arrow modifications. Schmidt points out that most of his IndyCar racing career involved rear-engine cars, so he’s actually more comfortable with the C8’s mid-engine setup.

“Weight distribution has a dramatic effect on balance,” he observes. “It’s really highlighted on road courses at speed.” With all the electronic suspension settings available, he prefers running in the Track or Sport modes. 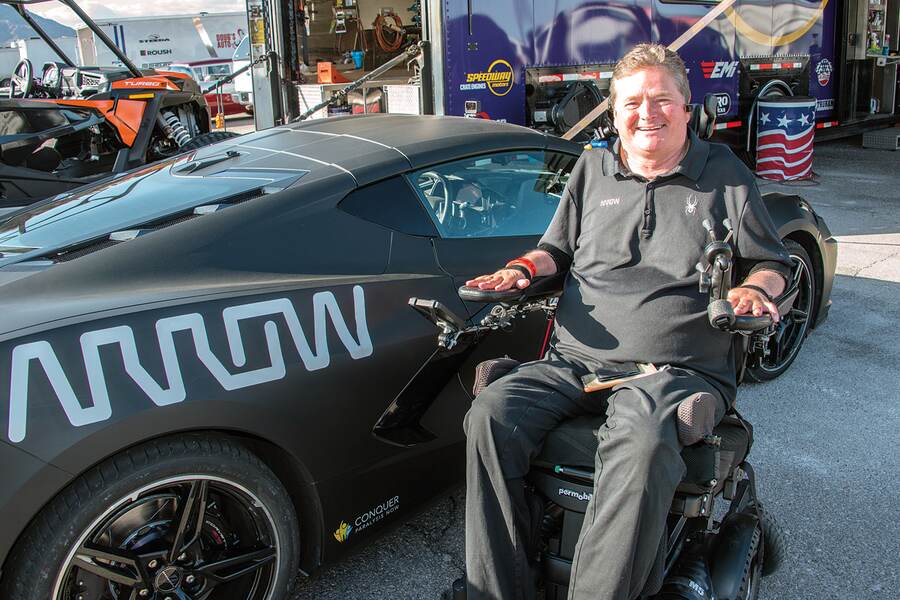 In contrast, he had to use more throttle steering with his higher-powered, front-engine C7s to kick the tail out and drift around the apexes. “So it’s not apples-to-apples when comparing the two cars.”

Not surprisingly, he’s looking forward to some horsepower upgrades for the C8, possibly a Lingenfelter package, to take the car to even greater performance levels. Achieving the Arrow C8’s current capabilities has been no easy task, however. During the initial seven-month development period, “There were at least of hundred different challenges that had to be overcome,” Schmidt relates, alluding to issues of lighting, visibility, and calibration. “I keep challenging [Arrow’s engineers], and they keep answering the call.”

Did Schmidt’s racing background help with the development? The two were remarkably similar, he says. “Mainly in the process, continually trying to make yourself better. I worked with four to five engineers, in the same scenario—I gave inputs, and engineers [did] their job.”

Given the success of the Arrow setup on the C8, Schmidt has other types of track events in the works, such as the Goodwood Festival of Speed’s hill-climb event in England. The benefits of the SAM system are not limited to the racetrack, though. He’s been able to take his kids for a drive on the street as well, showing them around the tourist attractions of Washington, D.C. He notes that the Arrow electronics could conceivably be used on a variety of applications, for remotely operating all sorts of farming and industrial vehicles in restricted or hazardous situations.

Schmidt’s project hasn’t always been a series of obstacles, though, as he had a light-hearted encounter with Jay Leno at Spring Mountain’s road course. The comedian kept cracking so many off-color jokes about “orally operating” a Corvette that Schmidt began laughing too much to drive it well. (Yet Leno also had some difficulty in his attempts to sip and puff on the mouthpiece.)

One serious question did come up later, though: After experiencing such a devastating crash, was it difficult for Schmidt to get back out on the racetrack? What helped him regain his confidence?

“[It was] totally motivational…I didn’t expect to ever drive again,” he admits. “I had another reason to get up every morning.”

We can all learn from Schmidt’s tenacity and drive. What sort of advice does he give disabled individuals taking on this sort of endeavor? “Find your passion,” he recommends. “[Ask yourself], ‘What’s the big-picture goal?’ Don’t let anyone tell you you can’t do it—that’s been my motto in life.”

Schmidt points out that the technology is now available for disabled people to compete with the non-disabled. All told, he feels that there are a lot of things you can do from a wheelchair—even drive a new Corvette. 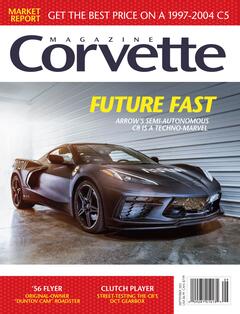