The Sound of Speed 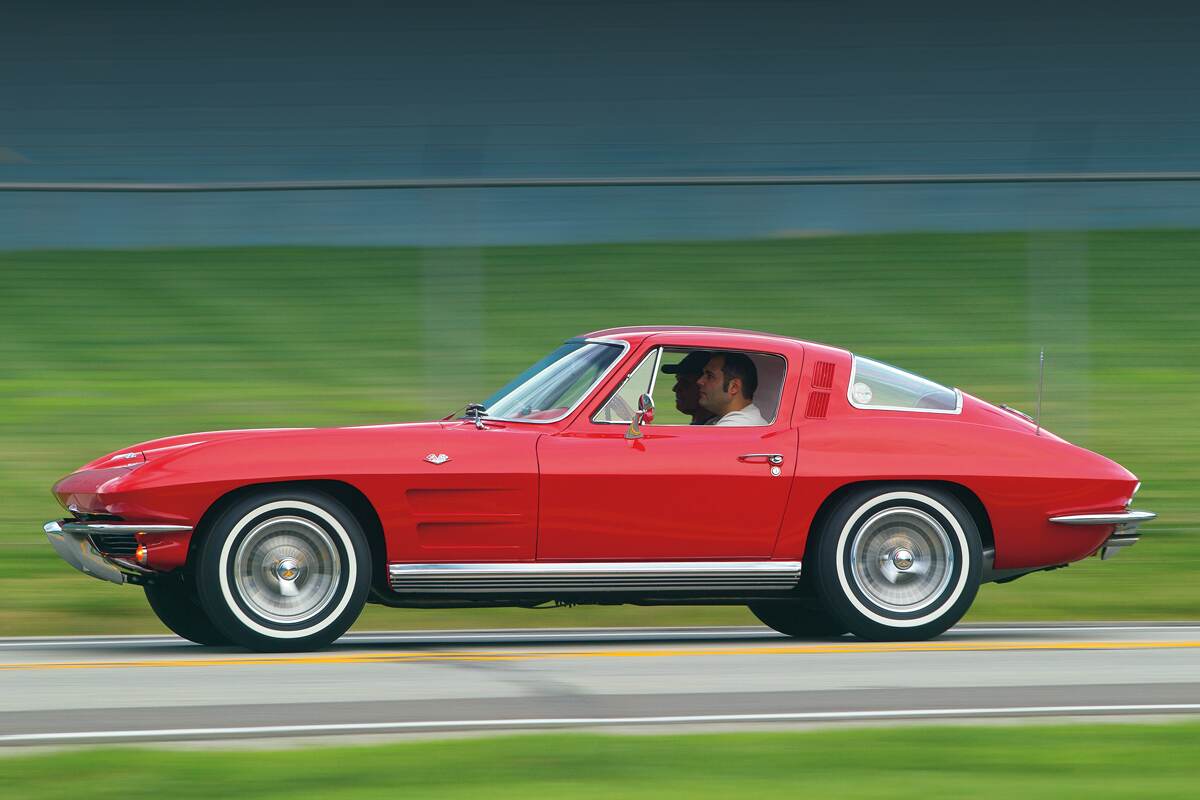 There’s fury in the sound of a solid-lifter small-block in an early Corvette. At idle, it’s the aural equivalent of watching a fighter before an event, as he impatiently hops and bounds in place, taking practice jabs to focus pent-up energy before the bell rings. At full throttle, that fury explodes with a marvelous mechanical wail. It’s the sound of high performance from the points-and-condenser era, and there’s nothing else quite like it—with none other than Zora Arkus-Duntov himself to thank for it.

The Belgian engineer and sometime racer pushed from the very beginning to up the performance quotient in the Corvette, recognizing the almost limitless capabilities of Chevy’s compact, overhead-valve V-8 as installed in a lightweight sports car. By 1956, there was an over-the-counter high-lift, long-duration camshaft—known as the “077” cam, for the last three digits of its part number—that also found its way into the Corvette’s optional 240-horsepower engine.

A year later, a revised version of the camshaft was introduced to accommodate block changes that eliminated the need for an oil groove on the cam’s rear surface. The lift decreased a smidge, to 0.395-inch (intake) and 0.401-inch (exhaust), but duration remained at 228/230 degrees at 0.050-inch lift. Consequently, it got a new part number, one that ended in “097” but would go down in history as “the Duntov Cam.” 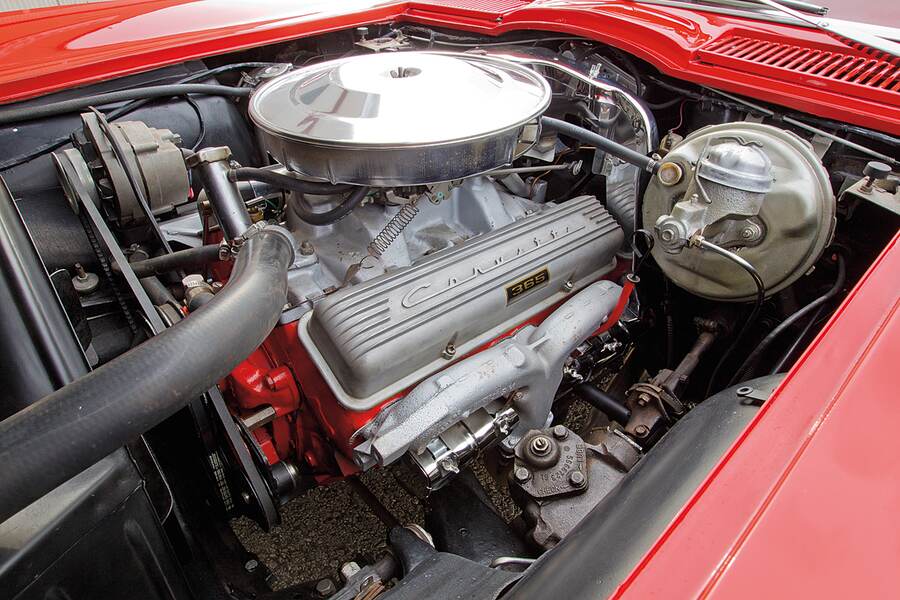 The solid-lifter small-block was Corvette’s second-stoutest engine offering for ’64. Though it made a jot less power than the Rochester-injected L84, the carbed L76 was far easier to maintain.

It was a pretty radical grind for its day, and one best suited to the sort of wide-open, high-rpm performance that Duntov wanted in order to make the Corvette more competitive in road racing. If there was a trade-off, it was in low-speed performance. This camshaft liked to rev, not loaf about at low rpm. Nevertheless, Chevrolet would use the Duntov Cam in all of its solid-lifter performance engines through 1963, even though its performance capabilities were stretched a bit thin by the larger displacement of the 327 introduced in ’62.

The next generation of solid-lifter performance camshafts came in 1964, which helped push the bigger 327’s maximum output to 365 horses in carbureted form, and 375 hp with the fuel-injection option. Known as the “30-30” cam, for its comparatively loose 0.030-inch lash specs (for both intake and exhaust), the new grind was a high-rpm monster: 254 degrees duration, 0.485-inch lift, and a relatively wide 114-degree lobe-separation angle.

No, there wasn’t a lot of low-rpm power with 30-30 camshaft, but that was of little consequence while winding it out at Watkins Glen or Sears Point, or even going fender-to-fender with a Jaguar XKE on I-95. In short, the solid-lifter ’64 models drove the C2 Corvette to the next level of performance Duntov had long sought. 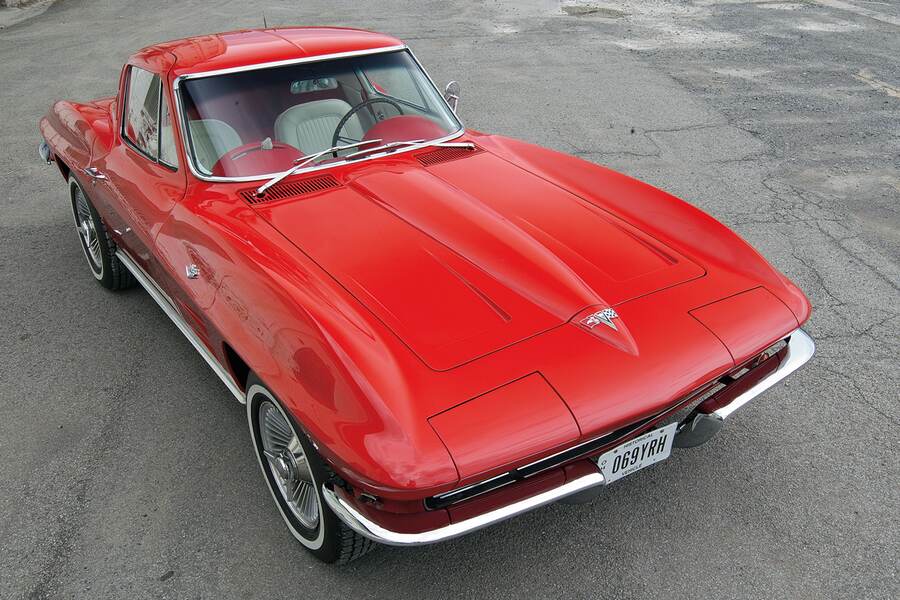 Jason Mauro’s father, Mike, became hooked on the C2 experience in the late-’70s, after a ride in a friend’s ’63 roadster. He started a search for his own and found one literally across the street, in the form of a ’64 coupe that happened to have its numbers-matching, L76-code, solid-lifter 327/365 with the famed 30-30 cam. It was popular option for the year, accounting for about one-third of the entire production run.

“My dad bought the car for $4,100,” says the younger Mauro, a local television news producer in Youngstown, Ohio. “It was in decent shape, but came with some amateur bodywork on one of the front fenders that appeared to include an entire can of Bondo.” Additionally, the original white-and-red interior had been replaced with black, button-tufted trim on the seats and other interior panels.

“It was like sitting in a coffin,” says Mauro, who adds that he and his brother—also named Mike—would lay lengthwise in the cargo area on trips to their grandparents’ house. “My mom would even take me to pre-school in it when I was four, but I could never open the door to get out, with that slider-ball inside, so the teacher would come up and open the door for me.” 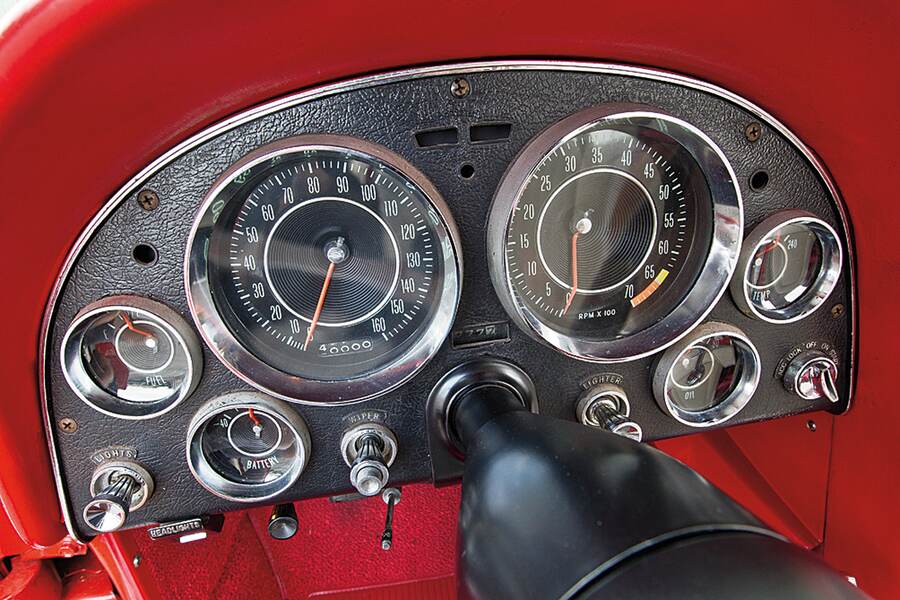 As the markings on the restored factory tach attest, Chevy’s “30-30” cam was a high-winder that made much of its power in the upper rpm range.

It was around 2013 that Mauro and his father committed to a complete restoration of the solid-lifter ’64, starting with the bodywork. The original, poorly repaired fender was replaced with a fresh panel and bonding material from Pennsylvania-based resto specialist Bair’s Corvettes.

“My father and I spent untold hours sanding, while adding and removing fiberglass as necessary to get every body line and every gap better than new,” says Mauro. “That included not just that replacement fender, but the headlight doors, fresh-air vents, and all the door gaps. It was a lot of work, but it paid off. The car looks straight as an arrow, with excellent gaps all around, and there’s no sign the fender was replaced.”

When all the fiberglass dust settled, the car was re-sprayed its original Riverside Red by Mauro’s father. “It’s a great color,” says Mauro. “It ‘laid down’ orange but dried red—and in certain lighting there’s an orange-like quality to it. It looks great.” Buyers apparently agreed back in ’64: At 5,274 units sold, Riverside Red was by far the most popular Corvette paint shade that year. 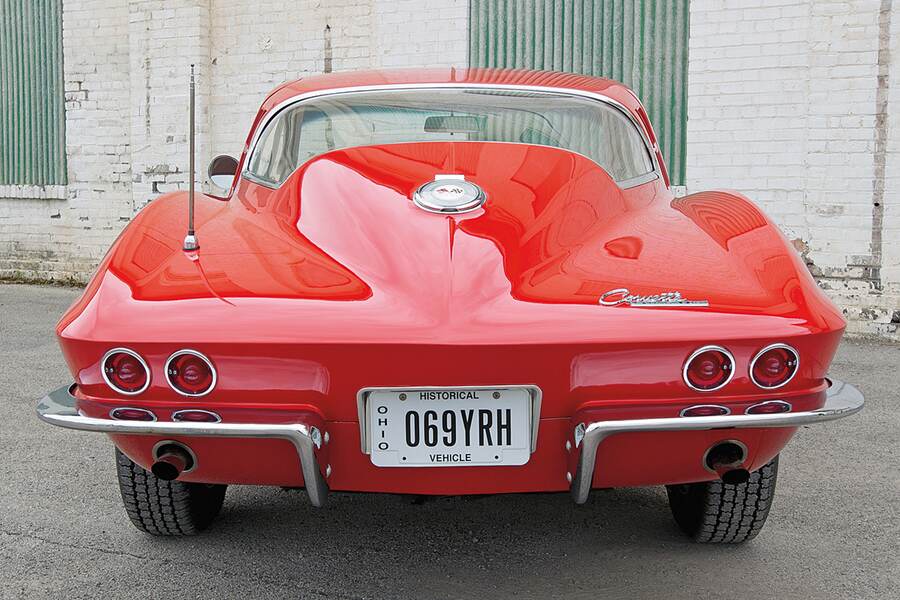 The restored body resides on a refurbished chassis that was also returned to stock specifications. Bair’s Corvettes rebuilt the trailing arms and discovered that, prior to the Mauros’ ownership, one of them had been replaced with an arm from another model. A correct replacement was used on the restoration, and the Mauros also swapped out the rear leaf-spring assembly. Additionally, the rear brake lines and fuel lines were upgraded to stainless-steel hard units, with braided-steel hoses replacing the stock-spec front brake hoses.

Inside, the funereal tufted upholstery was replaced with the same white-and-red trim combination that was originally installed at the St. Louis factory. Mauro and his father did all of the work themselves apart from reupholstering the seats, which they left to Cortland, Ohio’s Cyclone TNT.

“We laid Dynamat throughout the cabin to help reduce heat and sound,” says Mauro. “We also covered the fiberglass panel, where the dome light mounts, with white vinyl. [It] looks a little more refined that way.” 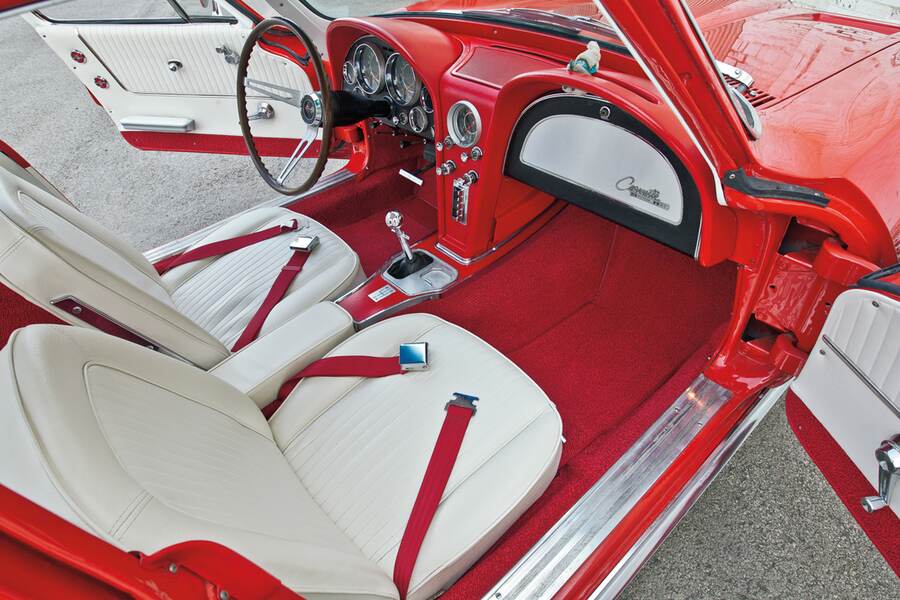 Similarly, the father-and-son team trimmed the normally exposed fiberglass area on the inside of the rear quarter panels, near the rear window. “It looks a little more complete that way,” says Mauro. “Wherever you look inside the car, it has a more complete, trimmed appearance.”

When it came to the original “30-30”-cammed 327, Mauro says the car’s restoration was nearly complete when it started knocking. After tearing down the engine, it was discovered that not only had a wrist pin gone bad, but some of the pistons were incorrect. Fortunately, Boardman Engine and Machine in Youngstown was able to rebuild the engine to stock specifications, restoring its full performance potential as well as that inimitable exhaust tone.

“There is nothing like the sound of the engine with that unique camshaft,” says Mauro. “When I was a child, the sound scared me and I thought it was too loud, but I absolutely love it now. In fact, even with the N33 off-road exhaust we put on the car, I think it could still be a little louder.” The rest of the car’s drivetrain is stock, including a Muncie M20 close-ratio four-speed and the correct 3.70 gears that came standard with the L76 engine option. 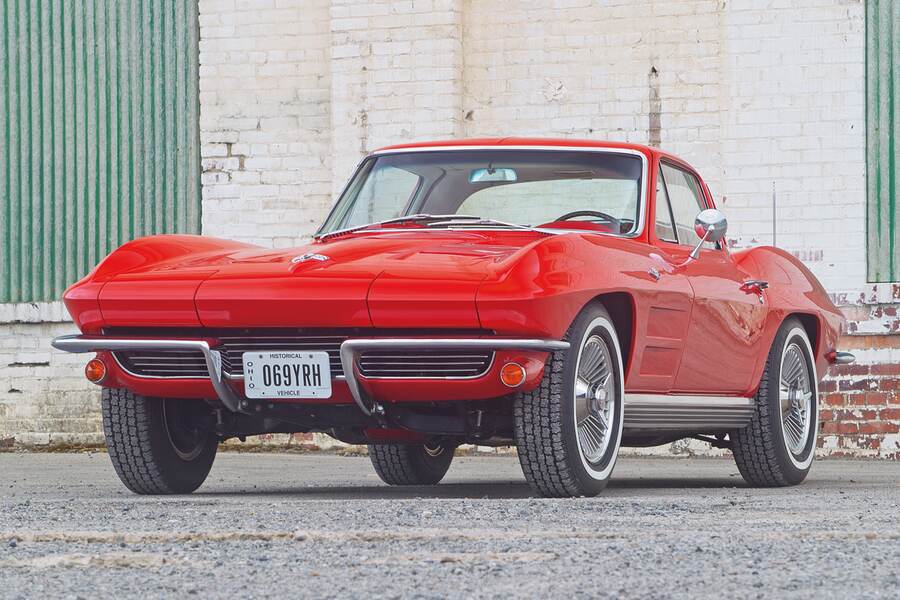 “Growing up, the car was always enjoyable, but there was always something wrong with it,” says Mauro. “The wiring had issues, the carburetor was also messed up, and for some inexplicable reason, the vacuum advance was never connected. It was always something, but now everything is sorted and the car is an absolute joy to drive.”

A close look at the car reveals the patina of a number of original components that were simply cleaned up and reinstalled during the restoration. It’s a refreshing take, when 100-point perfection is often the goal with many such projects.

“It was restored to our standards,” says Mauro. “It was restored not for shows and awards, but to be driven and enjoyed by our family. We drive the car at every opportunity, because there’s something truly unique about the experience of a C2.”

There’s also something unique about those classic, solid-lifter small-block engines. They revved like few other V-8s of their day, and nearly six decades later they still have the anxious, ready-to-rumble sounds of that pugilist itching to burst out of his corner. It’s the sound of Corvette fortitude, and it was all thanks to Duntov’s obsessive quest for performance supremacy. 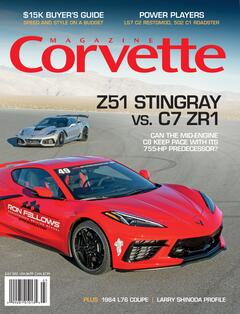