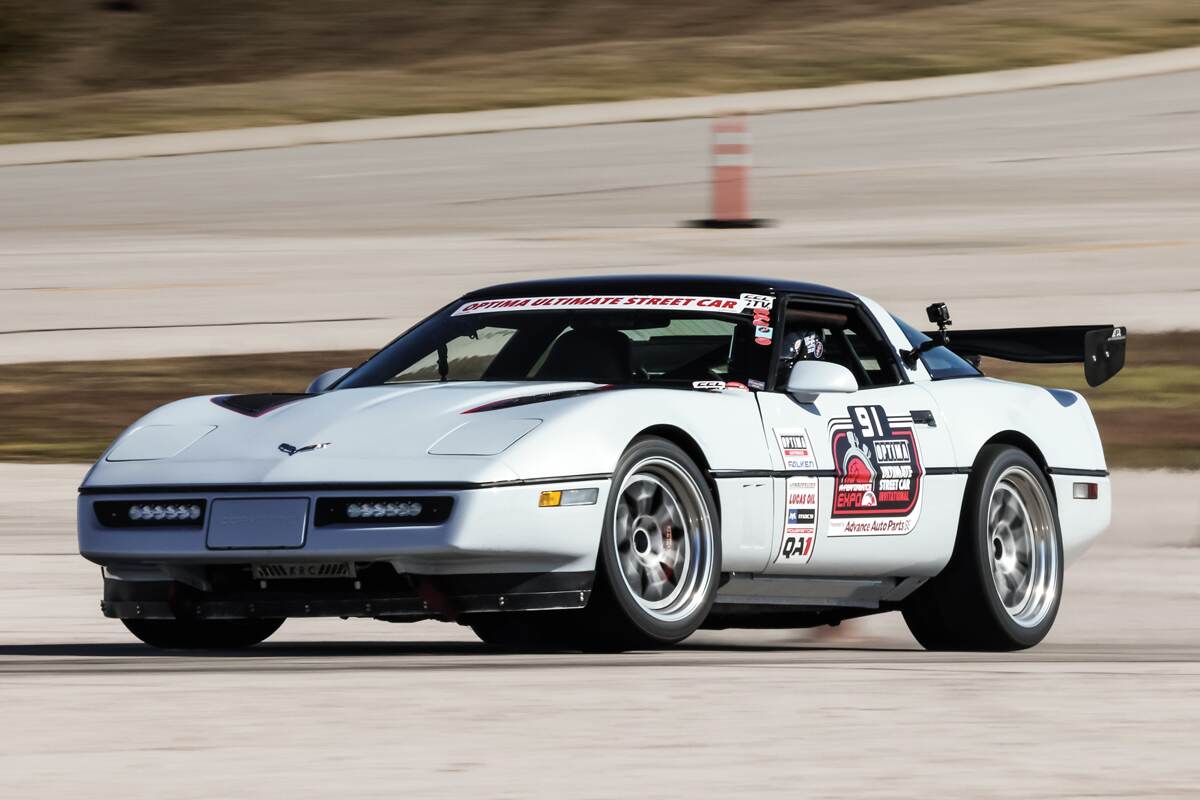 Even though the new-for-1984 C4 Corvette represented a significant engineering advancement over the previous model, not everyone was impressed at first. To be fair, the car did boast a vastly more capable chassis, and its angular, wedge-shaped design sliced through the air far better than did the curvaceous C3.

On the other hand, the carryover Cross-Fire 350 only mustered a feeble 205 horses, and it was paired with a fidgety “4+3” manual transmission. Though these initial shortcomings would be rectified in the years that followed, for many the car continues to carry the unfortunate reputation as underperformer.

C. B. Ramey’s ’87 coupe obliterates any such residual criticisms, decisively demonstrating just how well the C4 platform can perform when equipped with an array of weapons-grade components. The proof? It handily won the 2020 Optima Ultimate Street Car Invitational (OUSCI), claiming the $25,000 “Baddest Street Car” prize in the process. 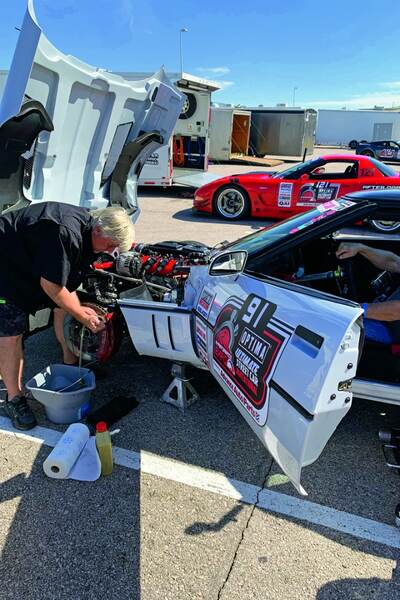 Sponsorships notwithstanding, mounting a successful OUSCI campaign is largely an exercise in self-sufficiency. Here, Ramey bleeds the Corvette’s brakes in the pits between rounds.

The Optima field runs deep with all kinds of cars and trucks, from Pro-Touring Camaros to heavily modified Mustangs, Euro exotics, and high-tech Japanese models, most featuring comprehensive engine upgrades and sophisticated suspension setups. Corvettes do, however, have something of a history at OUSCI, having won multiple championships under the stewardship of drivers such as Danny Popp, Todd Rumpke, and Brian Hobaugh.

No newcomer to Corvette ownership, Ramey has owned a slew of them over the years, ranging in age from a ’70 model through several C4s and C5s, and even a C6 Z06. Interestingly enough, though the latter car was fitted with all sorts of performance upgrades, it was not a favorite. “I hated that car,” Ramey says. “I really didn’t like how huge it was. I didn’t like the electrical gremlins. I didn’t like electric door knobs. I didn’t like having to work on the torque tube and such.”

It was this dissatisfaction with size and complexity that led Ramey to what would ultimately prove a far more satisfying alternative—his OUSCI-winning ’87 C4. But he actually didn’t start out with that event in mind. 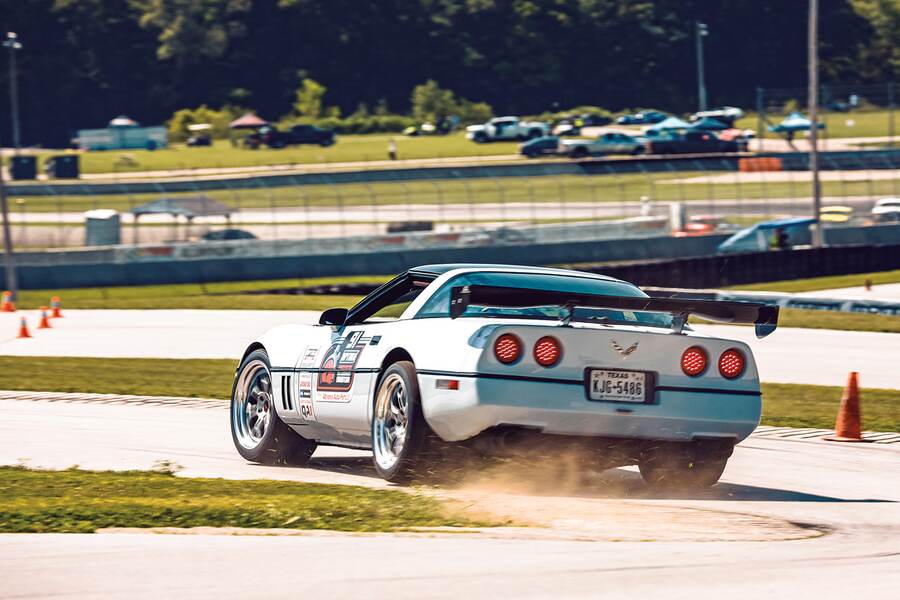 “I had the ’87 laying around, and the idea of [a car that is] state-of-the-art where it counts—and simple where it doesn’t—came to me,” he explains. So he swapped some of those C6 Z06 parts over to the C4. Most of the car was built on jack stands in his shop, underscoring what feels is a key point with regard to high-level performance builds: “The most important ingredients for an elite street car are perseverance, applying your talents, and getting the right friends to help out.”

One friend in particular was Erik Koenig of Horsepower Research (HPR), who shared some technical—and colorful—details about both the engine and working with Ramey. The two were roommates in college and members of the Texas A&M Sports Car Club, which had free reign to run on an unused air strip. That’s where Ramey cut his teeth as a driver, honing his skills. But Koenig says Ramey also developed a reputation with the local police department for his high-speed antics on College Station back roads.

“I had to get him out of jail several times for…traffic offenses,” Koenig recalls. “On one run the cops stopped him with a barrier in another town, as he didn’t know they were in hot pursuit. He’s a very good driver, but he can’t seem to drive normal speeds.” 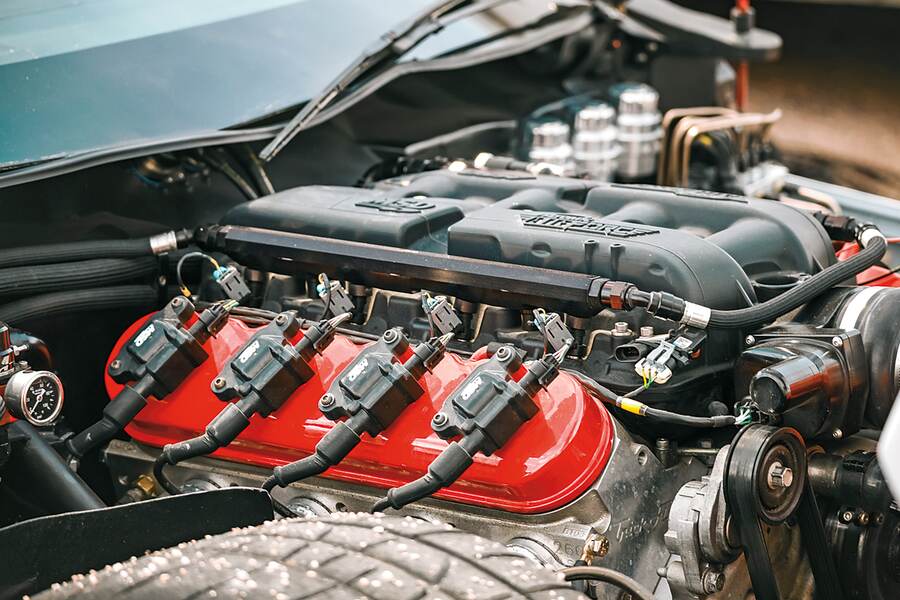 The original L98 has been jettisoned in favor of a 468-ci, LS-based engine generating some 750 horsepower.

Getting back to the engine, the LS-based, 468-cube mill delivers about 750 horses at the flywheel, running an 11.5:1 compression ratio on pump gas. Koenig has dyno’d about 120 of these engines with similar configurations, some for other OUSCI competitors, so he’s very familiar with the recipe.

HPR starts with a raw LS7 heads, but uses a Trick Flow TFS 257cc valvetrain with titanium intakes and hollow-stem exhausts. This setup was developed by Billy Godbold (a nuclear physicist by training) who worked at Comp Cams and took a personal interest in the design. Koenig notes that this valvetrain, which is based on systems used in 24-hour endurance racecars, was scaled back in size (compared with a stock LS7) to work in concert with the MSD AirForce intake manifold. “It maximizes the…torque all the way through the power band, from 2,000 to 7,000 rpm.”

That’s an important aspect for OUSCI road-course racers. With this configuration, Ramey was able to keep the C4’s engine in the heart of its power band with minimal effort. “You don’t have to shift as much, and you can ‘lug it’ down low,” Koenig explains. This characteristic allows Ramey to hustle out of the turns. 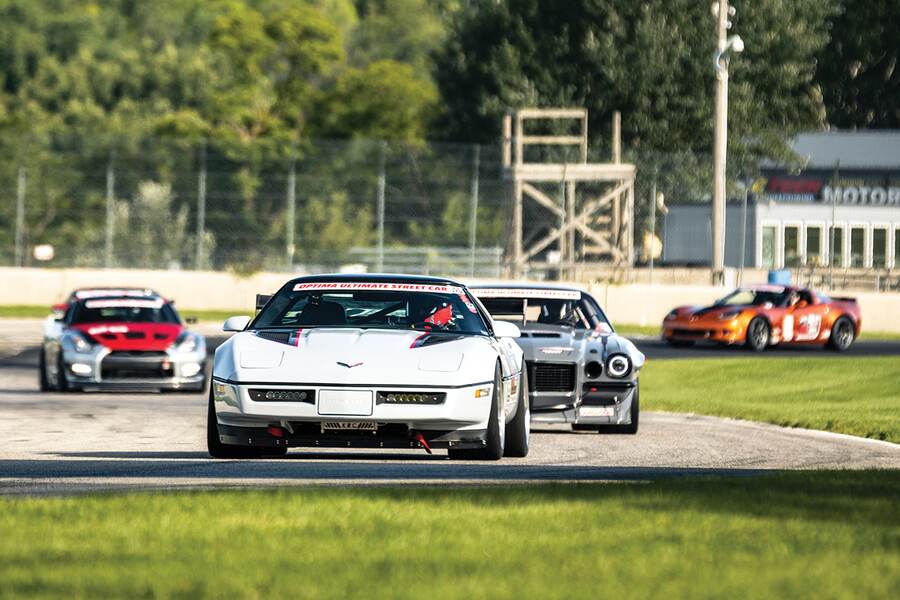 Due to a relative lack of airflow management, “I had some doubts about a C4 without aero treatments,” Koenig admits. “Some cars could lose him in the corners, but then he could almost rear-end them [in the straightaways],” he adds. That’s hardly surprising, as the C4 purportedly scampers through the quarter mile in the mid-nines at more than 140 mph.

Why did Ramey limit himself to a minimum of aero mods? “I hate wings, splitters, and crap like that,” he says. “I wish amateur motorsports would ban them, but they all allow it, and the bottom line is they do work. The car would probably pick up several tenths in an autocross, and several seconds on the road course, with proper front aero, so that is in the works.”

Other salient features of the engine include Wiseco pistons, a Dailey dry-sump system with internal scavengers, and a Motec M150 engine-management computer tuned by Jon Simpson at Simpson Performance. The Kooks headers are actually for a C6 Corvette, but Ramey says he, “cut them a bunch of ways [so he could] get the bellhousing off without pulling the headers.” 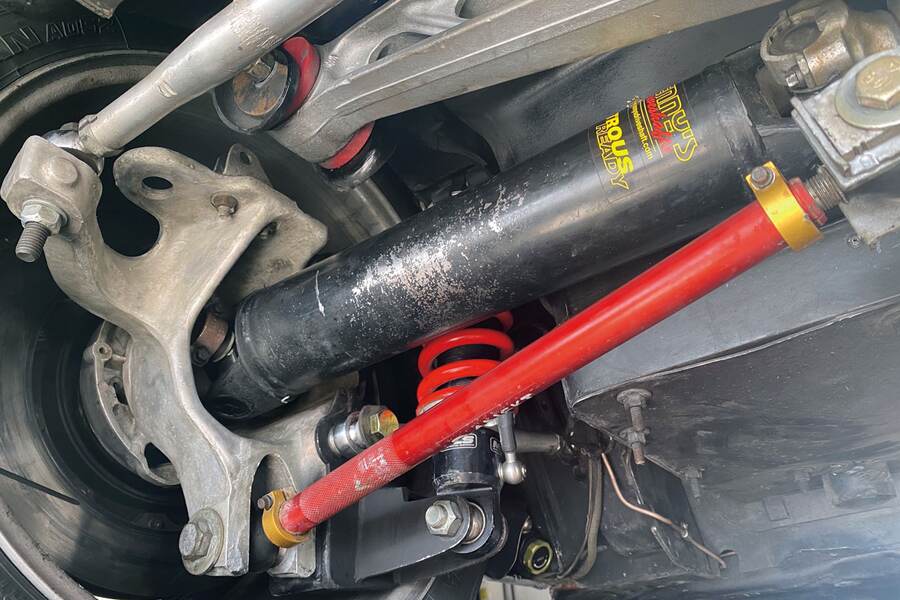 Though most of the factory suspension hardware has been preserved, aftermarket springs and remote-reservoir shocks stand in for the stock bits.

Backing the engine is an HGT Precision sequential six-speed transmission with a custom, ladder-frame-mounted driveshaft from Randy’s Driveshaft Service in Houston. As for the suspension, it relies on stock ’87 Corvette frame pickups, spindles, and lower control arms, but incorporates special spring perches and Heim mounts for the Hypercoil springs and remote-reservoir Vorshlag shocks. With so much power on tap in the curves, the sway-bar setup (or rather, the lack of it) comes as a surprise.

“I ran out of time to make something for the rear, [but] thought it might not need a rear anyway,” Ramey admits. “Then the big circle-track front bar we fabricated broke and fell off at Pike’s Peak, and the car was better after that! So I just sent [the car] out without any bars the rest of the year.” 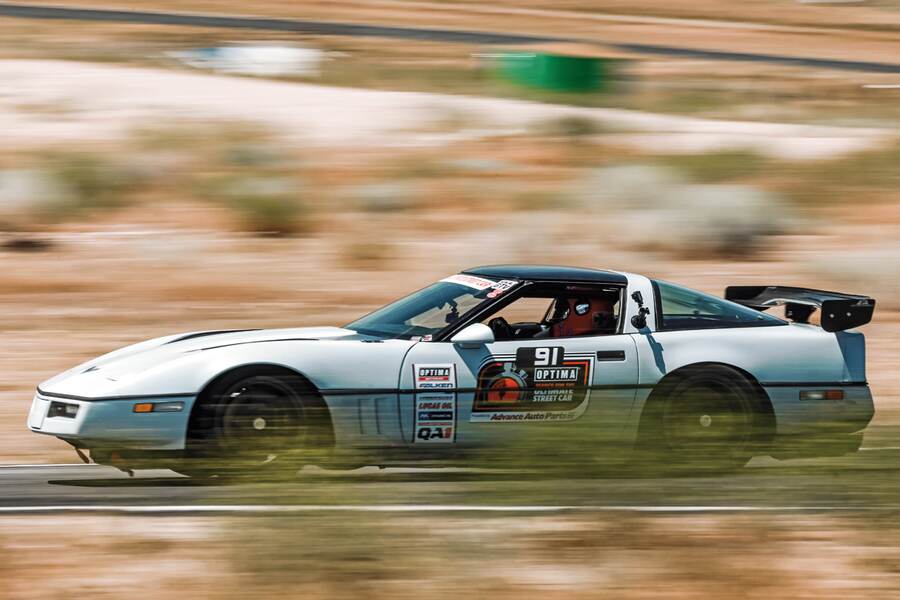 “It also flashes Hell Yeah! if I go over 1.3g,” Ramey notes with a grin. Overall, he says the heavily modded C4 is “clean, unique, [and] state-of-the-art where it counts, yet…easy to service and maintain.”

Despite all these high-tech enhancements, Ramey admits that he has an aversion to working on later Corvettes. “I hate new-car ‘nannies,’ body-control modules, electric door handles, and stupid crap like that,” he says. “I like technology that simplifies and improves life, not tech that complicates it or creates hassles.”

The formidable roster of cars Ramey beat in the Optima Series—“everything from 900-horsepower, full-restomod, carbon-bodied muscle cars to fully modified Lamborghini…Super Trofeo[s],” he says—would appear to lend credence to this back-to-basics philosophy. 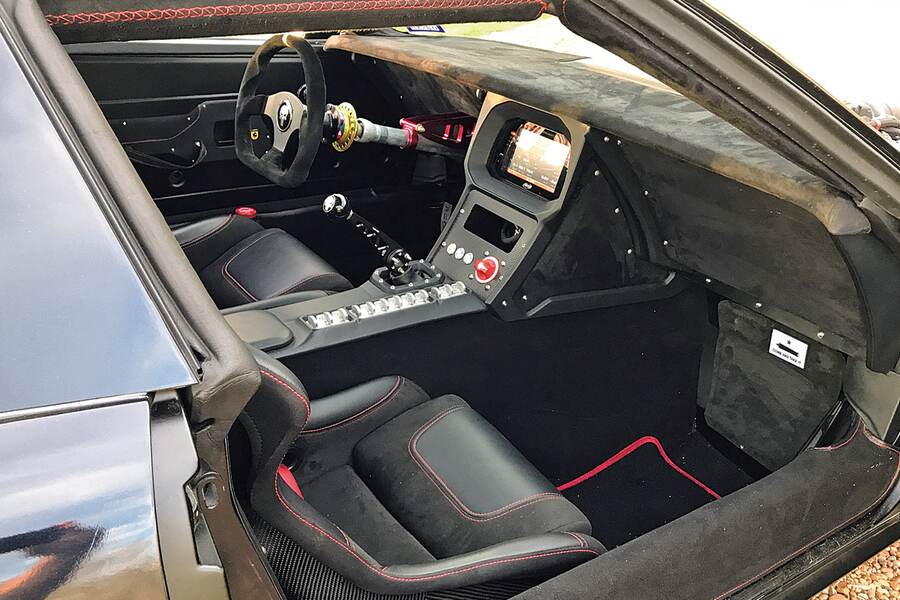 Title-winning speed notwithstanding, Ramey claims that the C4 rides and drives comfortably in more laid-back operating environments. “The only…challenges are the small clutch and big cam, as it’s a pretty rowdy-sounding street car.” Even the race-spec HGT transmission is completely streetable, he notes, and not as loud as most straight-cut-gear units.

That’s not to suggest that the C4’s path to OUSCI victory was without hurdles. Incidents burned into Ramey memory include broken axles, brake failures at Pike’s Peak, tackling turn nine at Willow Springs with “all kinds of problems in the rear suspension,” and “having everything in the car break at Las Vegas and barely pulling it together for the win.”

While Ramey didn’t build originally build his C4 for the Optima series, that’s where it has spent its life so far—and with no regrets. “The Optima series runs iconic racetracks around America,” he says. “The events have so many components—drag race/speed stop, autocross, road race, car show, and even a cruise—usually to a party at some unique place near the track. The whole thing is crazy, epic, memorable, and fun, all at the same time.”

What were the biggest highlights from his championship run? “The friends I made building and racing the car, and, of course, that moment when I realized I had actually won—and it officially became ‘the baddest street car on the planet’ for 2020.” 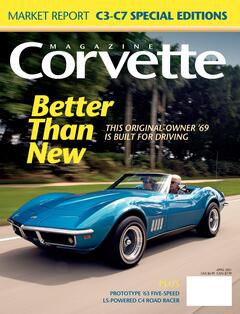