Determination, smart sleuthing, and a bit of luck combined to reveal this astronaut-owned Corvette’s special history 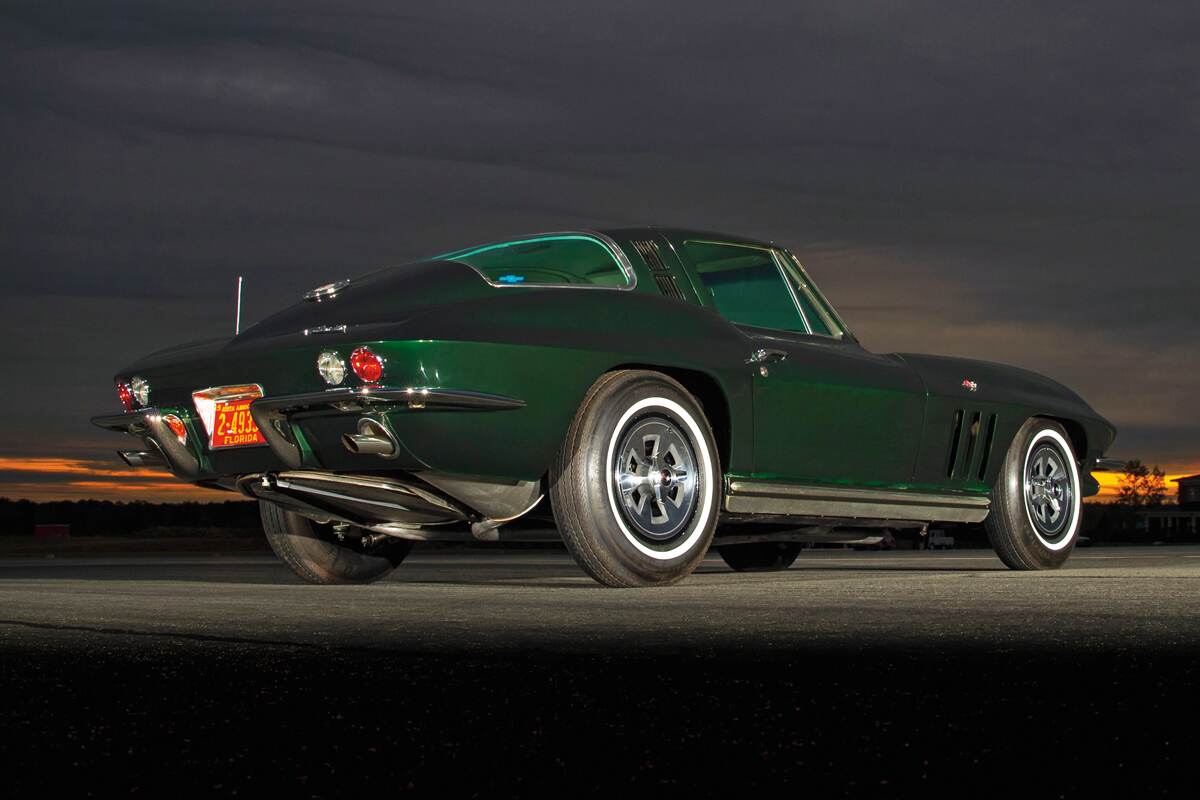 Marc Williams is fortunate to share a love for the old-car restoration hobby with his father, Jerry. “I inherited my love for cars from him,” he explains. “He taught me to appreciate mechanical things, how they were put together, how they work, and how they broke when something failed.

“We’re both Chevrolet guys, and although he has several Corvettes, my dad’s pride and joy is a 1957 Bel Air that he restored and keeps in a replica Gulf gas station that he and I built a couple of years ago.”

Besides the satisfaction that restoration work has brought the younger Williams, it also served a more practical purpose for him. “In 2016, after a 25-year career with the Charlotte [NC] Fire Department, I retired as a captain. Over the years tinkering with my cars gave me an outlet to release the stress that came from many long and sleepless nights on one of Charlotte’s busiest engine companies.” 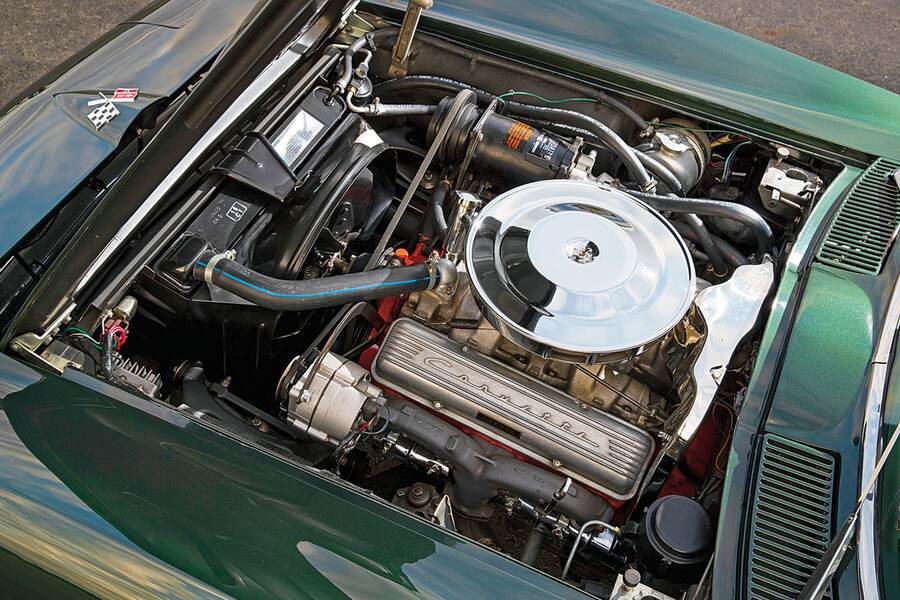 Although the fuel-injected, 375-hp L84 was still available in ’65, Grissom opted for the slightly less powerful L76 instead. The choice makes sense given that this Corvette was to be a Florida car, and the top small-block was not offered with air conditioning.

The first car Williams and his father restored together was a 1966 big-block air-conditioned convertible they bought in 1997. “Calling that car a ‘basket case’ was too kind,” Williams recalls. “My mother thought we had lost our minds when we pulled up to the house with a frame, ‘birdcage’ [structure], and boxes full of parts on a trailer. It was a long process, but with patience and persistence it turned out to be a really nice car and one we are very proud of.”

While restoring the ’66, the pair heard about another promising Midyear that was being offered for sale: a Glen Green ’65 small-block coupe equipped with air conditioning and a dozen other options. The owner had completely disassembled the unusual car for restoration, but got no further than repairing and repainting the body. “We looked at all of the parts and agreed on a price,” recalls Williams, “and then the seller casually mentioned that the car originally belonged to one of the [NASA] astronauts. Not really knowing if this was just a way to sweeten his sale, I sort of let it go. We loaded up the frame and body on a trailer, and put the boxes of parts in the back of two pickup trucks.”

A few days later, while doing an inventory of the parts, Williams came across the car’s AM/FM radio and noticed a strip of old masking tape on top of its housing. Wiping away years of accumulated dust revealed the name “Grissom” written on the tape. The seller’s casual remark about the car’s original owner immediately came to mind, prompting Williams to wonder: Could the name on the radio possibly mean United States Air Force Lieutenant Virgil Ivan “Gus” Grissom, veteran of 100 combat missions during the Korean War and one of the original seven astronauts for NASA’s Project Mercury, America’s first manned spaceflight program? “Now my curiosity was really piqued, and my quest began,” he says. 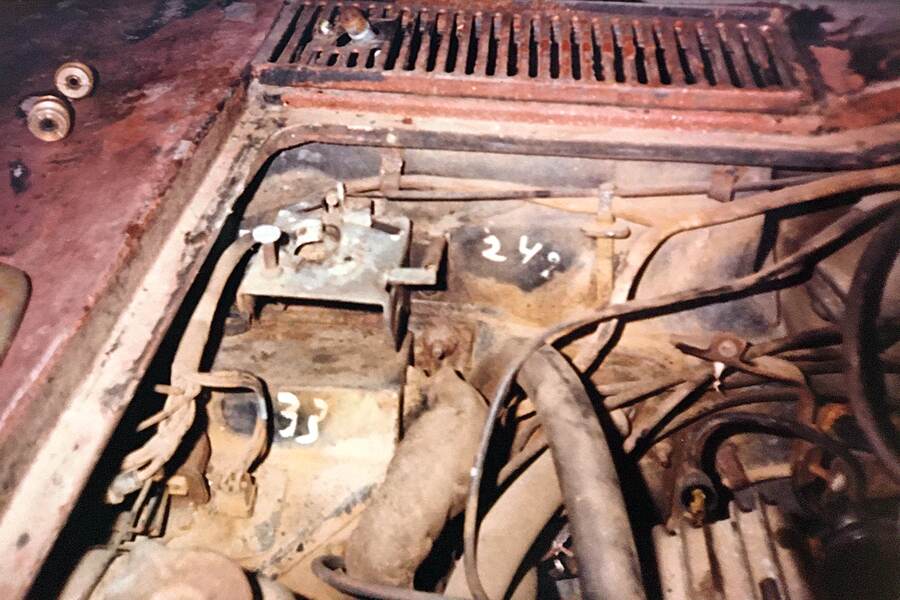 Numbers scrawled on the firewall correspond to the first five digits of the car’s original license plate.

As fervent patriots who adored speed, it was perhaps only natural that America’s astronauts would be attracted to Corvettes. Alan Shepard likely became the first to own one, after buying his father-in-law’s ’53 for $1,500 in 1954. When chosen for the Mercury program five years later, Shepard was driving a ’57 Corvette. And after becoming the first American to travel into space, he was reportedly given a brand-new ’62 model by Chevrolet.

Nineteen-sixty Indy 500 winner Jim Rathmann, who owned a Chevy dealership in Melbourne, Florida, just 25 miles south of Cape Canaveral, recognized the tremendous publicity value of putting astronauts into Chevrolets. Accordingly, he arranged with Chevrolet General Manager Ed Cole for a “sweetheart” lease deal he could offer to any of America’s spacemen. For only $1 per year, they could drive any vehicle the company made. Unsurprisingly, six of the Mercury Seven—including Shepard, Gus Grissom, Gordon Cooper, Deke Slayton, Scott Carpenter, and Wally Schirra—took advantage of the offer and leased Corvettes. All but Schirra and Carpenter continued driving the top-performing Chevy model in the years that followed.

Williams visited with Jim Rathmann at his Melbourne dealership in 2000, and while he was fascinated with what the racer-dealer had to say about the astronaut lease program, he was disappointed to learn that the dealership had not retained any paperwork for Grissom’s ’65 Vette. Rathmann did, however, provide him with contact information for Scott Grissom, the astronaut’s oldest son, to whom the Indy winner had recently sold a new ’01 Z06. 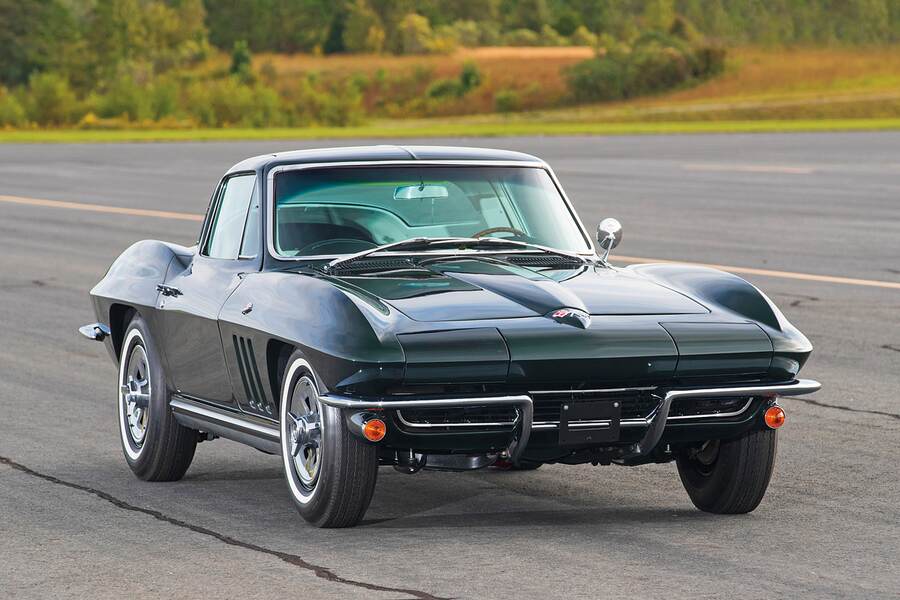 “I called Scott and he remembered, with great clarity, all five Corvettes his father had, ranging from a 1963 fuel-injected convertible to a 1967 big-block convertible. [He] remembered every detail about the 1965 coupe, right down to its 3.55:1 rear axle ratio. His father’s prior Corvettes were fuel-injected, but in 1965 he got a carbureted 327/365 because it was the highest-horsepower engine that could be ordered with air-conditioning.”

Shortly after Williams spoke with Scott Grissom, the National Corvette Restorers Society began offering original-dealer information for vintage Corvettes. Through this resource he learned that his ’65 was, in fact, delivered new to Rathmann Chevrolet.

Further evidence that this was Grissom’s Corvette came from something written on the car itself. The prior owner of the ’65 took many photos of it during the disassembly process. Among them was a photo of the firewall showing the numbers 249 and 33 scrawled with white paint. At first, Williams couldn’t figure out what the numbers meant, but during an evening of Internet sleuthing he came across an intriguing clue. 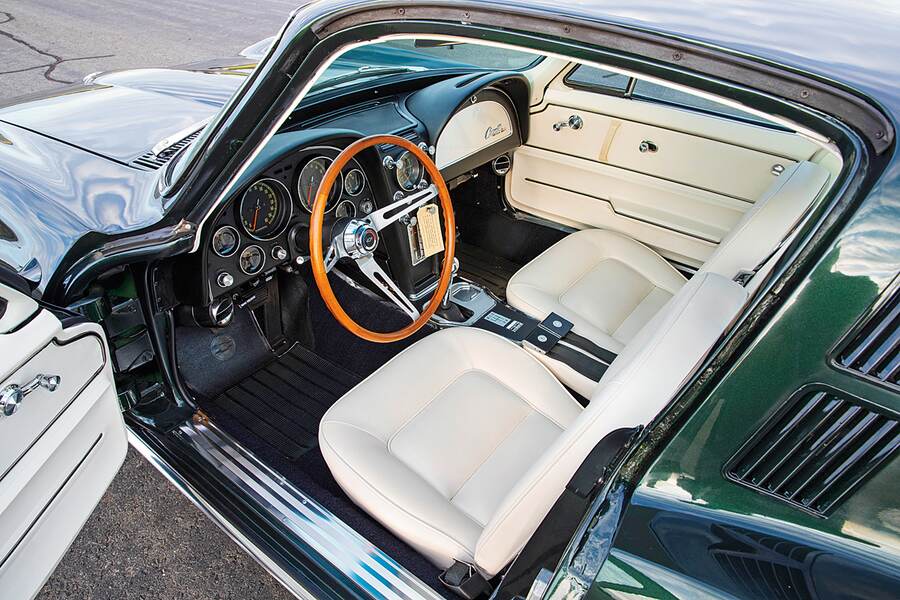 White was one of four available interior colors for 1965.

In 1965 a German news crew produced a documentary that showed several of the astronauts pulling into NASA’s Houston Manned Spacecraft Center (renamed the Lyndon B. Johnson Space Center in 1973) in their Corvettes. The film also included footage of the astronauts at home, including one sequence showing Grissom’s ’65 coupe sitting in his driveway. A frame-by-frame analysis revealed that this car carried a Florida license plate bearing the sequence 2-49333, which is very similar to the numbers written on the firewall of Williams’ car. The number 249 is also seen on a strip of tape affixed to the car’s windshield in a photo showing Grissom sitting in the driver’s seat. Finally, the first number on the tag indicated that the car was registered in Duval County—not where Grissom lived, but rather where GM had a zone office.

“At that point I had a radio with Gus Grissom’s name on it, NCRS paperwork showing the car was delivered through Rathmann Chevrolet, photos of Gus Grissom in his Glen Green ’65 coupe, the information from Scott Grissom, and the matching numbers on the windshield, firewall, and Florida tag. The evidence was mounting, but I wanted more. Then I remembered that the man we bought the car from gave me a list of some prior owners, going back to 1967, when it was in Huntsville, Alabama, so I figured I’d make a few phone calls.”

The first prior owner Williams attempted to call was Dickie Sledge. Sledge’s wife answered the phone and told him that her husband had passed away a few months earlier, but suggested that perhaps she could help. When Williams said he had some questions about a Corvette that Sledge had owned, she asked which one. “I told her it was a Glen Green 1965 coupe, and she immediately said, ‘Oh, you mean Gus Grissom’s car!’ I received the same unprompted response from two other previous owners, Jimmy Golden and Alton McCaleb.” 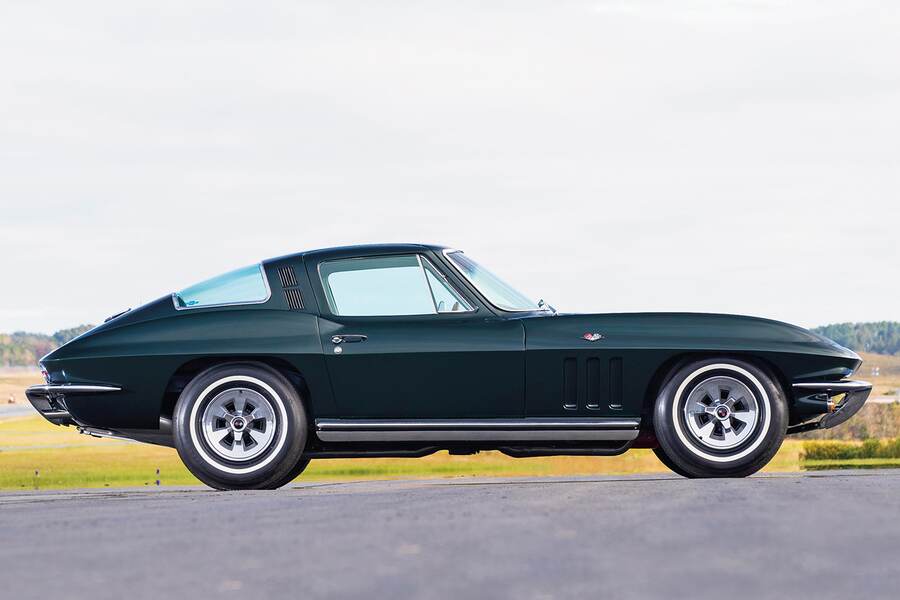 Beginning in July 2004, concurrent with researching its history, Williams began restoring the ’65 coupe. Though the body was painted, everything else needed to be done. Working on nights and weekends he methodically rebuilt, refinished, and reassembled all of the parts. “Most of my spare time and …money were put into this car,” he says. “It became a part of my life. As the restoration continued, I would periodically ask my dad to sell me the car, but each time he said, ‘Nope, I’m not ready…yet.’”

By the close of 2007, Williams had completed approximately 80 percent of the restoration. He took the final few days of the year off and, in keeping with tradition, joined the rest of the Williams family for a gathering on Christmas Eve. “This is a big night for us,” he says, “with all of the brothers, sisters, cousins, nieces, and nephews getting together at my parents’ house. Mom and Dad have always made Christmas great, but what happened that [year] topped them all.

“As the presents were passed out, I received an envelope that simply said ‘Marc’ on the outside. I opened it, and inside was written, ‘Your gift! 1 – 1965 Green Corvette, Santa and Mrs. Claus.’ Even today, many years later, I am speechless about this.” 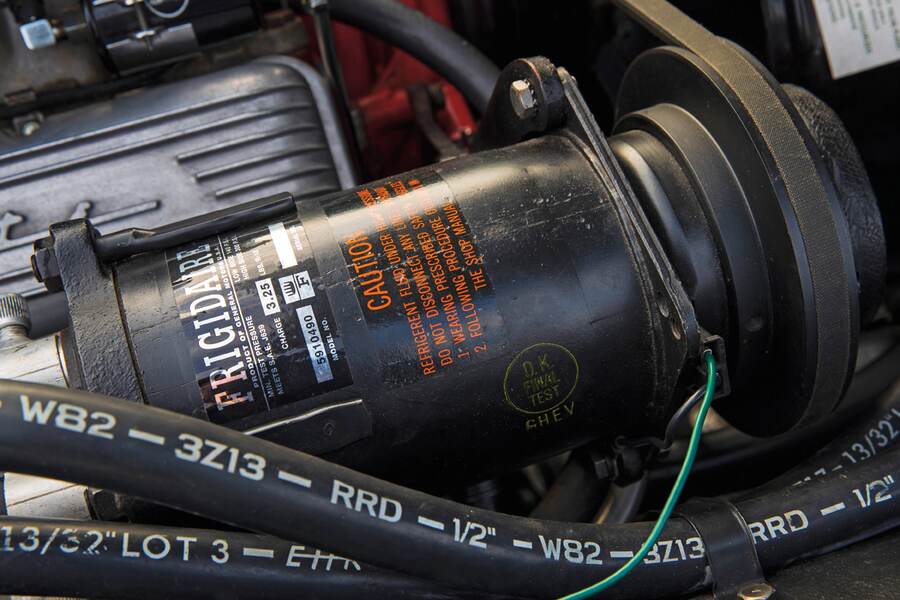 In August 2011 Williams finally completed the Corvette’s restoration. These days he thoroughly enjoys driving and showing it, and he understandably calls it his favorite. “I love this car and no amount of money can every persuade me to sell it. My family and friends were extremely patient and supportive during the many years of restoration, and I would like to especially thank my parents, wife, daughters, [and] cousin…and previous owners Sandra Sledge, Jimmy Golden, Alton McCaleb, and Ken Maidment for sharing their stories about the car.” 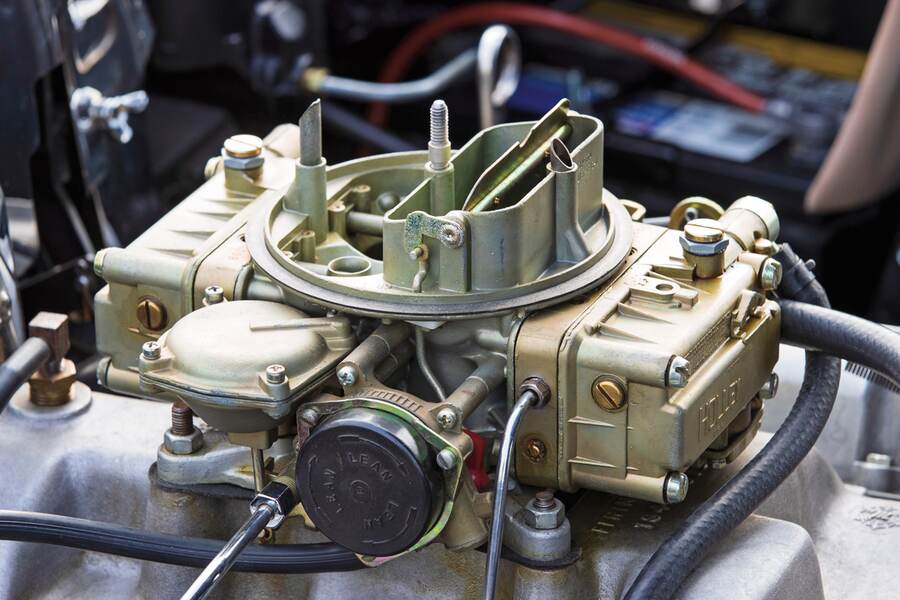 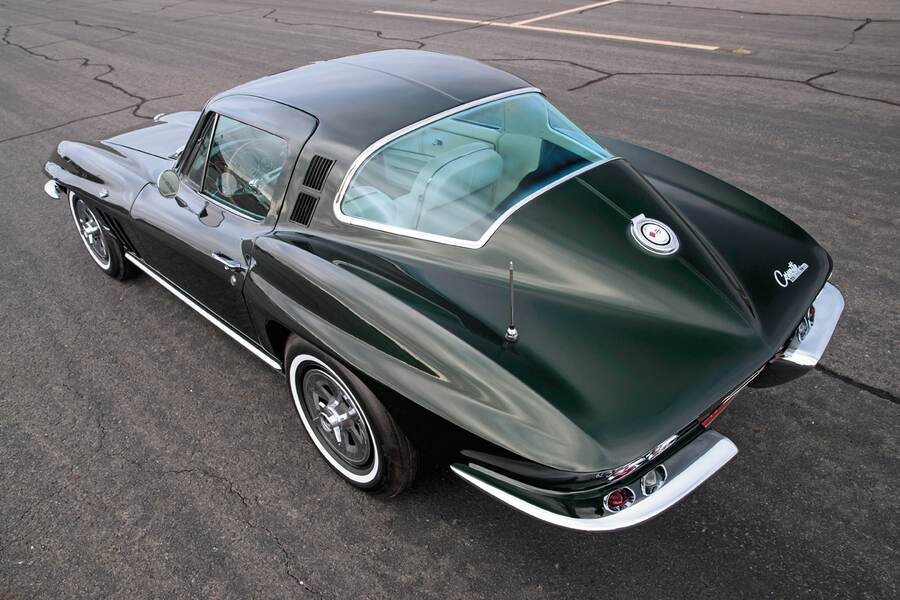 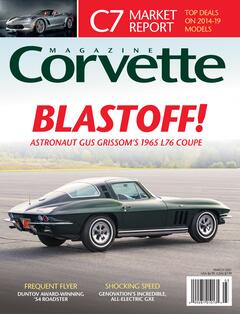