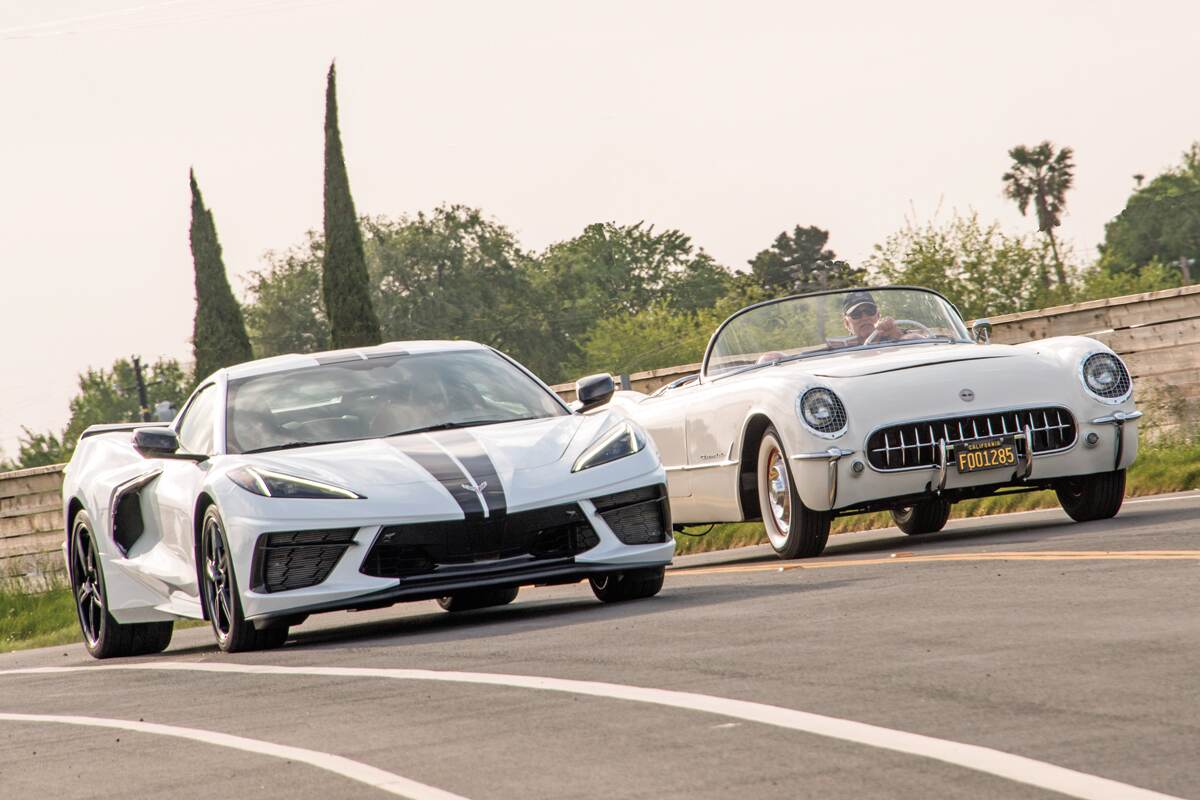 How many changes to the Corvette took place between 1953 and 2020? Over the course of 67 years—literally a lifetime for the brand—the permutations are too numerous to recount. The basic premise of this story, then, is to study the contrasts between the bookends of Corvette production, from the car’s meager beginnings in the early ’50s as a tepid, Blue Flame–powered cruiser to today’s torrid, mid-engine cruise missile.

Our June 2020 issue has already covered the new C8 in exacting detail, everything from your editor’s colorful driving impressions on Spring Mountain’s track to additional tech features on the chassis and engine. So no point in rehashing those aspects.

But when we came across Larry and Debi Smith, who happen to own both a ’53 roadster and a ’20 coupe (with the same VIN, by the way, which we’ll explain anon), we seized on the unique opportunity to see just how far Corvettes have advanced. Enhancing the Smiths’ perspectives, they’ve also owned more than a dozen other Corvettes in previous years.

All of which brings to mind the maxim known as “Six Degrees of Separation,” which posits that no one is more than six relationships away from any other person in the world. In terms of Corvettes, the aphorism goes one better, counting forward seven eras from the C1 to the C8 iteration.

At first glance of the two cars together, you’d hardly think we’re talking about the same marque. Indeed, as Larry points out, “People [often] ask about the ’53, ‘Is that a Corvette?’” 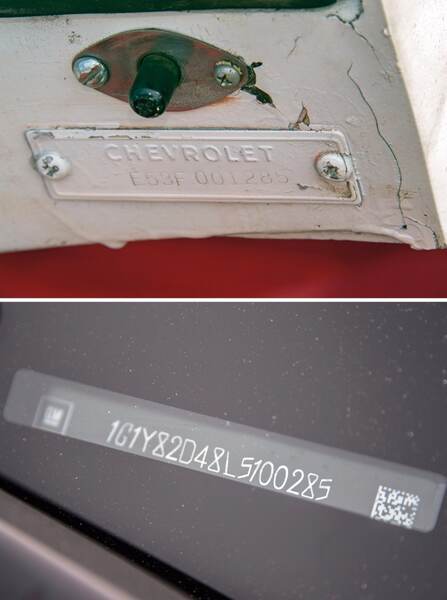 About the only similarity shared by them is in the color scheme, white with red interior, (though the C1’s Polo White paint has a warmer, ivory hue, while the C8’s is a snowy Arctic White). In marked contrast to the bulbous nose of the C1, the C8 features a sharp leading edge punctuated by numerous vents, all of which are instrumental to cooling the various mechanical components.

Overall, the fierce stance and sharp lines of the C8 give it the look of a menacing scimitar, while the C1 has a jaunty air to it, a sweet creampuff on wheels. Those skinny whitewalls seem to barely touch the pavement. (No surprise that Zora Arkus-Duntov referred to the car as a “wiggle wagon.”) Even so, they feel just right for the C1.

Looking closer at the body panels, the gaps on the C1 are wide enough to push an apricot through, while the fitment on the C8’s is precise and nearly impeccable. On some areas of the C1’s finish, the weave of the cloth shows through, since fiberglass was a new material for the time. Only 300 units were made in total, so they were basically all handmade pilot cars. The toothy grille was actually a completely custom affair, as no two parts are exactly the same.

When we take the car for a spin, the seats offer spongy support at best, and bottom out even on mild bumps in the road. The slushy two-speed Powerglide slush-box shifts as crisply as a moist Ritz cracker. First gear is low, and Second is 1:1, so the throttle response is desultory, sometimes referred to as “grunt and groan.”

As for the brakes, the single-cylinder master looks really undersized. It’s a miracle the car—essentially a sporty-looking body draped over a ’53 Chevy sedan platform—even stopped with those drums. On the C8, the Brembo discs clench like a pit bull on a T-bone. 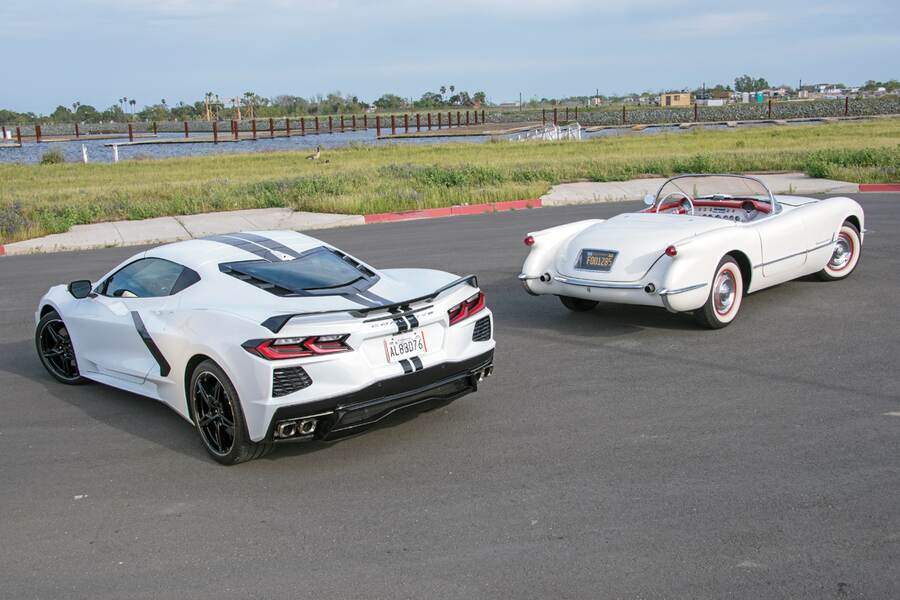 Despite snarky remarks by owners of V-8 Corvettes, the original Vette’s 235-cubic-inch inline-six was actually pretty much state-of-the-art back in the day, with an overhead-cam layout invented by David Dunbar Buick, founder of Buick Motors. And looking at the engine in historical context, its 150-horsepower output wasn’t all that much less than the 165-hp rating of the ’75 model’s L48 V-8.

Nevertheless, any comparison to the LT2 in today’s Vette amounts to something approaching cruel and unusual punishment. The C8’s powerplant goads a ferocious 495 horses out of a car that weighs 3,647 pounds. Even though the C1 tips the scales at a comparatively feathery 2,886 pounds, the power-to-weight ratios come out to around 19 pounds per horsepower for the ’53, versus a mere seven pounds for the ’20 edition.

Mechanics familiar with the Blue Flame Six know that its side-draft carbs are prone to leaking, which Larry Smith fixed by installing a pressure-restriction valve. (One restorer of a ’53 model actually shimmed the engine up on the opposite side of the carbs, so in effect they became down-draft carbs instead.)

In addition, Smith improved the buckboard ride by changing from ball joints to Timken tapered units for the antiquated kingpin front suspension. He also swapped out the bias-belted tires to OEM-sized Cooper radials from Calli Tire & Wheel.

“It was a great improvement in handling and ride,” Smith notes. “I also changed the original shocks to gas right afterward, and that made another improvement. With all three upgrades working together, it’s smooth and responsive at 75 [mph] down the freeway. Bad thing [is], it’s not original that way, but I saved everything in case someday I want to put it all back stock.” 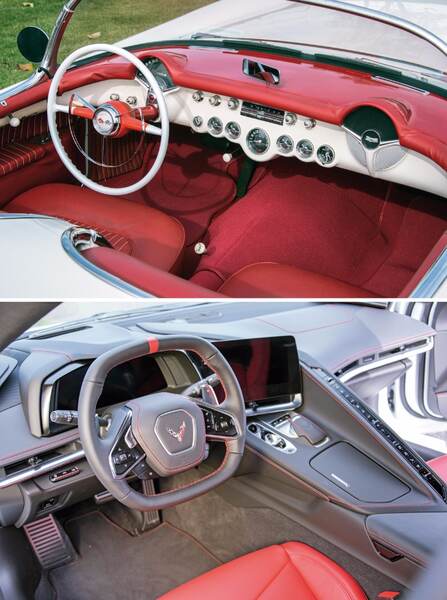 In sum, even with all its quirks, the C1 is nonetheless an endearing ride, with a certain charm and nostalgia that touch your heart. It’s easy to understand why Smith has a special regard for it out of all his Corvettes over the years.

“The ’53 has always been my favorite,” he smiles. “It [is] an American icon—the one that started it all.”

Smith purchased the car—which happens to be chassis #285—some 25 years ago from longtime family friend Don Fairclough, who in turn bought it from the original owner for $800 in 1963.

Speaking of pricing, even with its remarkable advances in technology, the latest mid-engine Corvette still costs significantly less than a nicely restored C1. According to the Monroney sticker, the base price of Smith’s new ride was slightly less than $60K, but with all the options, it sold for just under $90K. Besides the Z51 Performance Package and premium infotainment package, Smith also checked items such as the heavy-duty cooling system and Magnetic Ride Control suspension. Purely for looks, he also went with Carbon Flash dual racing stripes and an engine appearance package, among many other goodies.

Getting back to the previous owner history of the C1, it was actually Fairclough’s second family vehicle. Nonetheless, he used it regularly for commuting to work, grocery shopping, and even taking his kids to school. But after a time the car fell into a state of disrepair and was parked in the garage in the 1970s. 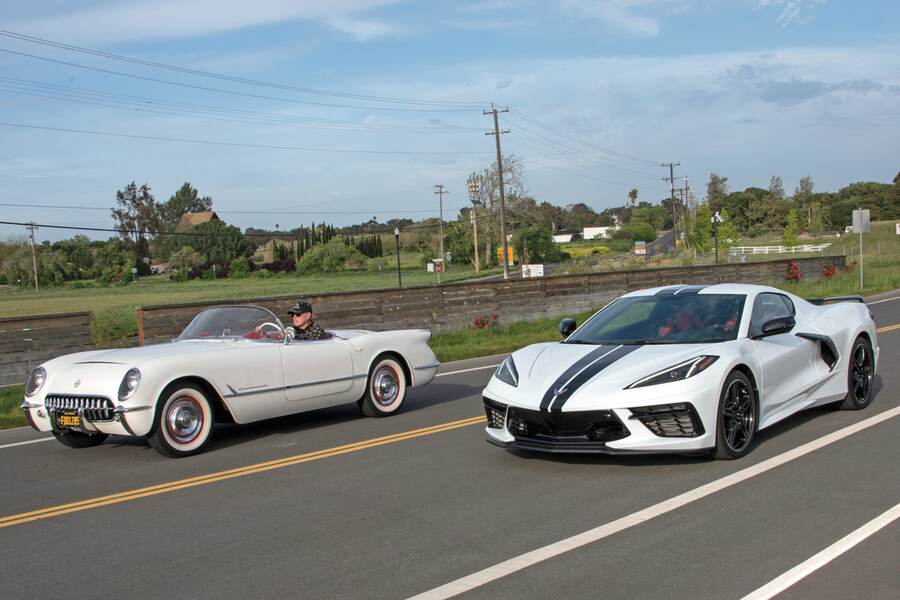 “Even then, not running, it was Don’s pride and joy,” Smith relates. “He was always ready to take the cover off of it…and show it off.”

Once Smith took ownership, the Corvette started to regain its previous luster. “The car has been under some restoration the entire time I have owned it, although not to NCRS specifications,” he admits. “I have retained as many original items as possible, including some body parts that have original paint.

“We have maintained the car to drive, but are always on the lookout for NOS items.” Some of the latter finds have included the inside rearview mirror, horn ring, bumpers, and a few grille teeth.

Smith did all of the work on the ’53, from removing the body to refurbishing the chassis, plus painting and rebuilding the engine and transmission. The car now has just under 94,000 miles on it and is in fine operating shape.

“The best memory of the ’53 was when Debi and I really decided to drive it ‘off the island’ [in the California Delta region] for the first time,” he recalls. “I don’t carry tools because of bad Karma, so off we went, and the car never missed a beat the whole drive. It still runs like a top now.” 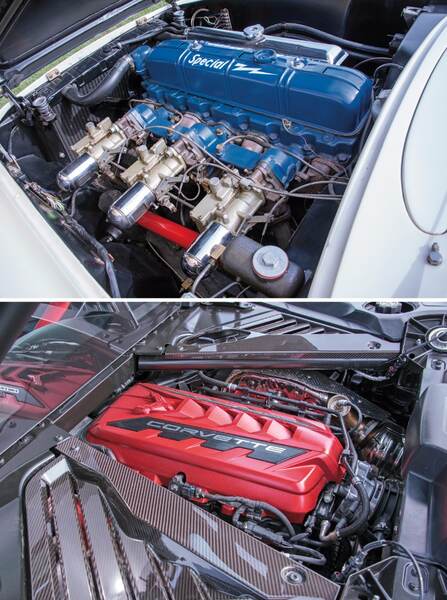 But one alarming incident did occur when the couple was coming home from a Corvette show at the Blackhawk Museum in Danville, California. A taillight socket shorted out, and the harness started to catch fire under the dash while the car was stopped at a red light. Larry ran the stoplight so he could get out of traffic, then ripped loose the smoldering harness to prevent a full-blown fire.

“We drove the car home without any lights whatsoever. Thank goodness it was summertime and stayed light enough out.”

One of the more surprising aspects of this duo of Corvettes is how Smith managed to get the last three digits of the cars’ VINs to match.

“I was given a lead that Harlan Charles, the Corvette Product Manager, might be worth a try,” he relates. “We [told] him that we were diehard Corvette lovers who…wanted to get the 285th first-year, mid-engine car to match our first-year, front-engine Corvette #285.

“I think what convinced [him] was…our longtime involvement with promoting vintage Corvettes. We try and get the 1953 to as many Corvette functions as possible. The old [ones] are ignored, in my opinion.”

Once Charles agreed to the Smiths’ request, they were put on the official customer-selected-VIN list. Of course, there were delays before the Smiths received their 2020 Corvette—first the UAW strike, then finishing up 2019 orders, and then the assembly-line changeover to the new model. Those holdups were followed by the usual production of a captured test fleet, plus a two-week UAW holiday, and finally a quality hold on all 2020 production cars to make sure they were perfect. (Whew!)

Finally, production started on February 03, 2020, and the Smiths’ C8 was built during that first week. Once it arrived, the excitement began.

“When we first got the 2020, we drove it to the local auto-parts store to purchase some cleaning supplies,” Larry says. “Since all ‘car guys’ work there, they closed and locked the doors so the entire staff could come out and see the new C8.”

Even more reactions ensued when Larry and Debi took the car to have some paint-protection film installed. They were followed to the detail shop by two local police cars and several other drivers who wanted an up-close look at the latest Corvette.

Stepping back and looking at the two eras of Corvettes together, “There isn’t any way to compare the cars, except they are the two icons of Corvette history—at the time of production, the best possible sports car GM could produce,” Larry notes. The most common expression from people seeing them together? “Amazing.” Especially upon seeing that they have matching VINs. “Both being #285 was our goal,” he says. “There’s a vast difference in the cars, yet both are the same.” 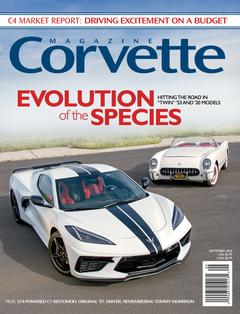