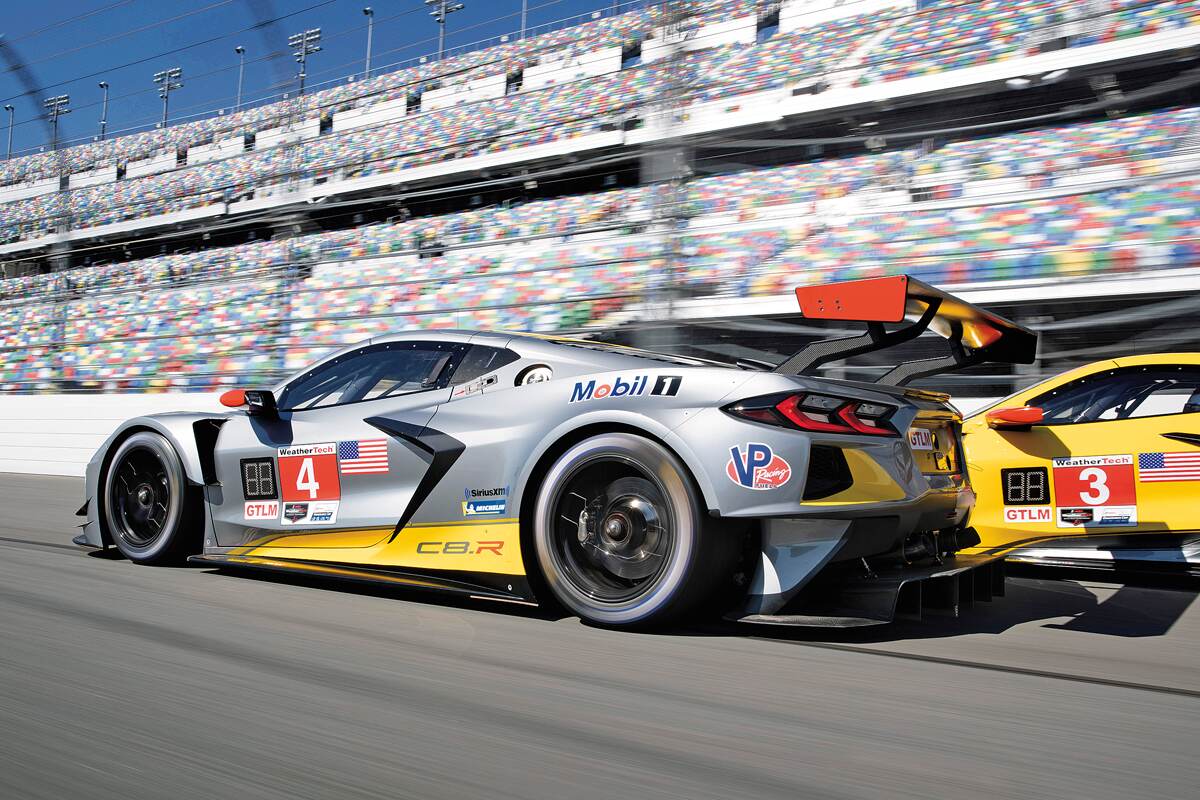 One of the most important determinants of a racecar’s success is its aerodynamic performance. Indeed, aero characteristics profoundly impact every area of a vehicle’s operation, including top speed, cornering speed, braking capability, tire wear, overall stability, and fuel economy.

Though we talk about hyper-efficient body designs “cheating the wind,” this is not really possible given the immutable laws of physics. Instead, the best engineers can hope to do is beat the wind at its own game by managing airflow effectively and harnessing its incredible power wherever possible. In the case of a racecar, they have to do this within the rules governing the class in which the car runs. And that is exactly what Corvette Racing’s design engineers strove to do with the new C8.R.

In designing the C8.R, engineers worked to maximize downforce and minimize drag, while achieving the best possible balance of these factors at all speeds. They also needed to divert enough air to provide sufficient cooling capacity for the engine, transmission, brakes, air-conditioning condenser, and other mechanical and electrical components throughout the car. 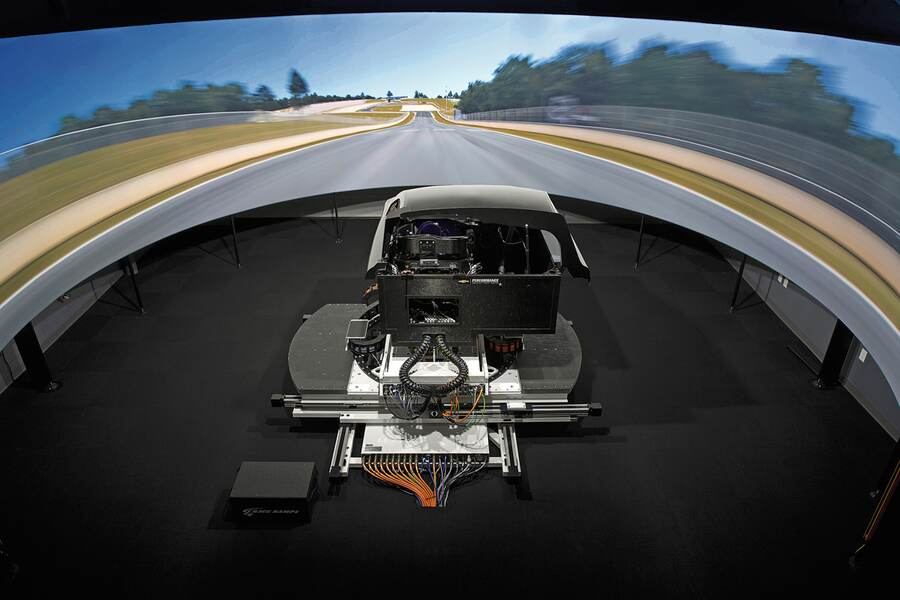 This highly sophisticated simulator enables engineers to run virtual analyses of the car in any configuration, on any of the racetracks where it will compete. An interior based on the C8.R’s actual cockpit contributes to the fidelity of the experience.

One of the most challenging aspects of optimizing aerodynamics is the fact that some of these design objectives are at odds with one another. For example, while it’s desirable to both reduce drag and increase downforce, achieving the latter tends to exert an unwanted influence on the former. Over time, engineers have found innovative ways to advance desirable characteristics while minimizing the negative byproducts.

Aero testing began long before the first component for Chevy’s C8.R development car was manufactured, inside intensely powerful computers directed by equally powerful programs using numerical analysis and data structures. Computational Fluid Dynamics (CFD) is the branch of computer-aided engineering that allows for this. CFD analyzes fluid flow in accordance with its velocity, pressure, temperature, viscosity, and other physical properties, using extremely sophisticated mathematical equations. CFD analysis was applied to the Corvette racecar’s individual components and sub-assemblies, in addition to the car in its entirety.

Another sophisticated tool used to evaluate aerodynamics before the construction phase was Chevrolet’s state-of-the-art driver-in-the-loop (DiL) simulator. As the name implies, this is a simulator that allows the driver to virtually “drive” the car on the same tracks where it will actually race. 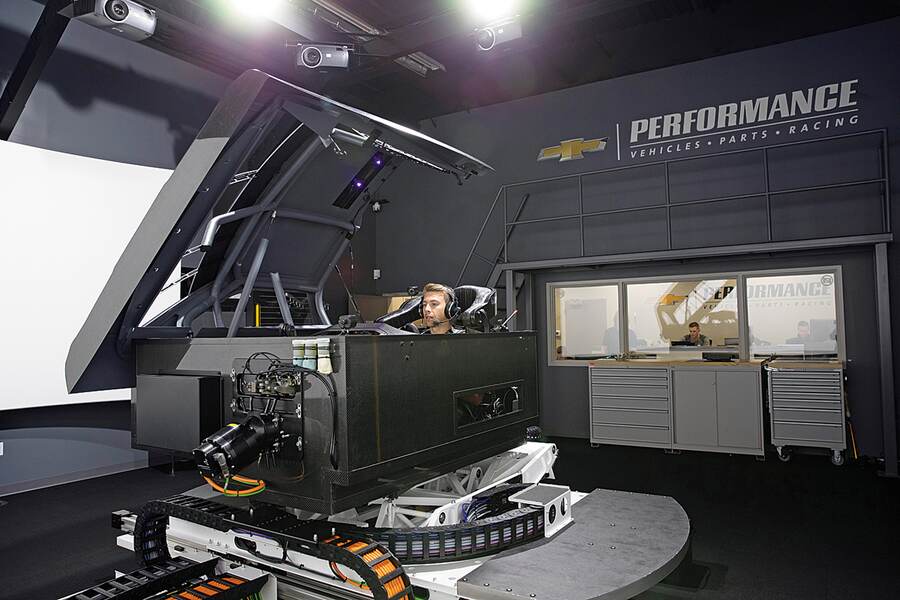 C8.R pilot Tommy Milner makes a lap around Road Atlanta in the DiL.

“This is the first time we’ve been able to drive a racecar before it existed…in real life,” explains Corvette Racing pilot Tommy Milner. “[With the C8.R] we could drive iterations of it based on theories and what engineers thought would work. That, for me, was an entirely new experience. Being a part of that has been the most fun part of the entire process.

After narrowing down the design of all critical aerodynamic components using computer modeling and DiL simulations, physical testing got underway. This process was dramatically accelerated by the team’s ability to produce 3D-printed rapid-prototype parts for evaluation. As always, the analysis of parts, assemblies, and, ultimately, the entire car was done both in the wind tunnel and at various tracks around the country. 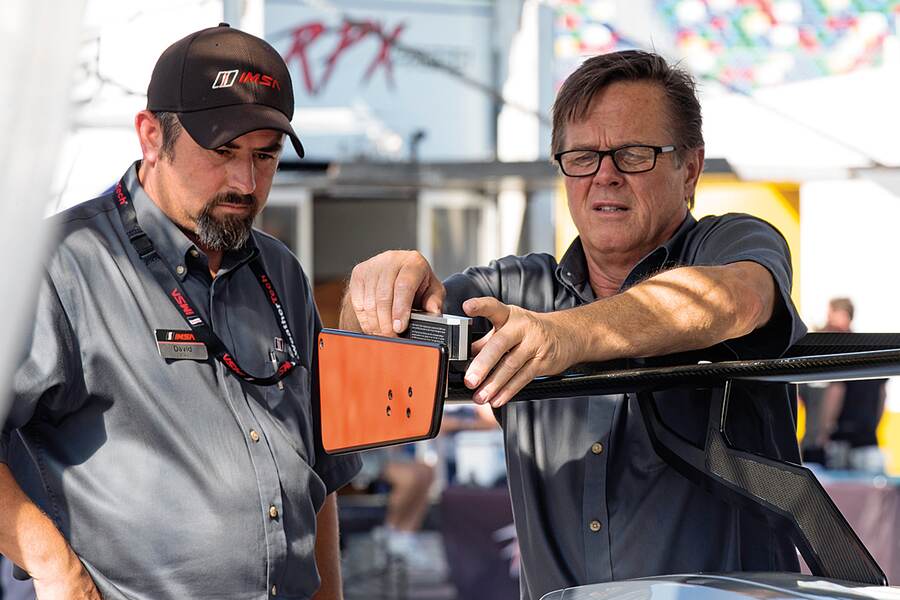 Though Corvette Racing’s engineers benefited immensely from the knowledge base built up over the program’s first quarter century, the eighth-generation Corvette’s mid-engine architecture dramatically changed some of the aerodynamic considerations. Relocating the engine opened up a lot of space in the front, which allowed the designers to improve the front diffuser and its surrounding support structures. At the other end of the car, a more compact gearbox, designed by technical partner Xtrac specifically for the C8.R, freed up more room for the rear diffuser.

Besides optimizing the front and rear diffusers, it’s crucial to achieve a precise balance between the front and rear of the car. With a clean-sheet design, it’s relatively easy to generate tremendous downforce at the front, where the car is moving through clean air. The same cannot be said of the rear, however, because that area never experiences the same volume or quality of airflow. By carefully sculpting the car’s under-floor and intelligently managing the flow of air used for engine induction and cooling, engineers were able to get more air to the rear wing and rear diffuser with the new car, yielding higher downforce with the front and rear precisely balanced.

Since FIA GTE and IMSA GTLM rules allow considerable freedom when it comes to controlling airflow to feed the engine and cool the car’s various components, Corvette Racing’s design engineers were able to find very efficient ways to meet these needs. While production C8 Corvettes take in engine air through the body’s side scoops, the C8.R engine intake is a forward-facing scoop at the base of the rear window. This scoop partially blocks the driver’s natural rear sightline, which is the main reason it isn’t used on the street car. As a workaround, the racecar relies entirely on a rear-facing camera for a view of what’s going on out back. The C8.R’s engine-induction scoop thus gets an uninterrupted stream of cool, high-speed air without significantly affecting the airflow above it, a critical factor in ensuring the rear wing’s effectiveness. 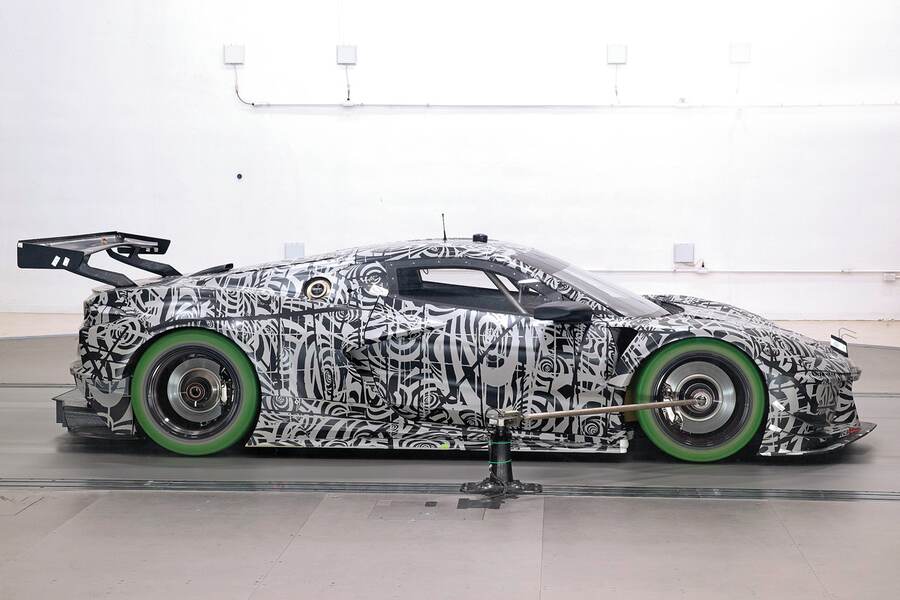 In this image, a prototype undergoes testing in a “moving ground plane” wind tunnel. This approach, which places the vehicle on a rolling steel belt, allows for simulated speeds of up to 180 mph. The boom attached to the front wheel is one of two anchor points securing the car.

Ingesting engine air via this method also frees up the side scoops to deliver cooling air elsewhere, including to the engine and gearbox. With prior, front-engine Corvette racecars, the separation between the engine up front and the transaxle at the rear made it easier to manage their respective thermal loads. But with the two assemblies adjacent to one another, the challenge of keeping both cool is increased considerably.

With the C7.R and earlier cars, a lot of ancillary components, such as the air-conditioning compressor, alternators, and starters, were cooled passively, which is to say they were cooled by the air that happened to be circulating around them. With these parts all clustered together with the powertrain, the C8.R team had to incorporate heat shielding and active cooling, which includes ducting air streams brought in through the side scoops to where they are most needed.

The engine’s radiator is located in the front of the C8.R, in the production car’s storage area. Air is ingested through the centrally mounted grille, passed through the radiator, and then exhausted through four ducts—two on the hood at the base of the windshield and one positioned behind each front wheel. This is a very efficient way to take heat out of the engine’s coolant that was not feasible with the front-engine Corvettes, which lacked sufficient space to channel the air out through the sides. With these older cars, air passed through the radiator and was extracted via one large duct in the hood, which complicated the management of much-needed airflow over the body and back to the rear wing. 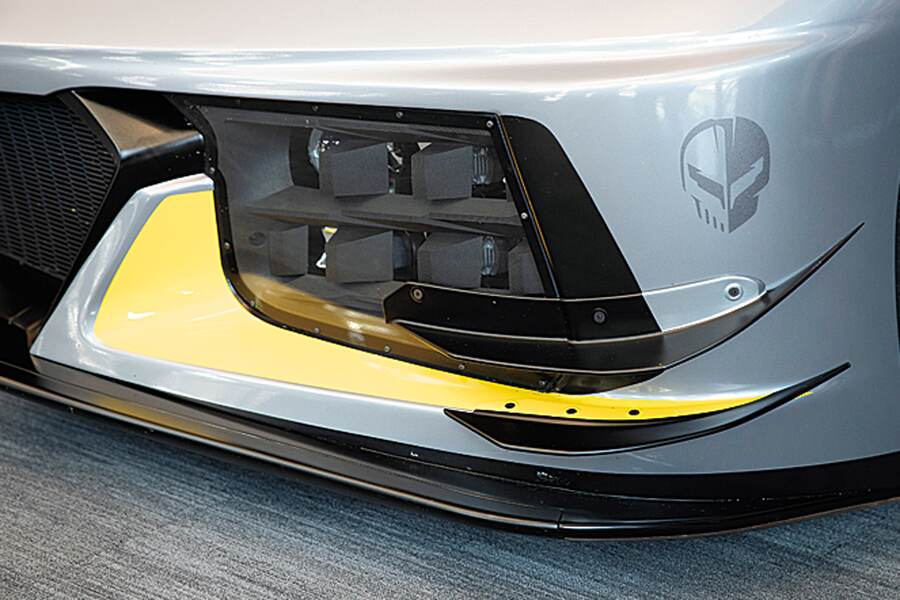 “The size of each duct exhausting air that has passed through the radiator has been balanced to meet the aero requirements of the car,” explains Corvette Racing Program Manager Ben Johnson. “It represents a fairly novel concept from the aero team to capitalize on the architecture of the car.”

By the fall of 2019, when the new car’s homologation was finalized, its major aero considerations were locked in place. All of the hard work put in by the team over more than two years of design, development, and testing yielded a new-generation Corvette racer that substantially outperforms what came before, due in large measure to its improved aerodynamic characteristics.

Because IMSA and the FIA/ACO utilize Balance of Performance adjustments to control the performance of all competing racecars, the C8.Rs will not go around any track dramatically faster than did the C7.Rs. But the improved aero will make itself felt in other ways. Better aerodynamics means the cars will be more fuel efficient, have greater tire longevity, and will perform more consistently over the entire duration of each stint. The improved aerodynamics also will enable the team to respond more efficiently to different ambient factors and track conditions. Taken together, advances in the C8.R’s aerodynamics will play a crucial role in the new cars’ success this year and beyond. m 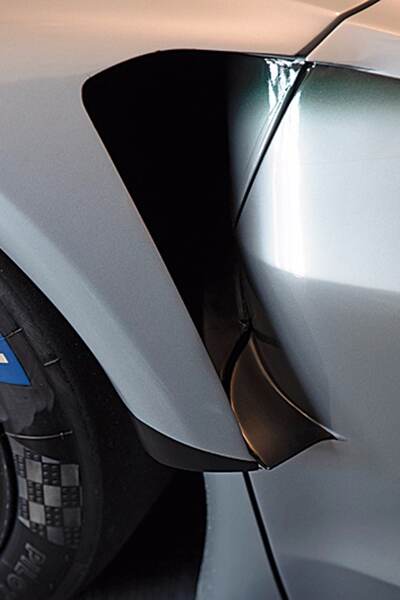 Outlets behind each front wheel exhaust some of the air that passes through the front-mounted engine radiator. 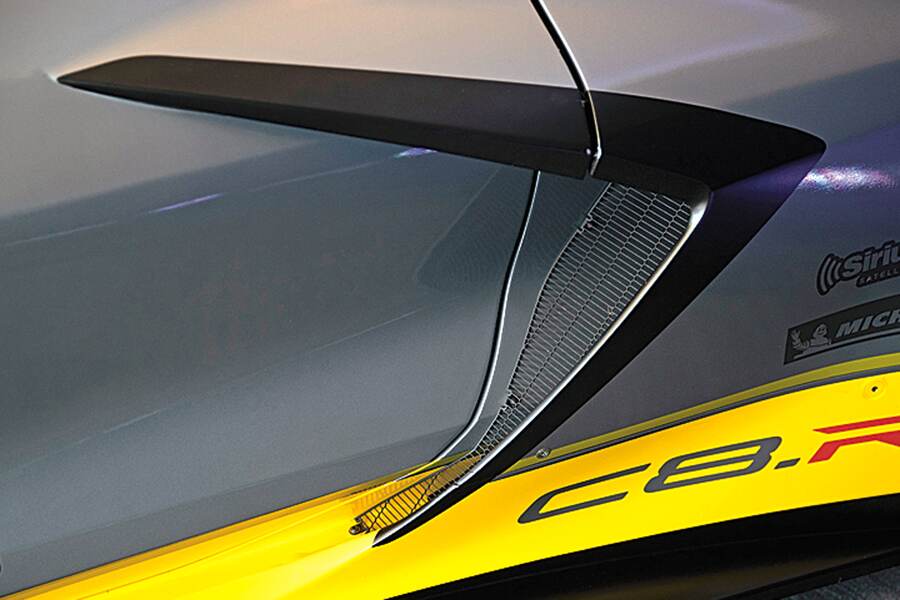 Side scoops ingest cooling air for rear components such as the powertrain and brakes. 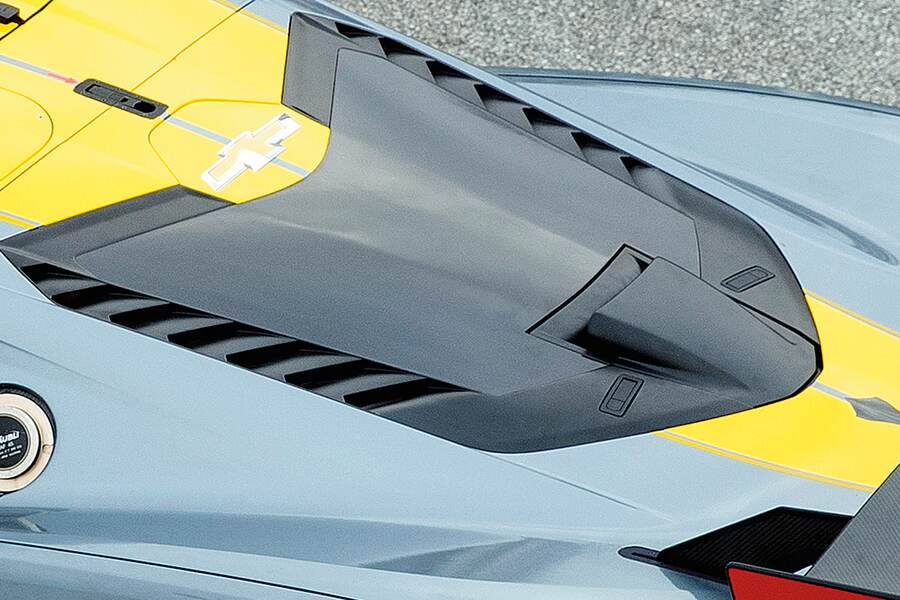 An inlet at the base of the back window ingests intake air for the engine while minimally disrupting airflow over the rear wing. 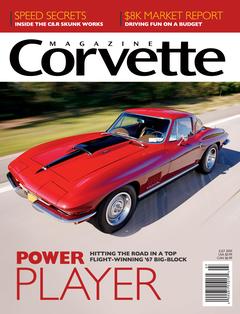