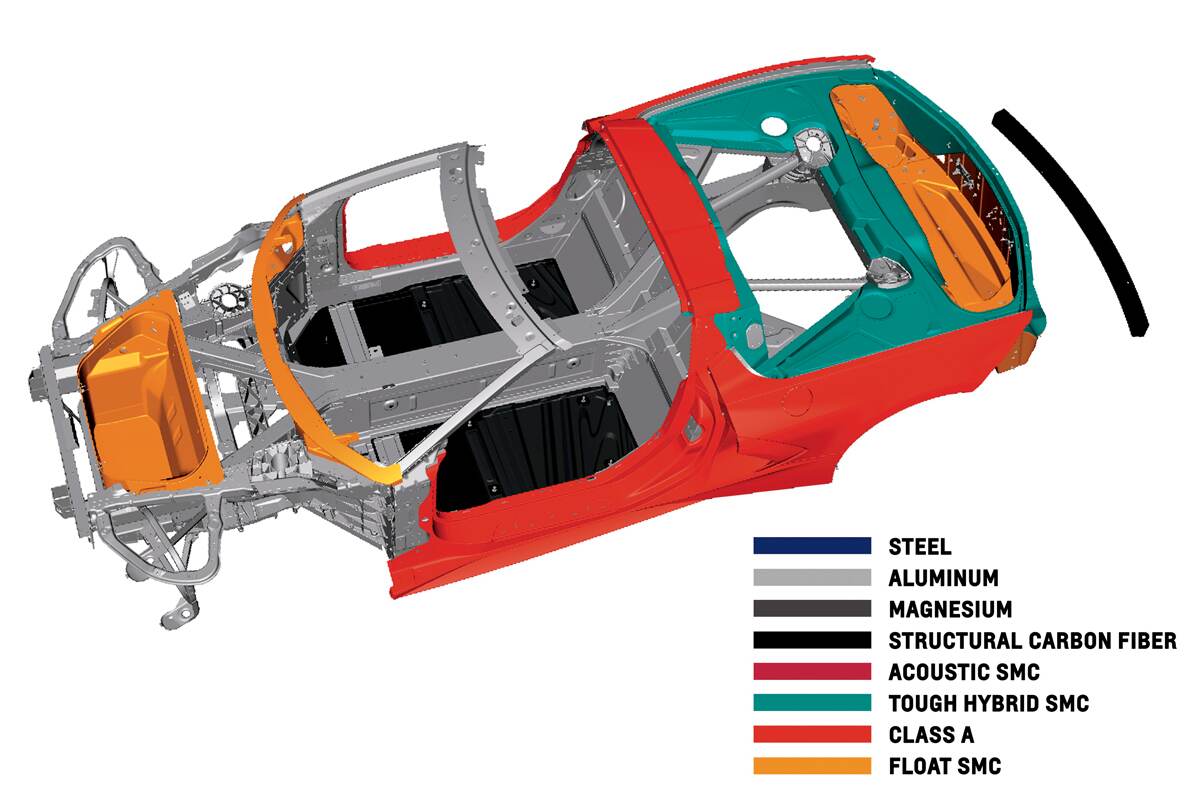 This “X-ray” view of the C8 reveals a medley of low- and high-tech materials. “Float” SMC parts will literally do just that if placed in water.

Photos by Courtesy GM, Car and Driver, and by Jay Heath

Now that we’ve delved into every nook and cranny of the 2020 Corvette’s powertrain, interior, exterior, and driving characteristics, let’s examine the structure that holds Chevy’s new supercar together. This is where we fire an X-ray beam right through the new Corvette’s skin to examine the bones beneath.

GM’s expertise with aluminum space frames dates back to the C6 generation and the 2006 Z06. That 15-year knowledge base, combined with a thorough rethink of how to build a light, stiff support structure, yields the totally new space frame that underpins the C8.

The first things you should note in the new design are less space and more frame. Six new die-cast aluminum components augment stiffness while reducing the number of spot welds tying the frame together. Known as the “Bedford Six,” these elaborately ribbed castings are produced at GM’s Bedford, Indiana, manufacturing plant. In total, they comprise 18 percent of the frame’s mass, versus 40 percent for extrusions, 39 percent for stampings, and 1 percent for hydroformed pieces. As before, the space frame is manufactured at the Corvette’s Bowling Green, Kentucky, assembly plant.

Four of the Bedford castings provide anchor points for the upper ends of the new coil-over-shock units. There’s also a tall box running down the center of the frame acting as the Corvette’s structural spine. This backbone allows lowering the door sills for easy entry, and it prevents any significant loss of structural integrity when the roof panel is removed. Clearly, Chevy has come a long way since the C4 era. 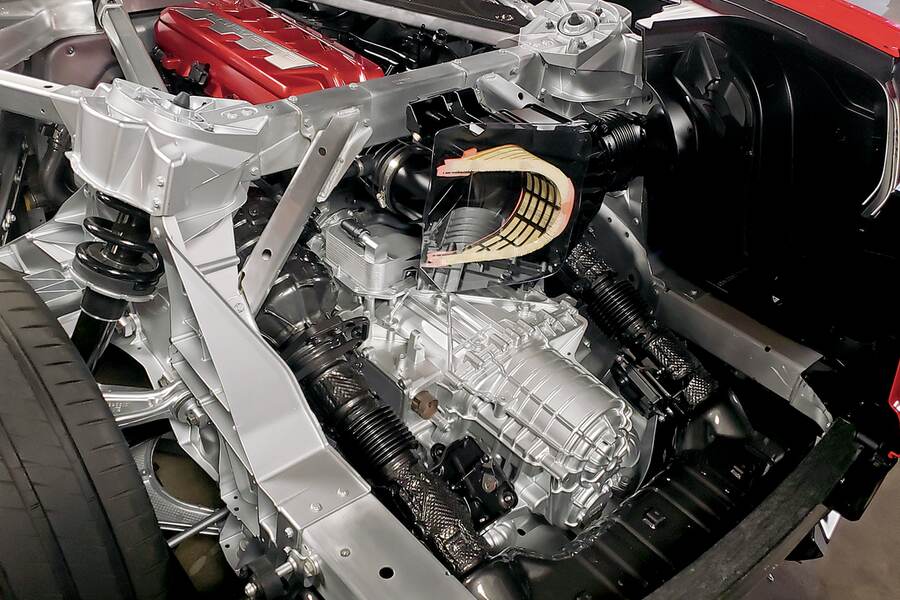 Four of the six Bedford castings provide mounting points for the C8’s all-new suspension hardware. The two rear castings are visible here, with a shock mated to each.

The center tunnel’s open bottom is sealed with a panel secured by a couple dozen fasteners. Made by longtime Corvette supplier Molded Fiber Glass, this close-out panel consists of three layers of glass fiber and two layers of carbon fiber bonded together with vinyl-ester resin. While the central spinal chamber is empty for now, it would be the ideal place to house batteries if the Corvette becomes electrified in the future. (Current rumor has the forthcoming ZR1 model incorporating electric motors in a performance-boosting hybrid configuration.)

The rear portion of the cockpit floor supporting the Corvette’s bucket seats is made up of magnesium die castings, while the forward floors are molded carbon-fiber panels. Another use of the tough, black composite material is for the Corvette’s rear bumper beam, manufactured with a process called “pultrusion.” Carbon fiber doused in resin is drawn through a die to form a hollow, curved member that is 60 percent lighter than C7’s extruded-aluminum beam. Structural adhesive bonds this beam directly to the aluminum space frame. Front and rear luggage bins and a cover at the base of the windshield are made of an ultra-light fiberglass called “float sheet molding compound” (SMC) because it would actually float in water.

After 35 years of use, the Corvette’s transverse fiberglass suspension springs have officially been put out to pasture. In their place, engineers selected one conventional steel coil spring per corner wrapped around a shock absorber. We asked Corvette Chief Engineer Tadge Juechter about the switch.

“While we would have preferred to continue with the composite springs because they are so mass efficient, they simply would not package with the new dual-clutch automatic transaxle,” he explained. “And, once we switched to coil springs in back, we had to use the same type of spring in front to achieve matched force-versus-deflection characteristics at both ends of the car.” 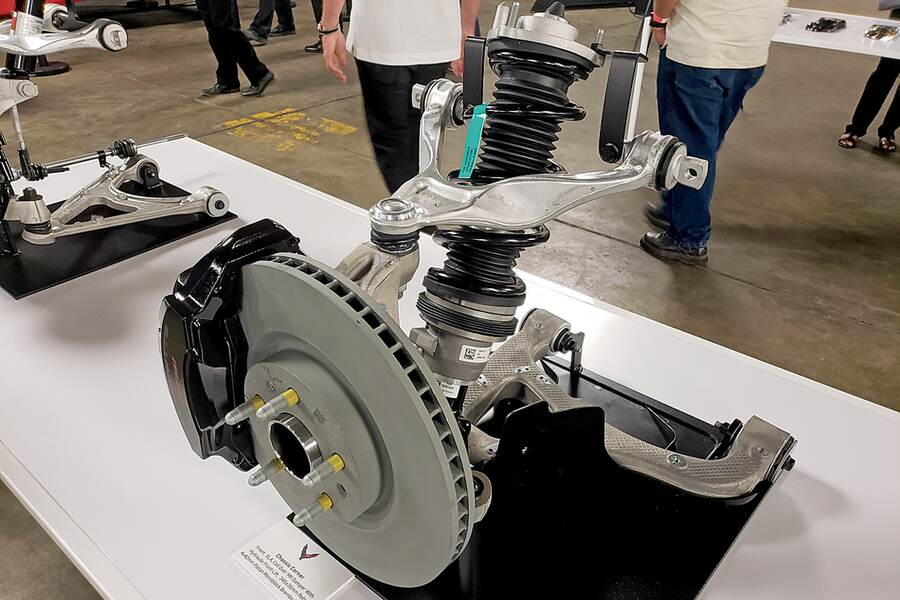 Gone are the Corvette’s familiar fiberglass monoleaf springs, replaced with a coil-over configuration at each corner. Iron disc brakes (Z51 shown) use four-piston calipers and are electronically assisted.

The new coils also enable adjustable ride height provided by a spring seat threaded onto each shock tube. That feature, which is especially handy for track use, is exclusive to C8s equipped with the $5,000 Z51 Performance Package.

GM engineers haven’t acknowledged exactly how much heavier the new aluminum frame is than the C7 design, but they do tout the 19 percent gain in torsional stiffness it brings to the party. (Interestingly, Juechter notes that this measurement is taken with the roof panel removed.) High twist resistance is what ensures that each corner of the suspension reacts in a controlled manner to bumps and bends in the road. In other words, stout underpinnings are essential to achieve excellent ride and handling.

An interesting stat reported by Car and Driver is a one-inch rise in Corvette’s center-of-gravity height—from 18.0 inches for a 2019 ZR1 to 19.0 inches for a 2020 model equipped with Z51. (For reference, a 2018 Porsche 911 GT2 RS splits the difference at 18.5 inches, according to the magazine.) Without confirming these readings, Juechter acknowledges that the C8’s measurement is slightly higher than the C7’s, mainly because of the notably high location of the coil springs and their upper anchor points on the space frame. As noted in previous stories, the C8’s engine and transaxle both live closer to the pavement than in the C7.

A key benefit frequently attributed to mid-engine designs is a low polar moment of inertia. Combining the major powertrain masses in one tidy package positioned near the center of gravity reduces the tire force required to initiate a turn—a long way of describing steering response. A low polar moment also diminishes the effort required to straighten the car when exiting a bend. Without confirming that C8’s polar moment is in fact greater than C7’s, Juechter reveals that a heavy load of transmission parts and two radiators filled with coolant now reside fairly far from the Corvette’s center of gravity. And thus one more myth—that all mid-engine cars boast a low polar moment—is effectively dispelled. 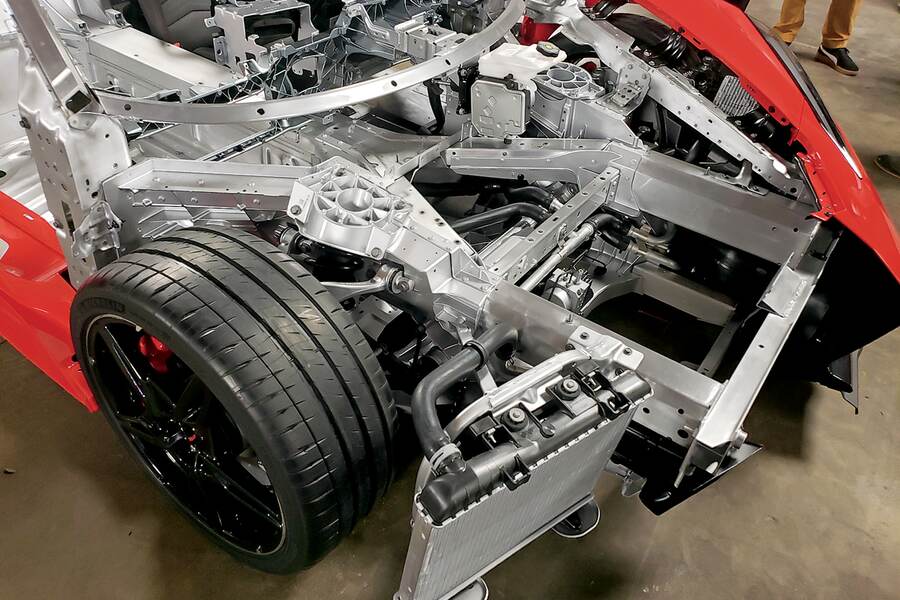 Another cutaway display car reveals two more of the Bedford castings, in this case the mounting points for the front shocks.

The multitude of parts and pieces attached to the new frame are all fresh for this assignment. The control arms, knuckles, and uprights supporting the wheels are aluminum castings and forgings. The rack-and-pinion steering gear mounted ahead of the front axle centerline features an electronically controlled electric assist. For further enhanced response, the steering ratio has been tightened from 16.25:1 to 15.7:1. The turning circle is slightly larger than before except with the optional magnetic ride dampers (more on those anon), in which configuration it is more than a foot tighter (36.4 versus 38.0 feet). A handy $1,495 option allows lifting the nose of the car by 40mm (1.6 inches) in less than three seconds to glide over abrupt verges. More impressively, up to 1,000 such locations can be saved in memory for automatic deployment on daily commutes.

One common gripe about C7 Corvettes is that their front tires “chatter” at full steering lock in cold driving conditions. “We invested ample effort in remedying this issue,” Juechter acknowledges. “Even though we’ve actually tightened the turn circle in C8s equipped with the magnetic ride dampers, we were able to diminish the likelihood of chatter [by employing] improved steering geometry and somewhat softer tire compounds.”

The highly effective, BWI Group–manufactured Magnetic Selective Ride dampers used on the C7 are again available, though the price of this option has risen by $100, to $1,895. Accelerometers reading bumps in the road send electrical signals through a magnetic fluid filled to alter suspension damping every millisecond.

Having grown up under the wing of a fighter-pilot father who owned Porsche 911s, Juechter is no stranger to, or fan of, lift-throttle oversteer. Even though he acknowledges that Porsche’s hottest sports car is a primary reference tool for tuning C8s, his team invested ample effort in assuring that the new Corvette is polite on both street and track. 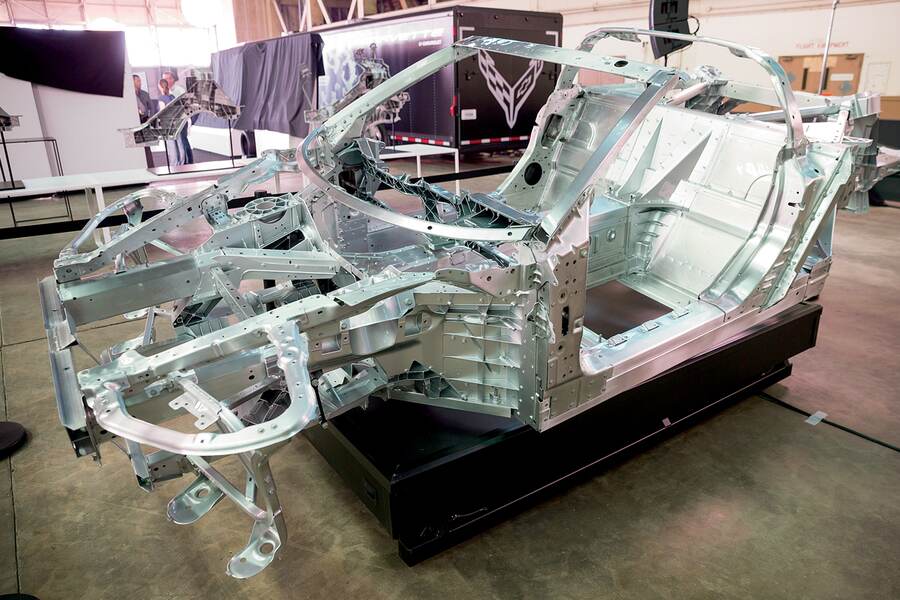 As with the C7, the C8’s aluminum frame is built at the Bowling Green Assembly Plant. Note the carbon-fiber close-out panels in the forward section of the cockpit floor.

“We prefer modest understeer on the street and near-neutral handling on the track,” Juechter explains. “There are many variables involved here: tire construction and compounding; the lateral stiffness…from the tires to the space-frame suspension anchor points; engine- [and] transmission-mounting characteristics; and suspension-geometry details. We want the car to respond in a single, predictable manner all the way to the loss of tire adhesion, with no sudden change in attitude [under] abrupt throttle movement.

“So, in addition to tuning spring rates, damping characteristics, and anti-roll bar stiffness, we incorporate two types of steering to assure all reactions are benign. One is compliance steer that turns the outside rear wheel inward a degree or two when it’s heavily loaded in the lateral direction, and the other is roll steer that turns the tire slightly in as it moves in the upward, “jounce” direction. These tuning measures helped us avoid step changes in Corvette’s aggressive cornering behavior.”

Brembo continues as the Corvette’s faithful brake-hardware supplier. All rotors are radially vented, and there are air ducts to help cool the front brakes on Z51-equipped models. Interestingly, there is no cross-drilling or surface-slotting, and no carbon-ceramic option is available as yet. Juechter explains why:

“To comply with new environmental standards denying [the] use of copper as a brake-pad constituent, we had to reinvent our brake systems. It’s a popular myth that slots and cross-drilling enhance fade resistance. In fact, their primary benefit is flushing water from pad and rotor surfaces during rainy conditions. 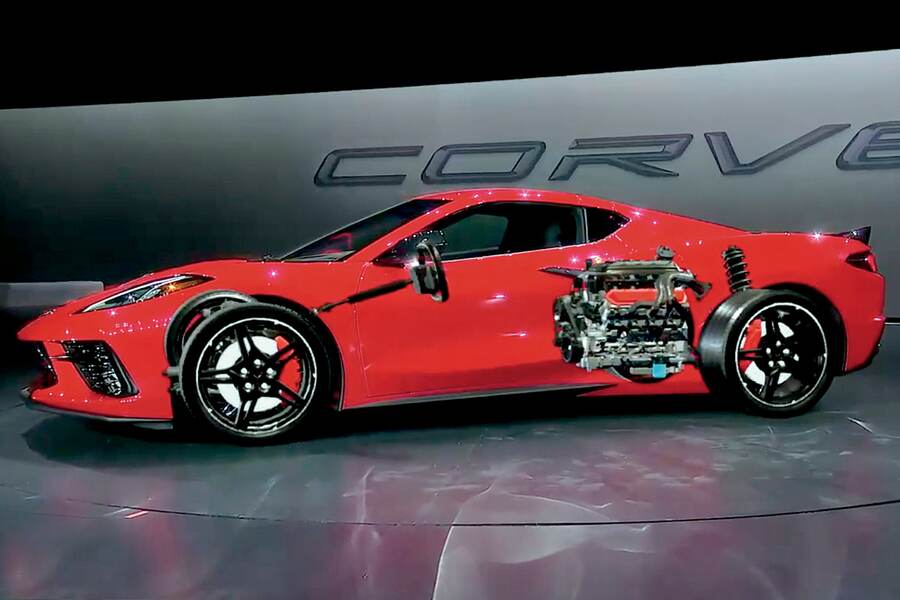 Although the C8’s powertrain is situated lower in the car, the high-mounted coil-overs conspire to yield a taller center of gravity than that of the previous model.

“While I personally admire the look provided by surface slots, they unfortunately cause excessive abrasion of the new pad materials we were forced to adopt. The last thing we wanted was worn-out brake pads in a single racetrack outing.” Asked if carbon-ceramic rotors would appear on hotter C8s in the near future, Juechter responded, “No comment.”

Four-piston monobloc calipers are standard except for the base Corvette’s front calipers, which are a bolted-together, two-piece design. The base car’s rotor dimensions are 321×30mm in front and 339×26mm in back. With the Z51 option, this rises to 345×30 in front and 350×27mm in back. The power assist is electronically controlled in all models.

Corvette and Michelin engineers collaborated over the course of five years to develop new run-flat tire constructions, compounds, and tread designs for the C8. The 245/35ZR-19 front tires mount to 8.5-inch-wide wheels, while the 305/30ZR-20 rears ride on 11-inch rims. The Pilot Sport ALS tires provided as base equipment are a four-season design suitable for dry, wet, and cold-weather use. (Counting on them to plow snow would, however, be foolish.) The Z51 package includes Pilot Sport 4S radials ideal for dry weather and track lapping. When the thermometer dips below 40 degrees (F), these tires should not leave the comfort of their garage.

The C8 Corvette’s chassis engineering rivals anything you’ll find under a $100,000 to $300,000 Porsche, Ferrari, or Lamborghini. If the Europeans have not already returned to their drafting boards, they will inevitably suffer the consequences. Sports and supercar buyers have definitely witnessed this change in the new world order: In anticipation of the C8’s arrival, Porsche’s U.S. sports-car sales dropped 12 percent last year. 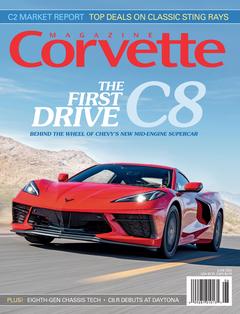