With only 28K original miles on the clock, Spiro Nikolopoulos’ Tri-Power ’67 is a true blast from the past 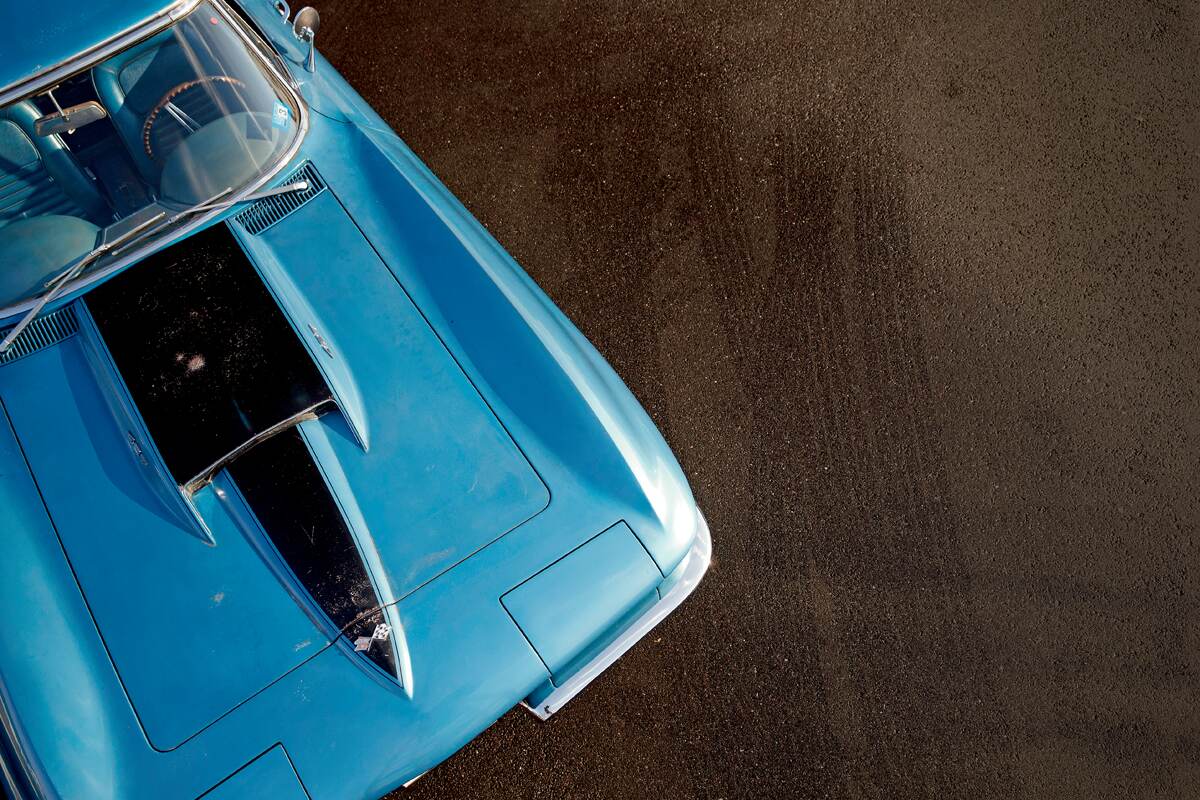 When Robert Adams walked into Rex O’Steen Chevrolet in Greenville, South Carolina, in the spring of 1967, and announced that he was ready to order the new Corvette of his dreams, the salesmen looked at him in utter disbelief. Greenville was still a modestly sized city at the time, with fewer than 63,000 residents, and its economy was in decline as the textile industry that had long supported it began to slow. Consequently, the dealership sold relatively few of what was Chevy’s priciest model. But what really made the salesmen’s jaws drop was Adams’ age.

“I was a very young guy back then,” he recalls with a laugh. “I bought that car when I was 20 years old, and, man, it was really something. I knew what I wanted, [but] it cost a lot of money.” The Corvette cost so much, in fact, that Adams was forced to work two jobs—as a meat packer and a carpet installer—in order to save up for it.“I worked all the time!” he notes with a laugh.

Once the salesmen realized Adams was serious, they were delighted to take his order, which turned out to be a pretty quick process since he’d already been through the sales brochure and options list. “It had to be a blue convertible with two tops…side pipes, and, of course, the high-performance engine,” he relates. “I was really into speed when I was young, [so] I wanted the 427 with three carburetors.” With all the details sorted out, Adams signed the order forms and waited for his car to be built. 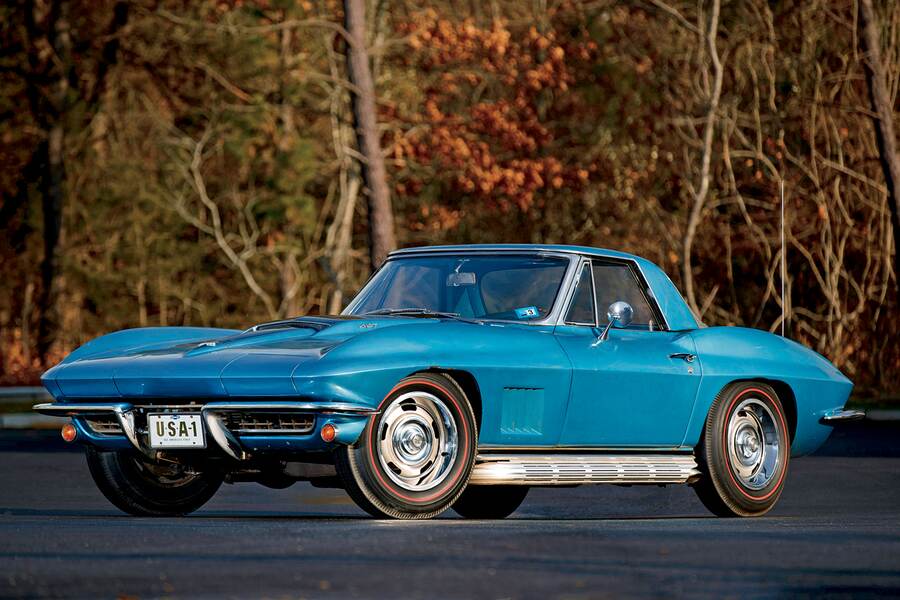 Several weeks after completing his order and paying the required deposit, Adams was cruising along in his hot-rodded ’57 Chevy when he spotted a transport truck carrying new cars headed toward Rex O’Steen. On the carrier was a Marina Blue ’67 big-block Corvette with a hard top and side pipes. “All these years later, I still have that great memory of seeing the truck with the Corvette on it,” he says. Realizing right away that the car was his, Adams followed the truck straight to the dealer to watch it being unloaded.

Although “dream” cars sometimes fall short of the imagined ideal, that wasn’t the case with Adams’ Corvette. “It was fast—real fast—and I loved the speed,” he recalls. “Everyone in Greenville knew the car and knew me. There was another guy in town who had a Corvette, but he went off to college so he wasn’t around all the time like I was.” 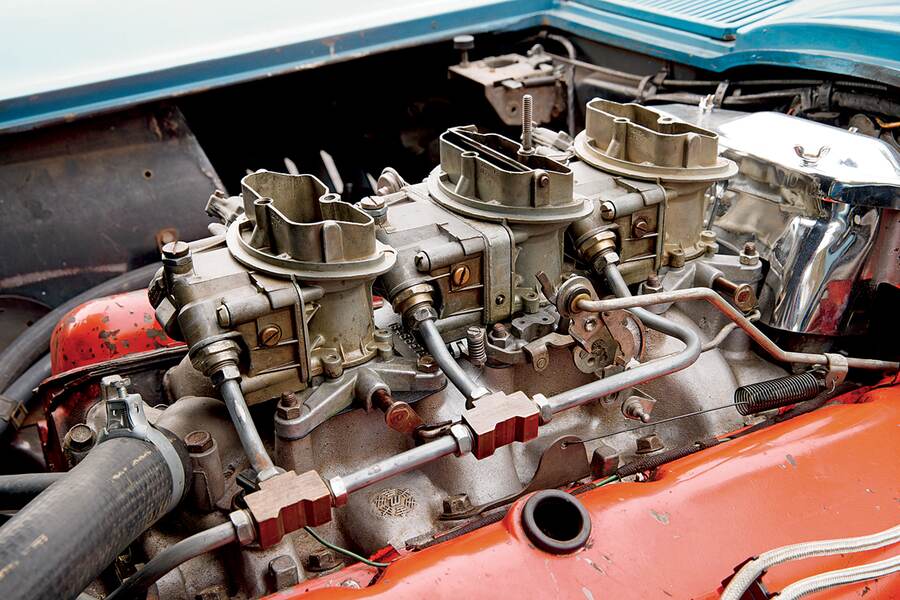 Adams was then, and today remains, a huge drag-racing fan, but miraculously he resisted any temptation to put his pristine, new Corvette on the strip. “I did a lot of running around on the street, and thought about taking it to the track, but never [did],” he recalls. “I did get it up to about 130 mph, which was really moving!”

As anyone who has driven a big-block Midyear Corvette at or near its maximum velocity will attest, the driver feels every one of those miles per hour. But while Adams relished the performance of his potent Tri-Power convertible, he eventually got accustomed to its speed. Too accustomed, in fact.

“I went to my mechanic and told him I wanted more power,” he recalls. “He told me the L88 was the way to go.” That’s when the original three-carb induction system was set aside, and an L88 intake manifold and a massive, single four-barrel were installed. It wasn’t exactly an L88, but the 427 did run harder and look the part. 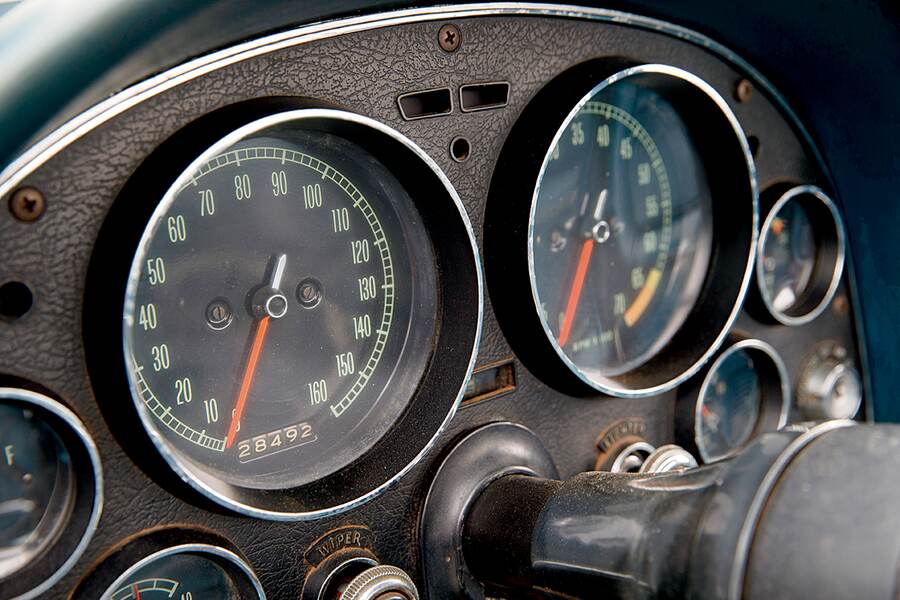 Adams continued running around town with his hopped-up Corvette for about two years, accumulating some 28,490 miles, but eventually his interest in the car, and his fascination with speed, began to wane. By that time, he was driving a Cadillac for his daily transportation and had deposited the Corvette at his father’s house, where it remained for approximately the next eight years.

“I didn’t have a garage at that time, so it was parked…and I didn’t use it very much,” Adams recalls. “Eventually, the grass grew up all around it. Then I bought a house with a garage, so the Corvette was put [there, where it] stayed for a long, long time. A lot of people knew the car and tried to buy it from me over the years, but it wasn’t for sale.”

That changed in 2009, some 40 years after the car was taken off the road and put into storage. Adams was finally ready to part with his magnificent ’67, and his son got the ball rolling by listing it on an Internet auction site. The years of storage had not been particularly kind to the Corvette, with the result being numerous paint blemishes along with some typical deterioration under the hood and inside the cockpit. However, with only 28,492 miles on the odometer, the highly desirable big-block C2 remained almost entirely original, including the paint, body glass, chrome and stainless trim, interior, engine, transmission, rear end, hoses, belts, and shocks. In short, it was a collector’s dream. 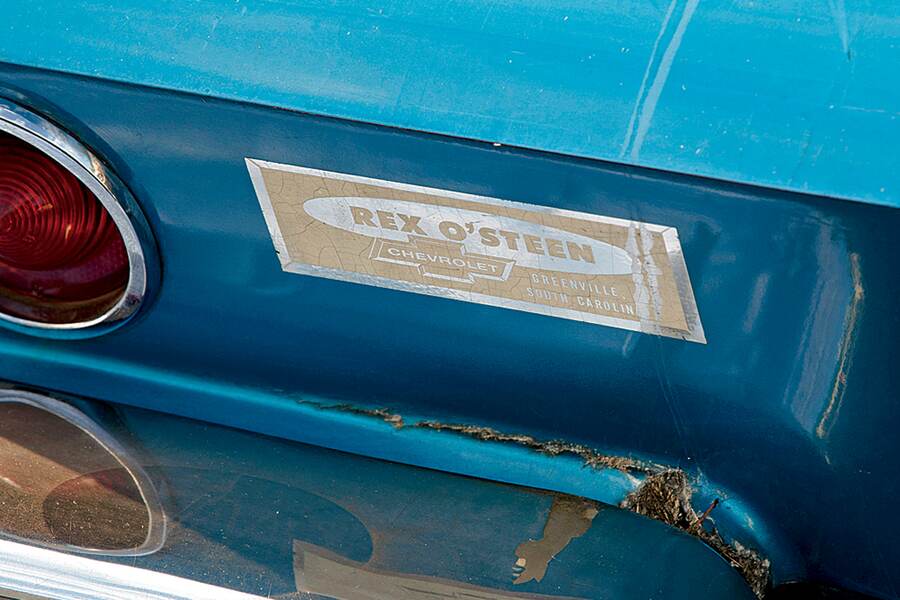 The online auction listing for the car caught the eye of one such devoted collector of rare, unrestored cars, Spiro Nikolopoulos, who first fell in love with vintage Corvettes when he was still a youngster. “I began going to Corvettes at Carlisle more than 30 years ago, when I was only about eight years old,” he recalls. “My father is an avid enthusiast who shared his passion for Corvettes and other collectible cars with me…and both of us have shared our love for cars with my son, so now he’s caught the bug too. Who would ever think that a Corvette would bind three generations together in our family? I guess the old commercial was right: Chevy does run deep.”

Nikolopoulos was astounded by the listing for Adams’ car because it was pretty much exactly what he’d always wanted: an original, unrestored, fully documented ’67 427/435 Corvette with side pipes. He immediately knew this was the car he’d been looking for, and the idea of letting it slip through his hands was unthinkable. Nikolopoulos promptly hooked a trailer to his truck, picked up his father, and drove 15 hours to make the deal.

After buying the car and getting it home, Nikolopoulos reinstalled the Tri-Power induction system but, out of respect for its incredible originality, left the rest of it alone. “I know some collectors would be tempted to ‘fluff’ the car—for example, by finding an undamaged blue-vinyl driver’s seat cover to replace the original one, which has some splits on the seams—but that doesn’t interest me,” he says. “Every car is truly original only once, and if you start changing parts, you take away from that.” 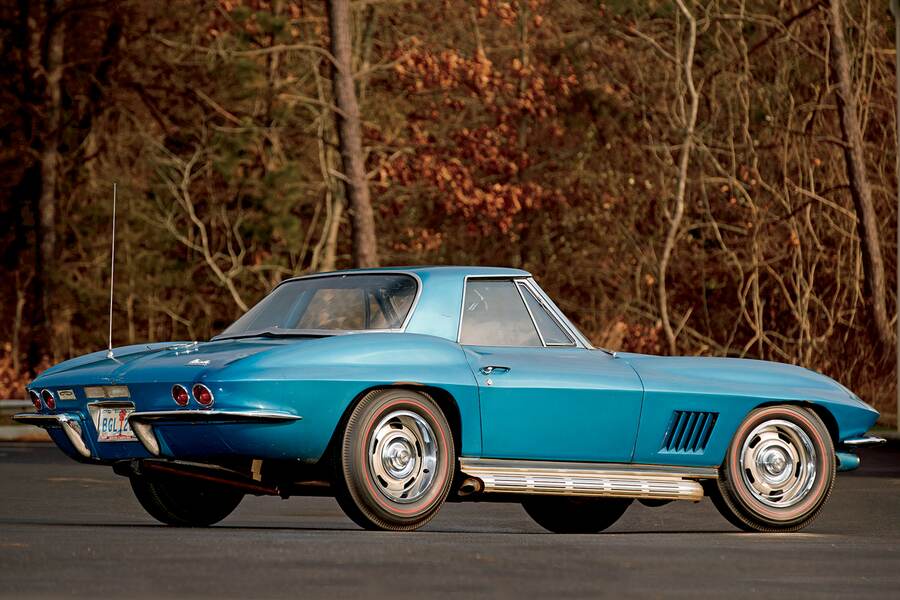 Nikolopoulos has shown his beautiful survivor at several NCRS events, and derived a lot of satisfaction from sharing it with others. He’s also gotten plenty of enjoyment from simply owning and experiencing the car. “For me, some of the most exciting things about it are the look, the timeless styling, and the noise it makes,” he says. “When I’m having a bad day, I just start the engine, and all of a sudden everything is OK again.”

But perhaps his greatest pleasure of all comes from experiencing the joys of the hobby with his son and father. For the Nikolopoulos family, Chevys in general, and Corvettes in particular, truly do run deep. 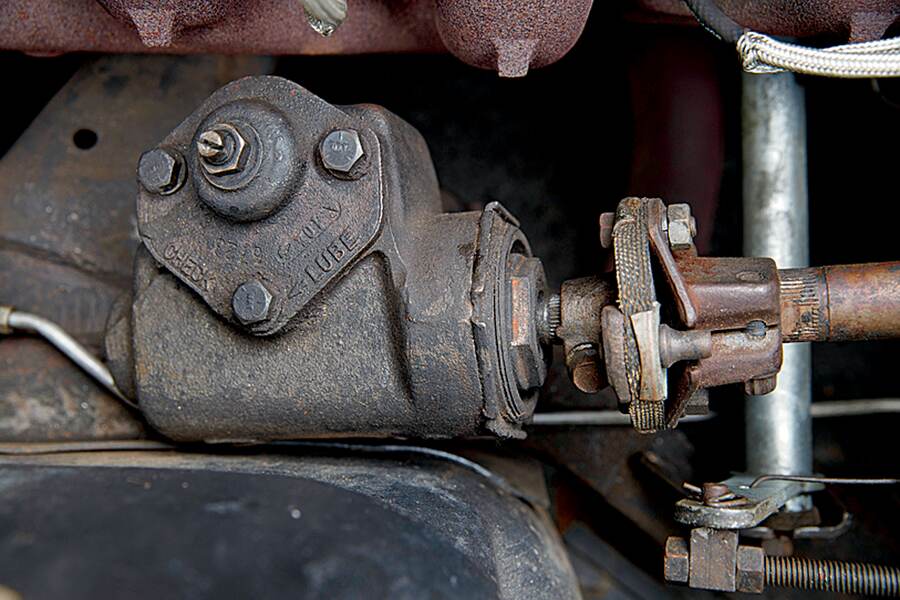 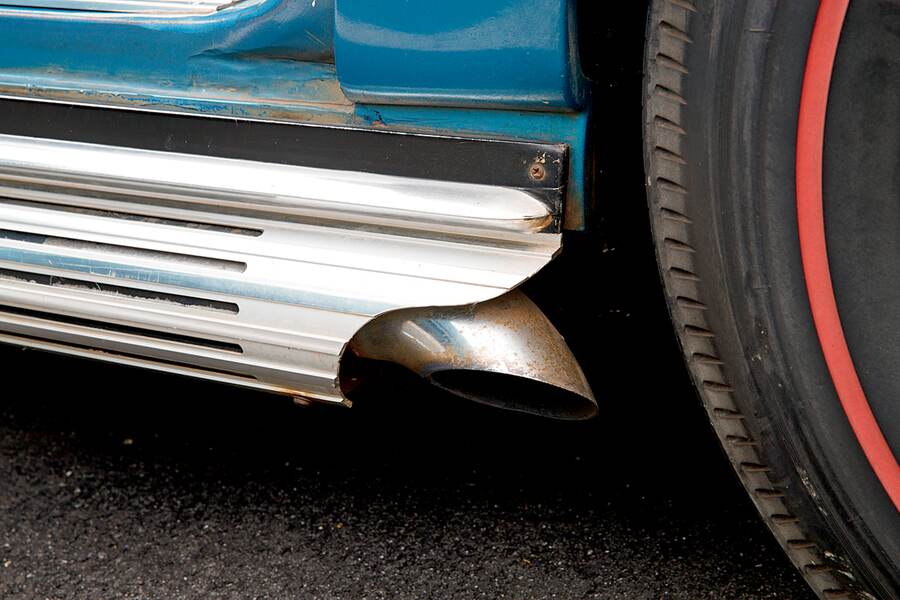 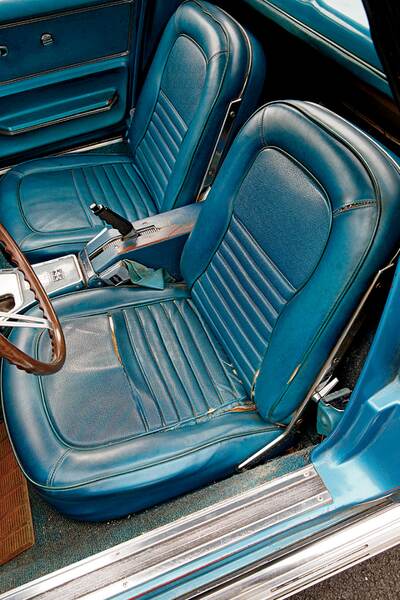 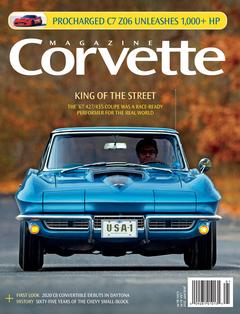