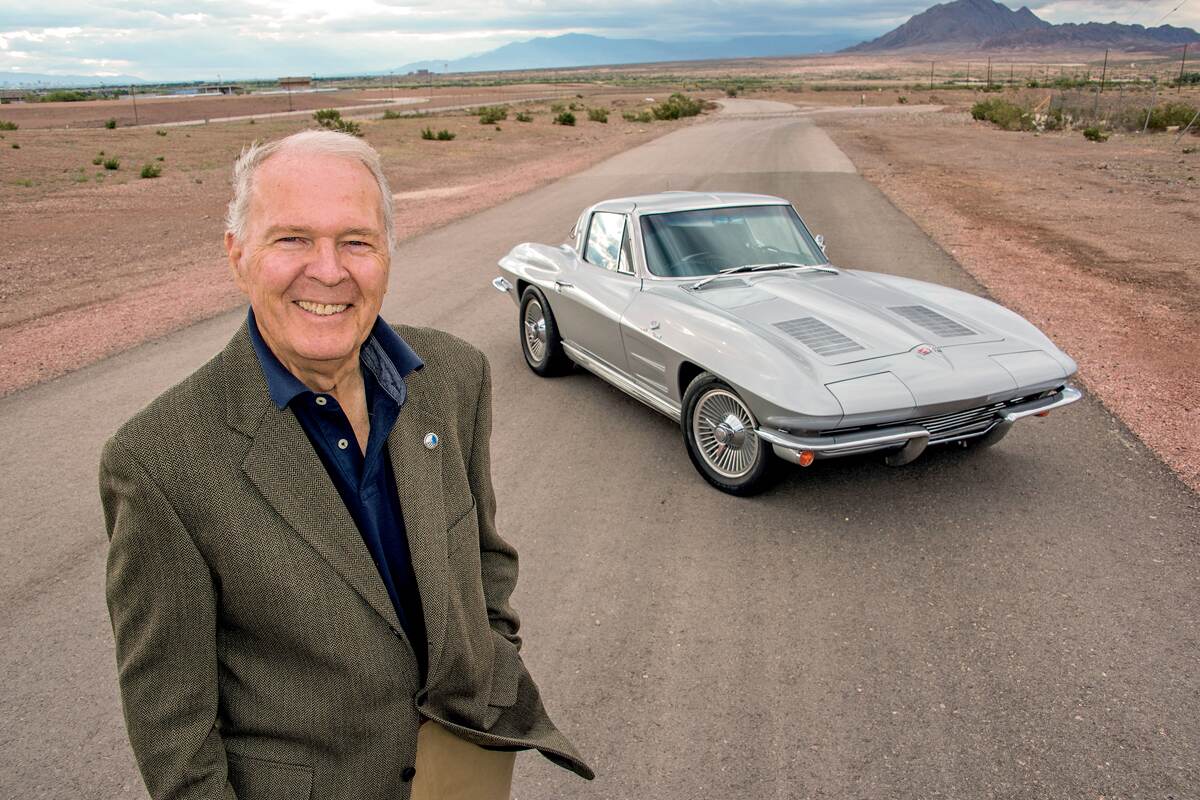 Midyear Corvettes continue to command the interest and investments of discerning collectors. Certainly there are faster and rarer models, so why the enduring appeal of the C2? To answer that, we should go back to the seminal origins of the car, its design influences and the people involved in its development. For the latter, however, there’s only one remaining living member of the design team, Peter Brock.

He put it this way in his book, Corvette Sting Ray—Genesis of an American Icon: “Having the dubious distinction of being the last remaining member of that team, I share this story as I lived it.”

What follows is not merely a synopsis of this pivotal era of Corvette history, but also some unpublished details gleaned from personal visits with Brock at BRE (Brock Racing Enterprises), his company in Henderson, Nevada. The walls of BRE’s offices are lined with archival photos of his impressive career, and next door is the manufacturing facility that produces his innovative Aerovault car hauler. 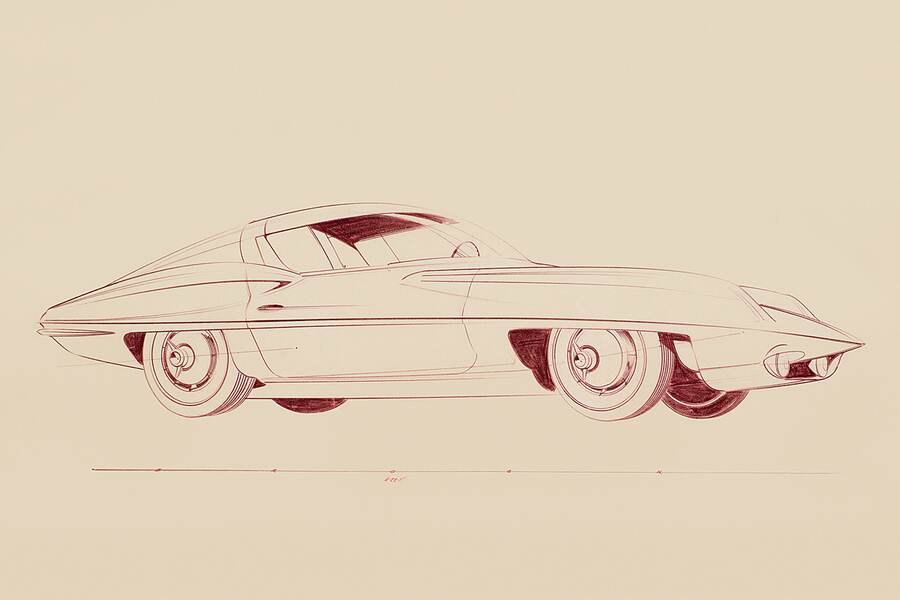 As has been recounted in numerous articles and books, at the tender age of 19, fresh out of the Art Center School of Design, Brock was tapped by GM to apply his talents at the company’s styling studio. Since volumes have been written about the transition from the C1 to the C2 models, we don’t need to rehash that material. Instead, we’ll highlight some key milestones, and expand upon them based on direct interviews with Brock himself.

In addition, we were able to borrow a ’63 Split Window Coupe (sidebar) for an up-close and personal shoot, with Brock’s hands-on explanations of certain design elements of the car. All of which helps to answer our opening query about the Corvette community’s fascination with the Sting Ray. But first, it’s important to address the epochal shift in exterior design that yielded the crisp, hard-edged form of the first Sting Ray in 1963.

“Bill Mitchell wanted to establish himself as the new design leader [as opposed to Harley Earl],” says Brock of the C2’s styling departure. “This required a whole new ‘lean look’ as opposed to the ‘fat cars’ from the previous era.” This bold move was also clearly needed in view of the C1’s meager sales figures, which nearly led to the Corvette’s demise early on. Another factor was competition from a cross-town rival. 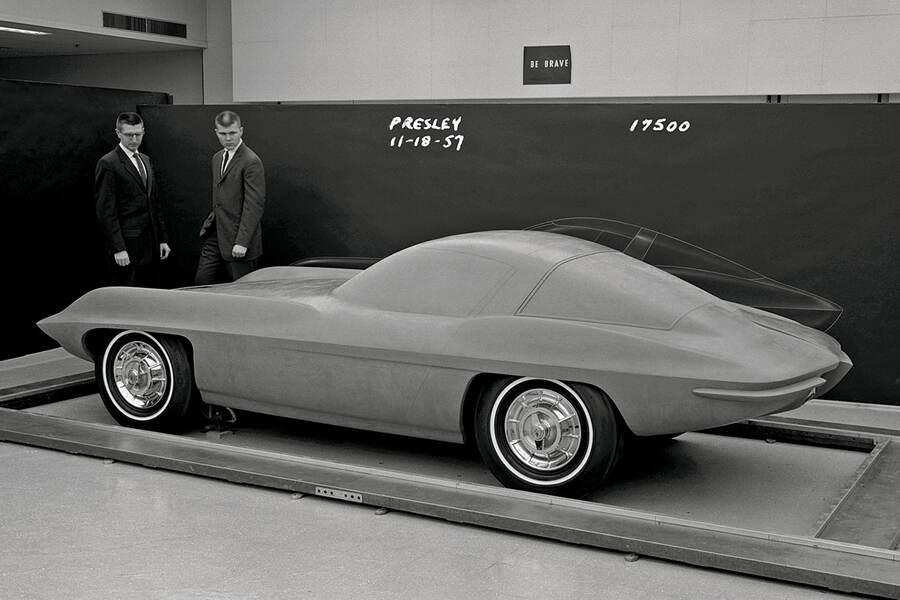 “Ford’s tremendous impact on the two-seater market with the ’55 T-Bird indicated that something really special would be required to change the public’s impression of GM’s design direction,” Brock points out. In line with that, a new variation of the Corvette had to be introduced with the C2. “Mitchell knew that a coupe would be important to match the T-Bird’s obvious advantages [including a hard top and roll-up windows].”

Given all that, Mitchell looked across the Atlantic for inspiration. According to Brock, he found that the Zagato-bodied Alfa Disco Volante had all the styling attributes and creature comforts he hoped to incorporate on the Corvette. The car’s strong sales, meanwhile, offered proof that sports-car buyers—European ones, anyway—were willing to embrace a radical shape. Even though Brock and Mitchell didn’t agree on every element of the new concept, Brock praises the styling chief’s vision.

“He was right on all counts,” Brock allows. “First-year sales over 10,000 units put the Corvette program in the black for the first time since the [car] was introduced.” 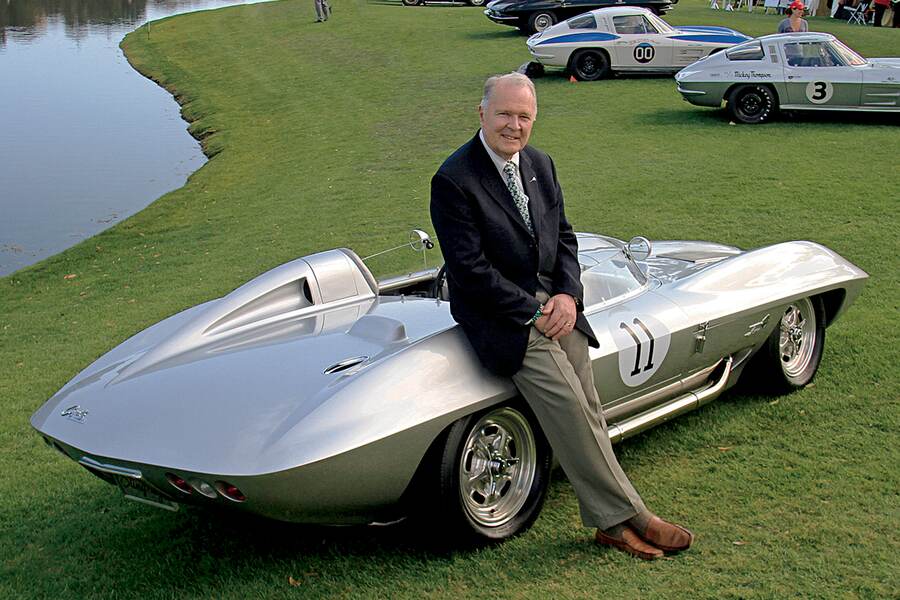 And that popularity continues to this day, as noted at the outset. In hindsight, what has made the Midyear Corvette so prized after all these years? The prototype used to develop it, originally designated XP87, is a telling indicator. The car later morphed into the legendary Stingray Racer, with the one-word spelling instead of the two-word label “Sting Ray” used on the C2 production cars. (Note, too, that some references refer to it as the XP-87, but Brock says the studio label used did not have a hyphen).

“Time has proven that the C2 is a design icon from an age that still has strong influence with GM Design and all Corvette enthusiasts—and it gets rarer by the day,” Brock notes. Indeed, when not out on tour, XP87 is displayed in the front hall of GM’s Design Center headquarters in Warren, where it serves as inspiration to a new generation of stylists. “[Everyone] working there will tell you that Bill Mitchell was the guy who had the greatest influence…after Harley Earl, and that the Sting Ray was perhaps his favorite and greatest contribution to the design language of his era.”

That impact still resonates in today’s models, as Brock notes. “Talk to any of the guys responsible for the Corvette’s lines…and they’ll tell you that the C2 is still a major reference point in their constant review of what they are currently working on,” he notes. “They ask themselves, ‘Is this as powerful and strong a statement as the original?’” But he adds that factors such as aerodynamic work and functionality now receive much more emphasis during the process. 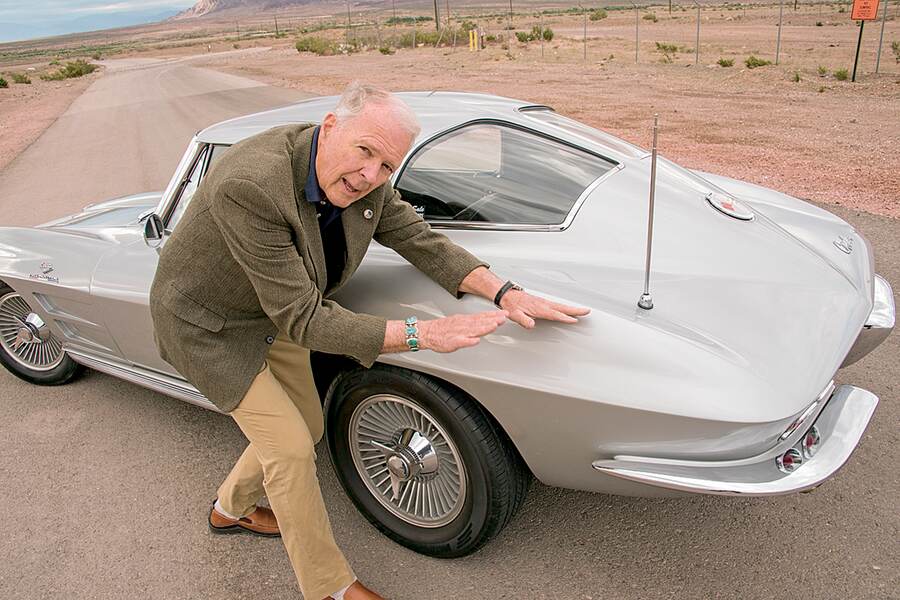 What Could Have Been

Brock does acknowledge that there were some design elements that he wishes he could’ve incorporated, but which were overruled by Mitchell. In retrospect, one wonders if perhaps Brock was right.

“Perhaps the most important design line that I wanted, and Mitchell disagreed on, is the crisp ‘beltline’ that defines the perimeter of the car’s form,” he says. If you look carefully at his preliminary sketch (shown at left) from November 22, 1957, it has a very subtle “S” shape, with the nose much lower than the aft end. It was there for a pragmatic reason, drawing from a technical emphasis on airflow that would affect many of Brock’s later designs.

“This was done to improve aerodynamic downforce,” he explains. “Mitchell was oblivious to the importance of aero and still believed in the classic ‘teardrop’ form propounded back in the 1920s and ’30s by designer Paul Jaray. Proof that I was correct came when we first ran the XP87 in 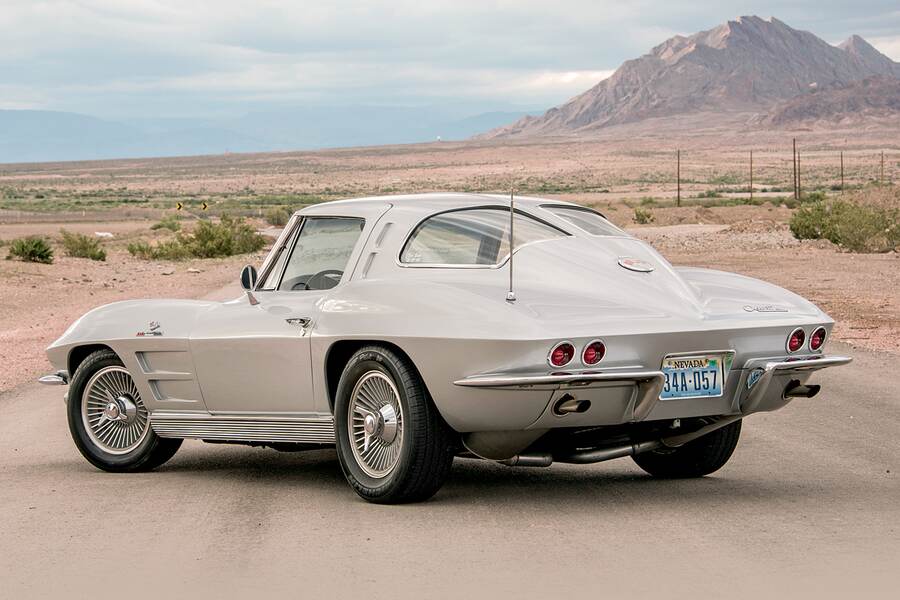 an SCCA race with Dr. Dick Thompson at the wheel.”

It seems that XP87’s “form over function” aero was so poor that the car’s front wheels came off the ground at about 140 mph. Ironically, Thompson was reprimanded for “erratic driving” and banned from racing for a couple of months. Later, the issue was partly corrected by changing the whole stance on the car, with the front suspension set much lower. Still, many Midyear Corvette owners later found that the problem carried through to the production Sting Ray.

Speaking of the production car, while the XP87’s influence on its shape is undeniable, there are some significant differences in its stance and proportion. Brock points in particular to the subtlety of the lines on the prototype’s shorter wheelbase, as well as its longer front and rear overhangs, clear signs of the car’s aesthetics being compromised for production. Still, he acknowledges that his fellow designers, Larry Shinoda and Tony Lapine, did a remarkable job of keeping much of the concept’s original lines.

In addition, XP87 was hobbled by upper management’s continued emphasis on styling over performance. Note that the car’s true potential was demonstrated with the similar SS Corvette at Sebring in 1957, when both Juan Manuel Fangio and Stirling Moss broke the existing lap record, but couldn’t repeat their performance because the “special” cera-metallic drum brakes were so obsolete. Brock observes that Jaguar had won Le Mans because of its then-revolutionary disc brakes in ’55, leading Zora Arkus-Duntov to implore Chevrolet Engineering to install the modern binders on the car prior to its ill-starred outing in Florida two years later.

But as noted by Brock, GM Styling “owned” the car, so the money to build it came from Styling’s budget, allowing that branch to call the shots on equipment selection. “Which drove Zora crazy, as he was essentially hired to ‘consult’ to improve all GM cars,” Brock recalls. “Everything he wanted to do cost more money, and bean counters continually shot him down.”

So in addition to bad aero on the XP87, it had poor brakes, Brock says. “Had there been any development budget, the car could have dominated racing both in America and Europe,” he opines. “All this just proved how isolated from reality GM’s management was.”

Even with this emphatic evidence from racing, Mitchell wouldn’t relent on changing the brakes or beltline, Brock recalls with a wince. “By then I was no longer at GM, and the project had moved upstairs to the ‘hammer room,’ where Larry Shinoda and Tony Lapine did the Sting Ray’s final lines according to Mitchell’s direction, with the ‘fall away’ longitudinal beltline.”

In hindsight, Brock observes that, had those elements been changed, all subsequent early Sting Rays would have been faster and safer to drive. Evidence that great designers never rest when it comes refining and reinventing their creations. m 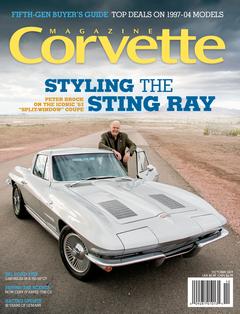