Rare and to Go 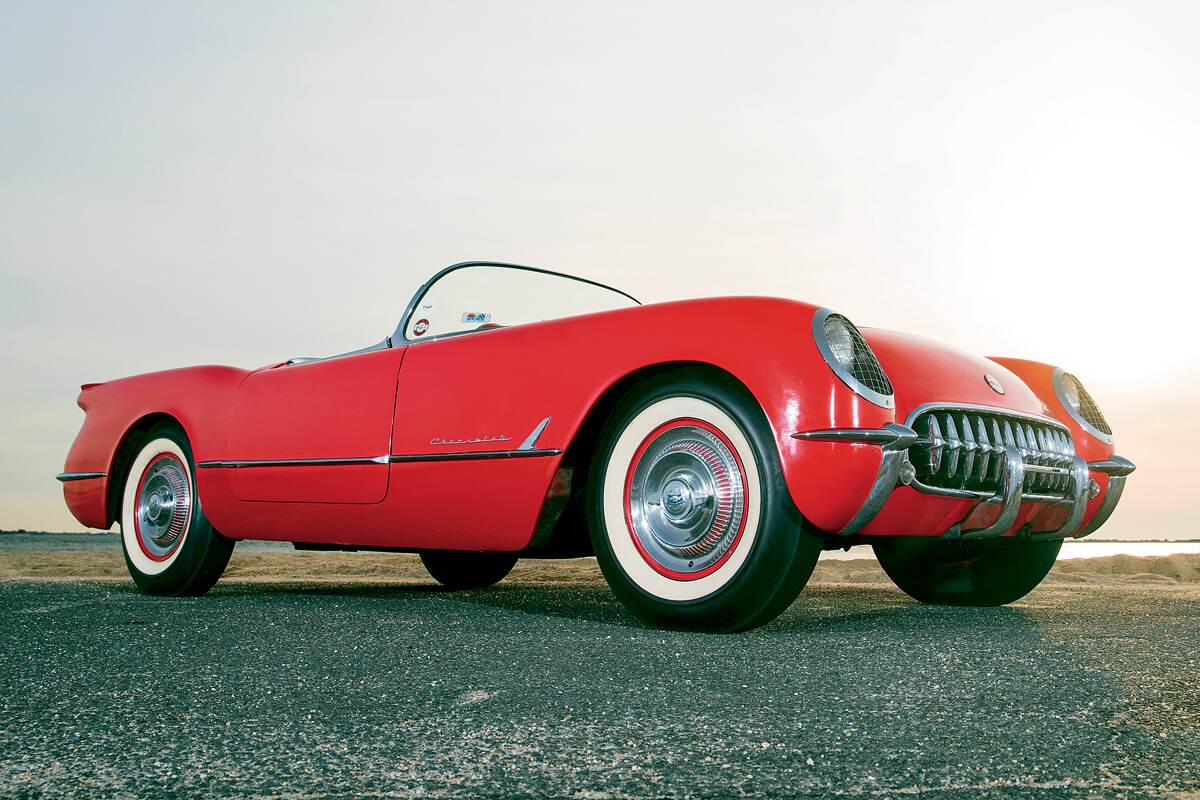 Exactly 100 years before our featured 1954 Corvette was manufactured, author Henry David Thoreau wrote, “If a man does not keep pace with his companions, perhaps it is because he hears a different drummer. Let him step to the music which he hears, however measured or far away.” Though he didn’t know it, Thoreau was accurately describing the car’s owner, Alan Blay. Blay is one of the world’s foremost experts on first-generation Corvettes, with a particular love for the six-cylinder cars made in 1953 and ’54.

Blay has been collecting and driving C1s since buying his first one, a ’62 model, on May 28, 1969. “I paid $1,500 plus my father’s well-used 1964 VW Beetle convertible,” he says. “The car had 71,540 miles on it and was Roman Red with a red vinyl interior, which I’ve always liked. The architect Frank Lloyd Wright used Cherokee Red [a similar but darker shade] and he called it ‘the color of creation.’”

The fact that Blay remembers the exact mileage of a car he bought 51 years ago, or that he discerns a link between something Wright said and his beloved Corvette, is not remotely surprising to this author. I’ve known him for more than 40 years, and when it comes to collectible cars in general, and early Corvettes in particular, he has a photographic memory. Moreover, he views every single one of them as a work of art in its own right. 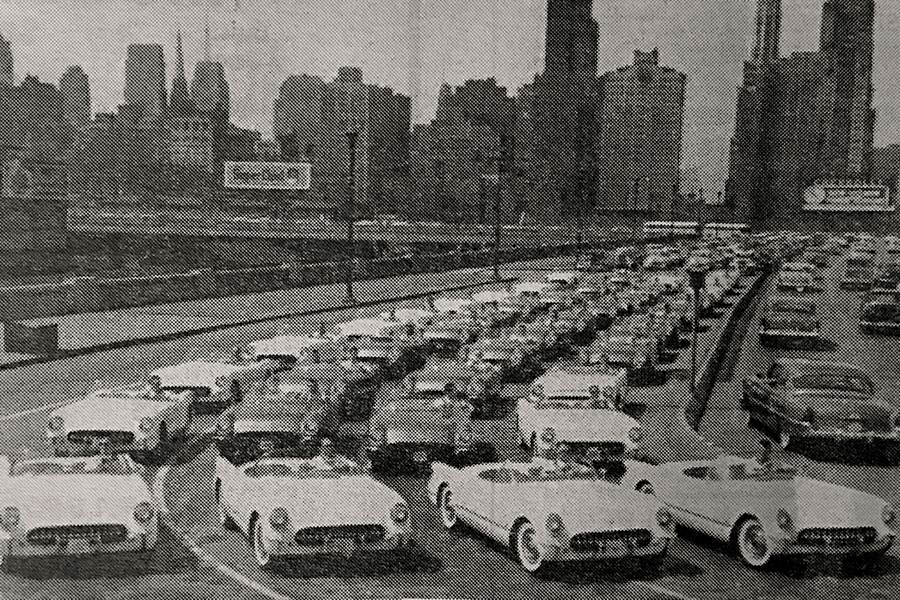 More than 40 ’54 Corvettes leave Chicago following that year’s GM Motorama. These “Drive Away” programs had the twofold purposes of familiarizing Chevrolet dealers with new models while also providing photo-worthy promotional opportunities such as this one.

The ’62 Corvette Blay bought in 1969 served as daily transportation and weekend race/rally warrior through 1977. That year he sold it, along with a ’59 he owned, to raise the $5,500 needed to buy a ’54 model. “For about $3,000 more, I could have bought a brand-new ’77 Corvette,” he recalls, “but I chose to go the six-cylinder route instead. The first ’54 I bought needed cosmetics but was running and driving. Even then, six-cylinder Corvettes were difficult to locate, and most were very beat up and had been modified over the years, so I was happy to find a good one.”

The primary reason why six-cylinder Corvettes were difficult to find in 1977 was because so few were built in the first place. Production began in June 1953 with a temporary assembly line that was set up in a small customer-delivery building on Van Slyke Avenue in Flint, Michigan. In December 1953, after only 300 ’53 Corvettes were built, production moved to a dedicated portion of Missouri’s sprawling St. Louis Chevrolet Assembly Plant. What was then known as the Fisher Mill Building became the Corvette Assembly Plant, while the remainder of the St. Louis complex continued to assemble Chevy passenger cars and trucks just as it had done since 1920. When 1954 Corvette production concluded, another 3,640 six-cylinder units were built. Add in the very small number of ’55s that did not receive the new V-8, and the total production of six-pot Vettes was just 3,945. To put that in perspective, overall Chevrolet automobile production for 1953 and ’54 totaled more than 2.49 million units.

Since acquiring his first straight-six Corvette in October 1977, Blay has bought—and in some cases sold—several dozen others, accumulating an encyclopedic level of knowledge along the way. His most recent acquisition is the ’54 shown here. In 2018 the car was offered for sale at an auction in Carlisle, Pennsylvania, where it grabbed his attention for several reasons. First, it’s an early car, number 130 out of 3,640 built, and that means it left the St. Louis facility with a lot of 1953 parts, including a nose and hood made from hand-laid fiberglass cloth, short exhaust tips, dual hood-release cables and “bullet style” air cleaners. Second, it’s an extremely original car that still retains most of its factory-installed parts and has never been wrecked or restored. And third, it’s one of a comparatively tiny number of ’54 Corvettes that were finished in Sportsman Red, as opposed to the much more prevalent Polo White carried over from the previous year. 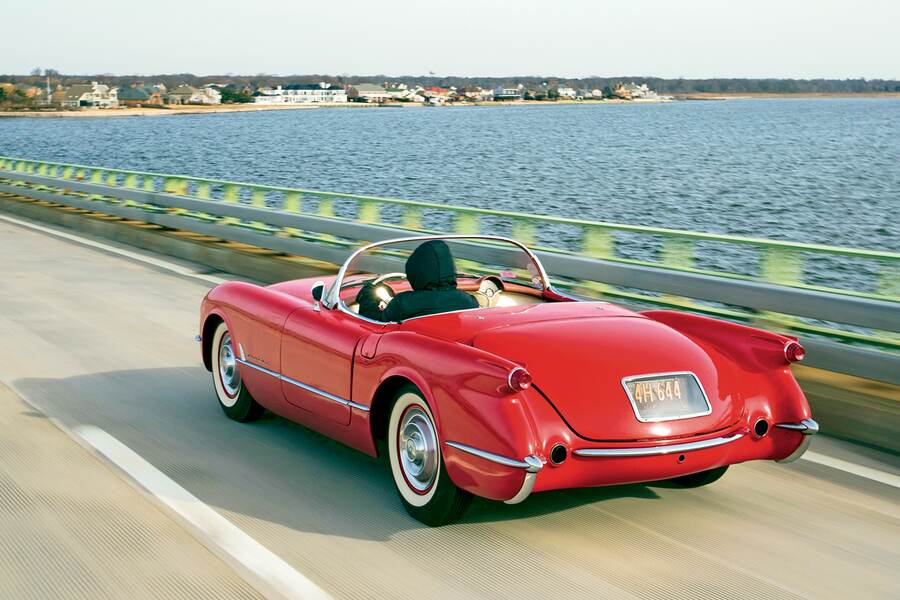 Our feature car was “born” on February 2, 1954 and delivered to Fencl Chevrolet in Oak Park, Illinois, later that month. “The fact that the car was Sportsman Red, and that it went to Fencl Chevrolet, was not by chance,” explains Blay. “Chevrolet had a program called ‘Dealer Drive Away,’ whereby Chevrolet dealers were offered the opportunity to inspect and drive the new Corvette, and the cars were driven in a group, in conjunction with the GM Motorama, for publicity purposes.

“Dick Fencl, owner of the…dealership, worked with a man named Ralph A. L. Bogan to help organize the Chicago Drive Away. Bogan was one of the founders of Trailways Bus Company [and] was the first owner of 1953 Corvette #034.”

Approximately 44 ’54 Corvettes were on hand for the Chicago event. Of these, 28 were Polo White and 16 were Sportsman Red. “[Chevrolet] didn’t want all of the cars in the Drive Aways to be the same color,” Blay notes. In March 1954, another Drive Away program was organized in California by Harry Mann Chevrolet, in conjunction with the Los Angeles Motorama. Another 11 Sportsman Red Corvettes were built for this event, along with four black cars that Blay believes were the only ’54s so painted. 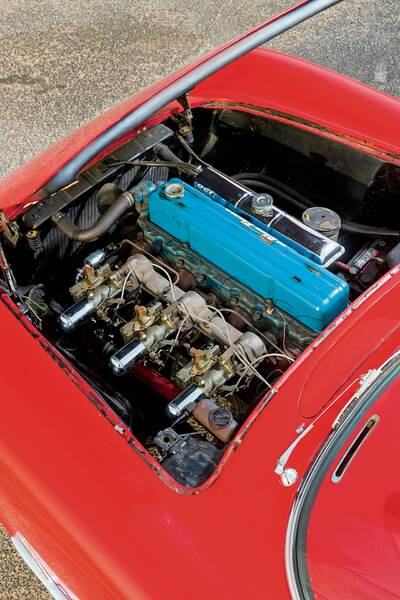 All six-cylinder Corvettes were somewhat rudimentary, even by the standards of the 1950s, and ’53 through early ’54 models were especially imprecise owning to the hotchpotch of hand-made parts used to assemble them. It’s no surprise then that so few ‘54s were painted black, given that color’s propensity to reveal waviness and any other surface imperfections in a body. Based on his own research over the past half century, Blay believes that the 27 Sportsman Red cars seen in photos of the Chicago and Los Angeles Dealer Drive Away programs probably represent something very close to the total number of ’54 Corvettes painted that color. It wasn’t until later in 1954 production, when the method for producing the body panels transitioned from the slow and crude hand lay-up method to a process called vacuum-bag forming, and then finally to matched-metal die molding, that the exterior surface quality was good enough to be painted something other than basic white.

“Actually, Chevrolet drew specification paint instructions for seven different color combinations for Corvette in 1954,” explains Blay. In addition to the aforementioned white, red, blue and black shades, these included Beige Bronze, Onyx Black, green and Pennant Blue. Only the latter made it into production, however, and even then not until late April of 1954, too late to participate in the Drive Away program. Blay believes that around 800 Pennant Blue ’54s were produced in total.

Aside from its unusual hue, there was little to distinguish #130 from the other ’54s that rolled off the assembly line, since all Corvettes produced that year were identically equipped. In theory Chevrolet offered eight options in ’54, but in reality every Corvette left the factory with all eight of them, including a recirculating heater and defroster system, directional signals, whitewall tires, a parking-brake alarm, courtesy lights, a windshield washer, a signal-seeking AM radio and a Powerglide automatic transmission. 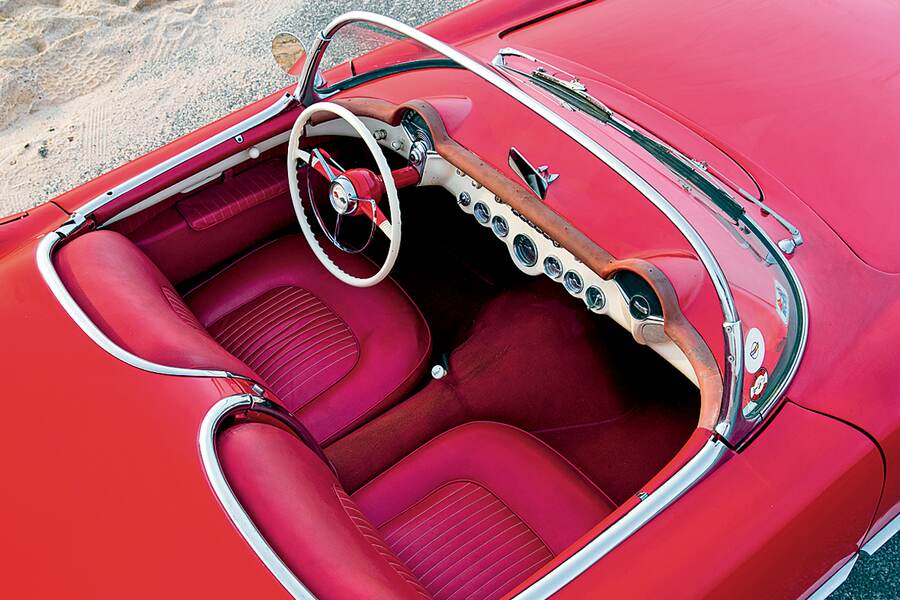 The engine powering #130 is the original 235-cubic-inch, 150-horsepower inline six it was built with in St. Louis. It was created using the same cylinder block as many other Chevrolet models but featured a number of Corvette-specific parts, including the valve cover, water pump, intake manifold, high-compression cylinder head, high-performance camshaft with solid lifters and a trio of Carter YH single-barrel carburetors.

Torque flows through a two-speed, cast-iron Powerglide automatic that is very similar to the transmission used throughout GM cars of the era, albeit with a Corvette-only tail housing. A Hotchkiss open driveshaft connects the trans to a differential fitted with 3.55:1 gears.

Unlike most very early Corvettes, this one was never wrecked, “updated” with things like V-8 power or a 12-volt electrical system, or taken apart and restored. Most of the body was repainted long ago, but plenty of original paint remains in places like the doorjambs, under the convertible deck lid and in the trunk. Similarly, some of the cabin’s soft trim, including the seat covers and carpet, were replaced with OEM parts at some point in the past, but much of the interior remains unrestored. 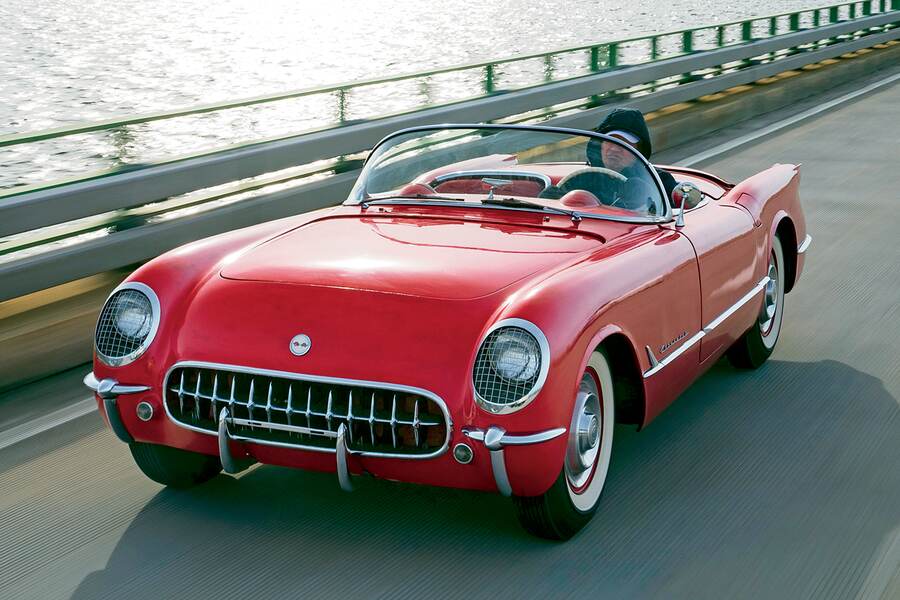 The odometer reads 87,412 miles, and Blay believes this to be accurate based on the overall condition of the car as well as the originality of all of its major mechanical components. “The engine, transmission and rear end are original to this car,” he points out, “and almost everything under the hood, including the radiator, starter, generator, intake and exhaust manifolds, and carburetors, is [as well].”

As with every Corvette he has owned, Blay drives his rare, red ’54 regularly. In fact, the very first thing he did after purchasing the car in Carlisle was drive it some 230 miles home. Since acquiring it, he’s done basic maintenance and rebuilt the starter motor, generator and voltage regulator, all in the interest of keeping the car reliable and on the road for at least another six decades.

While some people would fully restore this classic Corvette, or at least tighten up its cosmetics, Blay is very happy to leave it as is. “I appreciate the thought, engineering and styling that went into creating these cars,” he explains, “and always value originality over cosmetic perfection. I’ve fully restored several six-cylinder Corvettes, but only when the cars were too far gone to be preserved and enjoyed in an original state. 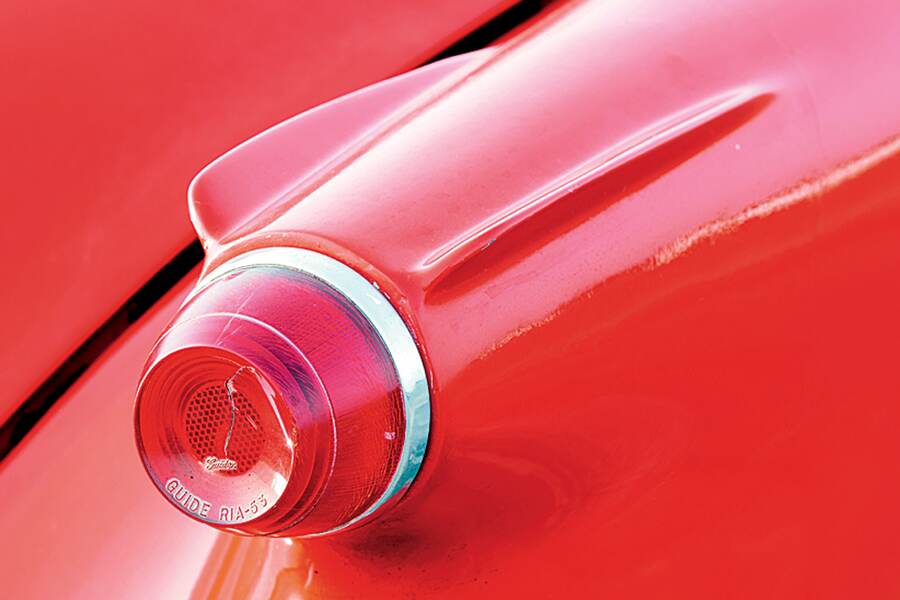 Harley Earl’s jet-fighter styling cues are fully in evidence on Vettes of this vintage.

“Corvette is the only Motorama ‘Dream Car’ to be put into production virtually unchanged from its experimental design concept, and I find them fascinating in every way. Looking ahead, I’ll continue doing what I’ve been doing for more than 50 years, which is studying, documenting, maintaining and driving them every day.” 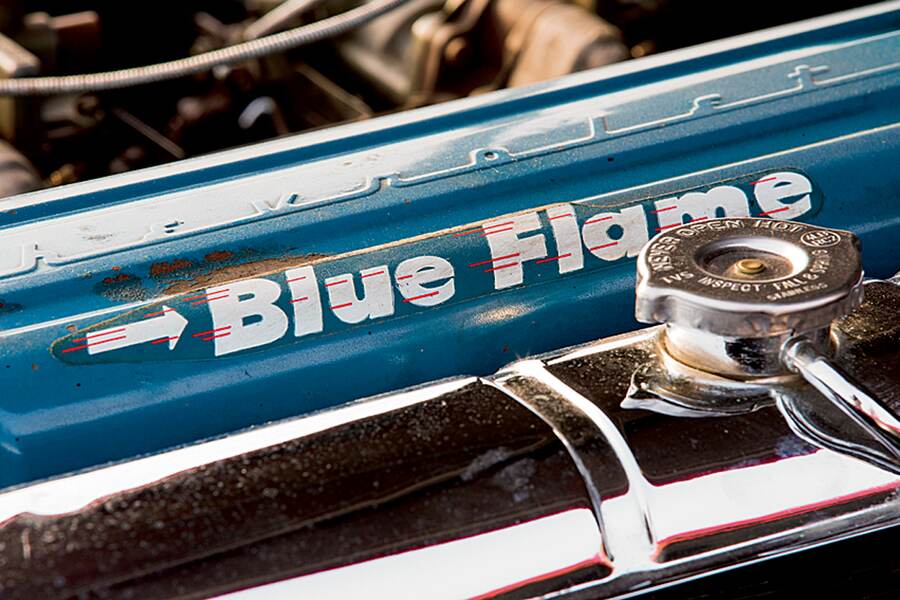 Though based on Chevy’s bread-and-butter automobile engine, the Corvette’s “Blue Flame” six did receive a smattering of alterations, including this stylized valve cover. 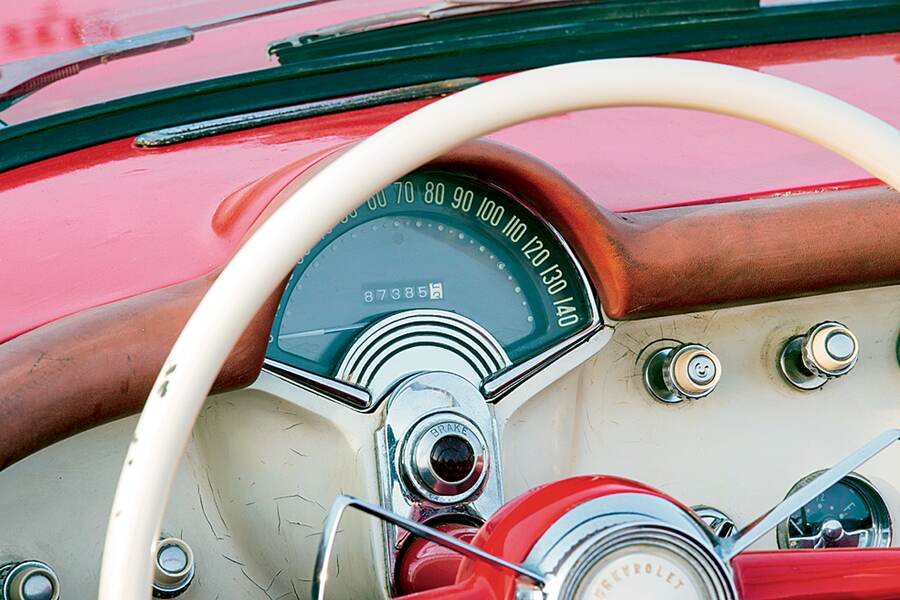 Like the rest of the car, the interior of Blay’s ’54 shows honest wear from more than 87,000 miles of use—use that continues to this day. 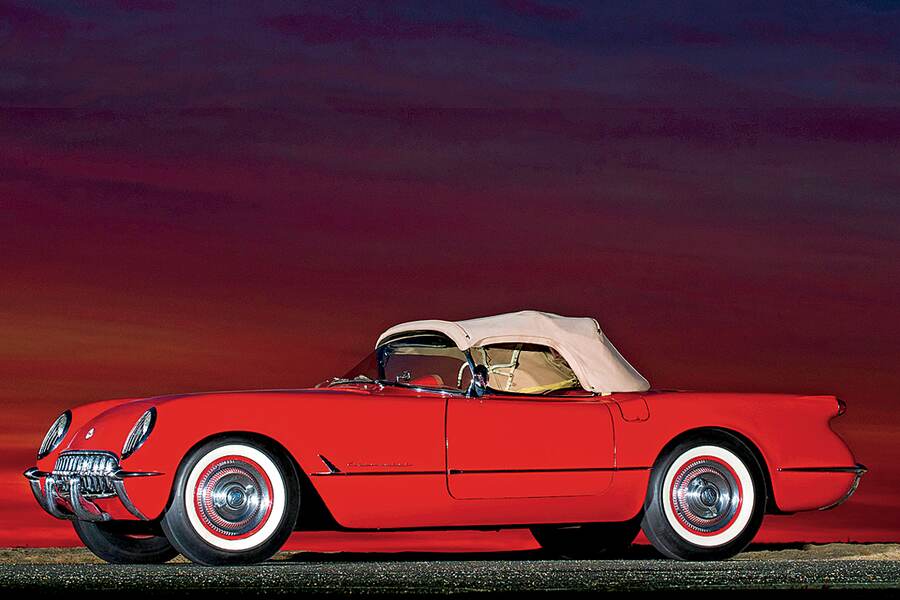 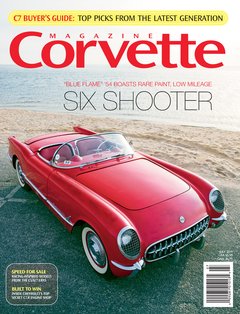