The C4 Gets Serious

In the first of a three-part series, we recount the story of Chevy’s in-house twin-turbo project 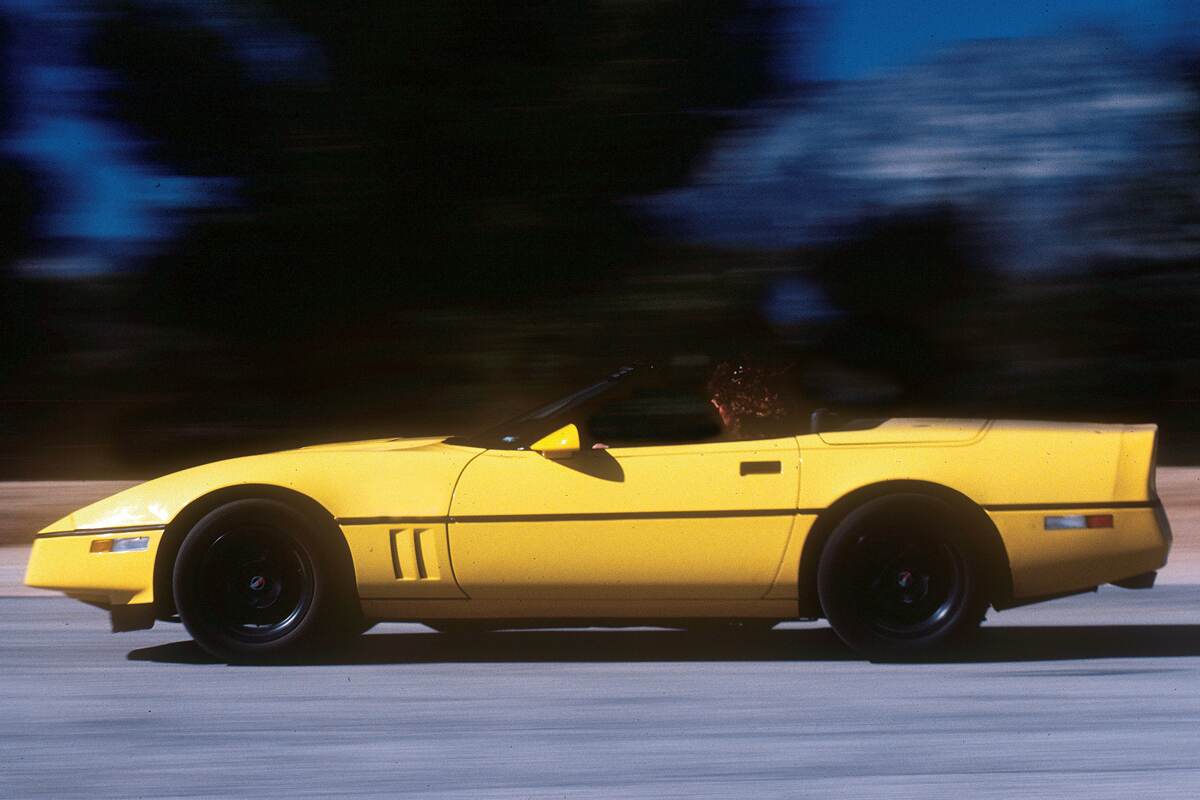 Many Corvette aficionados car assume Chevy’s sports car has always been a global benchmark for performance, but a closer look at the model’s history tells a different story. Yes, there were racetrack success as far back as the mid-C1 era, but production offerings from that period were primitive, ill-handling beasts compared with their European competition. The C2 and C3 that followed had vague steering, marginal handing, lousy brakes and, in later years, soporific straight-line performance. And while the fourth-generation Vette was revolutionary in many ways, the first-year model was slow, unrefined and harsh-riding.

A more powerful, 150-mph model arrived in ’85, but the car was still hobbled by a fidgety manual transmission and middling build quality. Meanwhile, the new-for-’86 convertible’s flaccid structure prevented General Motors from offering the topless model with a true track-capable suspension. So while the C4’s performance was nearly there, it was a stretch to refer to the car, as Chevrolet did at the time, as truly “world class.”

The engineers and product managers who set Corvette’s course in the late-’80s knew that more power was a necessity if the car was to become a segment-defining product. The eventual result of their deliberations was the 1990-1995 C4 ZR-1, the first Corvette fully capable of competing alongside the world’s best. The road to the ZR-1 was long and winding one, and along the way there were multiple concepts, component cars, test mules, prototypes and development vehicles. In this issue and in coming months, we’ll be profiling three such cars, starting with VIN EX4289—a twin-turbocharged convertible I remember fondly as the “Rapid Roadster.” 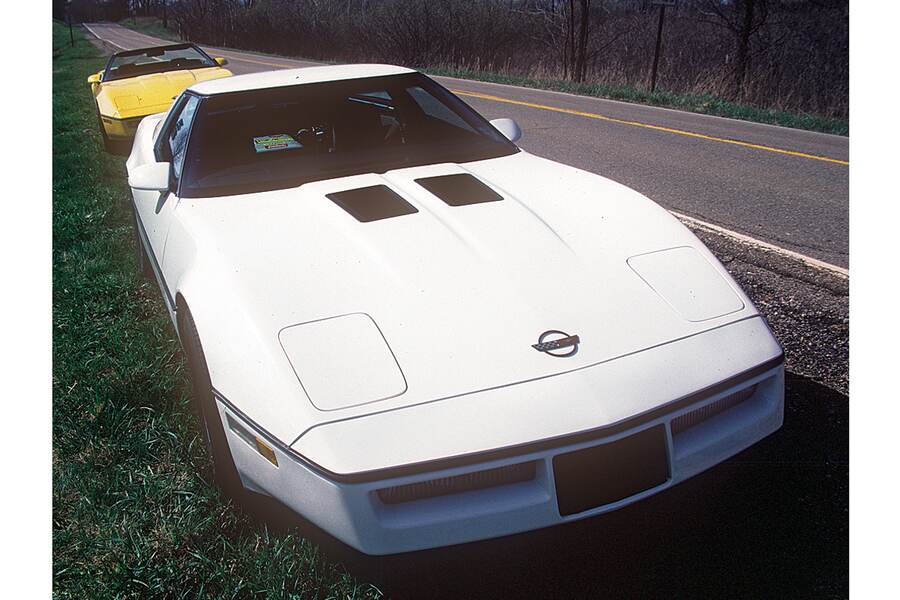 From Six to Eight

As it turned out, these engines didn’t have much more power than the coming L98, and their noise, vibration and harshness (NVH) characteristics were unacceptable for a production car. The project was summarily scrapped, and the team moved on to a more appropriate platform. As McLellan wrote in his excellent book, Corvette from the Inside, “So, the engine guys finally got the V-6 out of their system and we settled down to work with them to package a twin-turbo V-8.” From early 1984 to early 1985, the team focused the bulk of its attention on a twin-turbo (TT) V-8. SVI constructed 14 TT development vehicles using production C4 coupe chassis in late 1984, with testing beginning that summer.

In the car business, marketing trends change quicker than you can say “America’s Sports Car,” and so it was with the 400-hp Corvette. Performance-wise, the TT V-8 could meet the desired criteria. But GM Vice President Lloyd Reuss vetoed this approach, believing that a turbocharged, pushrod V-8 would be perceived as low-tech by potential buyers. His answer? A high-revving DOHC V-8 that pushed the limits of automotive design and engineering. In a late-1986 interview with this writer, Corvette Development Manager Doug Robinson said, “The car always must incorporate leading-edge technology. Fact is, turbos make lots of horsepower, but for marketing, drivability and durability reasons, [they] are pretty low-tech items nowadays.” 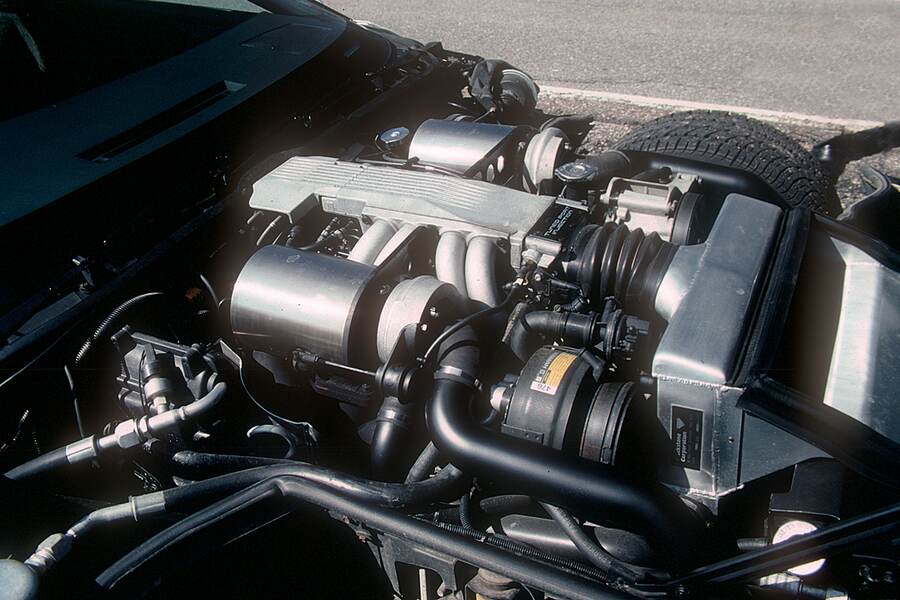 The TT Corvette project was shelved, but the 14 already-assembled prototype cars were kept around to use in testing powertrain and chassis components destined for the “King of the Hill” ZR-1. Occasionally, they even did promotional duty. One of the last ones built was fitted with a more powerful engine pushing 560 hp, unheard of back then for a car you could drive on the street. A top-speed test published in the February 1986 issue of Road and Track saw Corvette Powertrain Manager Jim Ingle pilot the screaming blue coupe to an incredible 191 mph.

What about EX4289, the 15th and final twin-turbo and the only convertible? It was built in the spring of 1986 from one the first convertible prototypes and the powertrain from Ingle’s 191-mph coupe. Chevrolet planned to take it to the Indianapolis 500 as part of the ’86 convertible Indy Pace Car promotion, to give VIPs, race officials and press a thrill to remember.

But the week before the 500, Corvette engineers realized they would face a credibility problem if the Rapid Roadster were shown alongside a lineup of 230-hp production Pace Cars. Said Ingle, “People were coming by all week before the race, looking at the cars and asking, ‘Are they turbocharged?’ We kept saying, ‘No…they’re stock Corvettes.’ All we’d need was to have a turbo sitting there while we were telling people the [production] Pace Cars didn’t have turbos.” 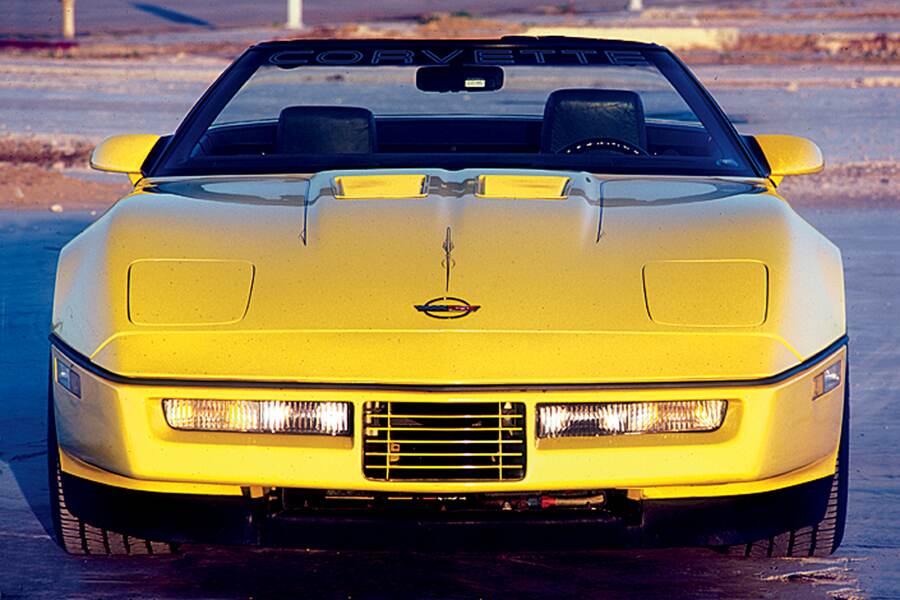 In the summer of ’86, the TT ’vert was assigned to Ingle’s powertrain-validation program and shipped to GM’s now-defunct, Mesa, Arizona proving ground. In January 1987, I asked to test the car. Director of Chevrolet Public Relations Ralph Kramer agreed and had the car shipped to Los Angeles for a two-week road test.

The car was clearly a “ringer,” with its two big cooling vents on the hood, a front intake for the intercooler and 50-series tires on powder-coated black wheels. The tires were a soft-compound “S” racing version of the Goodyear Eagle VR50 production rubber. The wheels were pricey Dymags made of die-cast magnesium and imported from the UK. Other notable items were the 560-hp twin-turbo engine and a real Nash five-speed with an add-on overdrive (not to be confused with the Nash 4+3 used in ’84-’88 C4s). The car also had an experimental 3.54 rear end and a set of larger front brakes that were being developed in conjunction with showroom-stock Corvette racers.

The first thing I did was attack the Angeles Forest Highway in the mountains north of LA. With the sticky tires and stiffer springs, bars and shocks, the car’s handling approached that of a Z51 coupe. The only thing you really had to watch for was the car getting twitchy near its limits. I attributed that to the effect the big springs and bars had on the C4 convertible’s weak structure. The other problem was holding back my right foot on corner exits. Lean on the gas too hard coming out of a turn, and boost would put the car sideways faster than you could say, “Loose!” There was no active handling or electronic limited slip to bail out an unwary driver. 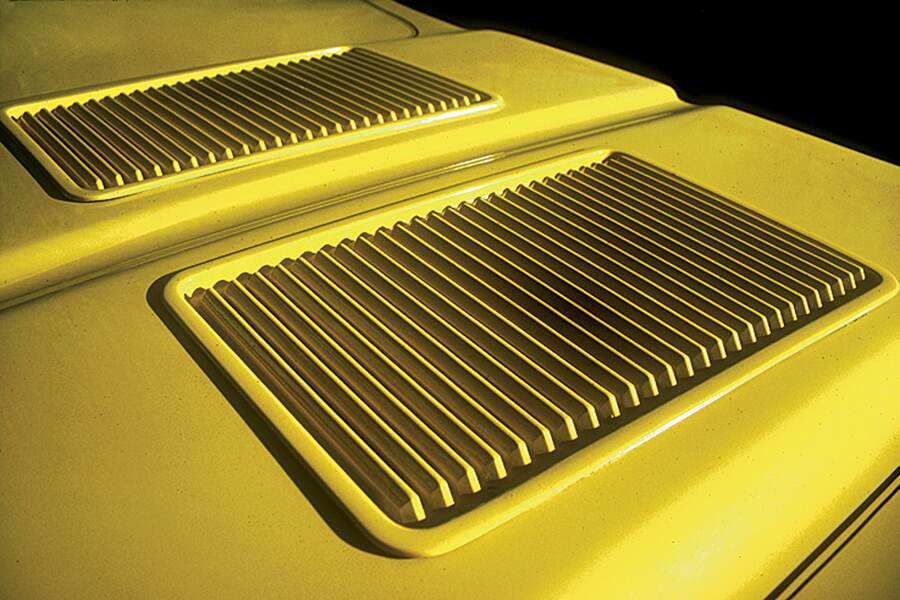 To confirm my feelings about the car’s ability to stick in turns, I ran it on the skidpad and saw 0.875g, close to what production Z51 coupes could do back then. Zero to 60 took 4.4 seconds. I then took the Rapid Roadster deep into the desert and ripped a 0-to-100 run in about 9 seconds. In the quarter-mile, the bright-yellow orgy of acceleration went 11.76 at 122.4. But the most revealing figure was the 0-100-0 run, which took an astounding (for a production car back then) 14.7 seconds. The mix of a turbocharged engine, ABS and the big brakes made for a hell of a driving experience back in 1987. Top speed with the 6,000-rpm limiter, 3.54 gears and a 0.82 overdrive was a hair under 160 mph—plenty fast given the lack of a stabilizing deck spoiler.

Despite its hellish performance, the car proved a model of refinement. Nearly everything worked including the Delco-Bose sound system, the air conditioning and even the digital instrumentation. The only problems were a passenger-side seat with an electrical problem, an occasionally sticky rear deck-release solenoid and a nonfunctional cigarette-lighter socket.

The car even got decent gas mileage. My average over 1,223 miles was 13.57 mpg running 100-octane unleaded racing gas. That’s quite an achievement for a 560-hp car with only a .82 overdrive. I did one short test where I purposely stayed out of the boost, and the car achieved 18.7 mpg. 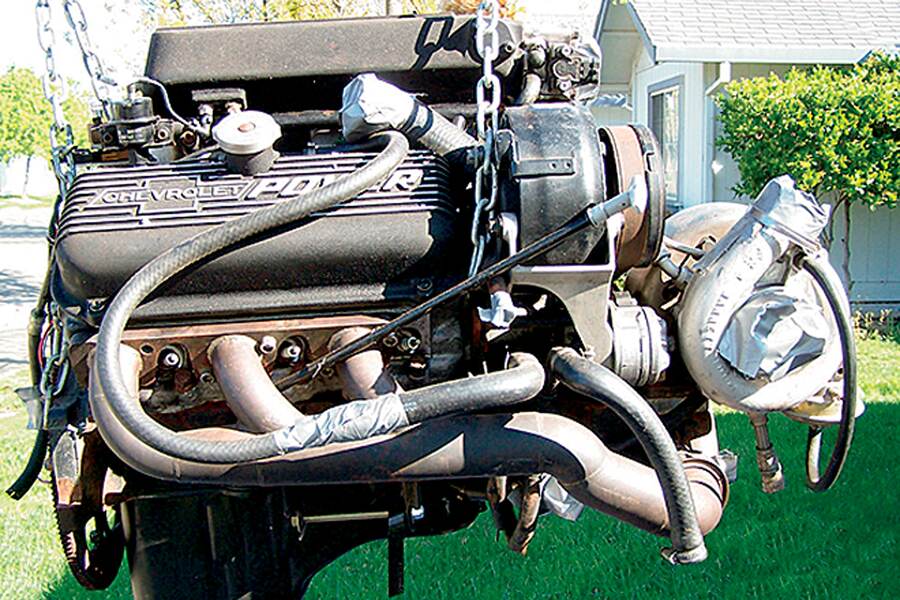 Callaway Picks up the Baton

After killing the factory twin-turbo program, Chevy decided it would be criminal to waste the technology it developed. Enter Reeves Callaway, who at the time had a modest business in Connecticut doing aftermarket turbo conversions. His most recent success had been a low-volume job for Alfa Romeo of America, the 230-hp GTV6.

Chevrolet worked a deal with Callaway Engineering under which new Corvettes would be shipped from Bowling Green to the firm’s facility in the town of Old Lyme, where they would receive a 50-state-legal twin-turbo engine good for 345 (later boosted to 382) horses. The option, which debuted in 1987, carried RPO B2K and an initial price tag of $19,995. As for the 1990 ZR-1 that effectively replaced the original TT, its J55 heavy-duty brakes, 3.54 rear end and manual transmission with additional forward gears were all inspired by those 14 original SVI prototypes.

Following my test drive the Rapid Roadster was sent back to Mesa, where it spent a year or so in Jim Ingle’s powertrain test fleet, partly in support of the B2K program. At the time I drove the car, only 10 of the original TT coupes still existed. Eventually all of them, including the convertible, went to the crusher. Chevy’s in-house turbo Vette might not have made it into production, but its spirit and influence lived on in the high-performance C4s that followed.

Sidebar: Under the Hood

The engines for the twin-turbo Corvette test program were built by SVI, starting with a 5.7-liter short-block Chevrolet used in its medium-duty trucks. Each had a heavy-duty iron block with four-bolt main bearing caps, a forged steel crankshaft, heavy-duty connecting rods, cast aluminum dished pistons and a double-moly ring set. Modifications included an ’85 Corvette camshaft, a big-block oil pump and a double-row timing chain. The engines were blueprinted and used factory balancing.

The cylinder heads on the convertible’s engine were iron pre-’86 Corvette units, but the other 13 engines, because they produced less boost, were fitted with production, ’86-up aluminum units. In both instances, the compression ratio was 8.0:1. The heads were prepared by Diamond Racing Products with intake-port polishing, exhaust porting and polishing, stock valves and, to ensure reliability at 6,000 rpm, 1969 Z/28 “service cam” valve springs.

Whereas first 13 engines had modified ’85 Tuned Port Injection (TPI) systems, the more powerful 14th powerplant—used in Jim Ingle’s 191-mph blue coupe and, later, the yellow convertible—employed a special induction system that flowed more air. It consisted of the base plate from a Holley dual four-barrel intake manifold fitted with Rochester electronic injectors then port-matched to the heads. On top of that was an SVI-fabricated plenum assembly fitted with a modified TPI throttle body and fed by two 70mm mass-airflow sensors. A stock HEI ignition system was installed.

The turbochargers were Mitsubishi TDO5 units. In order to ensure that the engines looked their best, and also to solve a packaging problem, Chevrolet had the Japanese company manufacture 14 TDO5s that were “mirror images” of standard units. This allowed for dedicated “right” and “left” turbos. Mitsu was literal in fulfilling the order. Even the letters “Chevrolet” cast into the compressor housings of the 14 mirror-image turbos were reversed. Between the compressor outlets and the intake manifold was an air-to-air intercooler. The turbos were fitted to two tubular, stainless steel exhaust manifolds made by SVI. The car had custom down pipes, no catalytic converters and stock Corvette mufflers.

SVI’s output figures for the first 13 engines, achieved with 12 pounds boost, were 440 hp at 6,000 rpm and 570 pound-feet of torque at just 3,000 rpm. The last engine had the bigger induction and adjustable wastegates controlled by a knob on the center console. The production ECM used an E-PROM “chip” developed by Chevrolet and SVI, which met the fuel-flow requirements of a twin-turbo engine. Provided 100-octane unleaded racing gas was available, one could close the wastegates fully and see 20 psi of boost. Ingle’s testing in Mesa showed that, at that level, the engine made 550 to 570 horsepower at 6,000 rpm. 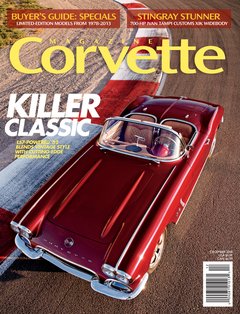