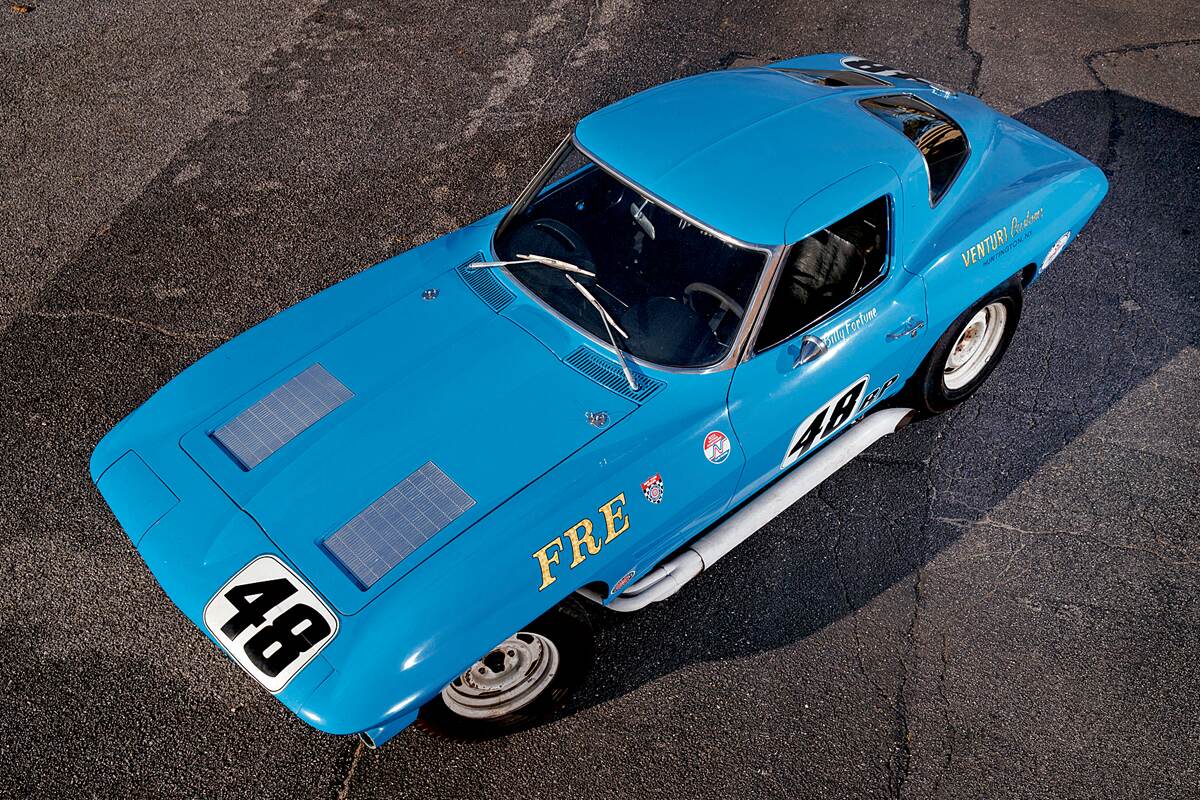 f you look up the word “tenacious” in the dictionary, you’re likely to see a picture of Dr. Bruce Silber alongside the definition. This voracious collector of vintage cars, automobilia, advertising items, antique toys and almost anything else he finds interesting cannot pass a garage sale, estate sale, swap meet or flea market without dipping in for a look. And he always digs beneath the surface to see what interesting things lurk beneath it. Such was the case when he went to a garage sale in Huntington, New York in 2009. The elderly homeowner had several vintage toy cars on offer, and Silber bought them. Over the ensuing months, as the lady came across more antique toys, she contacted Silber and he bought those as well. On the third or fourth visit, he did what he normally does, and asked whether she had anything else car related she’d be interested in selling. “I have my son’s Corvette,” she responded matter-of-factly. “I’ll let you see it, but it’s not for sale.”

Silber had to harness every molecule of self control he possessed when the lady led him into her garage to see the car. It was under a cover, and its silhouette was unmistakably that of a C2 coupe. “I slid my hand over the cover,” Silber tells us, “and felt the split in the back window, and nearly passed out from the thrill of the discovery.” The car was indeed a 1963 “Split-Window” coupe that the lady’s son, the wonderfully named Billy Fortune, had raced in the late 1960s and early 1970s. Tragically, he succumbed to cancer in 1973, but she kept the car in his memory. Sympathetic to her emotions, Silber said if the time ever arrived when she was ready for the car to move on to its next caretaker, he’d appreciate the opportunity to buy it.

Once or twice a year, for the next several years, Silber sent the lady a note reminding her that he was still interested in buying her son’s Corvette. In 2015 he got a phone call from Billy Fortune’s sister, who explained that her mother had passed away, and among her papers was a note that said if she ever decided to sell her brother’s Corvette, she should call Bruce Silber. Although he’d only seen it only very briefly six years prior, and had not looked at it since, Silber quickly reached an agreement to buy the car. When he went to pick it up, he found that the Corvette had not moved even one inch in more than 40 years, but was nevertheless remarkably well preserved. That the car had spent all that time in a dry garage that was attached to the house, and thus had benefited from the effects of the home’s climate-control systems, undoubtedly played a role in keeping it from falling apart. 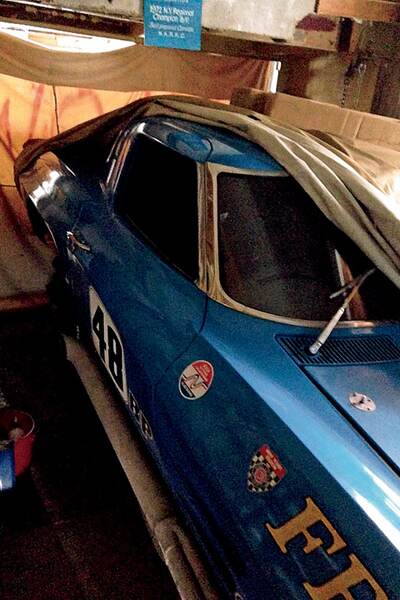 Billy Fortune was a typical, car-crazy boy growing up in suburban New York in the 1960s. He counted down the days until his 17th birthday, which is when he got a full driver’s license. Within a short time, he was able to buy his dream car, a Silver Blue 1963 Corvette coupe. As far as can be determined, this ’63 Corvette was an ordinary car that led an ordinary life for its first few years, and even after Fortune brought it home it still did ordinary things, including take him back and forth to school and work. He even loaned the car to his younger sister so she could take her driving test with it.

While Fortune thoroughly enjoyed driving his Corvette on the street, he harbored a burning desire to go racing with it. He began with eighth-mile and quarter-mile drag racing at National Speedway in Islip, New York. He won six of the nine drag races he entered, clicking off best times of 9.11 seconds at 78.94 mph in the eighth and 13.4 seconds at 106 mph in the quarter. From there, he moved up to time trials and gymkhanas with the Long Island Corvette Owners Association (LICOA) and other local clubs, recording several First and Second Place finishes. In September 1967, he did his first road-racing school with LICOA at Bridgehampton, following that up with another driving school and several time trials at Bridgehampton and Lime Rock Park throughout 1968 and into the spring and summer of ’69. In October of ’69, he did his first race, a 10-lap event at Bridgehampton organized by the Long Island Sports Car Association. He won that event, then won another race the same month, an Eastern Motor Racing Association event at Lime Rock.

With the winds of success filling his sails, Fortune was ready to get more serious about his road racing, and to that end he took his Corvette to Speedwin Automotive Engineering in Hauppauge, New York, one of the country’s foremost race-engine building facilities. Joe Jill, the former owner of Speedwin (and now the owner of Superior Automotive Engineering in Placentia, California), remembers Fortune fondly. “He was a very nice young man,” Jill remembers, “who loved cars and working on cars. And he was a very talented driver. We built him a fuel-injected 327 and did a little bit of chassis work for him, including installing Koni shocks. He raced a lot, so we had the car on our chassis dyno every few weeks during the season to keep it tuned.” 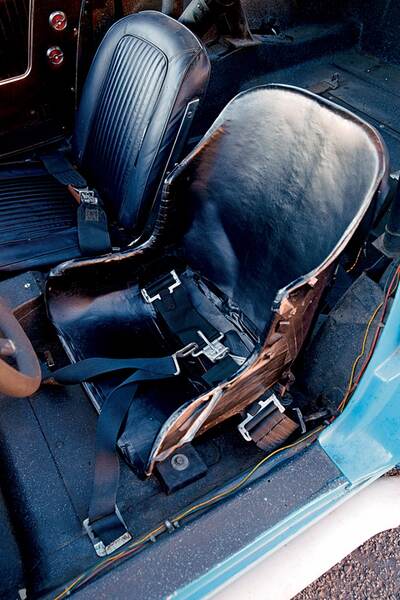 The engine Speedwin built, which remains in the car, benefited from a long list of old-school blueprinting techniques, including micro-polishing the forged crankshaft’s bearing surfaces, shot-peening and diamond-boring the forged rods, porting and polishing the heads, and balancing the reciprocating assembly to within one-quarter of a gram. The Rochester fuel-injection setup was modified to deliver adequate fuel to the engine all the way up to 8,500 rpm. A re-curved Delco FI distributor lit the fire, and a high-pressure Melling oil pump inside a baffled 7-quart pan kept things lubricated in racing conditions. When finished, this engine produced a little over 450 horsepower at 8,000 rpm, quite a bit more than the stock L84’s 360 hp.

The race-prepped engine was backed up with a number of ancillary performance parts typical of the era, including a Schiefer clutch and lightweight flywheel, a Lakewood bellhousing, Kustom headers and side pipes, and Aeroquip braided stainless-steel lines. The car’s original transmission and shifter gave way to a 1969 Muncie M22 “Rock Crusher” and Hurst shifter, and the original rear end was replaced with a ’69 heavy-duty 4.11 Posi rear.

In addition to the engine and drivetrain upgrades, and the switch to Koni racing shocks, a few chassis modifications were carried out. A larger anti-sway bar with solid center mounts and heim-jointed end links replaced the factory items front, a big-block–type anti-sway bar was fitted in the rear, and F41 heavy-duty springs were installed all around. A four-point roll bar, which was mandated by the SCCA and other sanctioning organizations, was welded to the chassis, and Corvette’s highly effective 1965-and-newer Delco four-wheel disc brake setup replaced the Split-Window’s original drum system. 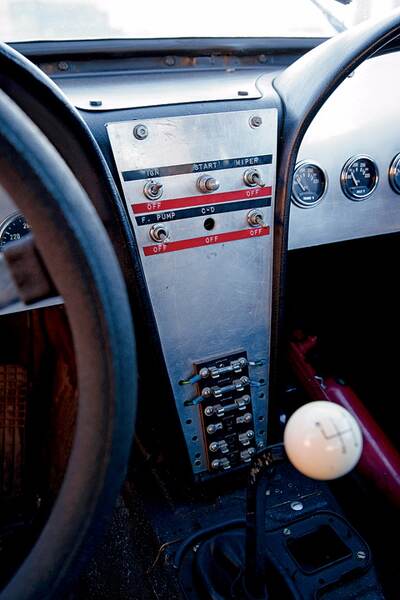 In order to get the car’s weight down, Fortune stripped the interior of almost everything that wasn’t essential. He replaced the original instruments with a full array of Stewart Warner gauges to keep track of everything the factory gauges monitored, then added supplementary gauges for transmission-oil, engine-oil and axle-oil temperatures, as well as manifold pressure. On the center stack, where the factory clock and radio normally go, he bolted an aluminum plate and then installed an array of switches, buttons and exposed fuses to control all of the car’s electrical functions.

For a fairly extensive exterior makeover, Fortune turned his car over to Venturi Customs in Huntington, New York. After stripping the paint and all exterior trim items, Venturi smoothed the body to remove the holes and other provisions used for mounting the bumpers. The Venturi crew also molded the exhaust filler panel, which is normally bolted on, into the body, and recessed the tail lamps into the body while eliminating the chrome lamp housings. Once the modifications were complete and the body’s surface was prepped, they painted the car in the somewhat unusual and non-stock shade of blue it still wears to this day.

With his car operating perfectly and looking the part, Fortune hit the northeast racing circuit at full speed in 1972. He competed at Bridgehampton, Lime Rock Park, Thompson Speedway, Watkins Glen International, Bryar Motorsports Park and various other venues, and by season’s end he had earned both the SCCA New York Region B/Production title and the North Atlantic Road Racing Championship. He was also designated the SCCA Rookie of the Year. 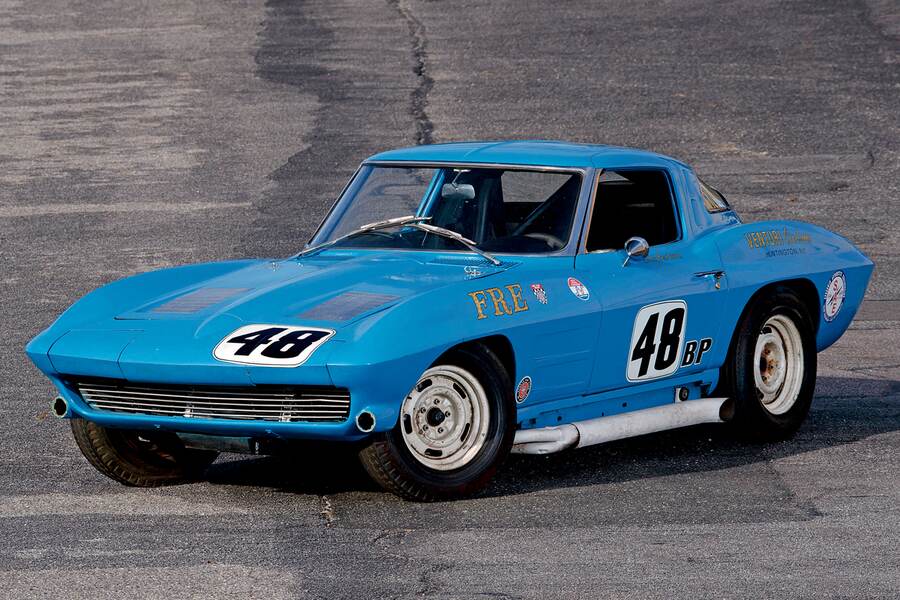 Fortune was elated with his record of accomplishment in 1972, and looking forward to even more success in the coming season, but this joy was suddenly extinguished by terrible news from his doctor. “He’d been having some medical issues,” Joe Jill remembers, “and said he was going into the hospital for testing. A short time later, he was gone. It all happened very fast, and of course it was very, very sad. He was so young.”

Following Fortune’s death, his parents asked Jill if he would display the Corvette in his showroom in honor of their son, and naturally he agreed to do so. After about two years, they brought it back to their house and put it in the garage, where it remained until Silber brought it out into the light of day for the first time in over 40 years.

“I’ve managed to find a lot of very rare cars over the years,” Silber reflects, “but none have enjoyed a history quite as interesting as this one. For me, the hunt is a huge part of the enjoyment I get from the hobby, and I’ll always keep looking for the next great one. But I seriously doubt I’ll ever find another Corvette that will top Billy Fortune’s amazing Split-Window coupe.” 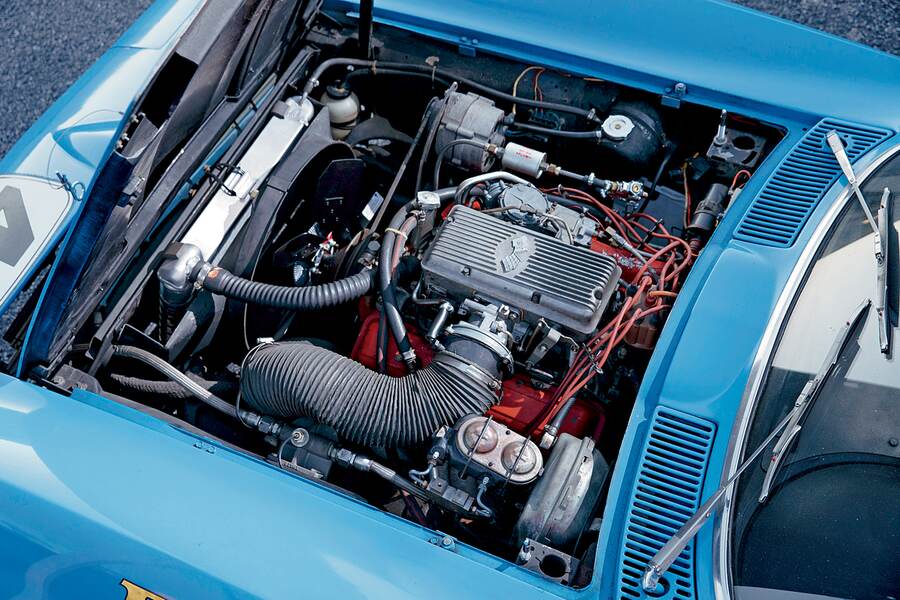 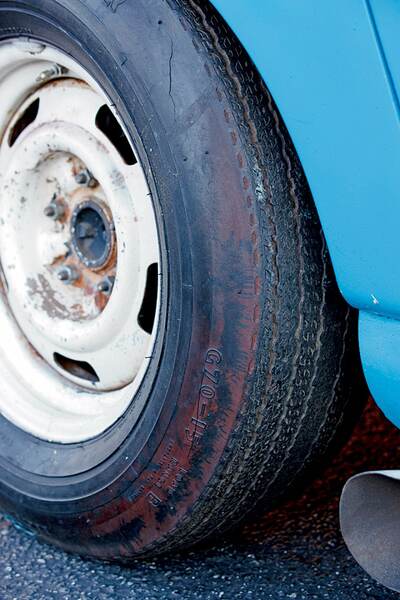 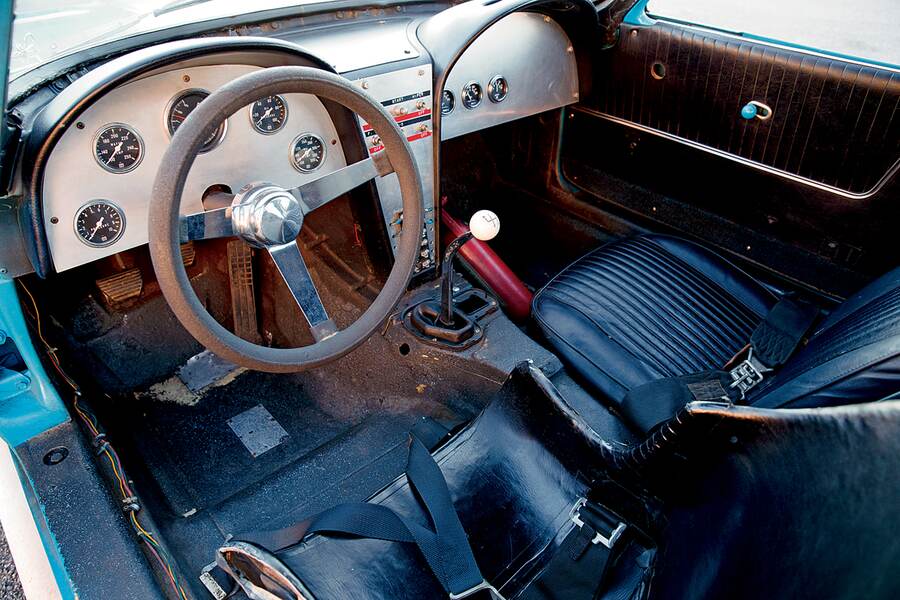 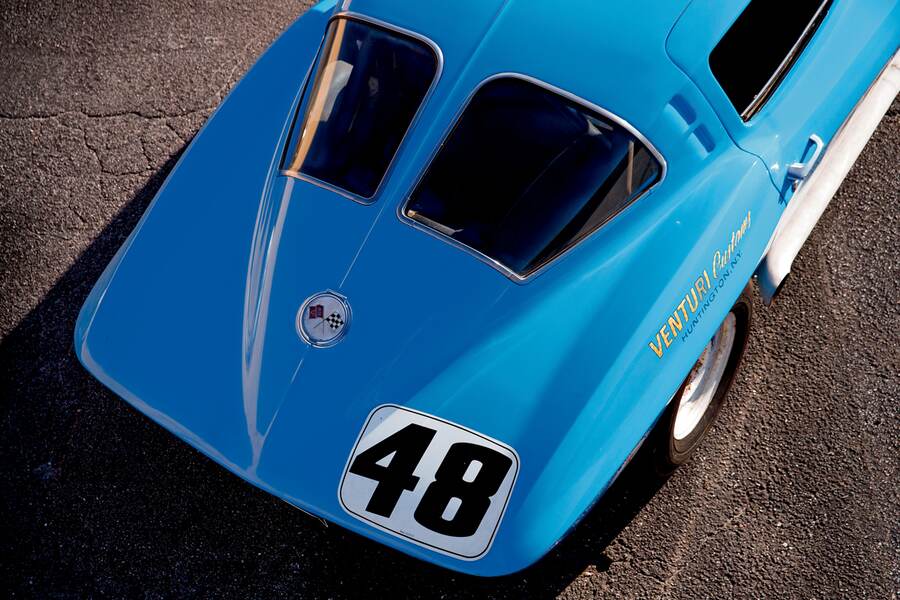 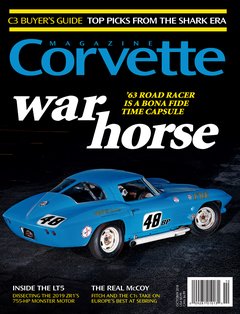