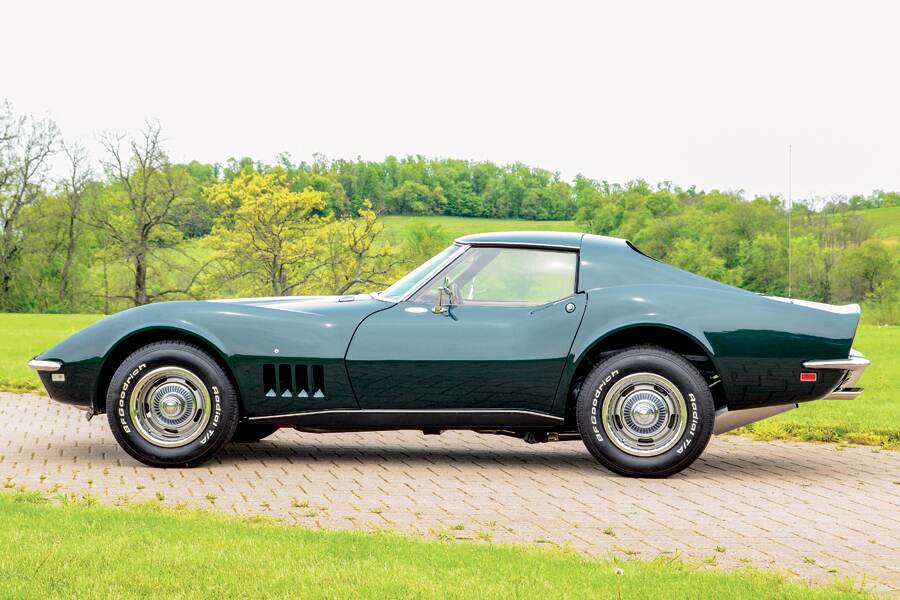 Much has been written about the sea change in body style from the crisp C2 Stingray to the curvaceous ’68 C3 shape. Famed designer Larry Shinoda’s Mako Shark II concept—which wowed the public with its tumescent fenders and jet-fighter cockpit—was influential in the genesis of the new form. Engineering chief Zora Arkus-Duntov did not care for the change, though, preferring a more streamlined body (even though the C3’s aerodynamics were about the same as the C1’s). But GM Styling VP Bill Mitchell’s insistence on a more market-driven design ultimately won out.

Mitchell, who’d previously clashed with Duntov over the “split-window” configuration of the ’63 coupe, loved to make cars look aerodynamic, even if they weren’t in reality. Ultimately, the C3’s coke-bottle curves were a victory of Mitchell over Duntov, of style over substance. Despite its flaws, which included an alarming propensity for front-end lift at high speed, the third-generation Corvette sold remarkably well over the course of its lengthy production cycle.

Oddly enough, the C3’s fresh look leaked out several weeks ahead of schedule in the form of a Mattel Hot Wheels die-cast model car. But even more surprising is one particular ’68 Corvette that was built in April of 1967, well ahead of the typical new model-year introduction in the fall. This car would prove to be the missing link between these two eras of Corvette design. That’s because it had the new ’68 C3 body forced onto a C2 chassis. 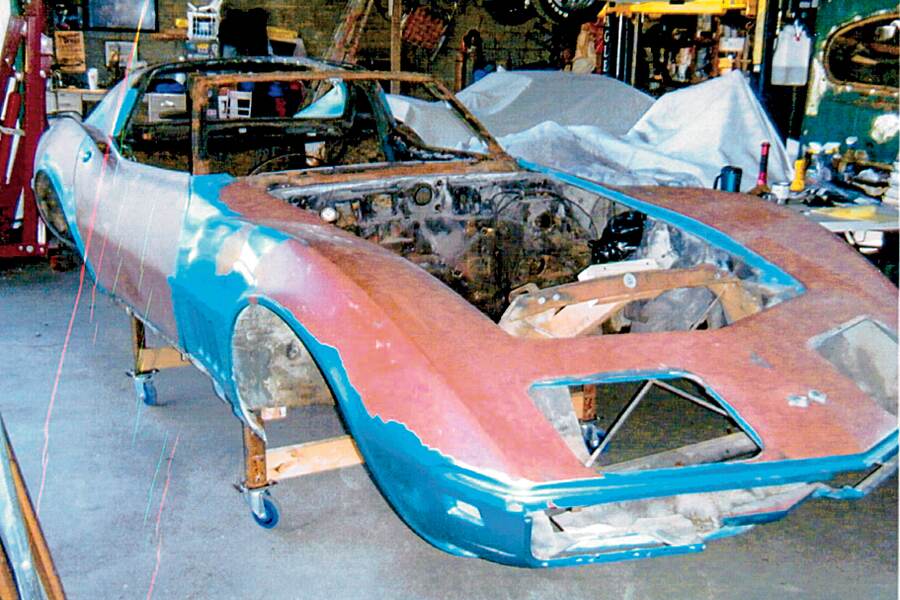 When former Bowling Green Assembly Plant Manager Wil Cooksey saw this C2/C3 “hybrid,” he reportedly speculated that it was built to show GM execs what the new design would look like. But he also wondered how it ever left the St. Louis factory, as it didn’t have a serial number on the frame and should therefore have been crushed into oblivion. (During restoration, a VIN was discovered on the windshield post.)

Yet somehow this “neither fish nor fowl” prototype escaped from the jaws of death and was shipped from St. Louis to Haley’s Chevrolet dealership in Nebraska City, Nebraska. Owner “Hell” Haley was known for his hell-raising antics, along with an unusual collection of Corvettes that he road-raced on his goat farm, where he had built an improvised track. Following a fire at the dealership, he moved to Arizona, taking the ’67/’68 Corvette with him. How it ended up in Pennsylvania is another “missing link” in this mysterious tale. Later on, uncovering the confusing identity of the car took some careful detective work by veteran restorer M.J. “Junior” Redden. First, though, a bit of background on how current owner Ralph Collins Sr. came to possess the car.

A Different Kind of Hybrid 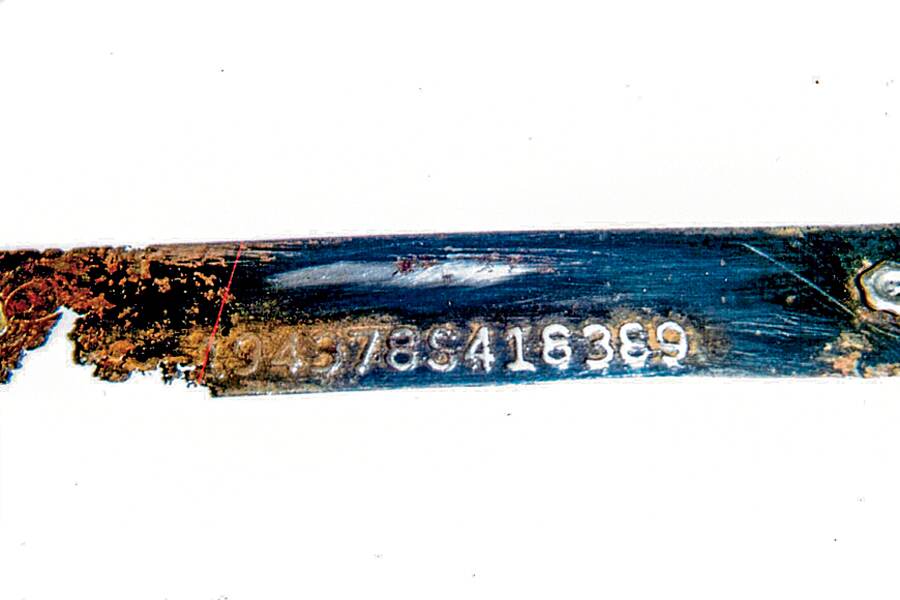 At the age of 19, Collins purchased his first Corvette, a ’69 convertible. But less than two years later, he had to sell it in order to invest in a farm with his father. Like many seasoned Corvette owners in similar circumstances, he found parting ways with his beloved convertible to be a heartbreaking experience, “One of the hardest things I ever had to do,” he admits. Yet long-time disappointment would later fuel a surprising project.

As life got in the way, with Collins raising a family and running a meat-packing company, he figured he’d never own another Corvette. But one day his son-in-law asked him to store a ’68 coupe he’d acquired from his boss. Turns out the car had been kept in several different barns by a few different owners, and consequently suffered from disuse. A few years later Collins was presented with a chance to acquire the Vette, and he didn’t hesitate to accept the offer. But after buying the car for $6,500 in 2005, another five years went by before he would begin restoring it. That’s when he crossed paths with Redden at a car show in Pittsburgh, Pennsylvania.

Having admired the paint job on Redden’s wife Sandy’s personal ’75 Corvette (itself a multi-trophy winner), Collins eventually decided to have him handle the resurrection. This expression is apt, as Collins’ wife Kay was shocked by his plans to bring the car “back from the grave,” given its dilapidated state. When Redden began dismantling the car, though, he came across a number of puzzling details. The original factory white tape, used to keep the body mounts aligned, was still in place, so this was obviously not a re-bodied chassis (even though it was clearly a C2 unit, as indicated by absence of the “kick-up” braces on the frame behind the seats.) “That’s when we knew we had a ’67,” he recalls. 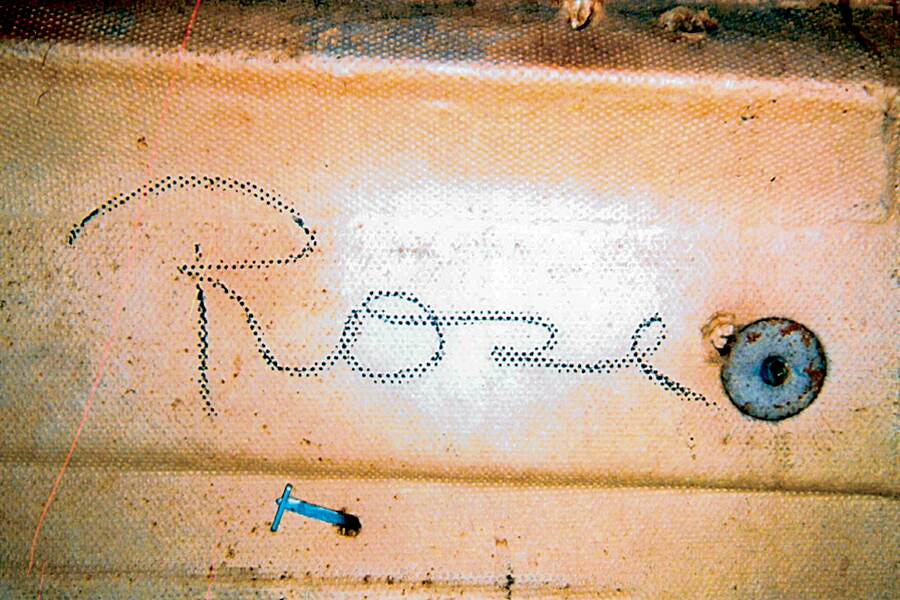 Other discrepancies included a welded-in cross-member for the transmission, as opposed to the bolted-in piece used on the ’68 model. The plot thickened from there. But Redden first asked Collins if was sure that he wanted to proceed with the restoration, as it would take a lot of time and money to make it happen. Collins insisted, still aching for the Corvette of his youth. Redden ordered fuel and brake lines for a ’68 model, only to find they didn’t fit. Realizing the frame was definitely that of a ’67 Corvette, he obtained lines for that model-year chassis, and they fit just right.

In addition, Redden discovered that the plate supporting the tachometer and speedometer was split. Assuming that it had been broken at some point, he repaired the piece, only to find that the steering column wouldn’t go in properly. So, he had to crack the plate in two, as he had found it, in order to reinstall the column. Even then, the steering wheel sits way down on the driver’s lap, making it difficult to enter or exit the car.

Other ’67-era components on the numbers-matching 427-cubic-inch, 390-horsepower engine include the intake manifold and carburetor, along with the heads and exhaust manifolds—the latter hard-to-find items. The four-speed Muncie close-ratio transmission and rear end are correct for the build date of 1967 (even though the car wasn’t titled until May of 1968). Lastly, and a bit more troublesome, “The doggone fiber-optic wiring was all ’67 stuff,” Redden gripes. 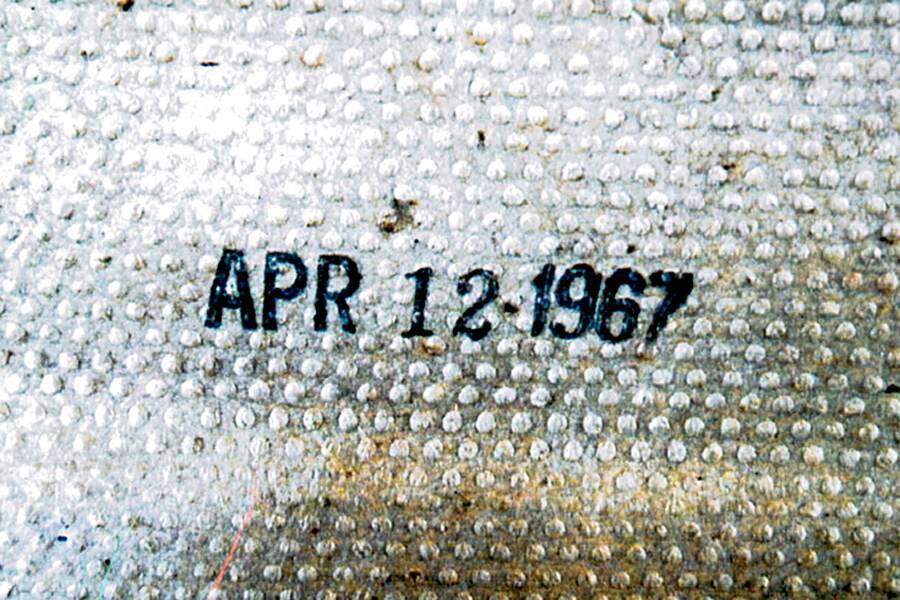 Another clue to the car’s unique year of origin was the trim tag, which identified the interior color as saddle. In 1968, this shade was called tobacco instead. Additionally, during the rebuild process, Redden discovered that a factory worker had signed the name “Rose” inside of one of the car’s door panels. Such signatures typically aren’t present in regular-production Corvettes—Redden has restored enough Vettes of this vintage to know— further bolstering the idea that Collins’ car was a significant custom build.

All these discrepancies had Bloomington Gold judges scratching their heads and criticizing the car as “not a true ’68.” For instance, it had a Holley four-barrel carb instead of the Rochester Quadrajet unit introduced that year. The head judge attempted to settle the matter by referring it as a Central Office Production Order, or COPO, car. (These were specially equipped vehicles built in limited quantities by GM, typically for fleet use but also to create high-performance cars like the legendary ZL1 Camaros.)

All this quibbling and hair-splitting matters little to Ralph Collins. His response to uncovering this missing link? “He was ecstatic,” Redden relates. “He knew he had a very special car—one of one.” 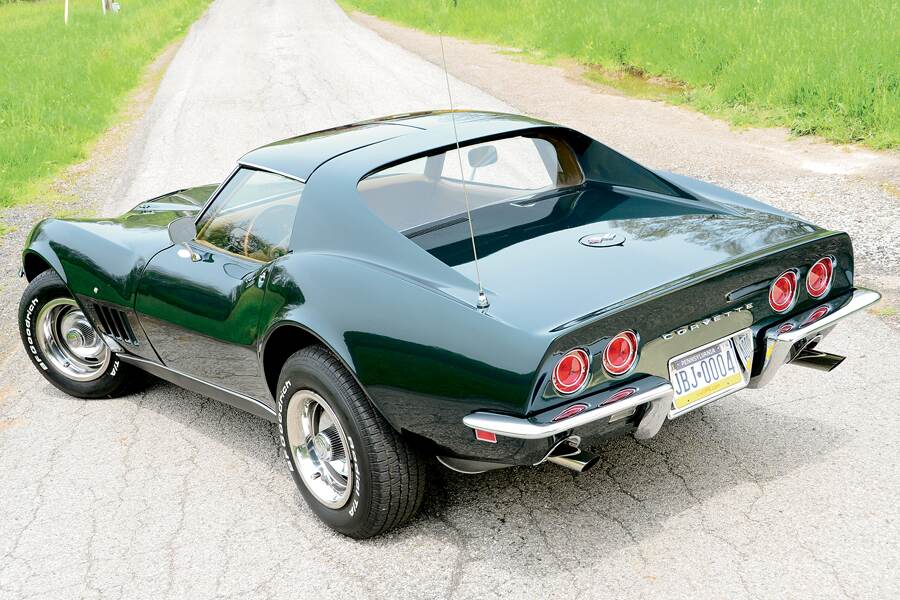 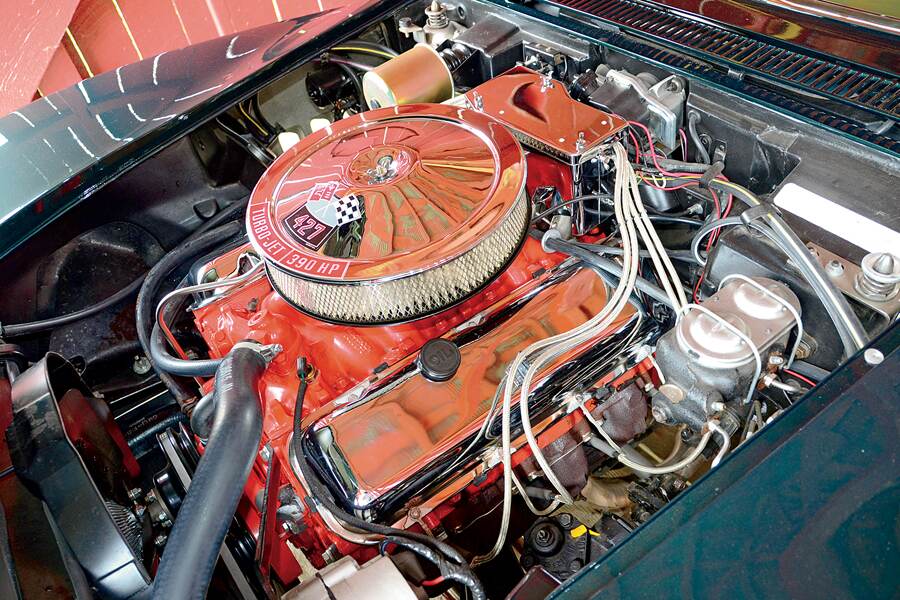 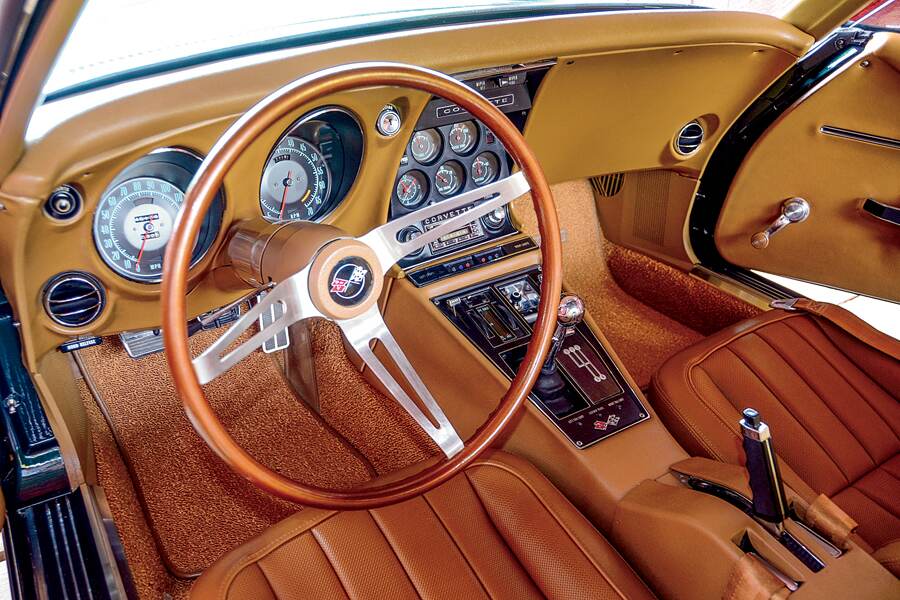 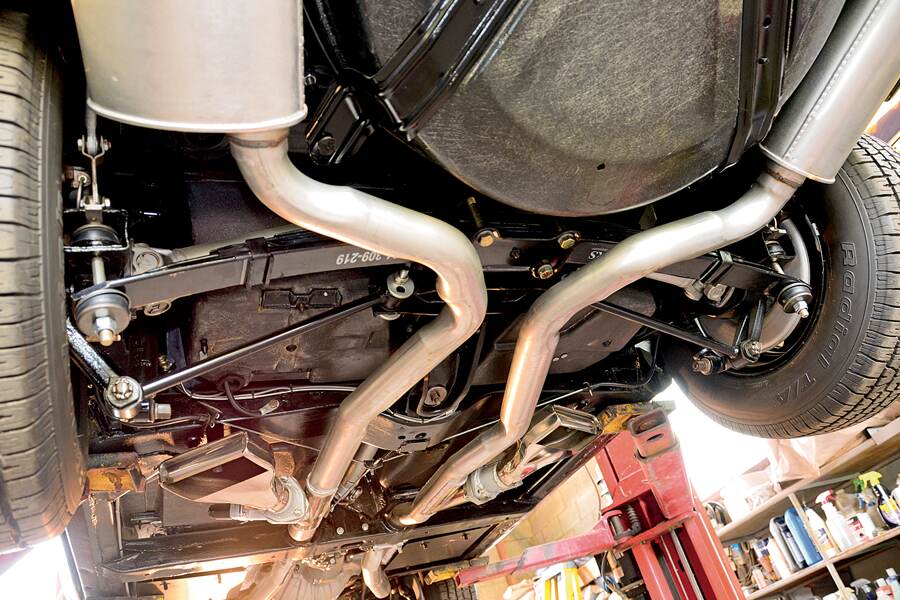 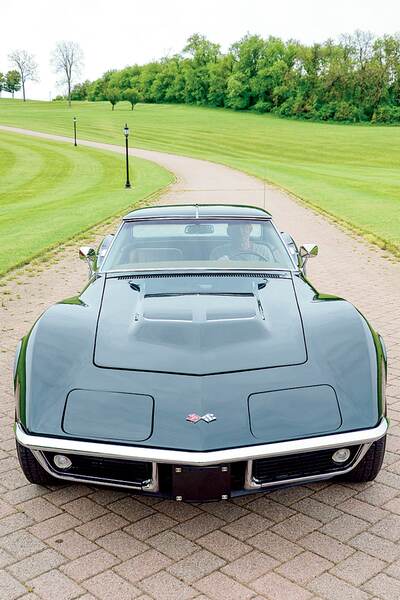 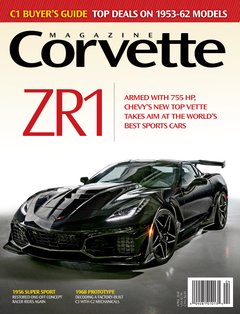