An abandoned ‘57 sees new life as a technologically innovative cruiser 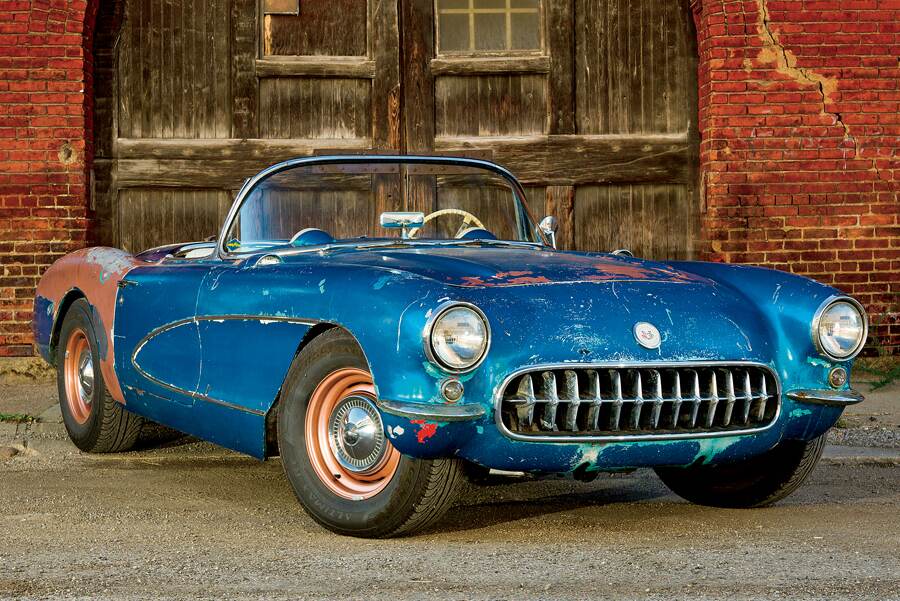 Anyone who has taken a car to be serviced recently knows how expensive repairs have become, with labor costs often exceeding the price of the parts themselves. This is especially true with late-model Corvettes, whose shop visits regularly run up bills of the four- or even five-figure variety. It’s a price most marque devotees are initially willing to pay in exchange for the extreme performance these technologically advanced machines provide, but that willingness tends to recede over time.

As a case in point, imagine being charged $1,400 for repairs on an already old Corvette in the mid-1970s. In 1974, that’s the amount John Drahos quoted the owner of the ’57 model shown here. Putting that sum into perspective, the base price of a new C3 ranged from about $5,700 to a shade over $6,000 that year, so spending that much money on a beater C1 was probably not the most prudent decision from a purely economical standpoint. But that’s exactly what the owner agreed to do.

Drahos set up his shop, Corvette Conspiracy, in the Cleveland area in 1970, and as the name implies it was geared exclusively towards the Corvette community. After a few years in business, Drahos had built up a loyal customer base that ensured a steady flow of work through the shop. Much of that work came as a result of word-of-mouth advertising, which is what landed this ’57 on his doorstep. “The owner bought it from a dealer here in Cleveland, who had taken [it and] a ’54 in on a trade for a new car,” Drahos recalls. “This guy had bought both of them.” 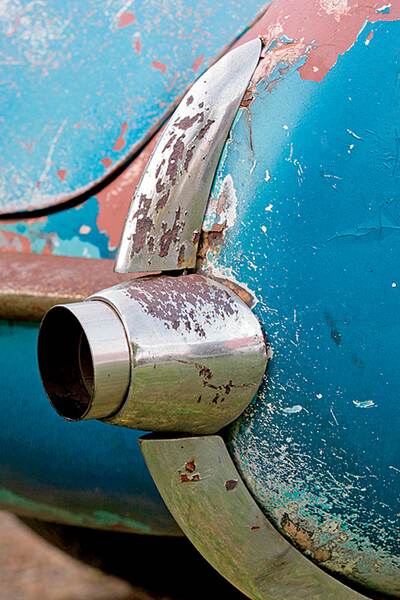 This C1 was, according to Drahos, a driver with decent paint and new white top when it came into the shop, but it wasn’t without its flaws. At some point, it had been repainted in a generic shade of blue, and the original engine was long gone, replaced by a ’61 283. Mechanically, it was in need of repairs, and the owner also had a laundry list of modifications he wanted to have done. On that list was the installation of a Carter four-barrel carburetor and manifold, a four-speed trans, new shocks, rear springs, brakes at all four corners and a removable hardtop. It took Drahos and his crew a few weeks to get all the repairs and alterations done to the point that he was ready to send the bill. Unfortunately, the owner was nowhere to be found. Attempts to collect payment started with phone calls, which then led to registered letters. “I had been in business for four years,” he explains. “I was thinking, this guy is eventually going come and pick up his car—he’s not just going to abandon it.” All the while, the ’57 continued to sit.

Drahos continued to play his part as a conscientious business owner by storing the Corvette inside the shop with the hope that the fellow would eventually show up and pay his bill. That generosity only lasted for a few months. Business was booming, and shop space was at a premium, so the decision was made to store the car outside. Not surprisingly, that move had a profound impact on its appearance. For the next six years, the harsh Cleveland winters and brutally hot summers ravaged the Corvette’s body, abetted by the neighborhood kids who habitually lobbed rocks at it. The car’s stint outside could best be described as a “patina builder,” since most of the exterior damage you see today took place during that time.

A new chapter in the Corvette’s life commenced in 1980, when Drahos moved into a larger shop. Rather than having it take up precious real estate at the new place, he towed the car to his house and parked it in a storage barn, where it was pretty much forgotten for the next 14 years. While this next episode slowed the body’s deterioration, it actually ramped up the decline in some of the car’s other areas. The engine bay, interior and top, for example, quickly became a new living space for rodents. 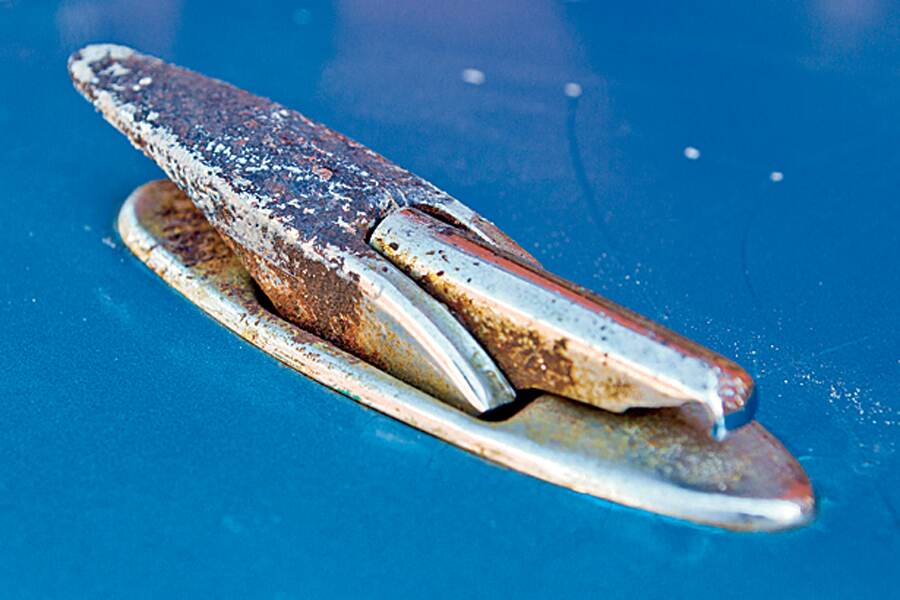 In 1994 Drahos decided to move to a larger house, which forced him to transport the Corvette back to his shop, where it was parked for another 14 years. “It was like a piece of furniture you walked by every day,” he says. “For all those years it sat there like a fixture, and people would just put stuff on it. It became a table for equipment, and if a hood or some other part came off of another Corvette, we would often lay it on top of it. Someone even sprayed parts on it, as evidenced by the overspray outlines on the trunk.” The car also shed a few mechanical pieces over the years, most notably the four-speed that had been installed back in 1974. It was pulled when another Corvette came into the shop in need of a gearbox, after which Drahos dropped another three-speed in the ’57.

While the ’57 was useful as a workbench, dwindling work space once again became an issue. Business was growing, Drahos was eager set up his own machine shop and the Corvette’s long-term parking space looked to be the best spot for the new addition. Before having the car hauled to a storage building, he had one of his employees wash off all the years of accumulated dirt and grime. As a long shot, he even had a battery installed to see if there was still some life left in the electrical system. To his surprise, everything on the car worked. Not so surprising was that the engine didn’t turn over.

“We took all the spark plugs out and used a bore scope to have a look,” Drahos recalls. “Six of the eight cylinders were OK, and two were rusty. I sprayed all the cylinders with BP Blaster and let it sit for a few hours. We then put it in gear and rocked it back and forth in the middle of the shop until it started to turn over.” That small success led him to take the extra step of sorting out the fuel system before making another attempt. 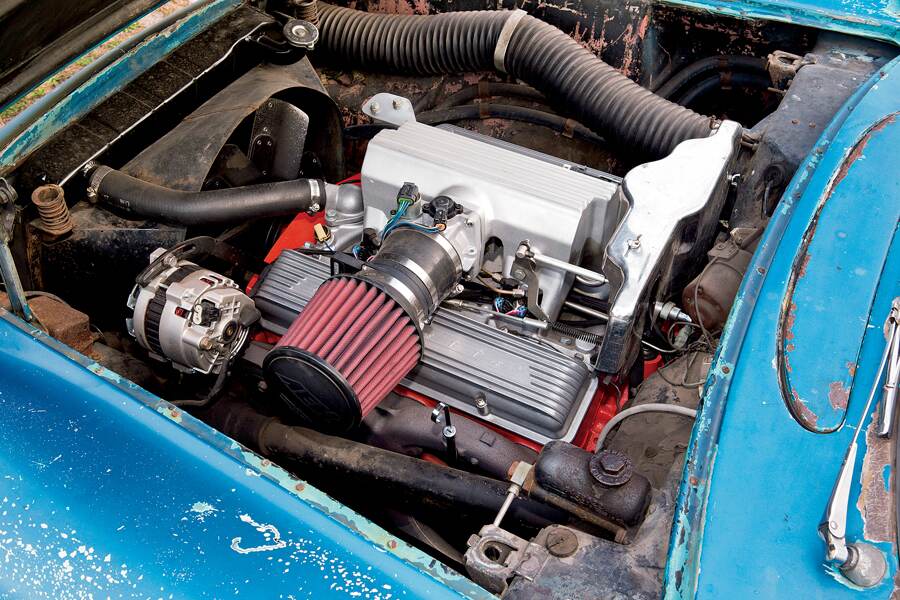 “It turned over for about a minute until it finally came to life,” Drahos reports. “It had some lifter tick, but that went away after a short time at idle.” After all those years sitting dormant, the ’57 could once again move under its own power—but it couldn’t stop. Much like the fuel system, the master cylinder, wheel cylinders and brake hoses were shot and in need of replacement. After an overhaul of the brakes, the car was once again operable. And since it was by then clear that no one was going to show up and pay the bill, Drahos decided to have ownership legally transferred to himself. The long-suffering ’57 was a driver once again.

And drive it is exactly what Drahos did, racking up more than 10,000 miles over the next four years. Incredibly, he experienced no major issues during this span, which included trips to Corvettes at Carlisle, Goodguys events and numerous local shows and cruise nights. The ’57 became somewhat of a local celebrity in the process, bringing a great deal of exposure for Drahos’ shop. As sad as it looked, the old Corvette was proving to be a pleasure to drive and a real conversation piece, so Drahos decided that it needed a little more excitement under the hood.

His goal was to build something that looked period correct, but with modern fuel injection and electronic fuel management. A rummage through the shop inventory unearthed a set of ’57-vintage heads and a block for the new powerplant. Starting with the bottom end, Drahos had a custom set of Wiseco 10.5:1 pistons made for use with 6-inch rods, which bumped the small-block’s displacement up to 288 cubic inches. He also installed an L98 camshaft and roller rocker arms. The entire balanced and blueprinted assembly was done in-house. 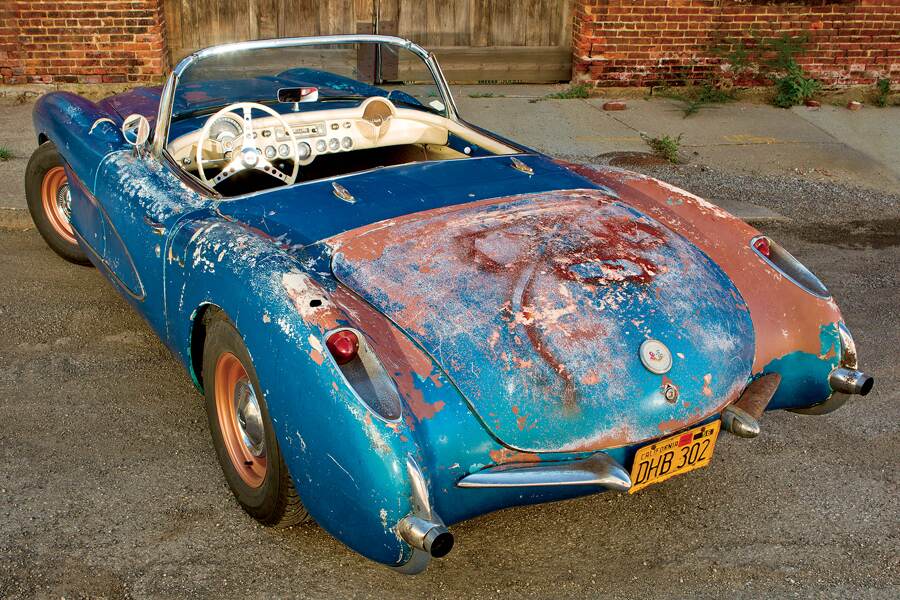 While that part of the build was fairly straightforward, the top end would showcase Corvette Conspiracy’s fabrication capabilities. Drahos’ goal was to clone a Rochester Fuel Injection unit and operate it with a modern LS engine computer. Starting with an Edelbrock Proram manifold, the Corvette Conspiracy team cut it apart and built up the air box to mimic an original Rochester unit, but with an LS throttle body instead of an air meter.

The engine would also receive a distributor-based optical trigger system that Drahos had been toying with for a number of years. The system utilized a trigger wheel inside a distributor housing that contained two optical pickups keyed to the same degree as a crank sensor on an LS engine. Instead of relying on a crank-and-cam setup, timing was achieved by running the distributor directly off of the camshaft to spark the coil-on-plug ignition. Finally, since the engine was out of the car, Drahos had another dig through his stash of parts and pulled out a period-correct Borg Warner three-speed that was freshened up prior to installation.

Beyond the powertrain refurbishment, the interior was also in need of attention. Barn life hadn’t been kind to the cloth top and seats over the years, so those were replaced. Larger wheels with a custom offset where also on the list. Drahos had Wheel Vintiques fabricate a set for him that would allow the use of a larger radial tire while maintaining the period correct look. The custom rollers measure 15×6 inches up front and 15×7 in the rear. 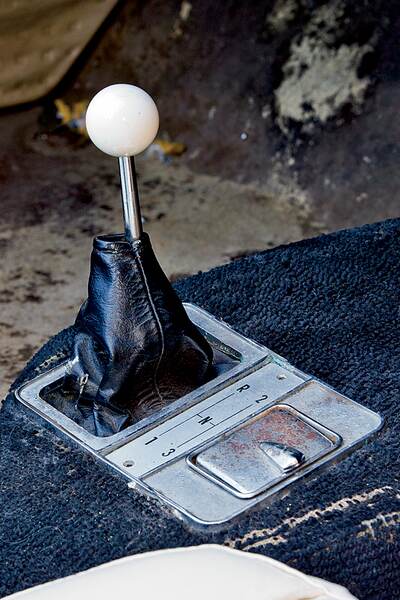 At this point you might be wondering what color this Corvette was when it rolled off the St. Louis assembly line. After all, depending on what part of the body you look at, you’ll see spots that appear to have been painted Venetian Red or Cascade Green at some point. While those would be the obvious choices, the wheels are actually the correct shade for the car: It was originally painted Aztec Copper with a beige top and interior.

You might also reasonably ask why Drahos hasn’t restored the car. It’s a question he’s fielded many times, and one he’s quick to answer: “It took me 43 years to get it to look this good!” he says of the piebald ’57. “We go to all these shows, and this car gets so many more looks than the restored cars because it’s something that people don’t [usually] see. If I restored it and put it in a line with other ’57s, it would be just another restored ’57. If I put this in the middle of that line, [it’s] the one that is going to stand out.”

In the last few years Drahos has been faced with fresh dilemma involving ownership of the ’57. It seems daughter Sara, who grew up around the shop, developed an affinity for the car during its workbench days. Drahos promised to fix up the car and make it hers when she graduated from college, a promise Sara naturally did not forget. Now father and daughter have to fight it out for the keys when it comes to hitting the local shows and cruise nights—quite a turnaround for this onetime castoff of a Corvette. 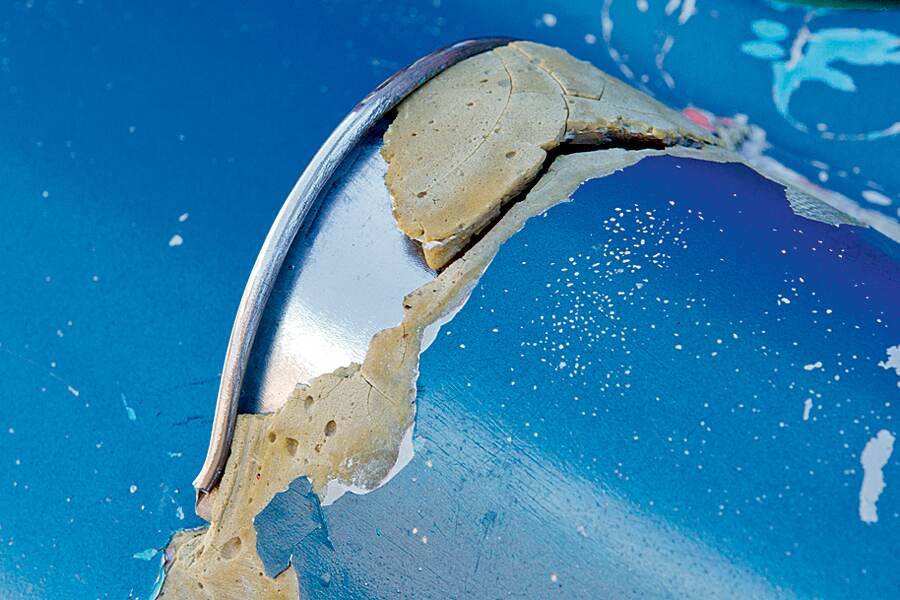 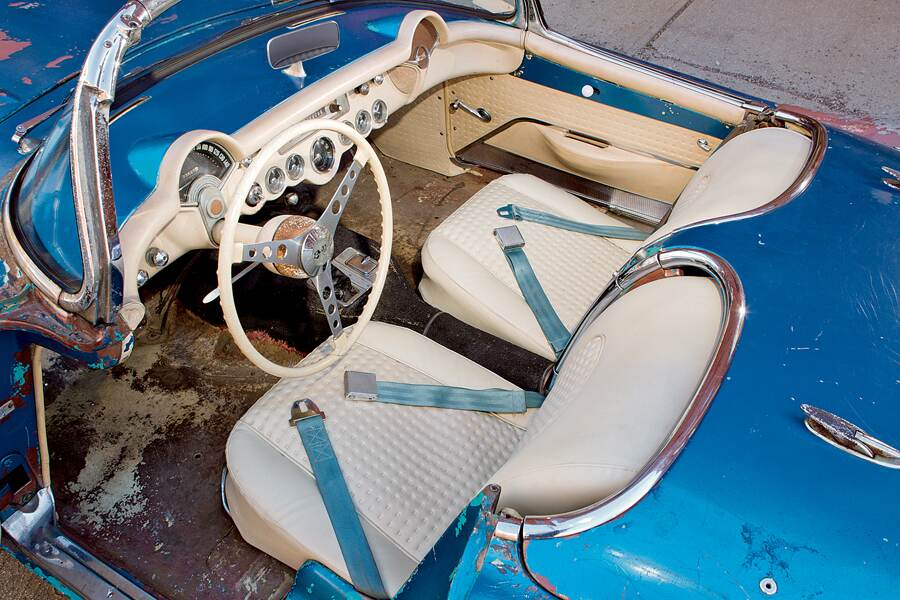 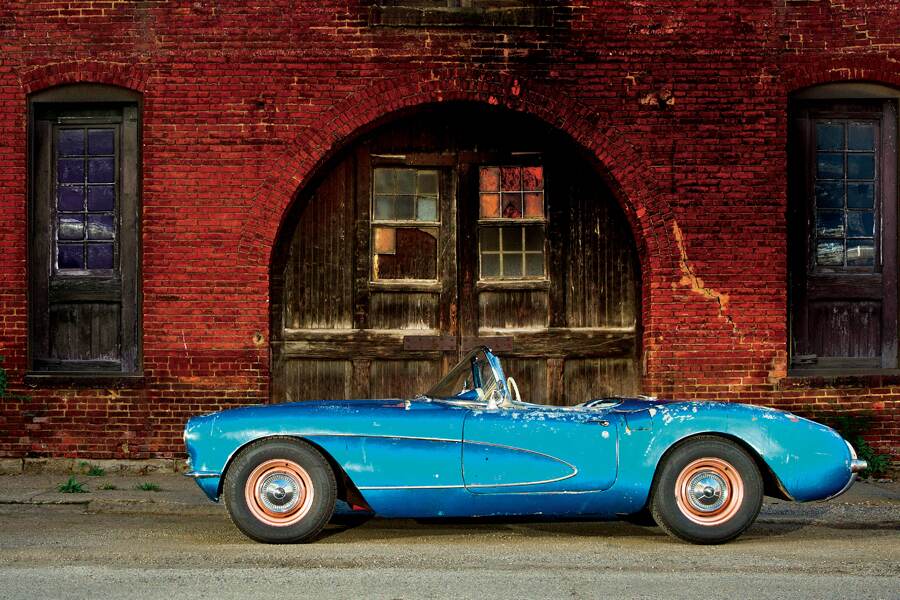 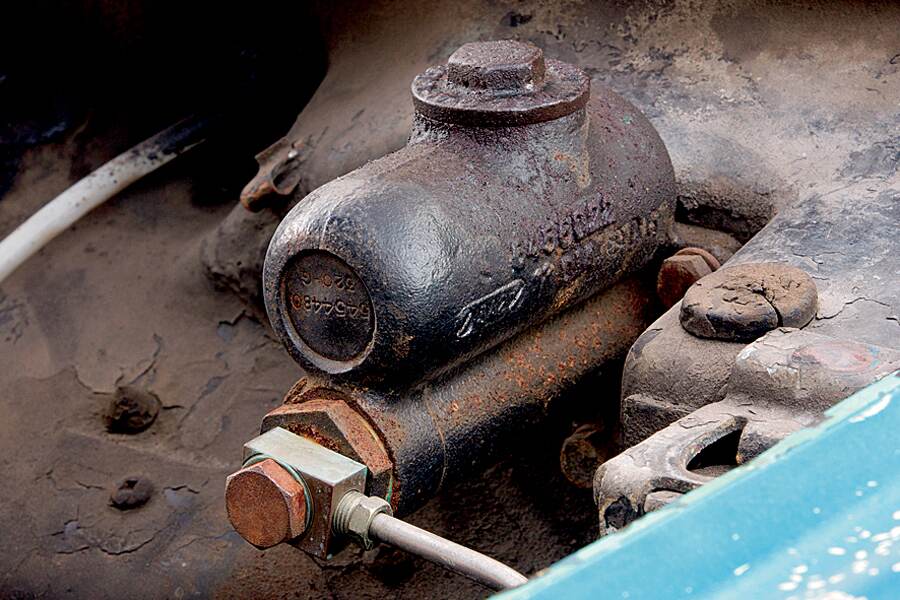 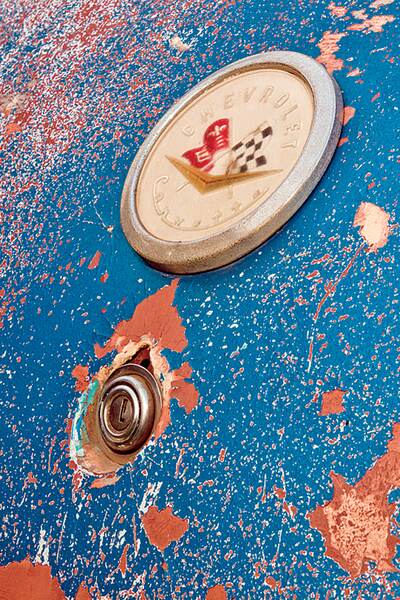 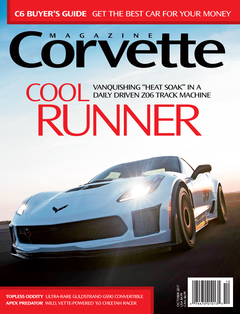