This Nowicki Autosport Concept7 packs a 416-cube engine and no supercharger, thank you very much 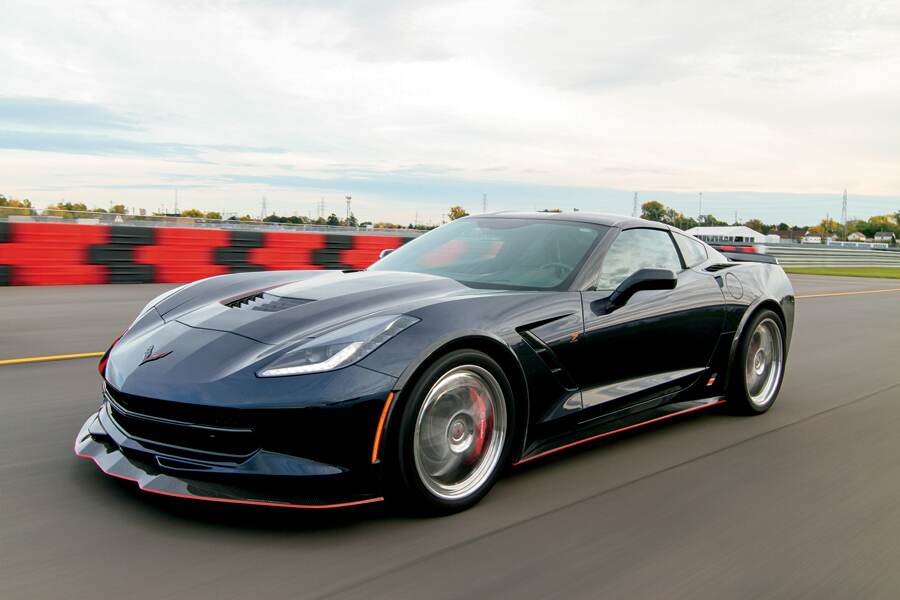 Cats versus dogs. Mary Ann versus Ginger. Black licorice versus that red stuff. We’ve all got our preferences, and for some nothing beats the visceral thrill of a positive-displacement supercharger and the sledgehammer application of power it offers at the very twitch of the throttle.

On the other side of the paddock is the natural-aspiration camp. For them, the more measured run-up in horsepower, delivered through a crisply tuned, deep-breathing combination drawing breath on its own terms, is the only way to go. In our experience there’s no middle ground. You’re either for forced induction or you’re not—just like your wife’s preference for Chip and Joanna over Tarek and Christina. Ask her, and she’ll tell you in no uncertain terms.

You can count David Woodbury as a card-carrying member of the Natural Aspiration Society. The Little Rock, Arkansas resident firmly eschewed the blower idea when it came to pumping up the output of his 2015 Stingray. 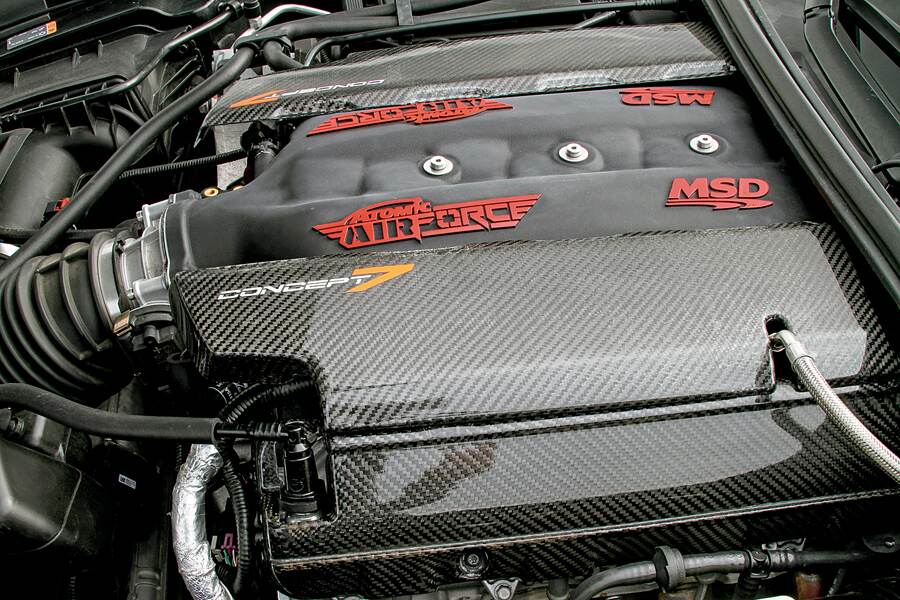 “Blowers are all well and good, but heat soak is a real issue, especially on the track, and there’s a front-end weight penalty that comes with them, too,” he says. “That’s not to say they’re not effective, but I prefer a naturally aspirated engine, even if it doesn’t make quite as much horsepower as you could achieve with a supercharger.”

Engine output these days is a subjective thing, with advances in tuning enabling some truly astounding power ratings in honest, drive-it-to-work Corvettes, especially with turbos and, yes, superchargers. That’s not to say naturally aspirated engines have been figuratively or literally sucking wind. The 640-horsepower/595-pound-foot dyno ratings for the Nowicki Autosport–built LT1 in Woodbury’s car nearly matches the 650-hp output of the C7 Z06’s supercharged LT4, and it eclipses that of the C6 ZR1’s vaunted LS9.

This eyebrow-raising achievement was made possible largely by replacing the original 3.62-inch-stroke crankshaft with a 4.125-inch Callies Dragonslayer unit, which pushed displacement from 376 cubic inches to 416. It was complemented with a special-grind Comp Cams camshaft—the specs of which are more closely guarded than Jay Leno’s denim-shirt collection—to make the most of the engine’s newfound air-pumping capability. (For customers who prefer to retain the LT1’s factory displacement, Nowicki offers a head-and-cam setup rated at still-formidable 612 hp and 531 lb-ft.) 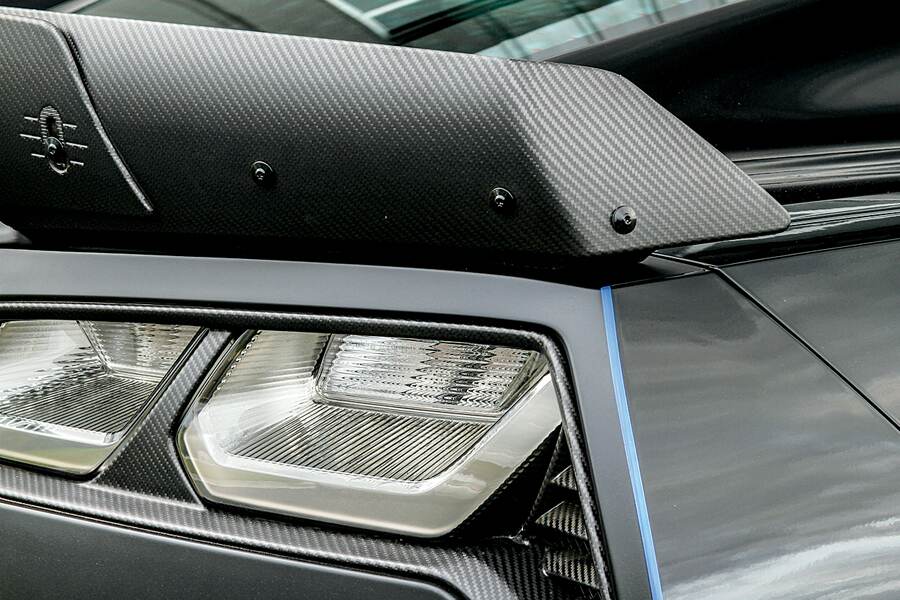 There’s more to the formula. The stock heads were decked and ported, and the stock valve springs were swapped for PSI’s dual-coil springs. The lifters, meanwhile, were replaced with those from GM’s supercharged LSA engine. That last change effectively eliminated the engine’s ability to switch into cylinder deactivation mode, but given the vigor with which Woodbury drives the car, it wasn’t likely to enter it anyway. There’s also a physical “phase limiter” to prevent the factory variable valve-timing system from phasing the big cam right into the valves. Nowicki Autosport founder Jeff Nowicki also changed from the factory Dexos oil to Mobil 1 5W30, a tradition for his engines that dates back years to his endurance-racing days.

“Despite the architectural similarities to the familiar LS engines, there are still quite a few important differences when it comes to building and tuning the LT1,” Nowicki says. “You’ve got to be extremely careful, because you’ve got to accommodate its unique technologies and approach power-building a little differently. It’s still a learning curve.”

Blowing through set of American Racing 1-7/8-inch headers and into a Corsa exhaust system, the stroked LT1 barks to life and settles into a raspy, throbbing idle that you feel as much as hear. And with no malice toward the blower crowd, it’s a sound an idling supercharged engine just can’t replicate on an otherwise stock engine. 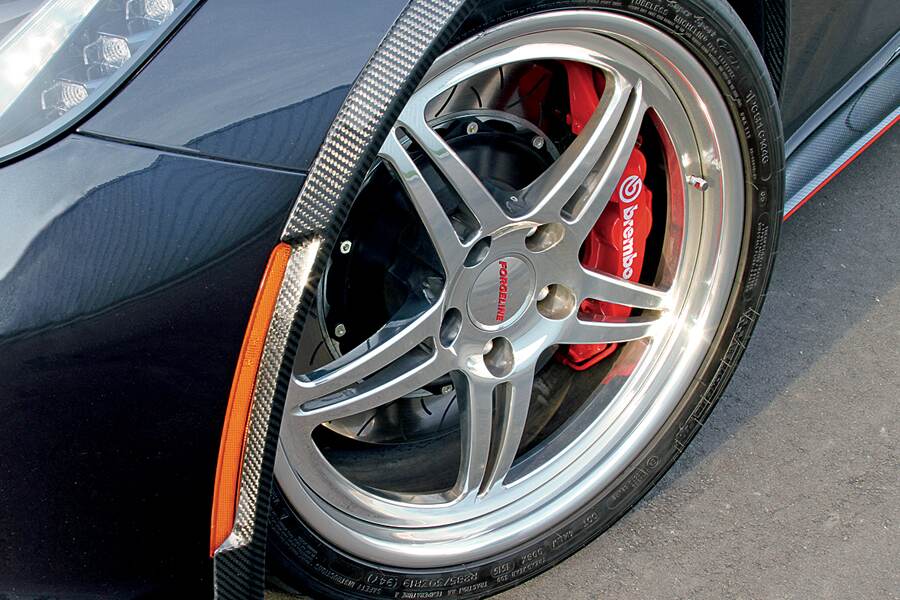 “I love it. Absolutely love it,” says Woodbury. “There’s nothing like it. People at stoplights, including cops, roll down the window to ask about the car because of the way it sounds. Whether the engine made 200 horsepower or a thousand, I’d want it to sound just like this.”

A great deal of visual distinction backs up the Stingray’s aural drama, most of it centered on Nowicki Autosport’s Concept7 range of carbon-fiber accessories. These include a front splitter, rockers, exposed carbon hood and extractor, grille center-bar overlay, A-pillar covers, roof, targa bar, fender gills, rear-quarter intake ducts, wheel flares, rear spoiler with wickerbill, tail-lamp bezels and rear lower diffuser. There’s even an underhood treatment available. In fact, it was the exterior enhancements that got the project rolling in the first place, according to Woodbury.

“I saw the Concept7 that was on the cover of Corvette Magazine [October 2014], and I really fell for it,” he says. “I started ordering the parts as soon as my Stingray was delivered.” 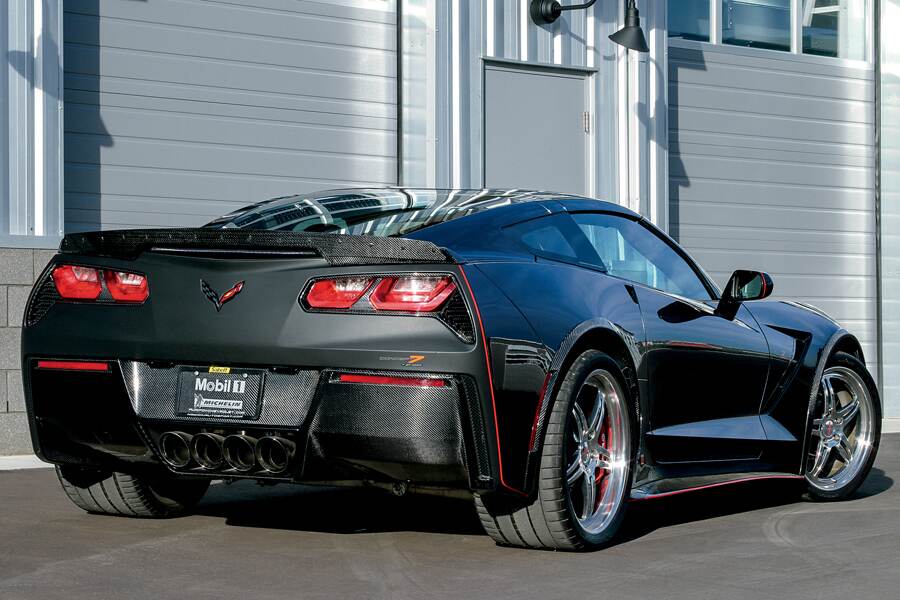 Woodbury’s Night Race Blue car is an early 2015 model, built on the first day of production for the model year and one of the first 12 delivered to the public. It was also one of the few cars built with the active audio-recording technology for the Performance Data Recorder, which was quickly recalled when it was discovered that recording audio without someone’s permission could violate wiretapping laws. Chevrolet urged everyone with the feature to return their car to dealerships so it could be deactivated, but Woodbury hasn’t done it, preferring to retain the as-delivered PDR as an early production quirk. Keep that in mind if you ever hop in the car with him and want to discuss developing a pyramid scheme with a kickback-based slush fund.

“All of the Nowicki carbon-fiber parts really accented the lines and styling of the car, without being garish or detracting from the…basic design,” says Woodbury. “We added the front splitter, hood insert, wheel moldings, brake ducts, rocker moldings and rear spoiler.”

The car was looking great, but that’s when the bug to bolster its performance a bit. Woodbury shipped the car to Nowicki’s headquarters in suburban Detroit for the engine work, opening the opportunity for additional upgrades, including a set of Brembo GT brakes and a quartet of Forgeline Premiere SP3P wheels with Michelin Pilot Super Sport tires. The factory lowering bolts were cranked down as far as they would go, dropping the car by about an inch all around. Nowicki also swapped out the factory stabilizer bars for co-developed Hotchkis adjustable units. 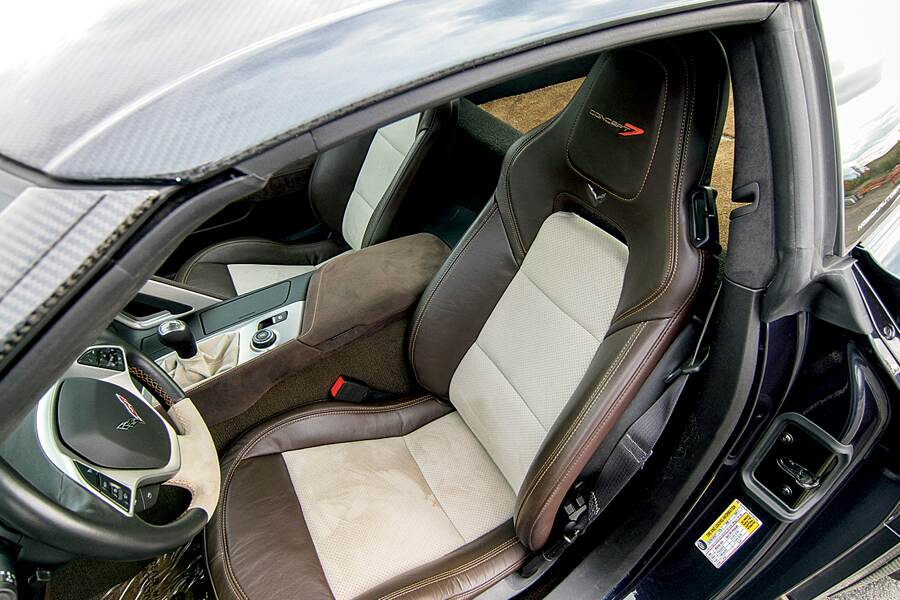 Before shipping the car back to Woodbury in Arkansas, Nowicki conducted a few sorting-out laps on the track at the new M1 Concourse, which runs along Woodward Avenue north of Detroit. Built on a former GM plant site, there’s nothing else quite like it, with “car condo” storage units of varying sizes ringed by a road course that’s accessible to the condo owners. The track isn’t wide enough for competition, but it’s perfect for wringing out a performance car in a safe, closed environment. Some of the condos are used strictly for storage, while others have been customized by the owners with “man cave”-style amenities. Racing magnate Roger Penske even has one. Not surprisingly, it’s one of the larger ones.

“David’s car really came out well, and the M1 track was the perfect place to test it,” says Nowicki. “The engine makes tremendous power at high rpm. It just keeps pulling and pulling, but there’s also amazing low-rpm torque, so there’s a great reserve of power on demand.”

Those were our sentiments on the Stingray, with the thrust accompanied by the crisp, mechanical wail of the engine simply adding to the experience. We didn’t have the opportunity to push the car very hard through the corners, but like all C7s, its turn-in, steering control and composure were above reproach. The lowered suspension and new stabilizer bars further reduced what little lean there was when cornering and gave the car a very balanced feel. This setup is perfect for track-day setups. 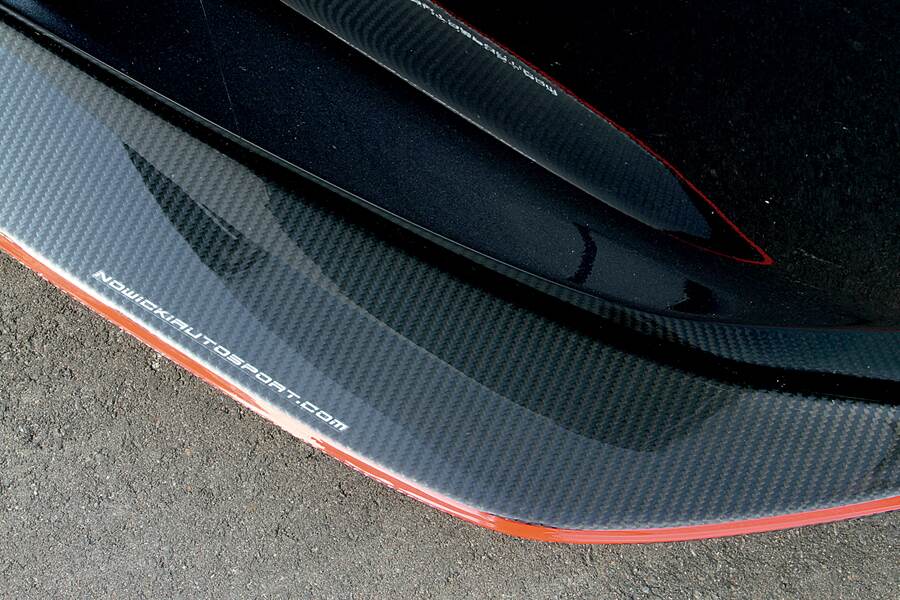 Nowicki also trimmed the interior with Spinneybeck Italian leather and suede inserts on the seats (with embroidered “Concpet7” logos on the headrests), steering wheel and shifter boots, while adding carbon-fiber trim to the instrument panel. There’s also a B&M short-throw shifter. In all, the project evolved into a comprehensive, bespoke appearance-and-performance package that made the car a true one-off. That counts for a lot with the 50-something Woodbury, who had never purchased a brand-new vehicle before cannon-balling into the pool with this enhanced Stingray. He’s enjoying the performance, but also the attention that comes from a car that doesn’t look, or sound, quite like any other Corvette in the Little Rock area.

“I’m a member of the Central Arkansas Corvette Club,” says Woodbury. “It’s a great bunch of owners and we have a lot of fun, but at the moment I’ve got the only modified C7 with a stroked, naturally aspirated engine. It really stands out…but more than anything, the driving experience thrills me like nothing else. The power comes on very manageably, with big power from 4,000 rpm and up, and while it has that fantastic lope to the idle, it drives perfectly in stop-and-go traffic. It’s a great combination.”

And there it is: the aspiration affirmation. David Woodbury preaches the gospel when it comes to the virtues of unassisted air ingestion, and after sampling the car ourselves, we’re in no position to argue. That said, we remain aspirationally agnostic for the sake of objectivity when it comes to the force-fed cars we encounter and enjoy equally. It’s like we have one of those “Coexist” stickers on the back window, but representing blowers, turbos and un-boosted propulsion. 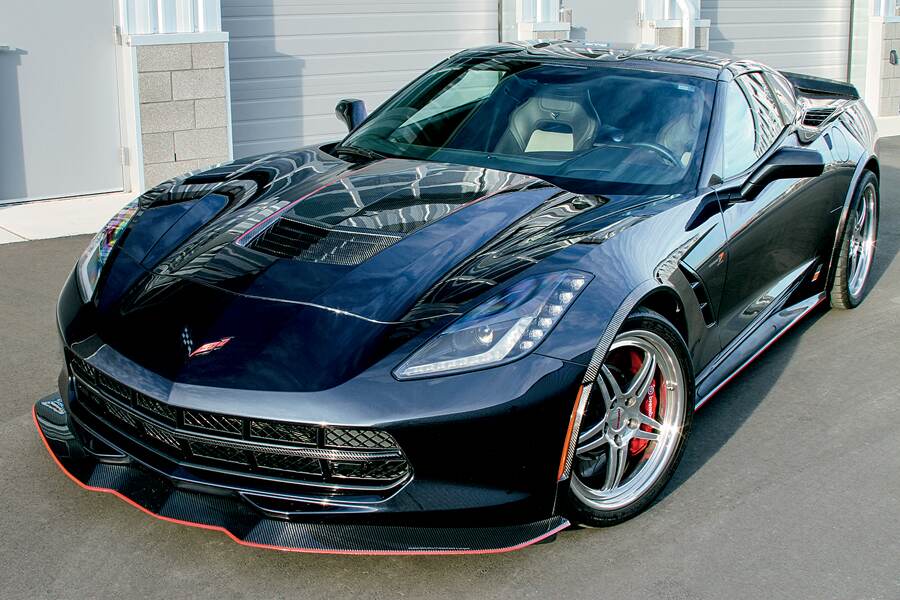 We can nevertheless unequivocally state for the record that it’s dogs over cats, black licorice over red, Mary Ann over Ginger and In-N-Out over everything else. That’s all scientifically quantifiable and there’s data supporting it. Somewhere.

As for Chip/Joanne and Tarek/Christina debate, we’re not touching that with a 10-foot TV remote, but we will say this: Don’t say anything bad about Joanna Gaines in front of your wife, or you’ll be sleeping in your Corvette for the night. Trust us on that. 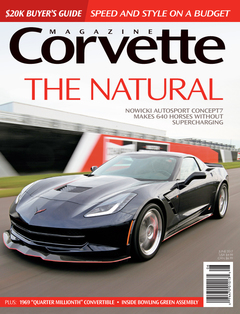