In search of Z06 performance potential, one 2014 Stingray owner builds his own version of the C7 flagship—and then some 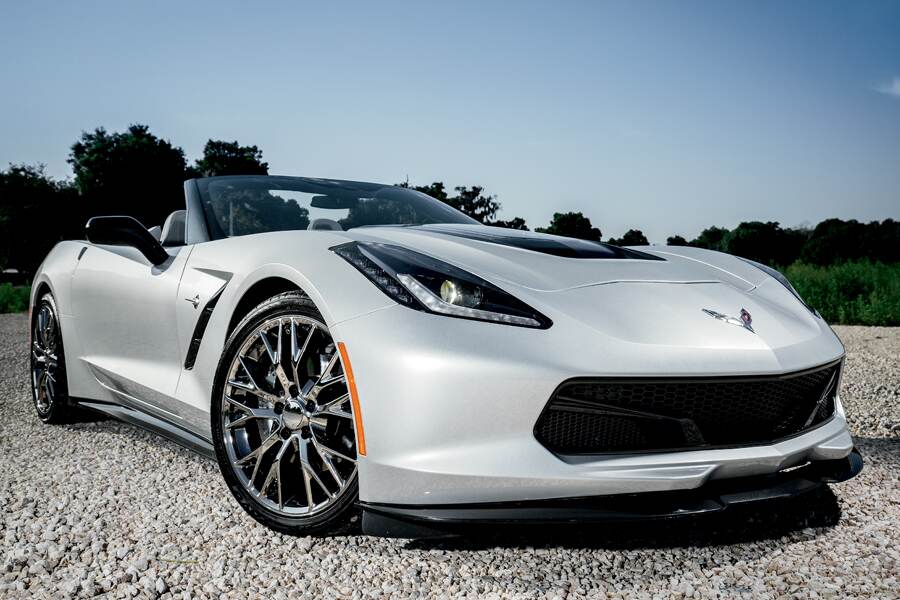 Subject the C7 Z06 to a strict, by-the-numbers appraisal, and it comes out looking nigh invincible. Indeed, all of the pertinent figures—650 (horsepower), 2.95 (seconds to 60 mph with the eight-speed automatic transmission), 10.95 at 127 (time and speed in the quarter-mile), 1.2 (lateral acceleration in g) and 99.6 (braking distance from 60 mph in feet)—place the Corvette flagship at or near the top of the ultra-high-performance sports-car segment in which it competes. And while it would strain credulity to characterize the race-bred Z06 as a sensible choice for daily commuting, the fact is that the car’s base price of $79,450 represents something of a bargain given the sheer amount of tachycardia-inducing vehicular awesomeness it brings.

Of course, these impressive numbers are all academic if, like Peter Berterello, you’re one of the roughly 37,000 early adopters who popped for a base Stingray in 2014, when it was the only seventh-generation Corvette on offer. In this scenario, elevating one’s ownership experience to Z06 standards requires a choice: trade up for the new top-dog model and eat a double-stacked depreciation sandwich, or build a Corvette supercar yourself, using the excellent Stingray as a foundation. Berterello chose the latter path, and the resulting car forms the basis of our story.

As is often the case with comprehensively tweaked automobiles, this drastic makeover wasn’t always in Berterello’s plan. Rather, like many Corvette enthusiasts, he was simply taken with the new Stingray’s angular looks and electrifying speed, and it was these factors that in May 2014 convinced him to trade in his own Vette for the latest edition. At least initially, the process proved more challenging than Berterello expected. 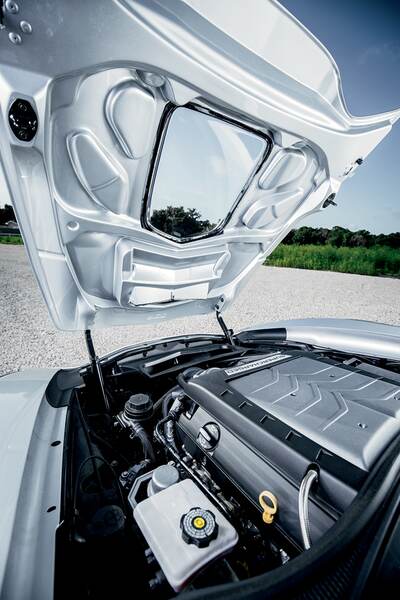 “First I went to [a Tampa-area Chevy dealership], but they didn’t have any C7s in stock, and said that they were very hard to get,” he says. Then things got weird. “The salesman actually told me I might not be able to afford one. I guess he didn’t like the look of my pickup truck.” On the recommendation of a friend, Berterello (and his pickup truck) next visited Stingray Chevrolet, a Plant City, Florida dealership known for carrying a large and varied stock of new and late-model used Corvettes. Happily, events at Stingray unfolded much differently.

“They had five [2014s] on the floor, and four that had come in that day and were being prepped,” he says. But despite having located a veritable Golconda of Corvette goodness, Berterello found that none of the nine cars—yes, he drove all of them—“rocked my world,” as he puts it. Fortunately, the Stingray crew had one more C7 in stock for him to sample—if only they could locate it. After a lot-wide search, the Blade Silver automatic convertible finally turned up on a rack in the rear of the service area, where it was receiving its final presale inspection and preparations. Berterello, who also owned a yellow 2000 droptop at the time, was immediately smitten by the body style and color combination, which we can only assume elicited the desired quantum of world-rocking. He was ready to make a deal, but first he had a short list of conditions for the salesman.

“I told him I would take it, but we needed to do a few things,” Berterello recounts. “I just wanted the mirrors, spoiler and hood stripe painted Carbon Flash Metallic.” He also wanted it done soon, before he took delivery of the car. Despite some initial reluctance, the salesman eventually agreed, and to its credit the Stingray paint shop completed the custom paintwork in just under two days. (“Funny how things get done when they want to close a deal,” notes Berterello wryly.) 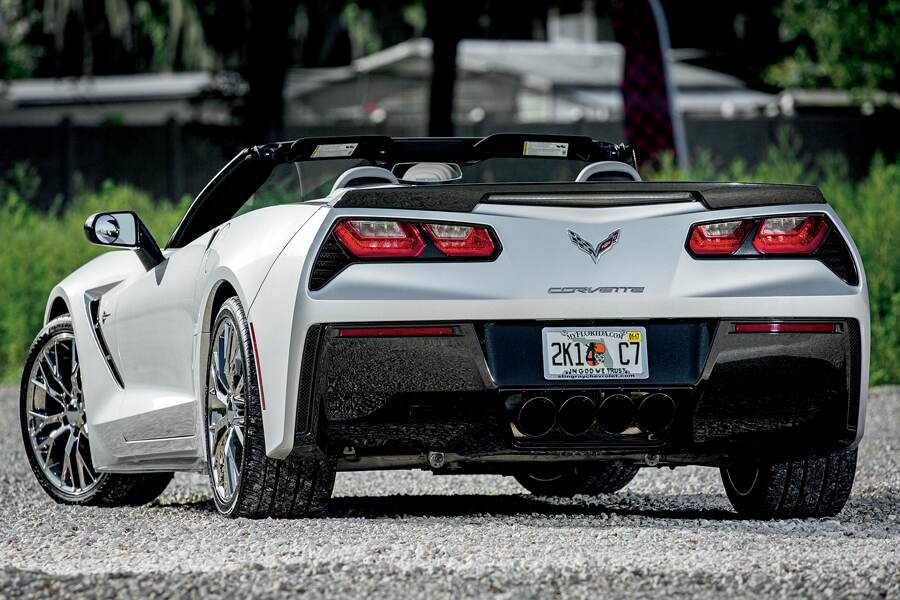 As for the yellow 2000, it ended up staying in the family, thanks to another impressive feat of customer service on the part of Stingray. Shortly after receiving a trade-in value of $16,000 on the C5, Berterello began to regret not selling it to his son, who’d expressed an interest in purchasing the car. He contacted his salesman, and the two worked out a second deal by which the younger Berterello was allowed to buy back the C5 for that same $16K sum plus transfer fees. This is especially remarkable considering that the dealership had already received a cash offer of $20K from another prospective buyer. “I cannot say enough about the people at Stingray,” says Berterello. “They really took care of me.”

Considering the pre-purchase paint customization he’d already specified, it’s not all that surprising that Berterello soon found himself further personalizing the Stingray’s exterior with a light body-conversion kit from Zip Corvette. The package includes several conventional C7 add-ons—side rocker panels, a front splitter and a subtly altered grille—but the undisputed conversation piece here is the carbon-fiber hood, which features a C7.R-style front heat extractor as well as a see-through Plexiglas “window” a la the C6 ZR1. Though arguably overwrought for a typical, LT1-powered Stingray, the paned hood proved critical to the construction of Berterello’s home-brewed Z06 zapper, which, as it turns out, was only just getting underway.

At this point, “The car looked great but wasn’t any faster,” Berterello notes. And while this might have been an acceptable state of affairs under typical circumstances, a long-running non-feud with a certain local C7 Z06 owner ultimately prompted a fresh round of modifications. “I’ve been driving a Vette for the past 16 years and have always gotten, and given, the appropriate acknowledgment [to other owners],” he explains. “Well, for the past two years, one or two times a week I’ll meet up with guy with a 2015 Z06. We’ll pass in traffic or sometimes pull alongside each other as we travel the same roads. There’s never any acknowledgement—he’s just too cool in his Z06.” 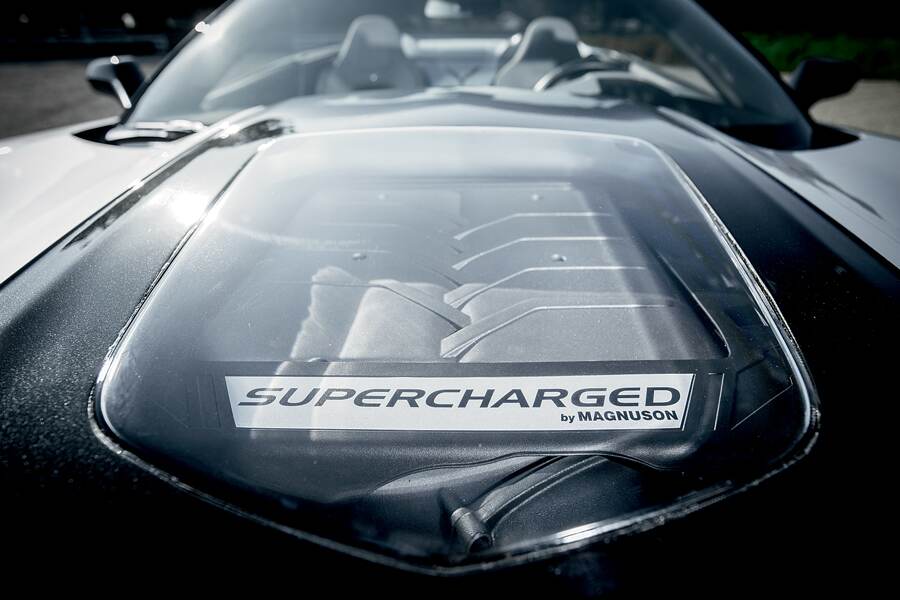 Finding this breach of Corvette-owner etiquette intolerable, Berterello resolved to extract proper recognition from the Z06-driving cretin using a proven method: by pumping his Stingray’s LT1 engine to its limits with a great, steaming snootful of supercharged horsepower. For this operation, he enlisted Greg Lovell and the crew at AntiVenom, a Seffner, Florida–based tuning house that specializes in all vintages of Chevy’s flagship sports car. Lovell began with a proven power-building package comprising a Magnuson Heartbeat supercharger, Kooks long-tube headers and a Corsa exhaust system.

Along with its increased airflow potential, the 2300cc supercharger employed in the Magnuson setup trumps the 1900cc unit in the Z06’s LT4 engine in another area of particular importance: heat management. In the case of Berterello’s tweaked convertible, the result was a powertrain capable of not only outperforming a LT4 on the street and track, but of doing it longer and with more consistency as well. (Apparently Chevy agrees: The upcoming ZR1 is rumored to use a 2300cc blower and generate more than 700 hp.)

The results of Lovell’s ministrations—well over 500 horses at the rear wheels, along with a quantum leap forward in accelerative potential—proved sufficiently bracing for a time, but Berterello was after bigger game, as he explains: “[Those parts] made a difference, but I wanted to be able to deal with any stock Z06 or Dodge Hellcat. I just wanted to be able to say, ‘Mine is bigger than yours,’ if you know what I mean.” 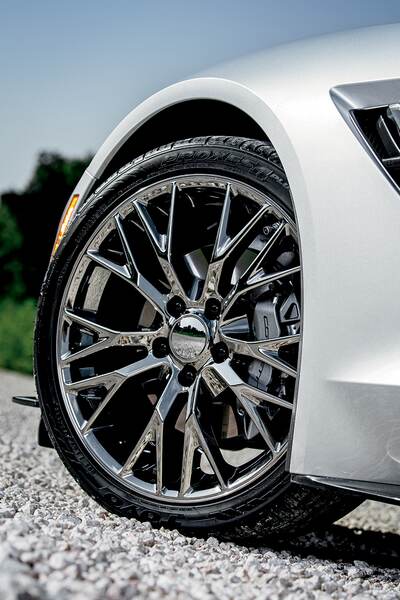 Lovell is an old hand at this sort of thing, so it didn’t take him long to devise a second helping of modifications capable of further, um, engorging the car’s output curve. A custom blower camshaft and CNC-ported heads formed the basis of the round-two upgrade, but the LT1’s advanced architecture meant making a number of supporting changes in the process. In particular, the design of the standard displacement on demand, or DOD, system is such that it limits maximum engine speed. With the DOD hardware removed, the LT1 in Berterello’s car now revs freely and generates power all the way up to 6,900 rpm—a full 300 revs high than the stock fuel cutoff.

Also worth noting is that the cam features a 38-percent-larger fuel-pump lobe, enabling the stock fuel system to meet the needs of the boosted (by 8 psi) motor. More-traditional fortifications such as dual valve springs, titanium retainers and stronger head gaskets from an LT4 finished off the engine mods, which succeeded in punting the Stingray’s output figures well into the realm of the absurd: 691 hp and 676 lb-ft of torque at the rear wheels. Even the thoroughly jaded Lovell was impressed with the results, saying of his initial post-mod test drive, “The car went sideways so fast, I couldn’t believe it—like it had an electric motor.”

Accounting for typical frictional losses through the car’s drivetrain yields approximate flywheel-output figures of 813 and 795, respectively, meaning Berterello’s “measurements” are now comfortably larger than those of anything he’s likely to encounter on a public road. That includes the too-cool C7 Z06 owner we mentioned earlier, who received his well-deserved comeuppance not long after Berterello took delivery of his completed Stingray. “We hit it at about 20 mph, and by the end of Second gear, it was way over,” he says. “I’m still looking for a Hellcat [driver] with the balls to try me.” 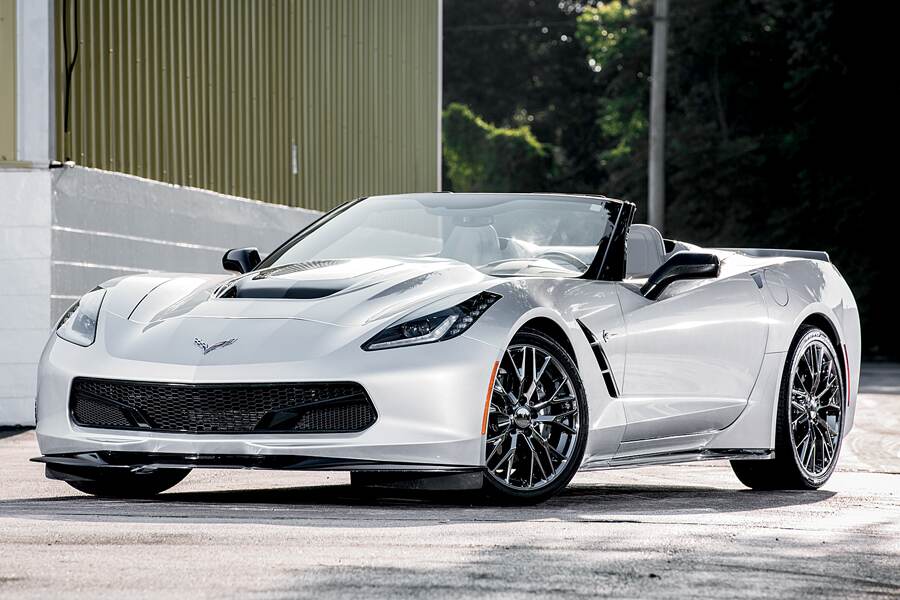 In the meantime, Berterello has few other items on his Corvette to-do list. With forward traction now at a premium, he’s planning to install a full Z06 body kit capable of housing 12-inch rear wheels. At that point, the currently installed set of black-chrome Z06-style rims and Toyo Proxes rubber (sized 255/35-19 in the front and 295/30-20 in the back) will give way to something more in keeping with the Stingray’s outsize speed potential. And while Berterello currently has no plans to replace the stock brakes and suspension components, we wouldn’t be too surprised if he revisited the topic at some point. After all, the man is an unabashed “tweaker.”

“I have to say, I’ve never bought a car or truck that I didn’t do something to,” he admits. “It’s mostly just decorative, and always wheels and tires. I have a 2006 Ford F-250 that was left over from my landscaping company…it was beat to hell. Well, $13,000 later it’s a pretty sweet ride.”

Just be sure to save room under the hood for the supercharger. 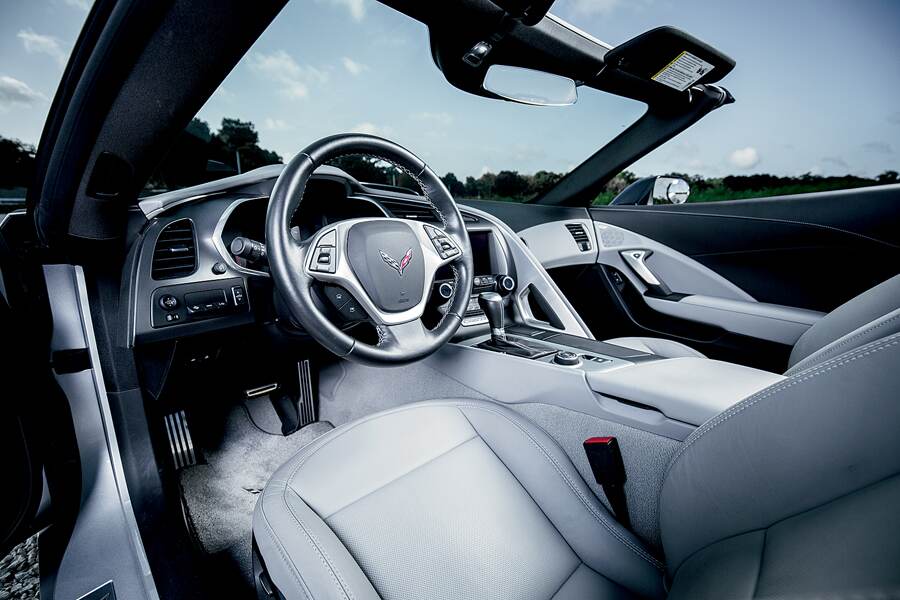 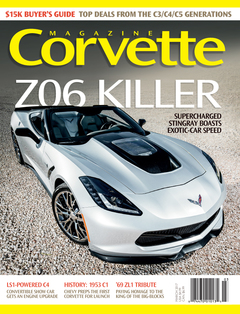