"Mr. '63" restores his dream car to a level of authenticity rarely seen 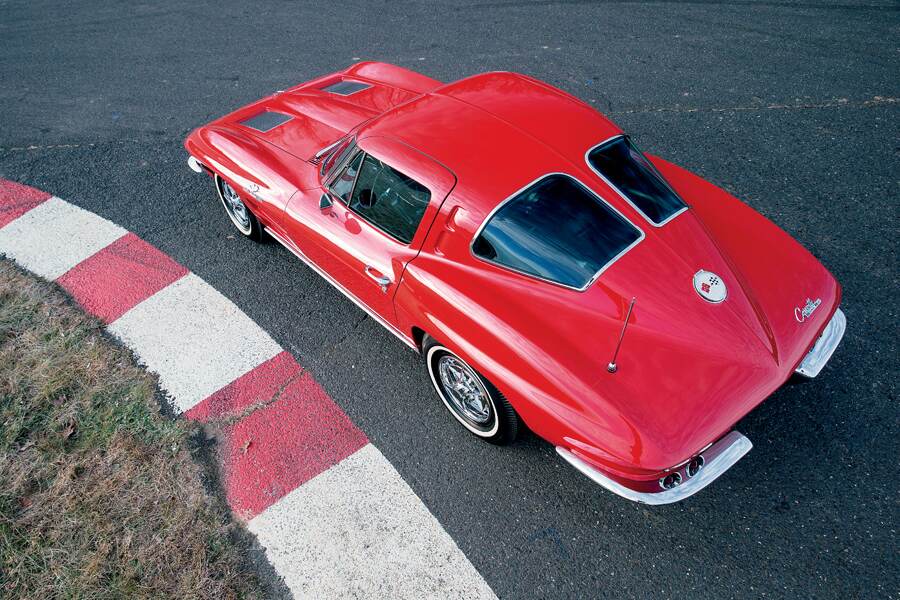 Andy Cannizzo is widely known as “Mr. ’63,” and to paraphrase those old Smith Barney commercials, he got the nickname the old fashioned way: he earned it. Nearly 50 years ago, Cannizzo got into collectible cars with the purchase of his first 1931 Model A coupe. Many more followed, including several national award winners, but after two decades with the ubiquitous Ford, the Staten Island, New York, native decided it was time for a change and switched his obsessive allegiance to 1963 Corvette coupes. Since 1988 he’s owned examples with every available engine, ranging from the base 250-horsepower mill to the fire-breathing 360-horse Fuelie.

Though he does consider Chevy’s legendary split-window design pure art, he’s not content to buy perfect cars to place on a pedestal and worship. Instead, it’s all about the challenge of restoring them to the highest possible degree of excellence. “I just love the art of restoration,” explains the retired IBM technician with a boyish grin that belies just how seriously he approaches the hobby. “My enjoyment comes from doing research on 1963 Corvettes and ’63 parts, learning as much as possible, hunting down original, correct GM parts and striving for perfection in the restorations I do.”

Drawing on his comprehensive knowledge about early Corvettes in general, and ’63s in particular, as well as experience gained working at two machine shops many years ago, Cannizzo is able to accurately restore individual parts and assemblies, such as ’63 consoles, Midyear headlights and vent-window assemblies. This, combined with an ability to locate original GM parts, has made him a valuable resource for other restorers. 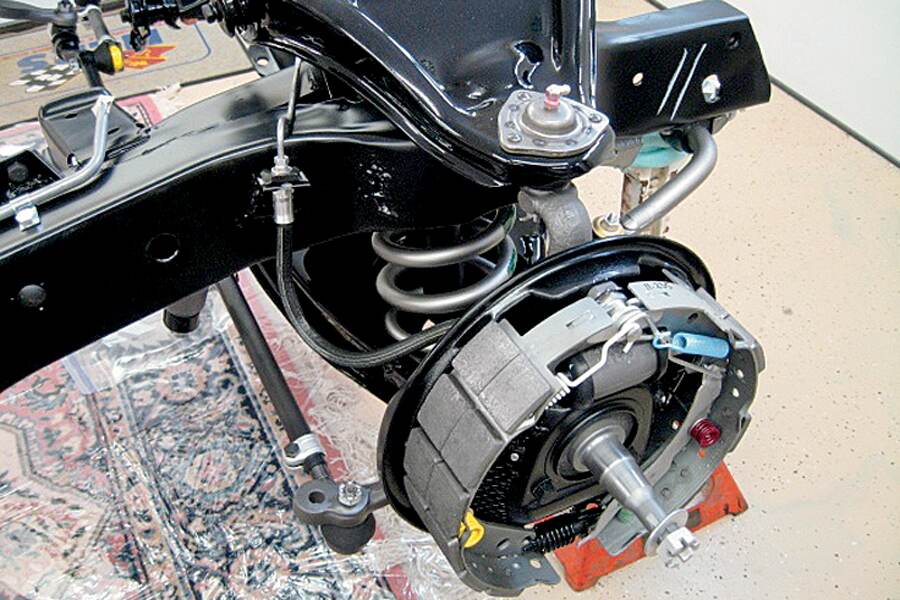 Sometimes a seemingly simple call from someone looking for a particular part leads to an unexpected result.

“About 10 years ago, I was called by a gentleman looking for a 1963 master cylinder,” Cannizzo recalls. “I told him that I had many fully restored originals on the shelf and could send him one that’s ready to install. He said he doubted I had what he needed, [which was] a dual-reservoir master for his ’63 Z06 ‘Tanker.’ He was right in that I didn’t have a Z06 master, but I began asking him questions about the car, and of course asked him if it was for sale. It wasn’t, but I kept his contact information. I then began searching for a real, factory-built Z06 tanker, the rarest and most sought after of all ’63 Corvettes. I found several cars, but they were either too pricy, too far gone or were fakes.”

After two years of diligent searching did not yield a suitable car, Cannizzo called the man who had contacted him in search of a Z06 master cylinder. To his utter delight the bloke still had the car and in fact wanted to sell it. “He said my timing was perfect, as he was about to list it on an Internet auction site. The car was in Hamden, Connecticut, which was quite a coincidence because my son David had just married a girl from the same town.” 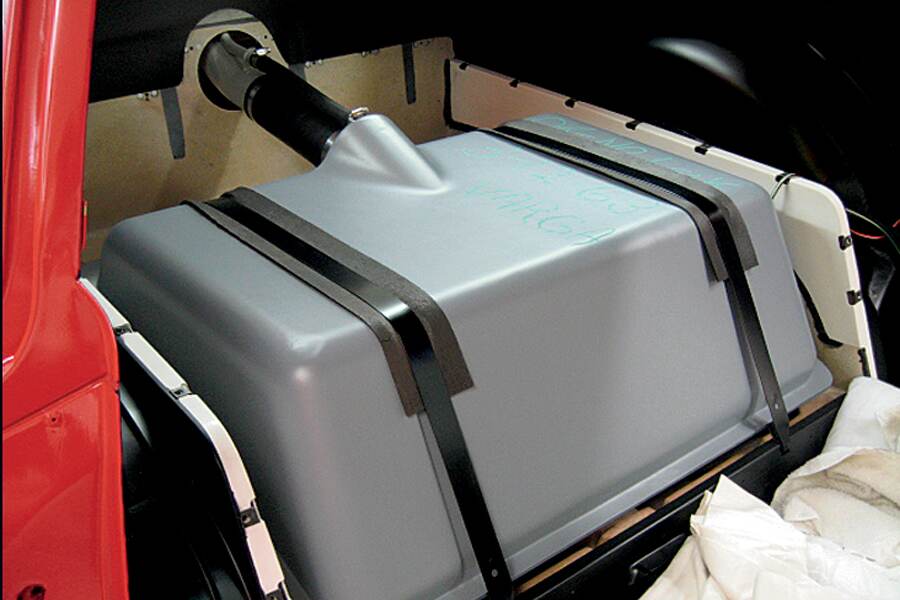 Cannizzo went to Hamden the following weekend and carefully inspected every inch of the car. After concluding that it was in fact a real, factory-built, big-tank Z06, he quickly reached an agreement with the seller. “It was truly the fulfillment of a dream,” reflects Cannizzo. “The ’63 Corvette is an iconic collectible, and Z06s are the rarest examples. Out of 21,513 Corvettes made in 1963, only 199 were built with the Z06 race option. Of those, only 78 were built with the 36-gallon tank option, and only about 50 real ones remain in existence today. The car I bought is one of only five red ones known.”

Soon after getting his new prize home, Cannizzo began the restoration process. He was determined to use only the car’s original or new-condition GM parts, an approach facilitated in great measure by his 18-year collection of mint original and NOS (“new old stock”) 1963 Corvette hardware. “My passion is in finding mint and NOS ’63 parts, and I accumulated a treasure trove from 1988, when I got into Corvettes, to 2006, when I bought the Z06. I knew that someday I’d find a car that needed a full restoration and that was deserving of all my rare, correct parts.

“During the restoration,” he continues, “I treated every single part as if it was going to be the only part being judged at a top-level show. That meant fully restoring its function and appearance inside and out, even in areas that nobody would ever see. The words ‘good enough’ did not exist in my vocabulary. Everything had to be perfect.” 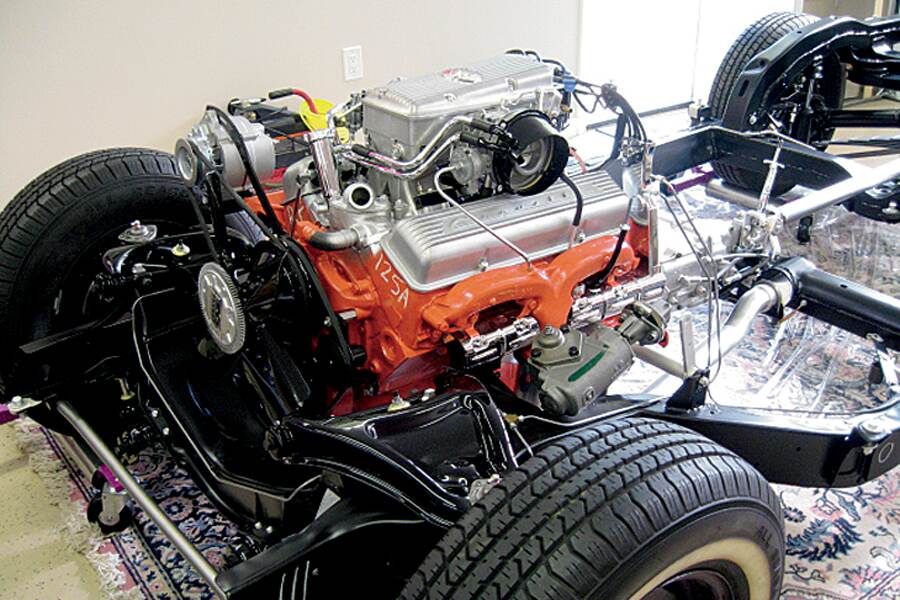 Locating correct hardware and achieving perfection in its restoration was more challenging with some things than others, and among the most difficult items of all to find were the various brake parts. The 1963 Z06 option was specifically tailored for road racing, and a heavy-duty brake system was the heart of the package. It featured thick-gauge vented backing plates, segmented cerametallic shoes, internal cooling fans, finned drums, “elephant ear” air scoops, special wheel cylinders and the aforementioned dual-reservoir master cylinder. The bespoke brake parts are extraordinarily rare today, but Cannizzo managed to find pristine examples of everything needed.

Besides locating ultra-rare Z06 brake parts, Cannizzo also managed to find NOS GM examples of more mundane but equally scarce items, including seat upholstery, wire harnesses, U-joints, seatbelts, wiper arms and blades, body emblems, tail lamps, hubcaps and glass. “In total,” he recalls with obvious pride, “around 98 percent of the parts used in the restoration are correct, original GM.” That is truly a remarkable number when you consider how readily available reproduction parts for 1963 Corvettes are. It would have been quicker, easier and far less expensive to order a lot of repro bits, but that would have been completely contrary to Cannizzo’s exacting nature.

The restoration was completed in 2011, after about 3,000 man-hours of labor spread out over five years. While Cannizzo did a lot of the work himself, he did rely on the expertise of various people and businesses to help him bring his dream Z06 to its final state. “A restoration performed to the level of this car could not have been done by me alone, and I have a lot of people to thank, beginning with my wife Nancy for her help, tolerance, and patience. 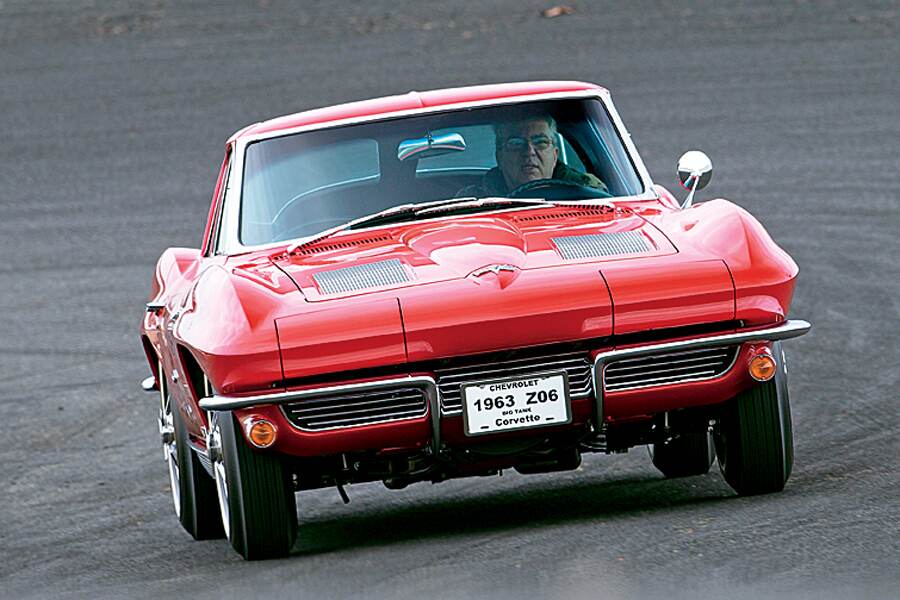 “I also want to recognize Pat Musi for rebuilding and dyno-testing the engine, Larry Fischer for rebuilding the transmission and rear end, Librandi’s for all of the chrome plating, Al Knoch for supplying correct carpeting, Frank Antonicelli for rebuilding the fuel-injection setup and Vince Evangelista for painting the body. Others who were a big help to me include Corvette Paramedics, Tony Averdesian, Franz Estereicher and Bob Semenera.”

All of the time and effort Cannizzo and his small army of contributors put in has paid off handsomely on the show field. As of this writing, the ’63 has earned an NCRS Top Flight, Bloomington Gold, AACA First Junior and First Senior, Chip’s Choice, two special National AACA awards, Best American Post-War car at Amelia Island and numerous first place and best-in-show honors.

“I couldn’t be happier with this car,” reflects Cannizzo. “I absolutely love 1963 Corvettes, and it doesn’t get any better than an authentic red Z06 tanker. It’s the ultimate example of an iconic car. The split-window design is beautiful from any angle, and the car’s engineering and performance were well ahead of its time. Like any long-term, comprehensive restoration project, there were ups and downs and some stressful moments along the way, but I can honestly say that I loved every minute of it.” 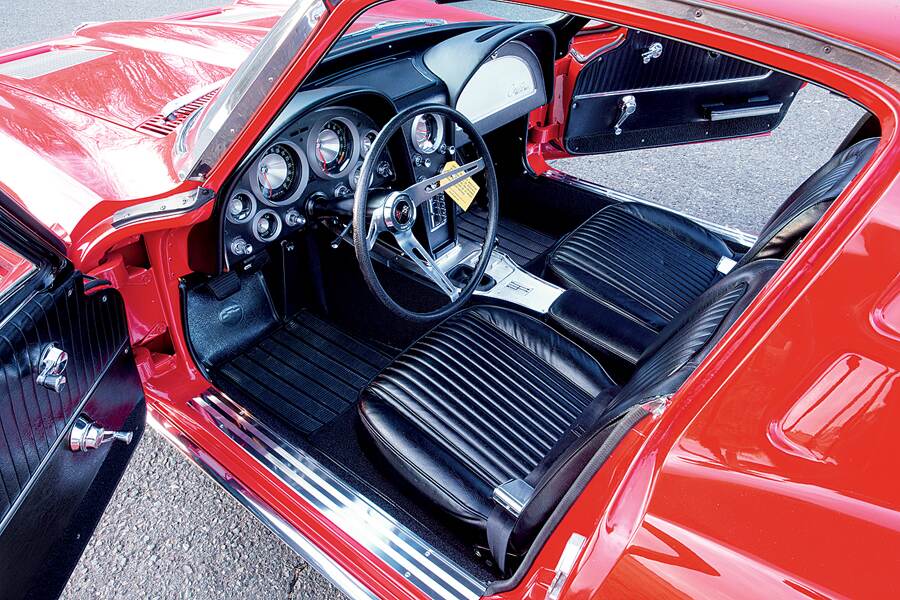 In fact, Cannizzo loved restoring his ’63 Z06 so much that he bought another one when the opportunity arose. It’s an Ermine White big-tank car that had been owned by the same family since 1965 and in storage for almost 50 years when he acquired it in 2014. Time has taken a toll, but it’s remarkably complete and original, with an un-hit body, making it a perfect candidate for a comprehensive restoration. And if our stunning Riverside Red feature car is any indication, Mr. ’63 is going to turn out another Z06 Tanker that’s as close to perfection as possible. 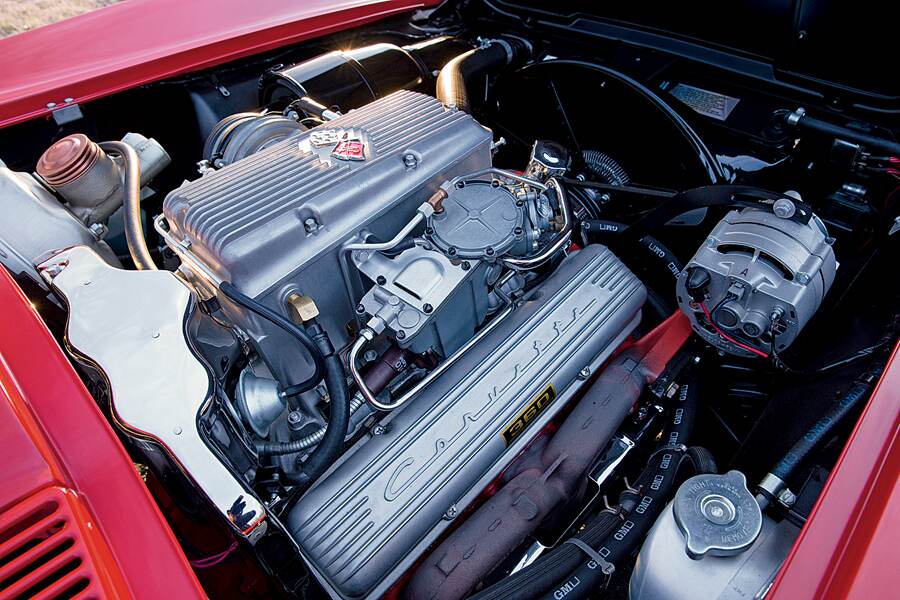 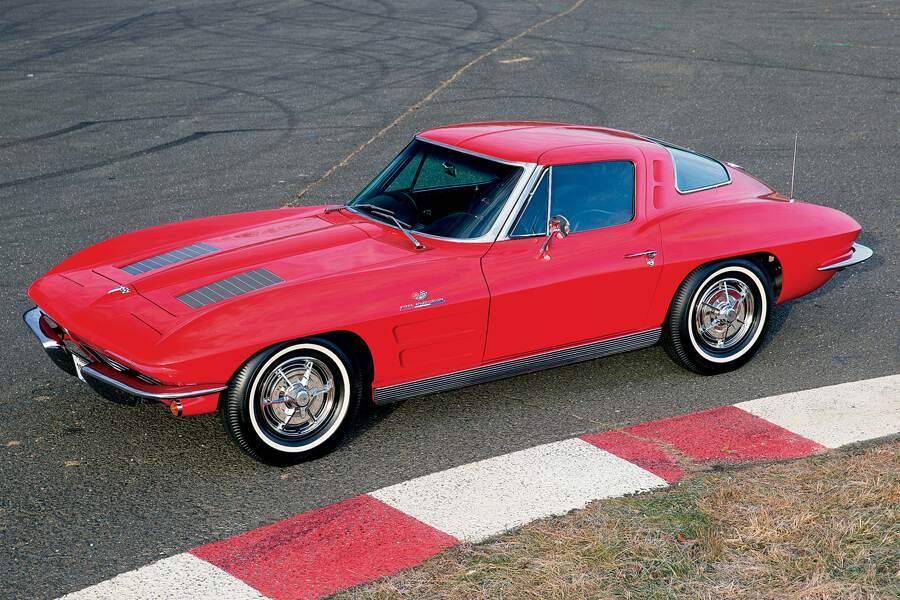 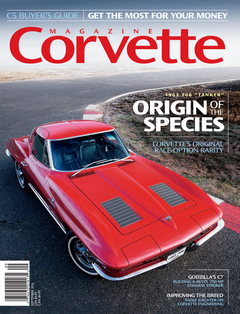