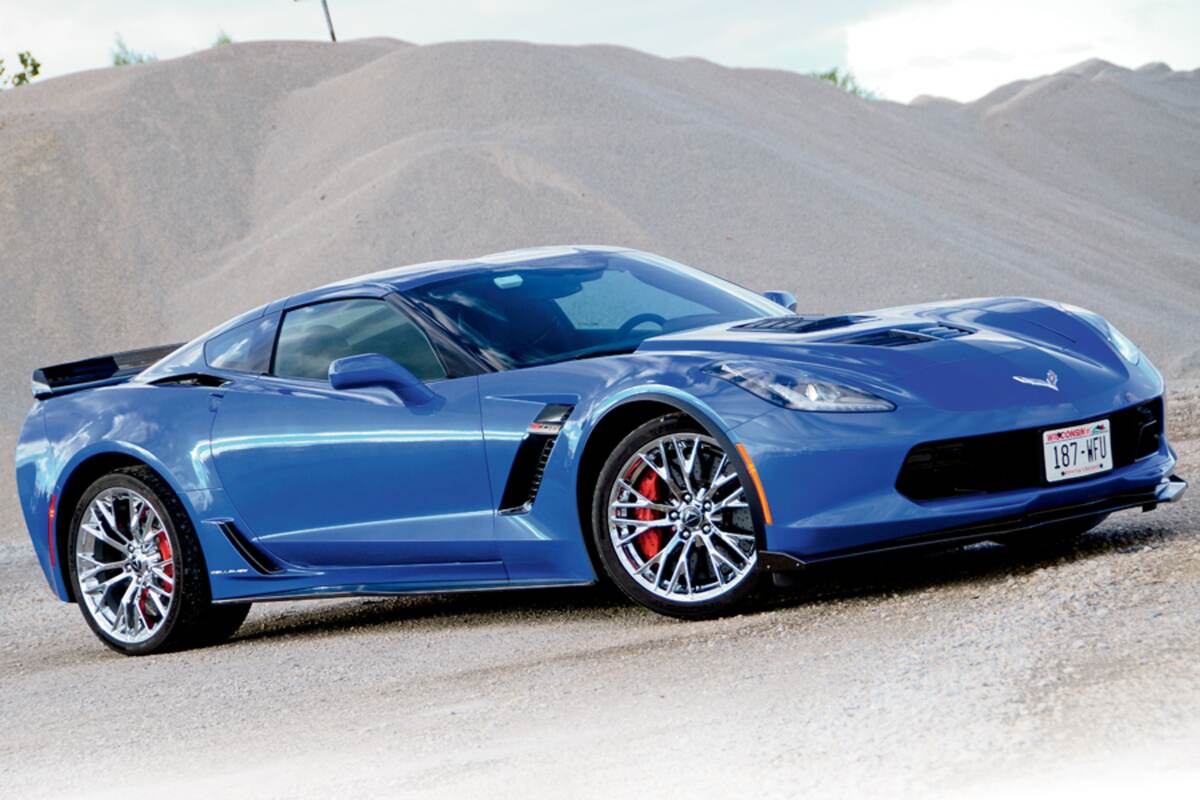 “Third time’s a charm,” they say. But “bad things come in threes,” too. So which cliché is actually true, if either? In the case of Callaway’s SC757, both are, since this prodigiously powerful C7 Z06 is not only immensely charming, but one undeniably bad customer as well.

Callaway has a long and rich history of forced induction, starting with turbocharger kits for BMWs and other European marques back in the 1970s and early ’80s. Arguably the company’s most notable achievement came in 1987, when it was selected to design and build a factory-sanctioned twin-turbo Corvette package. That project lasted through 1991, and was followed by many more collaborations with GM and other carmakers.

The latest is a “GenThree” supercharger with a “TripleCooled” design, in Callaway parlance. Adding to those triplets, the blower’s displacement is nearly a third larger than the stock C7 Z06’s unit (2.3 liters versus 1.74 liters). All told, the result is an output trumpeted in the car’s numerical moniker: 757 hellacious horses, or 107 hp more than the factory LT4 engine’s output. Plus, it delivers torrential torque: 777 lb-ft at 4,500 rpm. To get an idea of how Callaway manages that feat, let’s a look under the hood of Ivan Schrodt’s SC757, shown here. 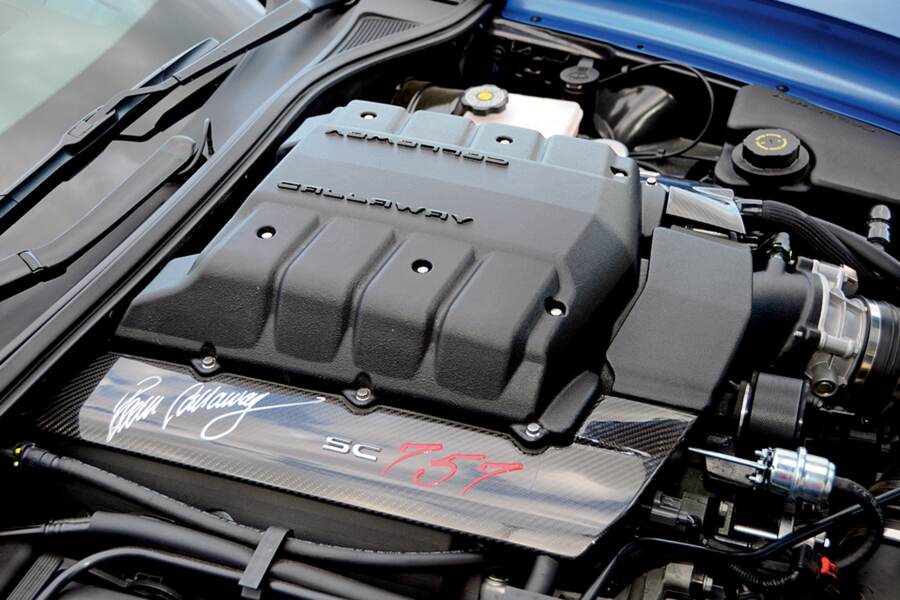 After Schrodt ordered his fully loaded 2015 Z06 from his local Chevy dealer, it was drop-shipped to Old Lyme for the Callaway delivery program. Once it arrived, Schrodt was on hand to observe the supercharger upgrade.

“I enjoyed seeing how the conversion was done,” he relates. “It was great fun talking to the folks working on the car.” But he was squeamish about one aspect: “They had a…template for the supercharger opening, and though the precision was evident, I was still glad I hadn’t been there when they cut into my carbon-fiber hood.” 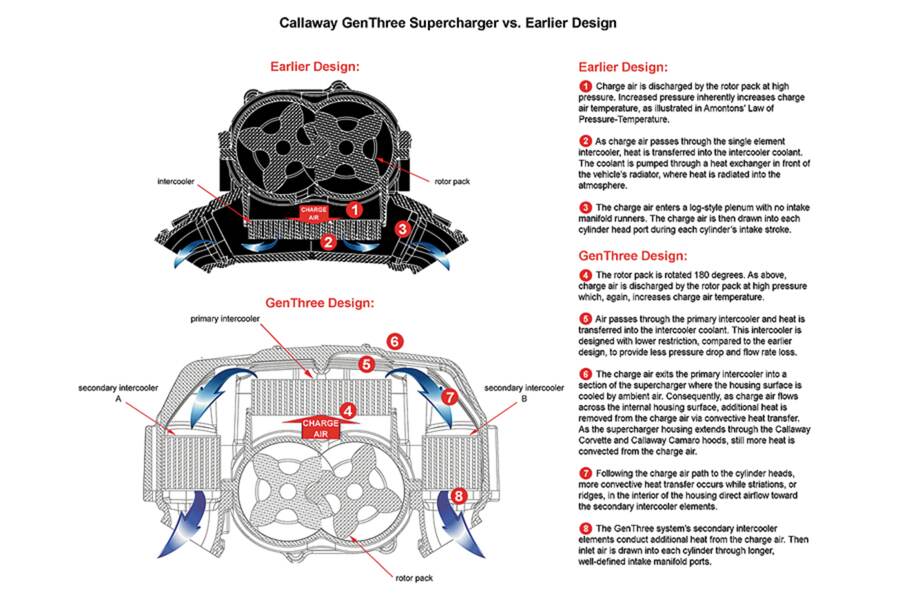 As for the TripleCooled configuration of the blower, a key driver behind the design was to ameliorate the power-robbing heat that can occur on both the factory and some aftermarket setups. It all boils down to maximizing air density and flow. Cooler air has greater density, providing higher-mass airflow and thus more power.

“Our [new] supercharger design delivers a cooler charge, at a lower driven speed, allowing a higher manifold pressure and more power,” notes Mike Zoner, managing director for Callaway. Elaborating further on the technical principles involved, he notes that, “Mass airflow is proportional to pressure and volume, and inversely proportional to temperature. With our design, we took a comprehensive engineering approach in addressing the effects and characteristics of those properties defining mass flow: pressure, volume and temperature.” 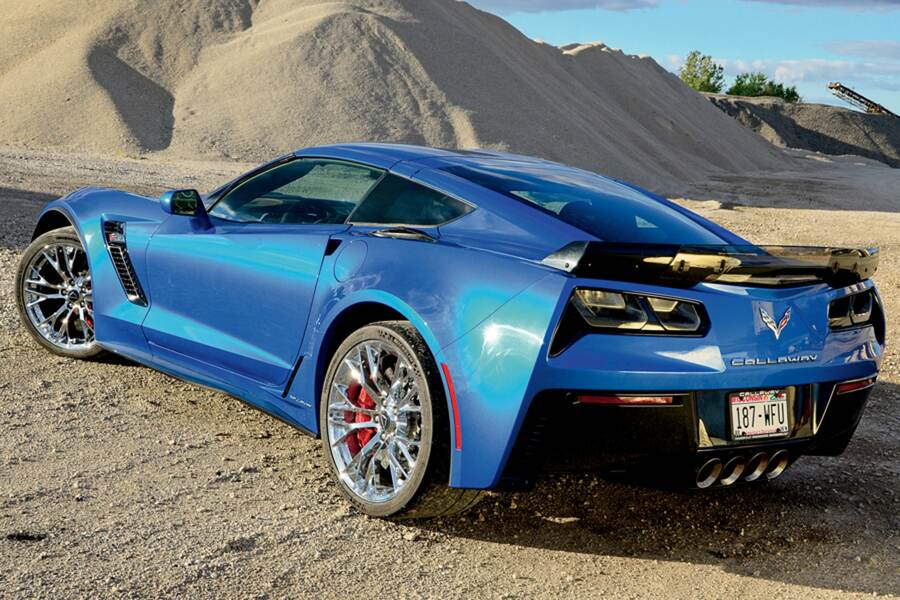 To do so, Callaway engineers started by turning the system on its head—literally. Eaton’s 2300cc TVS rotor-pack assembly was flipped over 180 degrees to direct the charge-air upwards, toward the top of the housing.

The air then flows through a primary intercooler, exiting into the top section of the supercharger housing. Since the housing extends through an opening in the Corvette hood, it’s exposed to ambient air. This provides a convective cooling benefit that further reduces the temperature of the intake charge.

Inside the housing, ridges channel the airflow back down toward the cylinder heads, providing additional convective heat transfer in the process. As the air passes around the sides of the housing, it goes through two more, secondary intercoolers (for a total of three, hence the moniker). As these three intercoolers conduct heat from the charge air, the coolant inside them circulates through a heat exchanger in front of the radiator. From there, those excess degrees harmlessly radiate into the atmosphere. 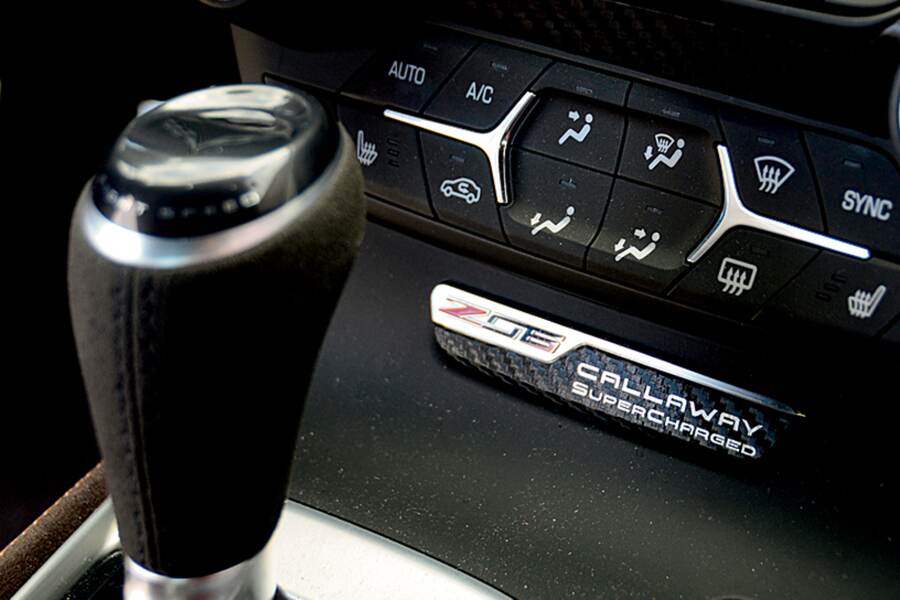 Another design aspect developed by Callaway engineers was intended to produce dual benefits, as Zoner explains.

“Given the increase in volume, our focus was to drive the supercharger only as fast as required to achieve the pressure required to meet our desired power levels,” he says. “Our drive ratio for the SC757 application is 11 percent less than the [factory supercharger’s] ratio, while increasing inlet-port [boost] pressure by 25 percent.” Driving the assembly at a lower speed not only generates less heat, he points out, but also decreases stress on the supercharger assembly and engine.

Naturally, with such significant changes taking place in the air-intake system, fuel flow must be altered in as well. Callaway employs a proprietary recalibration of GM’s engine-management system that doesn’t require increasing the size of the standard fuel injectors. “The fuel-delivery capability of the OE system’s hardware is sufficient to support our power level with recalibration only,” Zoner notes. 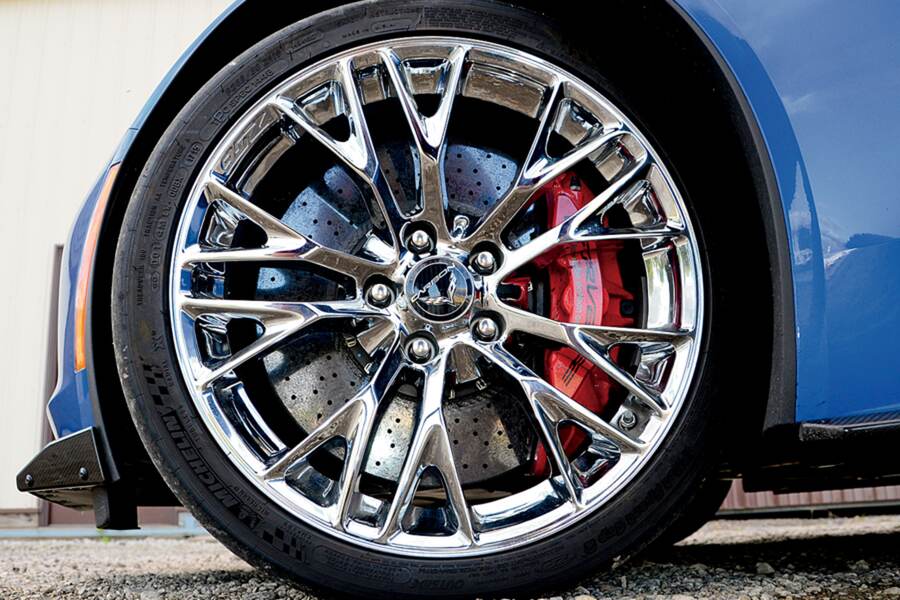 Callaway claims that, in dyno testing, the TripleCooled configuration’s inlet-air temps increased by less than one third of the jump experienced by other supercharger systems (10 degrees versus 35 degrees). Also, at a recent controlled test session at a southern California race track, the combination of increased volume, decreased drive ratio and increased boost pressure, along with Callaway’s unique cooling approach, is claimed to have yielded a decrease in inlet-port temperature of 20 degrees (F), as compared with the OE configuration.

These reductions are especially noteworthy in light of reports of track-driven C7 Z06s temporarily losing output due to excessive intake-air heat. The power loss occurs when the factory engine-control module steps in to preserve the long-term durability of the powertrain.

Additional modifications include a low-restriction intake system that further enhances inlet-air capacity. Parasitic drag, meanwhile, is reduced via an internal bypass that diverts the inlet-airflow path during idle, low-load cruising and deceleration; this allows the supercharger’s internals to spin freely. Consequently, fuel mileage is practically unchanged from the stock C7 Z06. 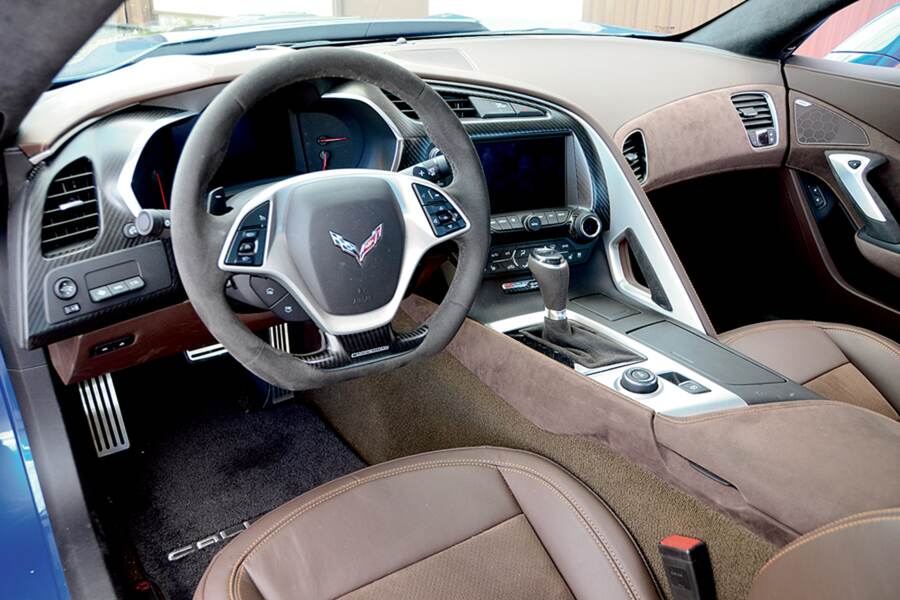 Given all the science that goes into this supercharger, it’s perhaps understandable that Callaway eschews the term “tuner car” with regard to the SC757. After all, this is no high-strung one-off, but rather a thoroughly engineered new vehicle sold through Chevy dealers and backed by an optional, five-year/60,000-mile service contract.

Impressive on paper, to be sure, but what’s the car like in the real world? We endeavored to find out last fall, during a trip to America’s heartland. 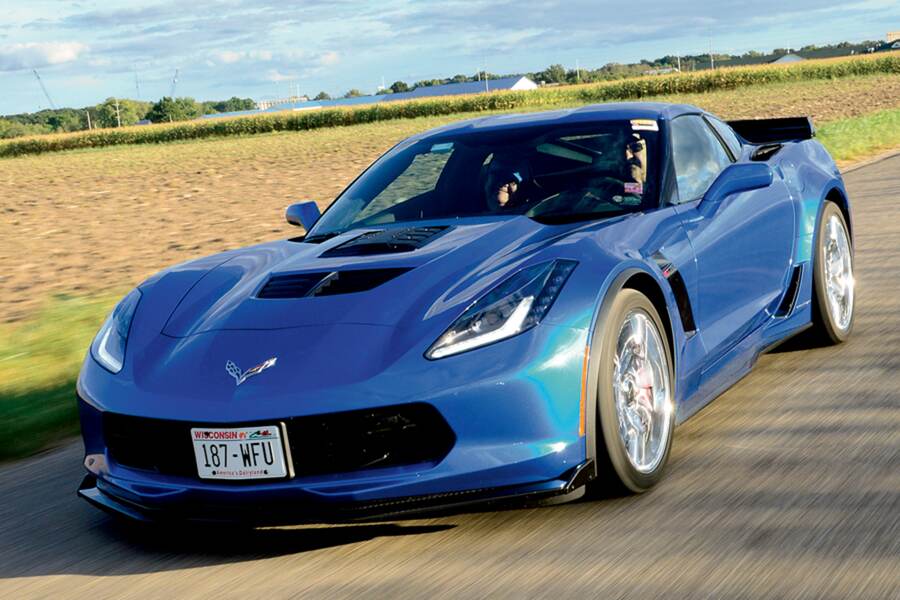 Having delved into the technical details of the SC757, we should pause here to give a formal nod to car owner Ivan Schrodt. Schrodt is a longtime Corvette enthusiast (and Callaway fan, in particular) with a penchant for giving: incredibly, he’s donated five of the eight Vettes he’s owned to the National Corvette Museum. (The other three are held in trust for the NCM later on.)

What prompted such munificence? While lapping the NCM’s road course in his 2012 Callaway, “It hit me that we had two Corvettes that would be great for the track to use for hot laps and training,” Schrodt recalls. After providing a couple of Z06s for that purpose—2002 and 2007 models—he thought it would be fun to provide a few others as well. The oldest now on display is a ’66 327/350 convertible, while the ’80 coupe and ’96 convertible are used for leading tours and parades.

Clearly a generous guy, Schrodt was also quite liberal in lending us his freshly minted Callaway SC757 for some hands-on motoring on the rural roads outside Effingham, Illinois. We relished the experience so much that, after a minimum of importuning, we were allowed to extend our strafing runs through the countryside. Schrodt clearly likes sharing the simple, exuberant fun of wringing out an enormously powerful automobile.

With what results? Callaway claims a 0-60-mph time of 2.8 seconds, and a quarter-mile ET of 10.5 seconds at 131 mph. We can’t vouch for the latter, since no drag strip was readily available in the surrounding cornfields, but that three-second sprint (there’s that trilogy again) is utterly believable, alarming and exhilarating all at once. Stomping on the throttle feels like hurtling off a carrier deck via a steam-pressure catapult. And it’s decidedly addictive, too. We could barely pry our hands off the wheel.

Given the ridiculous amount of power on tap, some throttle restraint is warranted, unless you’re on a long straightaway. We suspect the car could also prove a handful on a road course, especially in Sport Mode, where the tail can get a bit loose with the abundance of propulsion available. A man’s gotta know his limitations, as Dirty Harry once observed.

The Track mode firms up the suspension even more, for a more sure-footed feel, but it’s not too stiff, and ideal for higher speeds. “It’s so stable [that] at 150 mph, it feels like 50 mph,” Schrodt says. (We won’t put in print just how fast we went on public roads, but we can state confidently that we find no reason to doubt his assertion.) The Z07 package’s carbon ceramic brakes are more than up to the task of slowing the car from such supra-legal velocities, and will in fact press your nose into the windshield if you stab the pedal too aggressively.

As for Eco mode, what’s the point? Upheaval in the global oil market has made gas cheap and plentiful again, so forget about it unless you’re loafing on a long cruise.

Drawing on his extensive experience with both Corvettes and Callaways, Schrodt shared some of his own observations about his enhanced C7 Z06. “If anyone told me that Callaway could improve on my 2012 model, I would have laughed,” he says. “Even a stock Z06 is a supercar that’s easy to drive on the street, and the SC757 is a quantum leap above it. Yet it’s still drivable around town. But mash the throttle, and it takes off like a rocket ship.”

Obviously not one to hold back, when Schrodt ordered the car through a local Chevy dealer, he checked off all the available options. But the salesman was taken aback by one more item on the list: to have the factory car shipped to Callaway’s facility in Old Lyme, Connecticut, for the SC757 conversion, rather than across the street for Schrodt’s typical museum delivery. After staring away to ponder this additional request, the befuddled salesman blurted out, “Ivan—it’s already got 650 horsepower!”

But he’s driven the Callaway since then, and now totally understands Ivan’s penchant for power. And so do we—in triplicate. 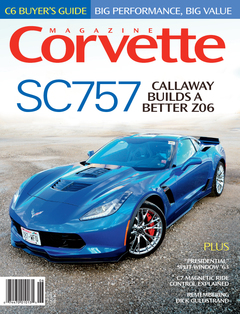