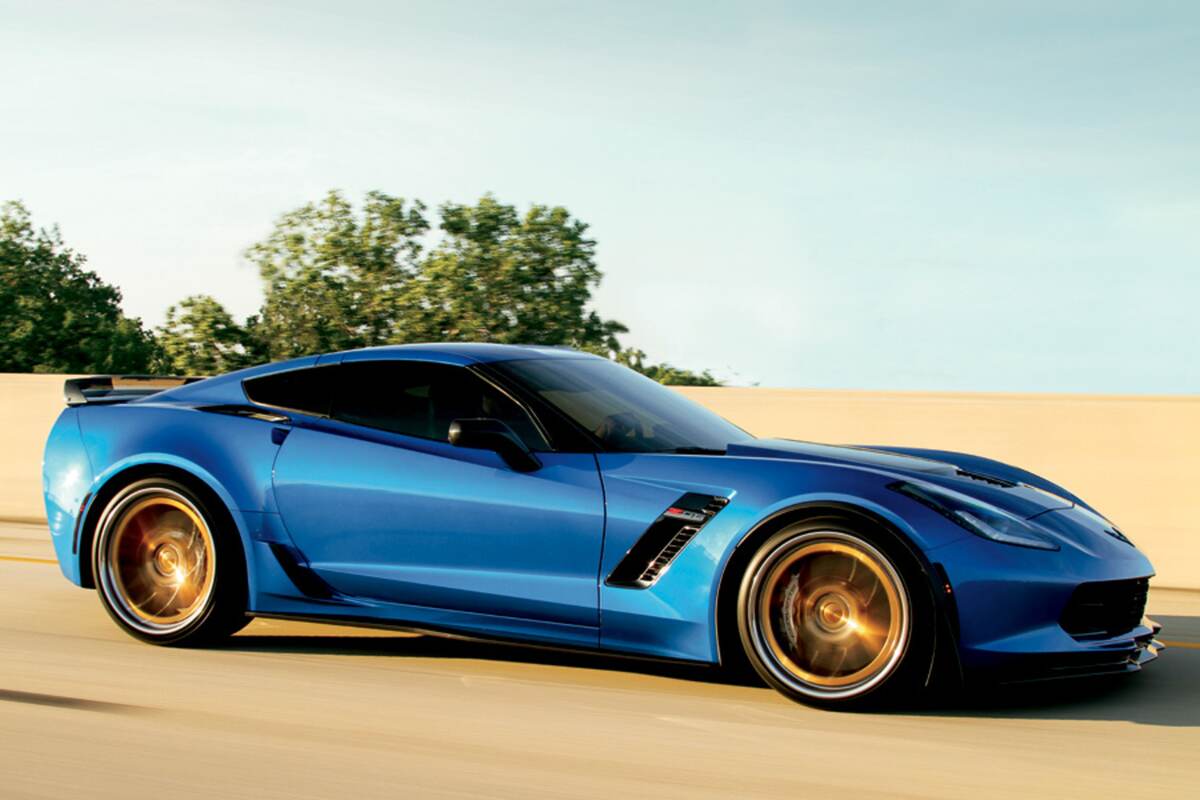 It’s not an overstatement to say the modern Z06 generated a seismic shift in the idea of the Corvette as a serious, track-capable sports car. Sure, the Z51 package dating back to the C4 cars has always offered excellent capability, but it was the C5 Z06 that truly started nipping at the heels of Porsches, and at the psyches of their drivers.

That fundamental change in perception increased exponentially when the C6 Z06 rolled into the paddock. It may not have been the nimblest of supercars, but its reflexes were sharp, controllable and backed up by excellent brakes—as well as the inimitable performance enabled by the 505-horsepower LS7 engine. In fact, it’s almost impossible these days to attend a track day anywhere in North America that isn’t populated with C6 Z06s, and more than a few of those cars’ drivers have defected from German and Italian marques.

The C7 Z06 is poised to continue that momentum, with almost physics-defying levels of grip and stopping power. Nevertheless, making that leap from imports to a Kentucky-built sports car isn’t an easy one, and it’s a change that Peter Zoumberakis has not taken lightly. He’s the co-owner of Smokey’s Dyno & Performance, an Akron, Ohio-based tuning facility with a decided slant toward cars that came out of factories staffed by guys named Giuseppe or Franz, not Steve and Randy. 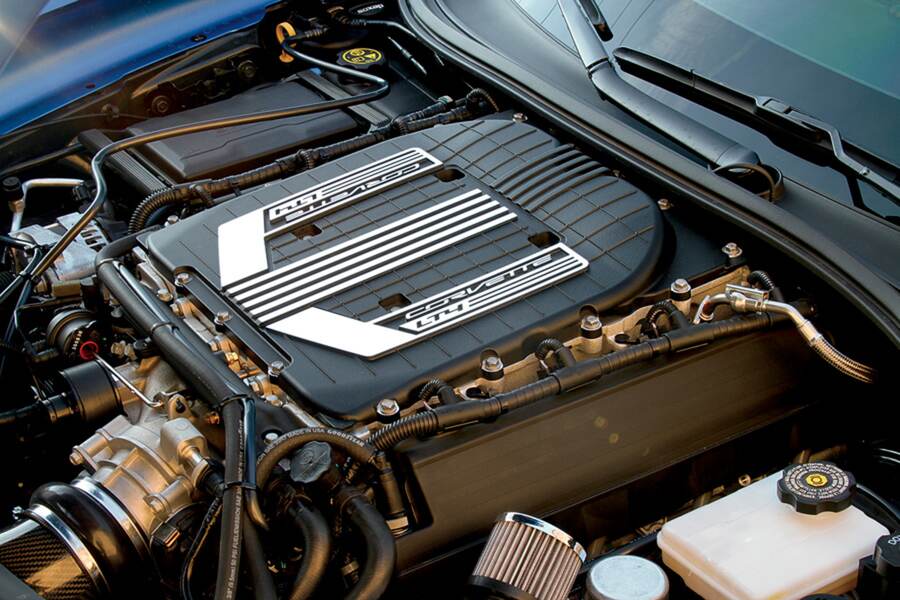 His shop’s website may be littered with images of Ferraris, Lamborghinis and other European cars, but when the rubber meets the road, Zoumberakis is doing it these days in a worked-over C7 Z06 equipped with the Z07 package. It’s the one with the more aggressive aero treatment, 285-series front/335-series rear Michelin Sport Cup 2 tires and 15.5-inch front/15.3-inch rear Brembo carbon-ceramic brakes. And then there’s the thrust generated by the Z06’s standard 650-hp, supercharged LT4 engine. Street cars don’t get more serious, a fact not lost on this recent convert to the Corvette cause.

“The capability of the C7 Z06 is almost unreal,” says Zoumberakis. “The overall performance is amazing, but it’s what the car can do on the track that really blows you away. In fact, your brain will tell you that taking a corner that fast or braking that late isn’t feasible, but the Z06 does it without breaking a sweat.”

As for those carbon-ceramic Brembo binders on the Z07 package? 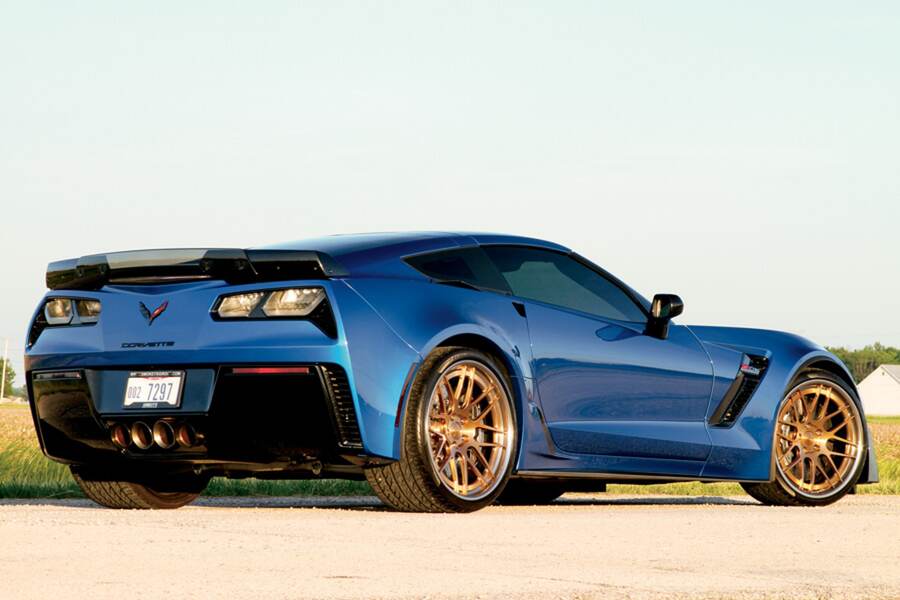 “You have to experience them to believe them,” he says. “You’ve got to be aware of [what is] right behind you, because the car stops now—and you have to be cognizant to keep other cars from piling into the back of the Z06.”

With his unabashed penchant for European sports cars, Zoumberakis admits Corvettes weren’t really his thing until the C7 caught his eye. He bought a Z51 Stingray in 2014 and immediately modified it, adding, among other things, a twin-turbo system.

“It was a really good car on the track [stock], but the turbo system gave it the kick in the pants it really needed,” he says. 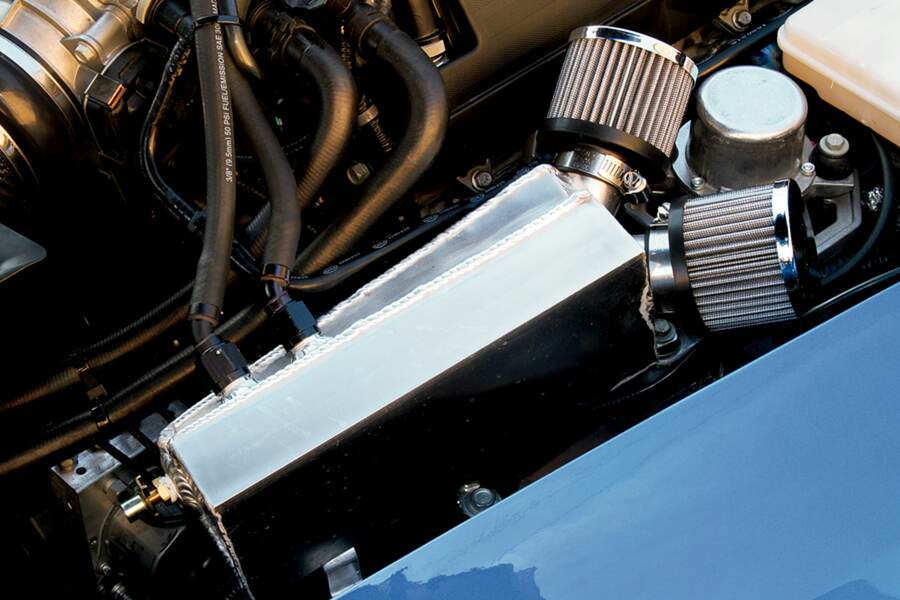 That experience led Zoumberakis to buy a low-mile 2008 C6 Z06, which he also enjoyed wringing out on road courses, but when he learned the specs of the C7 Z06, it was something he knew he had to have.

“It was a twofold decision,” he says. “It was a car I wanted to experience for myself, but I also knew it was a car our customers would be bringing us, so I thought it was important to get as much firsthand knowledge with it as possible.”

Zoumberakis and his Smokey’s team started with some basics, including a Halltech carbon-fiber air intake and Stainless Works long-tube headers with an “off road” X-pipe. The 9.75-quart dry-sump oiling system was drained and replaced with Amsoil synthetic. They also added a custom catch-can/breather system under the hood, in anticipation of a significant jump over the stock 1.7L blower’s boost, but they’re holding back on that for the time being, after experimenting with pulley sizes. 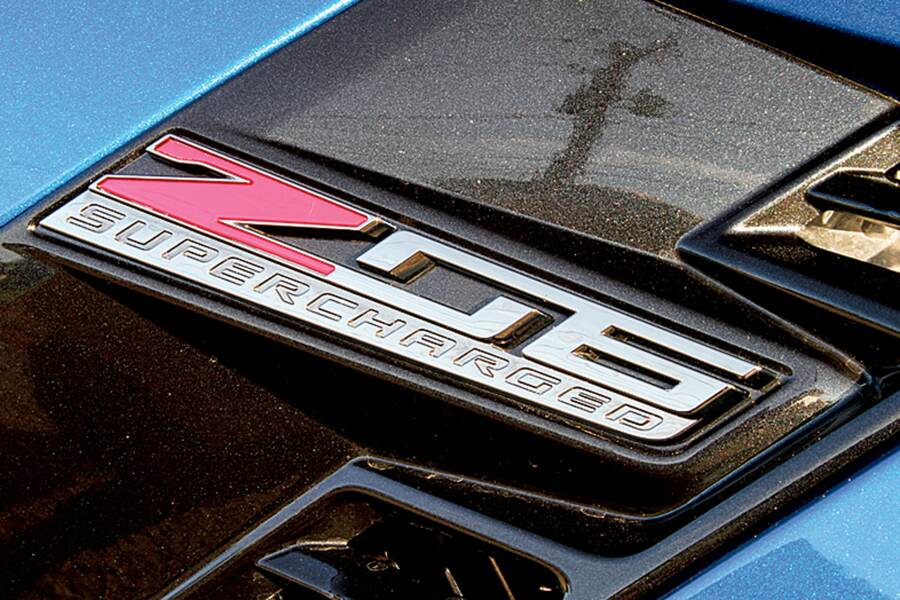 “When we added a lot of boost to the Stingray, we got a front-main-seal leak attributable to the additional case pressure,” says Zoumberakis. “Through our testing, we feel a 2-psi increase in boost is the safest right now, due to the parameters of the blower on the engine. We’ve decided to retain the new catch can/breather system for now, however, as we may need it for our future plans.”

That mild increase in boost comes from a 2.38-inch pulley conversion that, along with tuning, helped the Z06 make 670 rear-wheel horsepower on Smokey’s SuperFlow chassis dyno. That was a solid, 110-horse jump over the 560-rwhp baseline performance. It was a significant achievement that Smokey’s has replicated on other customers’ Z06s, but Zoumberakis has actually changed back to the original pulley on his car, dropping the output by about 50 horses. Why? It was too much power for the track.

“It’s a popular misconception that more horsepower is always the answer,” he says. “If we were building this car for the drag strip or the street, then it would have been just fine, but on a road course, it doesn’t automatically make you faster. Even with those huge, 335-series Cup 2 [factory] tires, we were getting too much wheelspin with 670 rear-wheel horsepower. By backing it off a bit, we are getting much better traction and greater car control.” 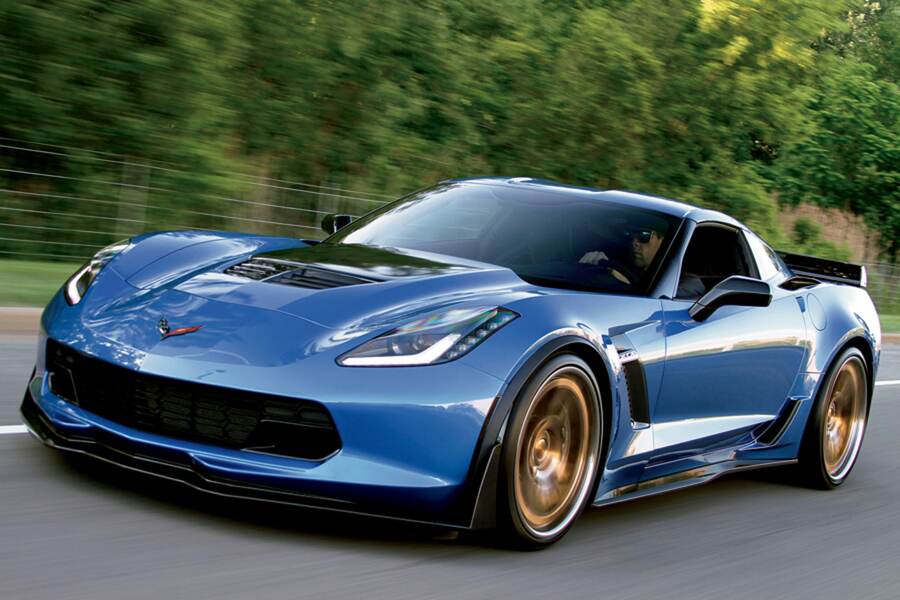 Zoumberakis insists straight-line performance isn’t the car’s strongest suit, but with approximately 700 horsepower at the flywheel, that’s a relative statement. He unquestionably has plenty of power to play with, and notes that the intake and exhaust upgrades really uncorked the LT4 engine.

“After we modified it, it felt like twice the car,” he says. “Letting it breathe is really what it needed. Going with an intake, headers and a tune is really a cost-effective way of making a big, usable gain to any Z06.”

They’re also changes that make it—and there’s no other way to say it—louder. A lot louder. At more than about 50 percent throttle, Zoumberakis’ Corvette sounds like it’s making a flat-out final qualifying lap for the Daytona 500. Some onlookers tend to assume you are racing it and, as we can attest from our photo shoot, subsequently ask the appropriate authorities to investigate. In our case those authorities included a stern, if ultimately sympathetic and enthusiastic, gentleman in a black-and-white Tahoe with strobe lights adorning it from stem to stern. 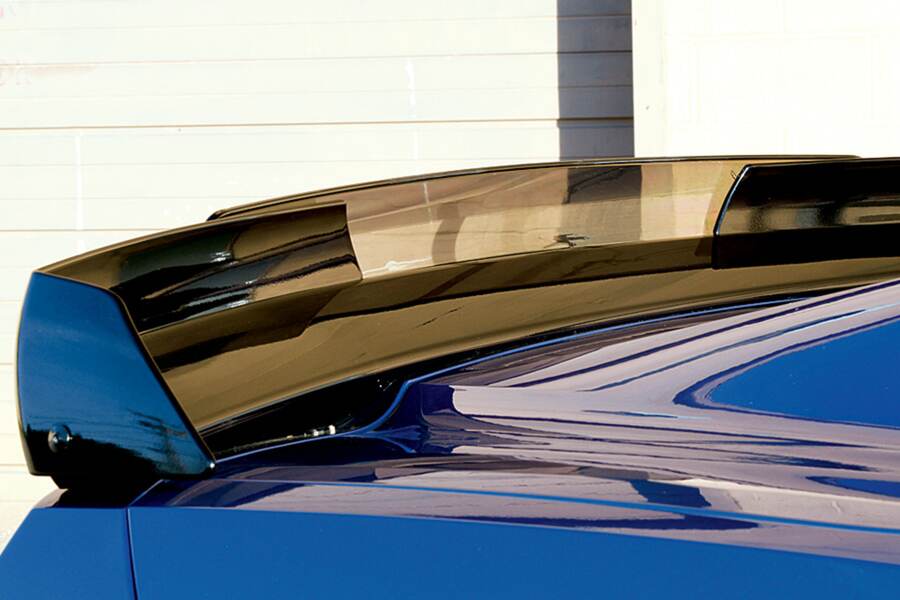 As a matter of fact, an enthusiastic response is not uncommon from police, other enthusiasts and just about everyone else who views the car, with many assuming that it must have originated from the other side of the pond.

“Whenever I pull into a gas station, I’m there for about an extra 20 minutes answering questions,” says Zoumberakis. “Most people can’t believe it’s a Chevrolet, or that such a car comes from the USA.”

We witnessed the phenomenon first hand, after meeting up for our photo shoot at a truck stop south of Toledo, Ohio. The bark of the barely muffled LT4 instantly drew a crowd. The aesthetics of the car unquestionably had something to do with it, too. Along with a slightly lowered stance, the Laguna Blue Vette looked absolutely stunning in a set of Forgeline DE3C-SL wheels with gold-tinted centers, clear-tinted outer rims and black pearl inners. The gold wheel centers complemented the car’s blue color superbly. 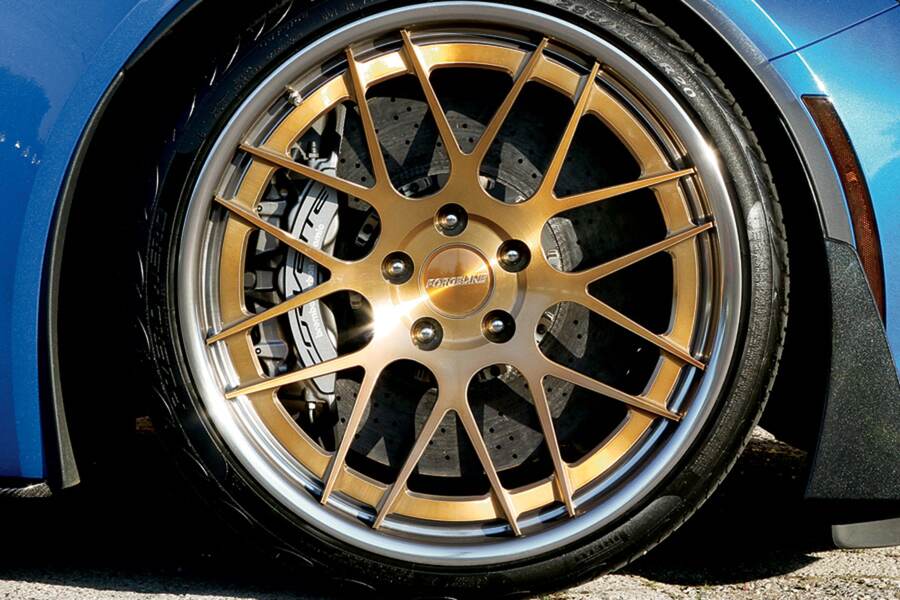 And it’s at the track where this American-bred supercar truly shines.

“After tracking the car at Mid-Ohio, the most mind-blowing aspect…is the brakes,” says Zoumberakis. “I couldn’t get over their brute strength, and how they just kept getting better and better as the day went on. They add to a total experience that I didn’t think was possible from an American car—a combination of power, cornering capability, braking power and style. It is truly an amazing car.” 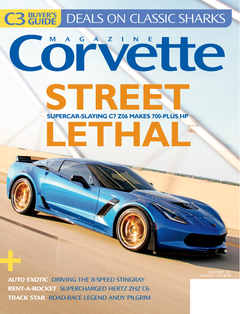