Did Chevrolet harbor much larger ambitions for the original Corvette? One V-8–powered ’53 model in southeastern Michigan provides some tantalizing clues. 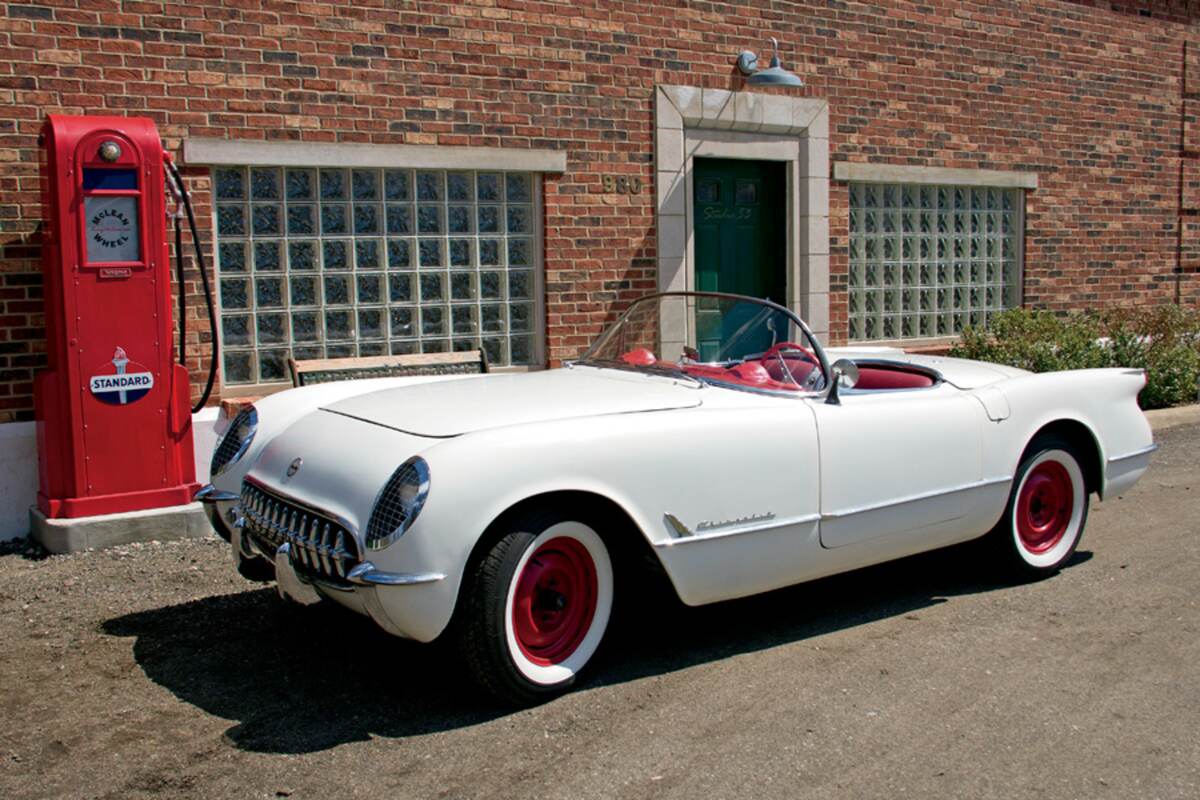 Perhaps more than any other single technology, the small-block V-8 helped the Corvette cross the threshold into serious sports-car territory—and its descendants have kept it there to this day. Chevrolet Chief Engineer Ed Cole had the potential of the small-block in mind from the very beginning, when he claimed the Corvette for Chevrolet back in 1952 after seeing the concept in Harley Earl’s design studio.

While brilliantly designed and engineered with lightning speed by Cole and a team of engineers, the small-block was not going to be available until 1955. So the original Corvettes debuted in 1953 with the heavy, yet reliable, “Blue Flame” inline six that had been the mainstay of Chevrolet powerplants since the 1930s. The need for more power was immediately apparent: early Corvettes furnished barely acceptable performance that was on par with much heavier sedans.

Research into the origins of the small-block Corvette drew us to a particular V-8–powered ’53 model located in southeastern Michigan. The car had been in the same family for five decades and was driven regularly to local car shows and cruise nights. Yet it’s a car that may have played a role in the horsepower evolution of Chevy’s sports car.

Let’s lay out what we know: the current owners of the Corvette, two brothers named Ron and Darwin (they prefer not to disclose their last name), inherited the car from their father, Walter, who died in 2003. Walter was the third owner of the car and was intrigued by where the V-8 came from, and who installed it. That led him to write to the original owner, Harry Dumville, a GM engineering executive. (His official title was director of new devices for Chevrolet.) 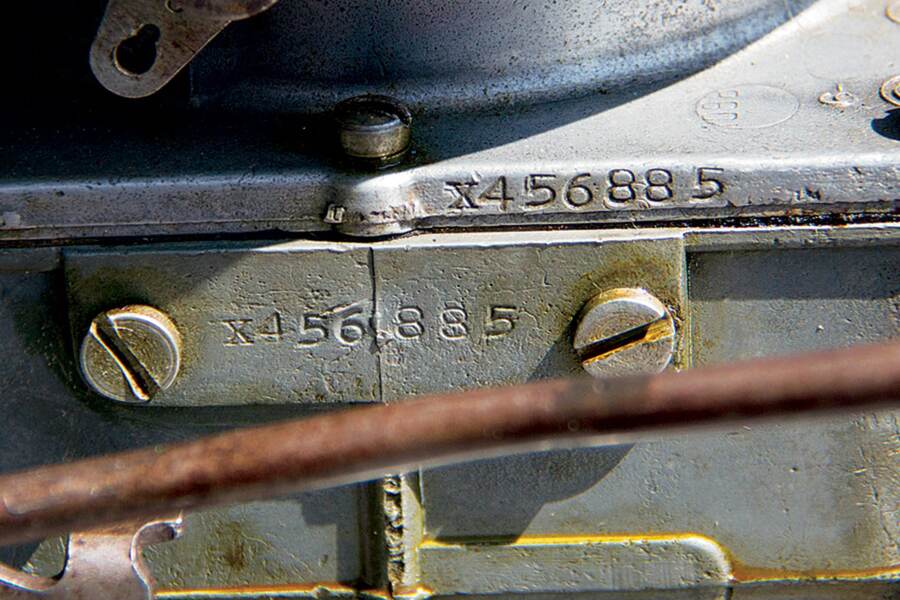 Dumville replied in a letter dated September 20, 1975: “Your letter seems to infer [sic] that you believe this car to be an experimental model with many modifications made by GM or Chevrolet for use on future models. Such is definitely not the case, as it was a stock ’53 Corvette purchased by me through the Corporation and modified by me as part of an effort to convince Bunkie Knudsen and Ed Cole, general manager and chief engineer of Chevy, respectively, that if they wanted to have a competitive sports car, several changes were needed, not the least of which were more power and a four-speed manual transmission.”

(Dumville mistakenly identified Knudsen as the General Manager of Chevrolet at the time. Thomas Keating actually held that position until 1956, when Ed Cole assumed control of Chevrolet. Knudsen was at Pontiac in the mid 1950s and did not come to the Chevrolet division until 1961.)

In the letter, Dumville described taking delivery of E53F001123 on November 7, 1953, from North Chevrolet in the Detroit suburb of Birmingham, Michigan. The body was built at the Parts Fabrication Section of the GM Engineering Staff/GM Tech Center where Dumville worked. It was equipped with the usual six-cylinder/Powerglide pairing (#LAY 512503), which he ran until sometime in 1955.

Dumville went on to ice-race the car on some local lakes in Oakland country northwest of Detroit. But it wasn’t long before he decided to install a V-8 engine with a four-speed transmission.

By calendar year 1955, the small-block was essentially the only engine one could order in a Corvette, with the exception of a handful of Blue Flame sixes. And the only available transmission was the two-speed Powerglide automatic, even though a three-speed manual was listed in the base price. (The three-speed did become available on a limited basis later in the year.) 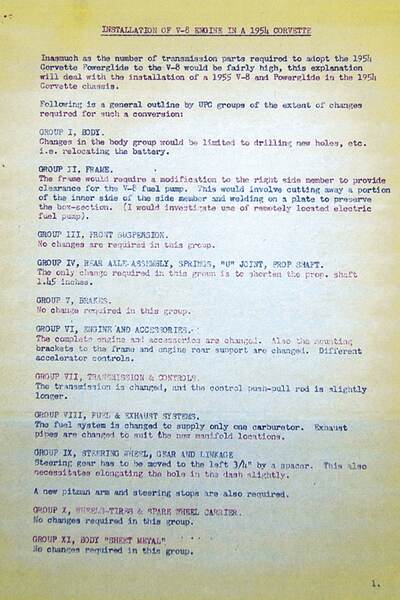 “Since the Powerglide-equipped cars suffered from brake-fade problems in any races or time trials, I decided to replace the engine and transmission during the winter of 1955 with a 265-ci V-8 with two four-barrel Carters,” wrote Dumville. “This was a test engine I obtained through Chevrolet Engineering. “

Sure enough, the engine block has a 7-27-53 casting date, and the Delco-Remy ignition distributor has an “Engineering Sample” tag riveted on it.

The engine swap was relatively simple, but the new manual transmission took a bit of work. “I designed and machined a wedding ring to couple this engine to a four-speed transmission from a Bentley 4.5-liter,” wrote Dumville, “which I had acquired because it was a reasonably close-ratio box of four speeds. Fourth was a 0.8 overdrive, so I had to put in an axle of about 4.3:1.

“I did not keep this in for long, as the torque was a bit high for the box and also because…I was able to get one of the four-speed boxes used on the Sebring cars and provided [to] some of the stock-car racers. This enabled me to handle the torque and get back to a lower axle ratio, the combination you probably have in it now. I don’t remember the ratio, but after installation of the box and axle carrier, Henry Bohler, then [the] resident Carter man, set up the two carburetors for me. We then made a few runs with a fifth wheel on the five-mile straight at the Proving Grounds and recorded 134 mph, so it would go.

“I did all the engine swap work myself,” continued Dumville “and designed the exhaust system using two three-and-a-half-inch stainless steel mufflers packed with Fiberfrax, a Carborundum Co. refractory wool, and exiting just ahead of the rear wheels. I understand that Mr. Lane [Bill Lane, the car’s second owner] foolishly disposed of these, probably for something more quiet, I suppose. 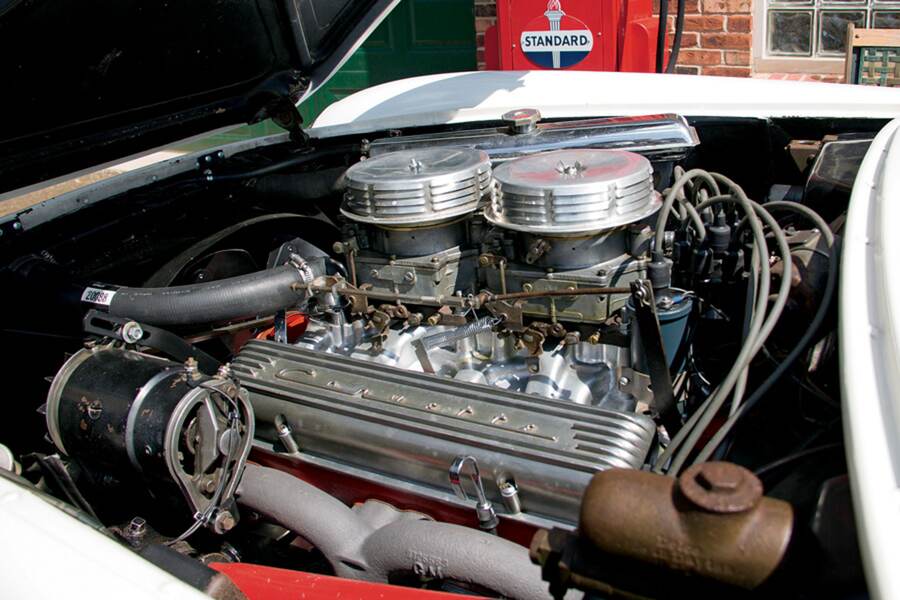 “I also replaced most of the instrument gauges with Stewart Warner types that I could read. I removed the radio because of interference problems with the new engine, and put in a pair of electric fuel pumps with [a] selector switch in case one failed. I believe I also replaced the steering wheel with a later and better-looking type. I also had a hard top. I have forgotten the make, but it was the only good one at the time.”

One person whom Dumville did not have to convince regarding performance improvements on the Corvette was Zora Arkus-Duntov. A staff engineer at Chevrolet R&D reporting to Maurice Olley, Duntov was quickly adopting the Corvette as his baby, whether he had the real authority

“I really don’t know about the camshaft,” wrote Dumville, “but Zora Duntov was with us at the time, and since the 265 engine was a prototype for future Corvettes, it was no doubt his design.” 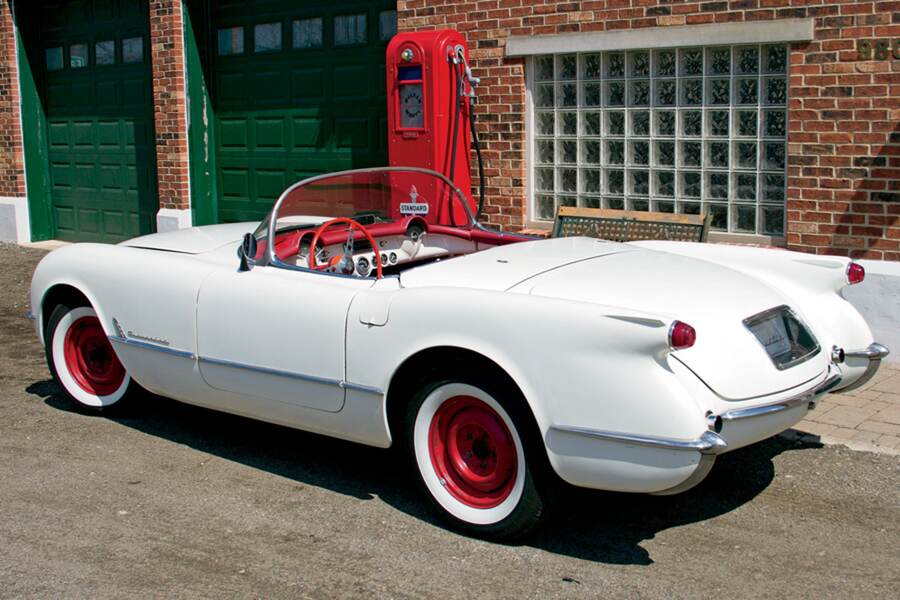 Dumville’s son Spike notes that his father did much of the work, though he is not sure where it was actually performed.

In a subsequent search of the GM Heritage Center archives, we came across a memo, presumably written by Duntov, laying the groundwork for a “Super Corvette”:

This is [a] proposal to develop an experimental “Super Corvette” based on V-8 RPO 1955 engine.

The project will serve several purposes:

1. To acquire positive and advanced knowledge, part of which may be applicable to the normal or future production cars, trucks or whatever production Chevrolet may use it [sic]. 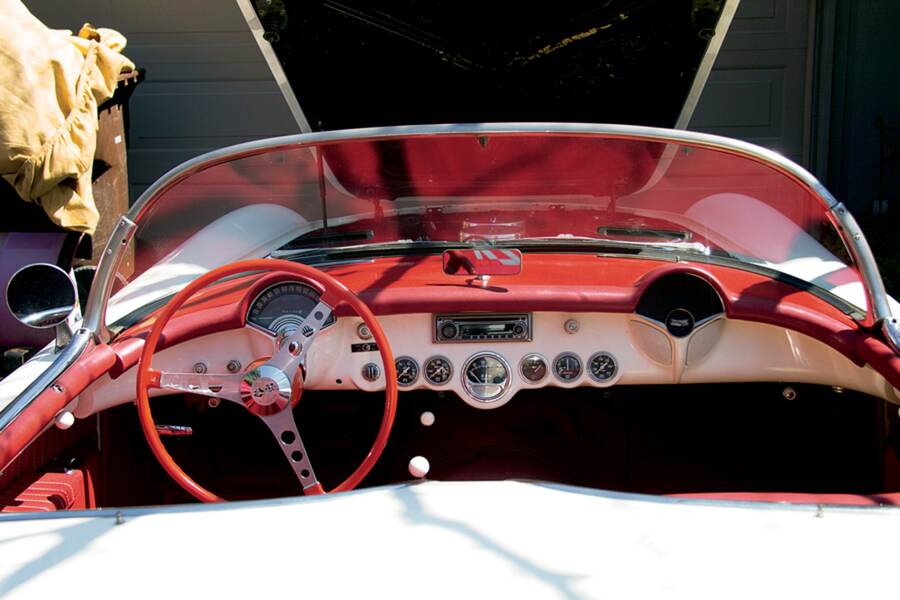 2. To have a target car for a production Corvette. Once the car is there, it can be judged.

3. To cash in on publicity value which “faste[st] sports car in the world” can bring.

4. To give Chevrolet car and truck owners more than they have paid for—additional pride of owning a Chevrolet.

Duntov had something more in mind than just a V-8 Corvette. He went on to introduce a theme that would later bear fruit in the Grand Sport program: “Super Corvette based on RPO V-8 engine with extensive use of light metal.” Here the author had in mind an aluminum casting for the Powerglide automatic and differential casing. But he also mentioned “light metals as structural material for engine and some chassis components.” 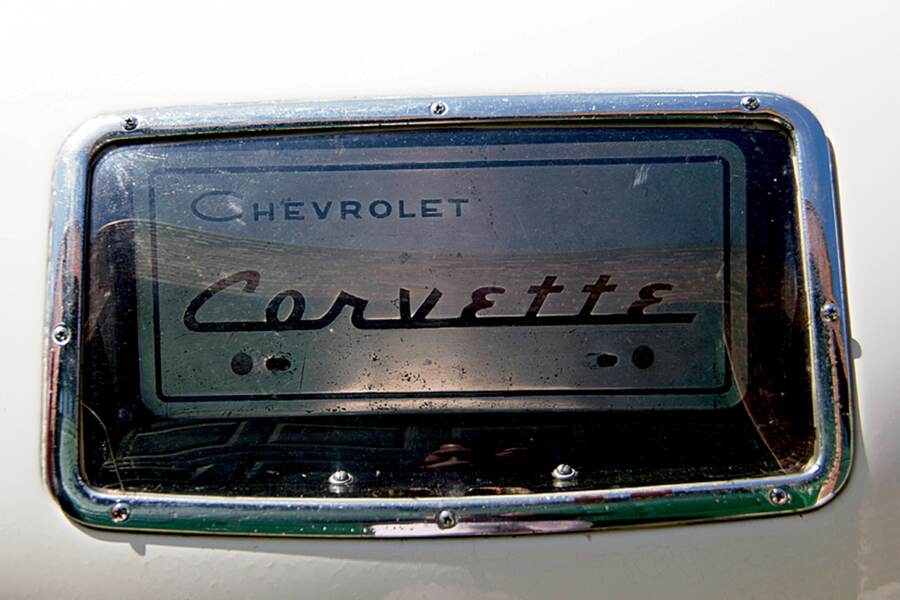 2. Component developments which may be beneficial for Corvettes and passenger cars.

In closing, Duntov suggested that “a Super Corvette based on V-8 RPO 1955 engine can be a target. The slide rule potential of V-8 RPO engine is such that the car will be capable of spectacular feats. Car for production Corvette with most of the answers.”

We don’t know if Duntov ever acted in any official capacity on these recommendations, or if this memo draft was ever sent. But at a minimum, the document gives us an insight into his thinking at the time, and it makes clear that he was already thinking about the next step beyond the standard small-block V-8. 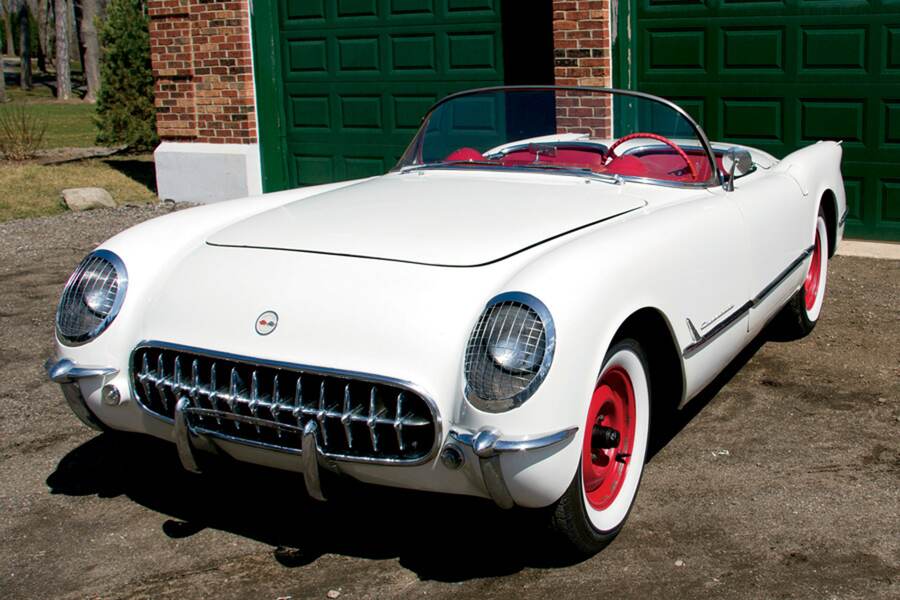 It’s important to remember the fraught atmosphere in which Duntov functioned. While Cole and his team were very proud of the small-block V-8, there was some opposition within Chevrolet. After all, the Blue Flame six had contributed greatly to the company’s ability to outsell crosstown rival Ford, which was still largely reliant on the Flathead V-8. Duntov also sensed that Cole was still regarded by many as a young upstart, and when the small-block started eating bearings during early testing, smug comments multiplied among the naysayers. That would change, as the production small-block and its descendants went on to forever alter the automotive performance landscape.

Walter obtained the car in 1965 and took it apart with the help of his sons roughly two years later. After that, the disassembled Corvette sat in his garage for the next two decades. They performed a mild restoration the mid ’80s but were careful not to change any of the modifications made by Harry Dumville, other than to swap the engine for another, less historically significant V-8 to use for driving around. Since then they have reinstalled the twin-Carter engine. “We’ve never driven it any further than 50 miles from the dealer in Birmingham where it was delivered,” says Ron.

There is one other interesting detail about this car: it has an original brushed-steel license plate, engraved with the words “Chevrolet Corvette.” The plate is identical to the plates used on the original Motorama Corvette. How it got there is anybody’s guess.

Additionally, when the boys went through their father’s paperwork on the car, they found a Chevrolet Inter-Organizational Letter to Dumville from someone named M. W. Dixon, who worked in the Chevrolet Central Office. Attached was a two-page report outlining the changes that would be required in order to install a 1955 Chevrolet V-8 engine in a ’53 or ’54 Corvette. The letter was dated February 24, 1955.

So what do we make of this car? What is its provenance? Is it just one man’s hot rod, or is it one of the many engineering projects that once regularly took place within GM? Equipped with a prototype V-8 engine, installation documents from Chevrolet and top-speed recordings taken at the GM Proving Grounds, it seems to have been a bit of both.

Whatever its origins, this small-block–powered ’53 furnishes more evidence that the Corvette was always in good hands, that engineering and design passion would ensure its survival during those delicate early days. For that reason and many others, Ron and Darwin clearly have a car that’s worth holding on to. 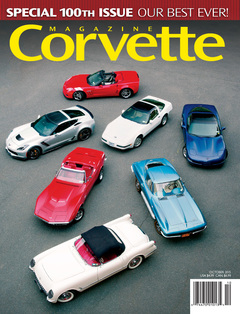